Recently Patrick sent me a link to the trailer for Dark Waters and wrote, “The magic happens at 0:08.” That magic, it turns out, was Mark Ruffalo’s character driving a tan T130 Toyota Corona Liftback. I didn’t really think anything of it, but then a few weeks later the trailer for Just Mercy drops, and Michael B. Jordan’s lawyer character is driving — you guessed it — a tan T130 Toyota Corona Liftback.

Dark Waters is based on a true story about a corporate lawyer flips sides to help farmers in a small West Virgina town fight DuPont for poisoning their livestock (and, as it turns out, every other thing on Earth). “It’s set in 1998,” Patrick said, “But for some reason, the main character drives a 5-door Corona.”

Presumably, the Toyota happens after Ruffalo decides to bail on his corporate lawyer gig. Here is a photo of him looking very forlorn in his old ‘Yota. Hey, at least it’s not the stripper model; it has a rear wiper, after all.

Just Mercy, also based on a true story about a young lawyer trying to free a man wrongfully imprisoned for murder in Alabama, follows a similar pattern. Michael B Jordan plays the lawyer and his car, too, has the rear wiper option. The events in Just Mercy take place in 1988 so the Corona, built between 1979-82, makes more sense. And, in the scene where Jordan pulls up to a prison there’s an E90 Corolla and an unmolested S13 240SX coupe. Accurate! 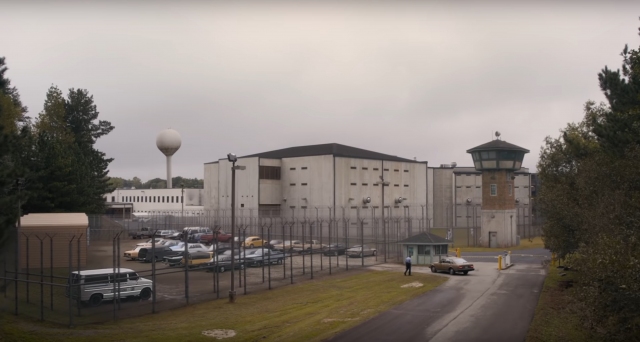 I’d be surprised if these weren’t the same car, since I think I’ve seen fewer than five T130 Coronas in the wild over the last decade. I’m thinking both productions sourced the Corona from the same picture car company. After scanning their inventories, they probably thought, “Hey, this is what a lawyer who’s not in it for the money would drive.” Don’t feel bad, Corona owners. There are worse things for your car to be associated with than honorable fights against The Man.

Journalism rules state that there have to be three instances of something happening for it to be a trend. I can’t possibly keep up with all the legal dramas in film and TV, but if anyone else notices this Toyota Corona Liftback pop up somewhere else, be sure to let us know.

permalink.
This post is filed under: JNC Theater and
tagged: corona, t130, toyota.