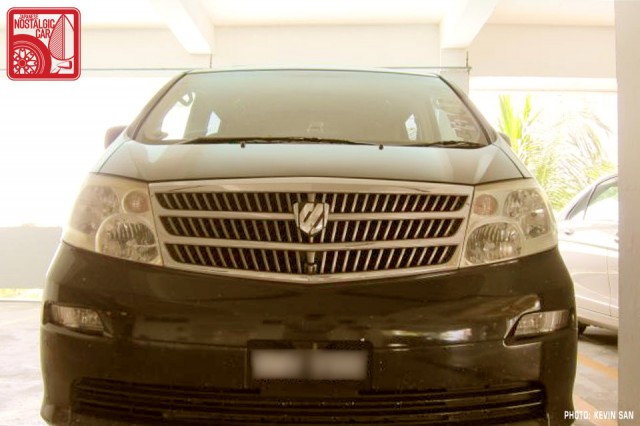 No, you haven’t traveled into the future. The Toyota Alphard isn’t nostalgic yet, but to ignore them would mean turning a blind eye to a huge part of Japan’s car culture. Custom minivans are serious business in Japan and the Toyota Alphard (along with its twin, the Vellfire) is the king daddy of them all.

Ten years ago the Tokyo Auto Salon, that circus of Japanese tuning culture, was filled with Silvias, Savannas and Supras. Now it’s mostly vans and luxury sedans with a sprinkling of neo-hachirokus. Instead of J’s Tipo we now have StyleWagon and Wagonist. What happened?

JNC‘s resident historian Ricky Silverio offers one explanation: Dudes who spent the 80s and 90s modding Skylines and Soarers have grown up. Yes, we thought their shakotan sleds and Wangan missiles were so cool and impervious to the effects of old age, but families happen. Even the coolest guys settle down, have kids, and VIP vans are an extension of that culture in a family-friendly form. Hey, at least they’re still doing something interesting with cars.

Plus, Japan is crowded. Many vans are nicer (and about as spacious) as your typical Tokyo apartment. Japan’s roads are smooth as ice, packed with traffic and petrol is expensive. Why not float through the city in your mobile lounge instead of a gas guzzling sports car or SUV?

We recently borrowed a Toyota Alphard for a few weeks while on holiday in Malaysia. It was a JDM import, a pre-2005 facelift model complete with WALD badging, so it might have been one of ToMoCo’s countless limited editions when it was new. The front bumper looks like it’s been replaced, and so I wouldn’t be too surprised if it was born with a bodykit, which has subsequently succumbed to the Malaysian rough roads, and was replaced with stock parts.

She’s an oldie, the first-gen version with the old 3.0 liter, 190-horse V6 and 4-speed automatic. I guess that would put her at about 10 years old or so. The odometer shows 200,000km (124,274 miles) and she feels pretty tired, but being a spawn of Aichi, everything still works! Well…mostly everything.

This was the full-bling version at the time, so it has lots of weird features. The “Room” button turns on some cool mood lighting. Power side doors are mandatory, of course, and the button to the extreme left says ‘AC 100V’. But instead of charging the air con with ONE HUNDRED VOLTS when you press it, it just turns on the AC power points in the back of the car. So you can not only plug in a Playstation, but you can also hook it up to the rear cabin DVD screen.

Speaking of weird features, the steering wheel has a strange button showing an overhead pictogram of the car with two triangles coming out of it. This activates the front cameras implanted in the grille. It’s not a very useful feature, as the camera views look 90 degrees to the left and right of the bumper (and if you select reverse, is overridden by the reverse camera view). In Japan, where you have those narrow garages, it might help you check for oncoming traffic as you drive out.

In the back, you can plot your latest JNC comments in reclined comfort, complete with adjustable footrest. Third-row passengers are well taken care of too, but arguably the coolest/most useless feature is the electric curtains!

The curtains on the tailgate are a bit sticky, since some of the plastic hooks on the bottom track have been broken. In fact it’s not a very practical feature; the seatbelts rub against the curtains and you have to load the trunk carefully to not damage the mechanism.

To drive, she certainly feels bigger than my own Estima, and her bigger bones are a bit of a challenge for the little Camry V6. Toyota countered this with a nice and loose converter, so initial step-off is quite good, and low gearing keeps the V6 spinning. In fact, at highway speeds the 4-speed is pulling about twice the rpm as our 3.5L Estima with the 6-speed.

The shocks have Comfort and Sport settings, but after 200,000km they aren’t putting up much of a fight anymore. On Comfort, it’s all a little queasy. Sport stiffens it to more of a “normal” feeling. Overall, notwithstanding all the creaks and rattles, the Alphard feels like a more expensive and refined ride than our Estima. We were excoriated for praising the Toyota Sienna SE, but it is similar, and would be an absolute head turner in Japan.

Import duties are 300% in Malaysia, so a new one is expensive, with the V6 costing about $150,000 and the four-banger priced at $100,000 USD. Still, they are extremely popular, notwithstanding the fact that the sat-nav doesn’t work and the head unit is all in Japanese.

Their popularity is due to some very Malaysia-centric factors. Malaysian culture is that most middle class families will have a live-in nanny or maid, and cheap labour from neighboring countries (Burma, Cambodia, etc.) mean that it’s very affordable. It’s also a necessity for many families as working hours are long, and the commutes equally long due to the choking traffic. So if you have a few kids, then your family truckster has to be big enough to haul your nanny (and possibly your maid as well). The other reason is that everyone perceives crime to be a big problem, so wealthy families will need the extra seats for a driver/bodyguard (plus maid/nanny).

I liked it so much I think I might get one. Well, maybe not an Alphard, but a 3.5-liter Vellfire Z with the 8 seat option is looking like a boss ride. The Vellfire just got approved for import into Australia, so this is on point for me.