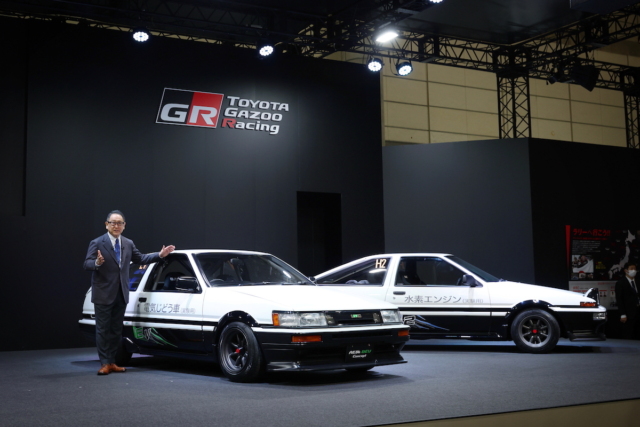 The rumors we reported on were true. At the 2023 Tokyo Auto Salon Toyota did indeed unveil two AE86s converted to run on alternative energy. A flip-up headlight Sprinter Trueno was converted to hydrogen power, and a fixed-headlight Corolla Levin was converted to a fully electric power. “There are lots of people at the Auto Salon who want to enjoy car life with their favorite cars,” said CEO Akio Toyoda, “I hope to dismiss the fear that we won’t be able to drive our beloved cars when we go carbon neutral.” 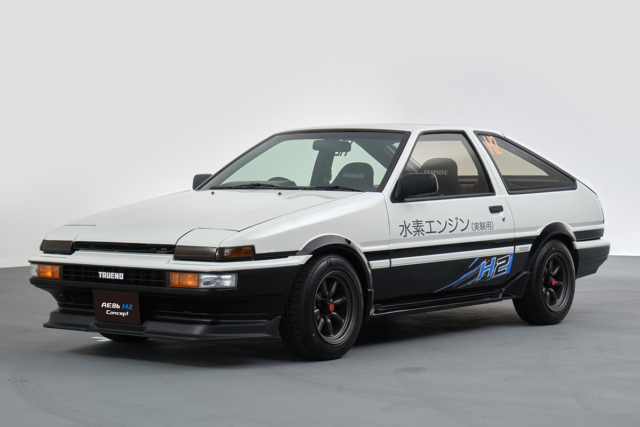 The Hydrogen Hachiroku isn’t powered by a fuel cell. Instead, it burns hydrogen with a conventional piston engine. Toyota’s been experimenting with hydrogen combustion in much-hyped a GR Corolla race car campaigned in Japan’s Super Taikyu endurance series. It was thought that the H2 car would be powered by the same engine. 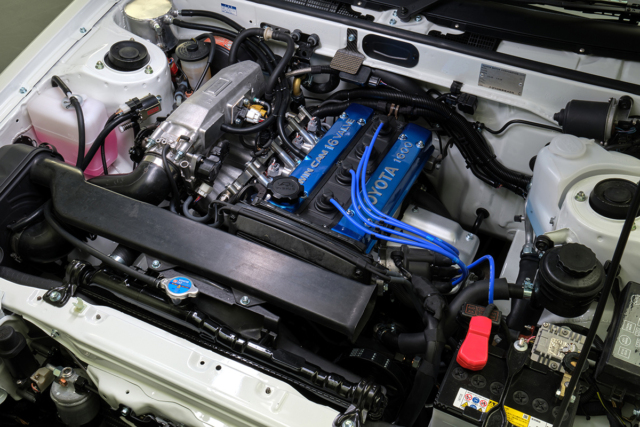 But, surprise, Toyoda-san revealed that the AE86 was actually converted to hydrogen using the original 4AG motor! I interviewed chief engineer of the GR Corolla hydrogen race car Naoyuki Sakamoto in 2021 and he told me that existing internal-combustion engines could be converted to use hydrogen fuel as long as the fuel injectors, fuel delivery system, and fuel tank were modified. No modification to internals were necessary. 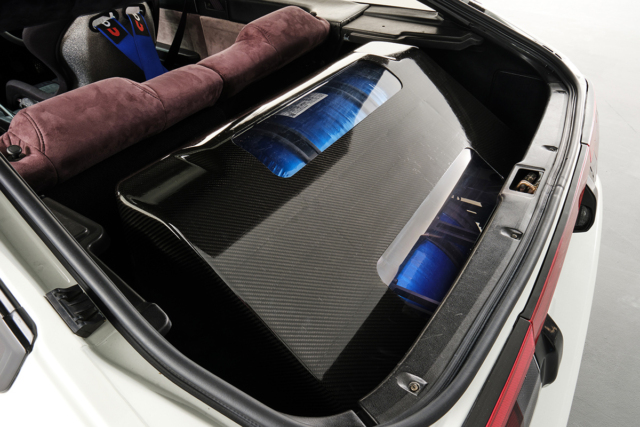 Unfortunately that tank of hydrogen fuel takes up the entire trunk, though it does have a snazzy carbon fiber cover. It takes much more hydrogen fuel to travel the same distance as gasoline, as it turns out. At its initial Super Taikyu race of 2021, the GR Corolla could only run about 10 laps before it needed to refuel, and that car had four hydrogen tanks in the trunk. 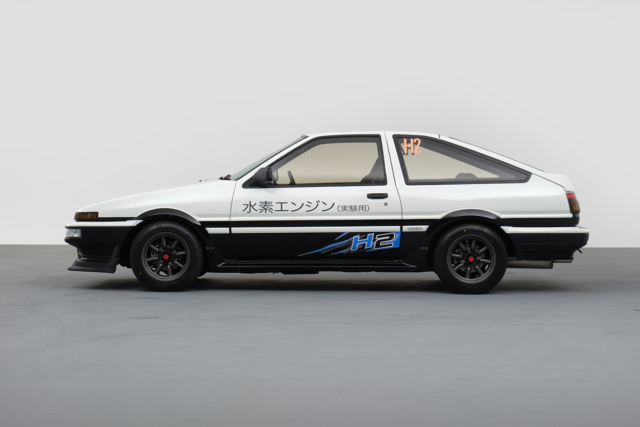 There is some hope, though. In one year of campaigning the GR Corolla, Toyota has improved the engine’s efficiency significantly. By season’s end engineers had increased its range by 30% over the season. They also managed to bump horsepower by 24 percent and torque by 33 percent, putting those figures on par with gasoline engine equivalents. Refueling time was improved as well, from about 5 minutes to 90 seconds. 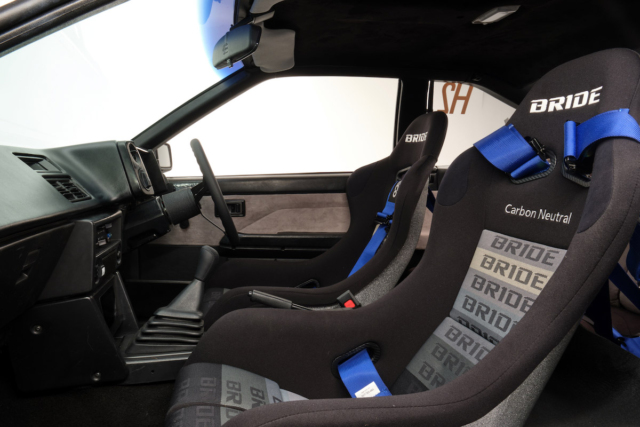 Drivers of the GR Corolla reported that the H2 race car drove pretty much like a gasoline-powered car, but since hydrogen burns faster the throttle response was improved. And because the car had minimal modifications, the interior remained largely unscathed. 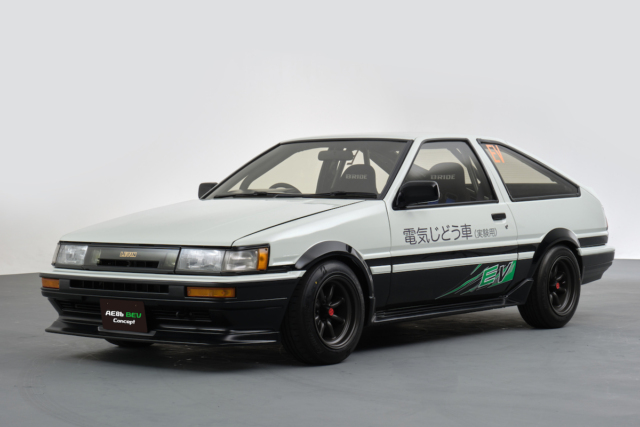 The same can’t be said for the Corolla Levin electric conversion. The battery pack takes up not only the entire trunk, but the rear seats as well. Both conversions would seem to have some negative effects on handling, but the heavy battery pack looks to be quite a bit heavier. Toyota left most of the interior gutted as well. Why did the Sprinter get hydrogen while the Corolla got batteries? It’s all there in the name: Corolla LEVin.

Amazingly, they kept the T50 5-speed manual in tact. Apparently this was one of the reasons Toyota was developing a stick shift for electric venicles. In the Lexus prototype it was all software, but realistic enough that it would even roll backwards on a hill and stall if not operated smoothly.

In a development video, Toyota showed how the two cars were converted. Towards the end driver Masahiro Sasaki (more on him in a bit) takes each car onto a track. He’s definitely able to push the EV more, and it appears to have some kind of recorded engine noise played in the cabin as the car accelerates. 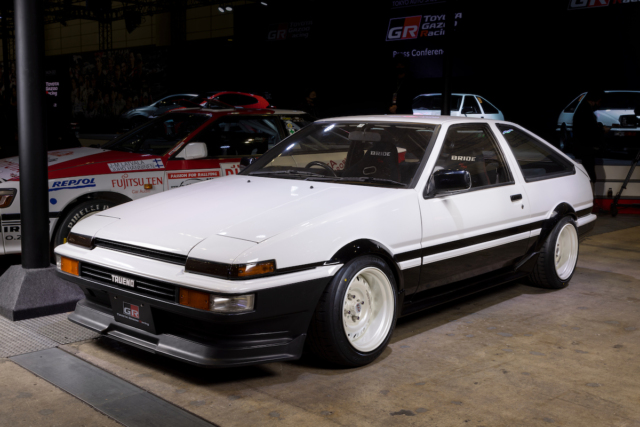 Perhaps the most heartwarming thing about Toyota’s TAS presentation was the revelation that so many leaders within the company drive AE86s. In addition to the converted cars, Toyota also displayed the personal Sprinter Trueno of Masahiro Sasaki, seen here sporting Bridgeston RAP wheels.

Sasaki is one of Toyota’s development drivers, responsible for cars like the new Toyota 86. He also races for Toyota in SuperGT and at the 24 Hours of the Nürburgring, and drives the GR Corolla H2 race car in Super Taikyu. According to Akio Toyoda, “This AE86 was the master that taught professional driver Masahiro Sasaki, and was restored so that he could always return to his roots.” 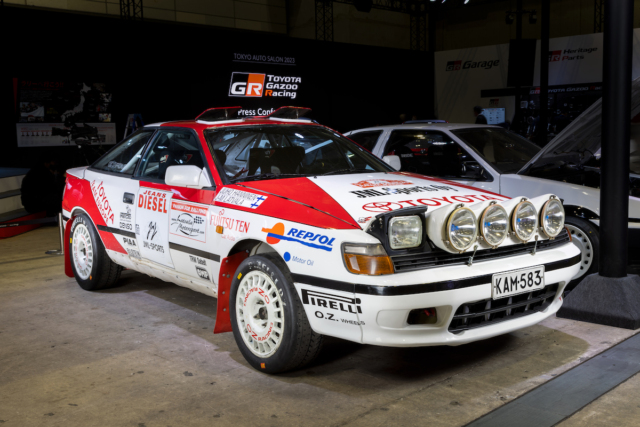 Sasaki wasn’t the only one. Koji Sato, president of the Gazoo Racing division, also recently acquired an an AE86 Corolla Levin. Akio Toyoda gently ribbed him for not having it ready for the Auto Salon. It was in the midst of a restoration, Sato explained.

Last but not least, Toyota also showed off a ST165 Celica GT-Four, the same car that won the WRC Rally Legends race earlier this year.

A video of Akio Toyoda’s presentation in full. 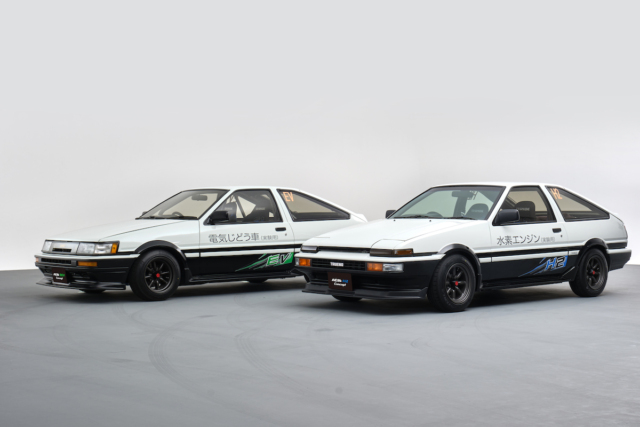 There’s a lot to be said for these AE86 conversions. One of the biggest negatives about driving an electric car (or modern cars in general) is that all of them are also throttle-, brake- and steer-by wire. These negate the driving feel and road feedback that make classic cars so enjoyable and fun.

Pairing a new school powertrain with an analog driving experience might make die-hard enthusiasts less resistant to the change. We can either fight the tide or go with the flow. At least Toyota is presenting some options to keep our vintage machines alive.