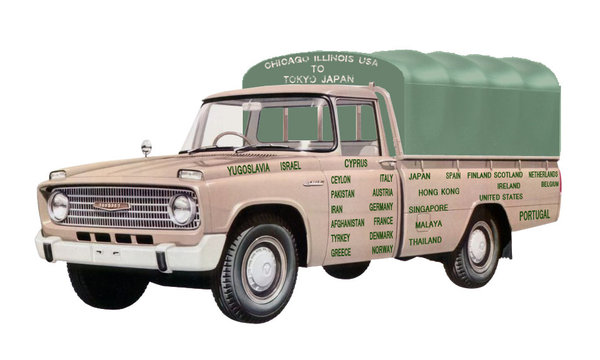 Ivan Shkirev knew that the 1962 Toyopet Stout he had purchased was unique, but not how unique. Upon receiving delivery to his home in New Mexico, Shkirev found the faded declaration “Tokyo, Japan to Chicago, Illinois” painted across the Stout’s tailgate, along with the names of various countries that it had apparently visited decorating its flanks. 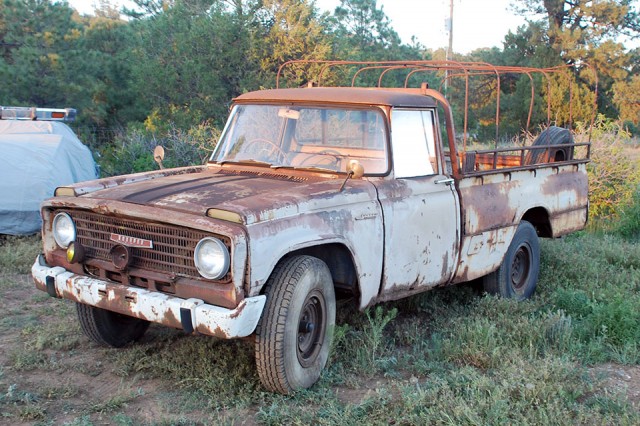 In a storage space underneath the front seats, Ivan found 1960s maps of Afghanistan and Pakistan and a stockpile of spare parts. The car had seemingly traveled from the Japanese capital, across southern Asia, and through most of western Europe before arriving in Chicago.

In the Sixties, it was common for Japanese automakers to drive cars long distances to highlight their durability. In 1964, for example, Toyota took the then-new barikan Corona on a continuous 100,000km test back and forth on Japan’s first expressway. In such marketing campaigns the cars would often be decorated as they toured the country. Take the instance of the 1960 Nissan Bluebird 1200, which journeyed across Japan, adding the signature of each prefectural governor as passed through their districts.

After some research, Shrkiev found that the Stout was once part of the Lee Roy Hartung collection and contacted his widow. She told him the story of a newlywed couple that had flown to Tokyo, bought the truck, and taken a two-year honeymoon around the world. Hartung apparently knew the owners and the Stout was gifted to him some years later.

When Hartung passed away in 2011, his eccentric collection of what seemed like scrap was auctioned off for over $4 million, but there were apparently no takers for the Stout. It was donated to a local scrapyard. Fortunately, the owner decided it was too unique to crush and sold it to Shrkiev, who described his story in the Chicago Tribune.

We contacted Ivan, and as it turns out, he is a JNC reader going by the name elevenRussians in the forums. He’s a huge Toyotaku and owns a host of RWD Celicas, Corollas, and an RN12 Hilux as well. He said of the rare, dual-headlight Stout: “It definitely has a very interesting story, starting its journey as a low production (I heard they made less than 2000 of this model) underpowered vehicle and traveling through most of the world carrying honeymooners.” 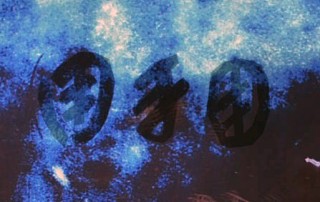 Ivan’s also discovered some additional clues. “Each door of the truck has three [kanji] symbols which we were unable to identify. I included the best contrasted image with outlines.”

“My goal is to restore it and take back to Tokyo. I hope that featuring it on JNC will help.” You can see more of the restoration project on Ivan’s website, RK45.org. If anyone has more information on this peculiar honeymoon celebration, please let us know.