Tomica Returns to US Market, Featured at JCCS 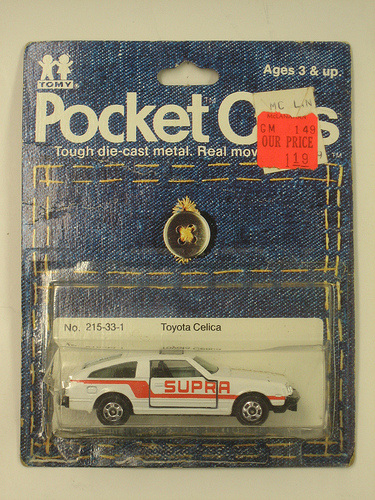 JNC readers of a certain age will remember pegs at Toys R Us filled with Tomy Pocket Cars, highly detailed diecast models blister packed against a denim background. They were the US brand name for Tomica, Japan’s most popular line of toy cars.

Arriving in 1974, Tomy initially figured kids probably wouldn’t really care what kind of cars they were playing with so they simply offered what was available in Japan —Japanese cars. Turns out, kids cared a lot about which makes and models they were smashing up on the kitchen floor and sales lagged behind Hot Wheels and Matchbox. Keep in mind, this was years before the average American had heard the words Nissan, Mitsubishi or Subaru. Tomy eventually added Corvettes and Lamborghinis to the mix, but only lasted until 1987 in the US market.

Now, 23 years later, they are making a comeback! The Tomy USA website has only two items for now, but the company promises licensed cars from Toyota, Nissan, Mazda, Subaru and more. And if you are going to the Japanese Classic Car Show this Sunday, they will offer an exclusive look at their upcoming products.

For a trip down memory lane, visit Tomy Pocket Cars.

9 Responses to Tomica Returns to US Market, Featured at JCCS