Since Tomica‘s sponsorship of Masahiro Hasemi‘s actual Group 5 R30 Skyline Super Silhouette back in the early 80s, the insanely be-winged racer has been replicated in countless forms. The latest iteration will be released this May in Tomytec‘s Tomica Limited Vintage Neo lineup and — with full interior, bespoke wheels, and a removable nose just like the real thing — promises to be one of the most detailed 1:64 scale model cars ever made. 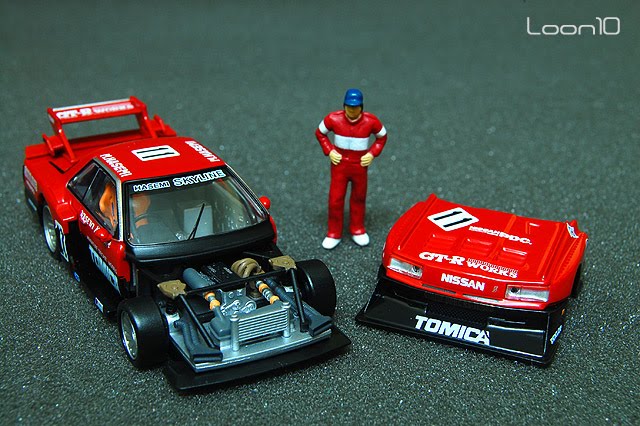 In 2009 TLVN issued a similar model of the 1984 Skyline Super Silhouette, and here’s what it looks like with the engine cover off. For those of you not in tune with diecast scales, this is about the size of your typical Matchbox car. For more images, check out DiecastLife.

However, that version had the radially-finned SSR meat slicer wheels that gave the 570 PS monster a modern, 1980s aero look.

We prefer the raw, old school look of the 1983 car and its old school gold mesh with polished lips.

Sometime in between, Tomica also produced Haruhito Yanagida‘s 910 Nissan Bluebird Super Silhouette racer, in both red 1982 and white 1984 Coca-Cola livery. Endearingly, little plastic figurines of both our Skyline heroes are included with the cars. At over ¥4,000 each (over US$50) each these toys ain’t cheap, but it’s another example of Only-in-Japan levels of auto obsession.

permalink.
This post is filed under: minicars, motorsports, nissan.