Tom Hanks’ FJ40 Land Cruiser to be auctioned at Monterey 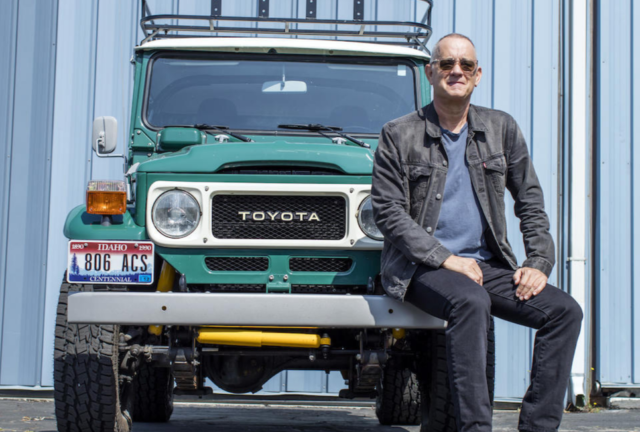 Tom Hanks might be a great actor, but we never knew he had great taste in cars too. The Saving Private Ryan star apparently owns a 1980 Toyota Land Cruiser. However, he won’t own it much longer as it is going up for auction soon, but that means a new lucky owner can.

The Rustic Green FJ40 was commissioned by Hanks as a restomod and is far from stock. The main difference is the fact that the Toyota F-series engine has been swapped with a more modern GM-sourced 4.3-liter V6 and a GM 5 speed manual. The setup even has BAR certification, for those wanting to purchase in California.

The interior been customized as well, with power high-back Porsche seats (the original seats are included with sale), Sony AM/FM cassette player with added speakers, and aftermarket air conditioning. The legendary actor’s signature also graces the dash, a reminder of this J40’s provenance.

While the modifications make the Cruiser less pure for a collector, whatever drop in value that may entail might be counterbalanced by the celebrity ownership history. This isn’t Hanks’ first dalliance with a Toyota truck, either. In Toy Story, Hanks voiced the character Woody, who hitches a ride on a hooptie Toyota pickup pizza delivery truck. Hanks’ FJ40 will be auctioned at the Bonhams Quail Lodge Auction at Monterey next month.

permalink.
This post is filed under: for sale and
tagged: fj40, land cruiser, toyota.