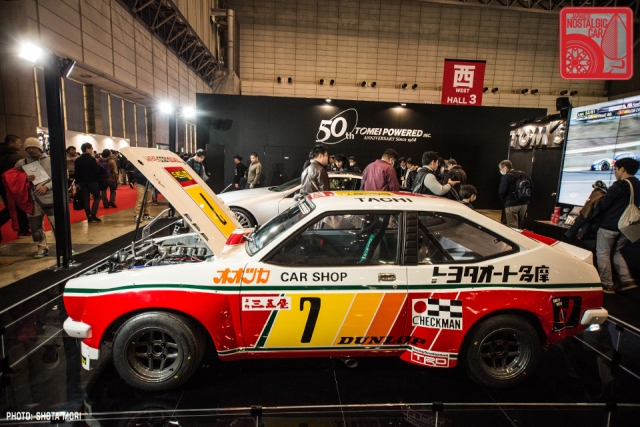 Toyotaku know the name TOM’s well. Tachi Oiwa Motorsport is the has been Japan’s premier tuner of Toyota and Lexus cars for decades, serving as something of an unofficial performance arm for the Big T. For the Tokyo Auto Salon this year, they brought out a beautiful display showcasing a newly restored KP47 Starlet, the car that launched the tuning house in the wake of the 1973 Oil Crisis. 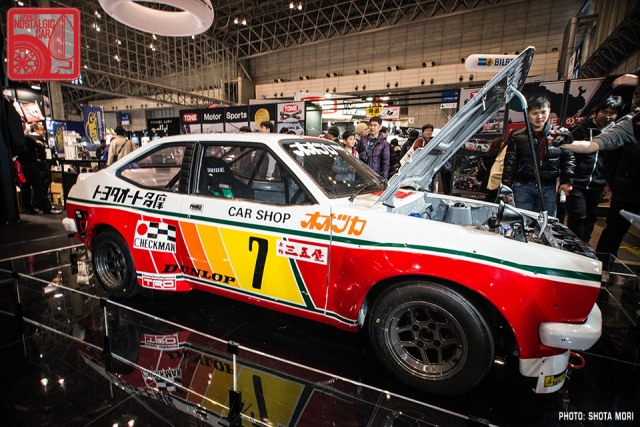 TOM’s was started by Nobuhide Tachi and Kiyoshi Oiwa, racers who opened their shop in 1974 after Toyota was forced to shelf its official motorsports programs in response to the 1973 oil embargo. It’s not an official part of the ToMoCo empire, even though it has Toyota’s blessing and TOM’s parts are sold at some Toyota dealerships in Japan. 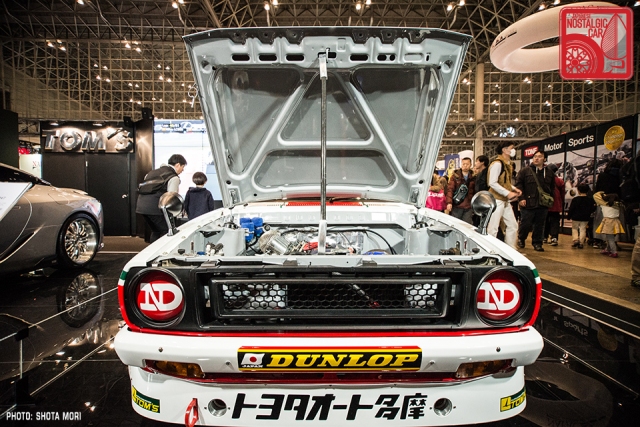 The KP47 Starlets were one of TOM’s first projects, and with driver Keiichi Suzuki behind the wheel it won its touring car series championship in 1975, 1976 and 1978. Its success built a strong reputation for the company and according to TOM’s this car was the “genesis” of the tuning house. 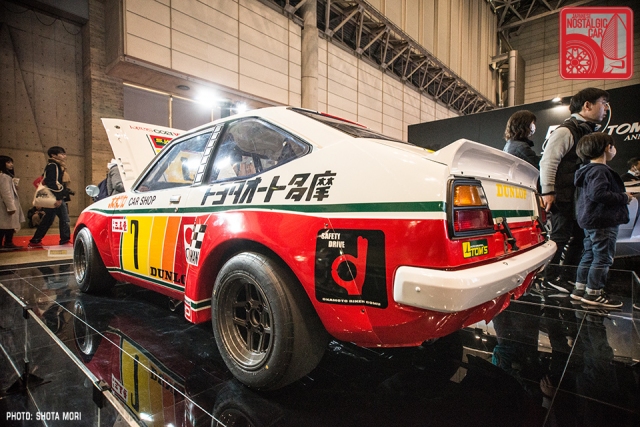 It’s important to note that this is not the actual car raced in the 1970s, but a replica. All the custom body work, such as its prodigious fender flares and wing, was remanufactured using modern 3D measuring technology. Underneath, it’s running TOM’s Advox suspension and Endless brakes behind classic TOM’s Igeta wheels wrapped in Dunlop Japan racing slicks. 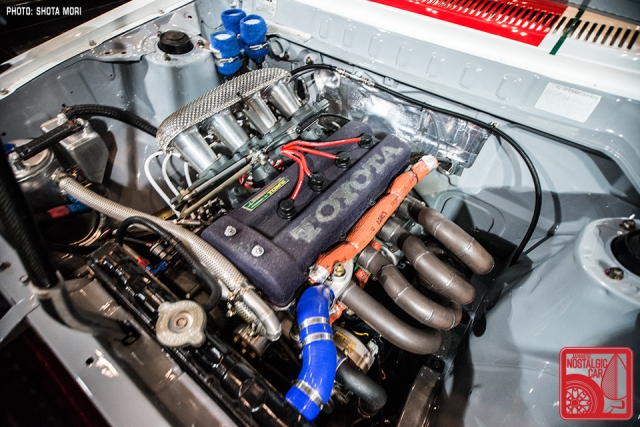 While the car is a replica, the engine itself was an actual 3K-R race motor mounted in one of the Starlets back in the day. That explains the worn-looking valve cover affixed with a “Powered by TOM’s” plaque. 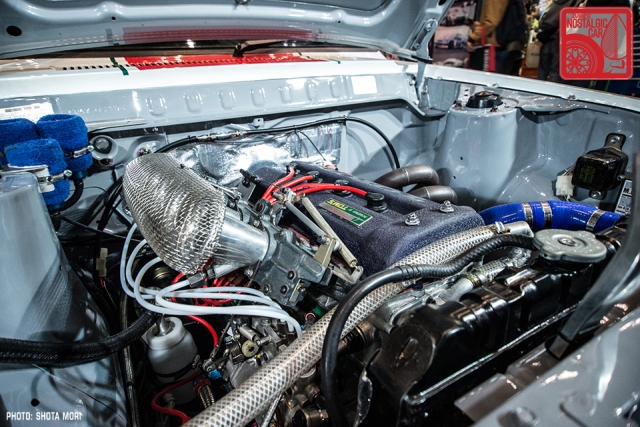 With a DOHC head, 320-degree cams, individual throttle bodies, mechanical fuel injection all tuned by TOM’s, the 1.3-liter four is said to produce a jaw-dropping 295 horsepower at 11,000 rpm.

Torque, however, is a modest 101 lb-ft — clearly it was meant for high speed running. Today, the engine functions are monitored by newer Defi gauges. The stripped out race cockpit has little else, aside from a Bride VIOS III racing seat and a Takata harness. 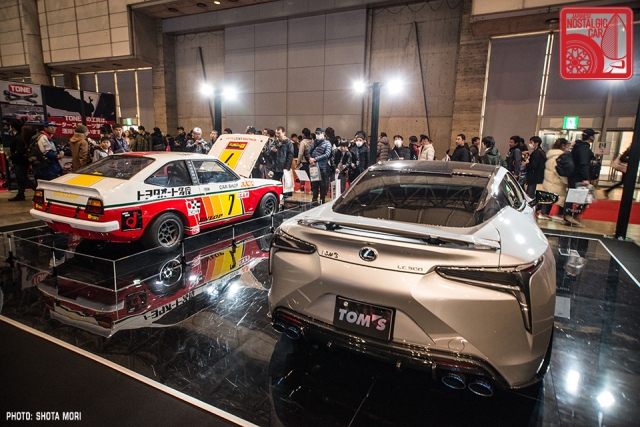 Sharing the booth with the KP47 was a beautiful silver Lexus LC500. The latest new car to receive the TOM’s treatment, it’s equipped with an original suspension, wheels and body kit developed by the company. 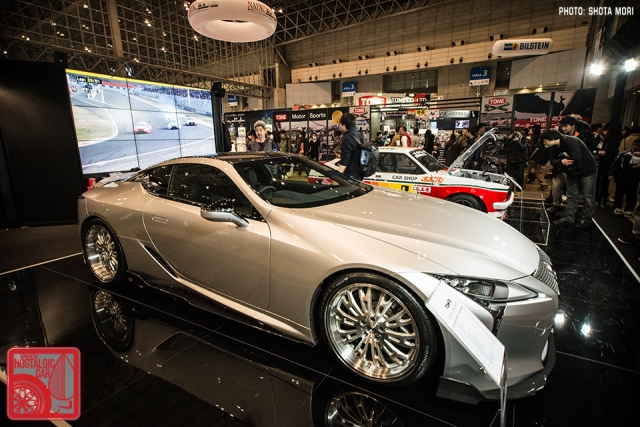 TOM’s says that the chassis and aerodynamic tuning was a direct result of the company’s campaigning of the Keeper Lexus LC that runs SuperGT. One of that car’s drivers, Ryo Hirakawa, is said to have served as a development driver. 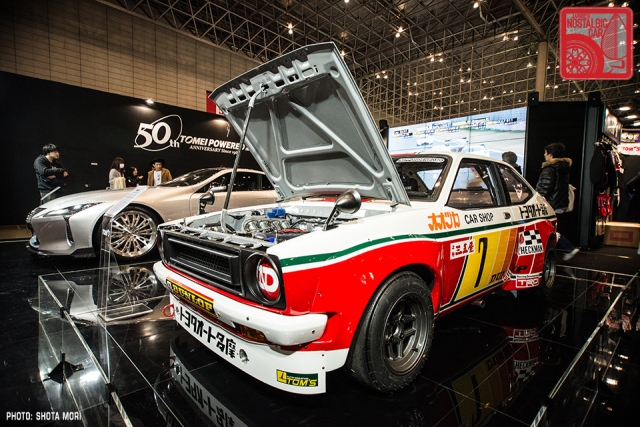 The elegant and simple display had a clear message, bookending TOM’s heritage with its oldest and newest creations. When restoration of the Starlet was completed last year, it was presented to Tachi, who still serves as president of the company where it once raced at Fuji Speedway. Reportedly he was awash with a wave of memories, eliciting applause from those who had gathered.

4 Responses to Tokyo Auto Salon: The championship-winning TOM’s KP47 Starlet was rebuilt around its original engine