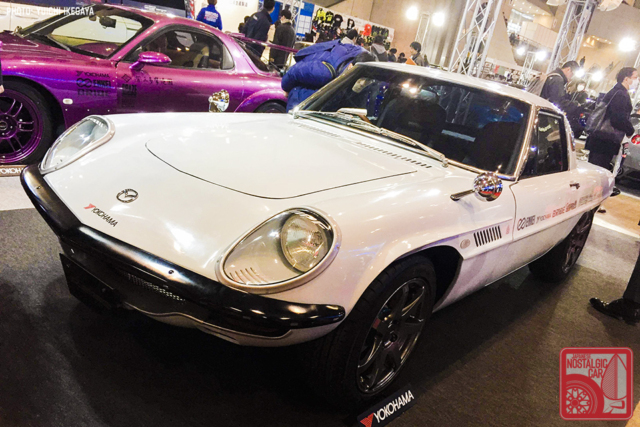 For Mazda fans the name RE Amemiya need no introduction. Isami Amemiya founded his rotary tuning house in 1974, and has been responsible for the world’s most insane modified Mazdas since. Ama-san has been sending these mad creations, usually FC or FD RX-7s, to the Auto Salon since the days when it was still called the Tokyo Exciting Car Show, but this year he turned heads with a classic build. 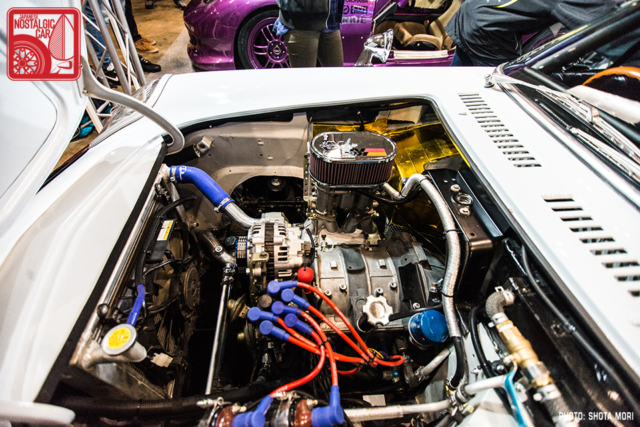 The Mazda Cosmo Sport is a true classic, so a wild Wangan brute would not be an appropriate look. As such, Ama-san eschewed the typical high-powered turbo setup for something atypical for him, a naturally aspirated 13B side-port. To keep to its old school roots, the fuel system was converted to carburetion, and power is delivered via an SA22 transmission. 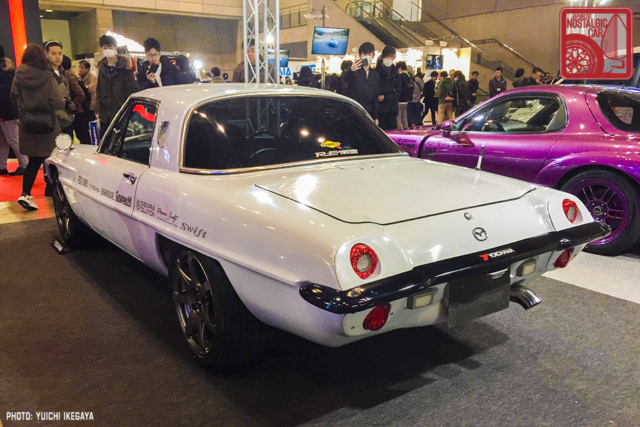 Out back, Ama-san has fitted the Cosmo Sport with his signature round taillamps, but in panels so the originals could be retrofitted if desired. The exhaust is completely custom, ending with a down-turned “dolphin tail” exhaust tip that is another Amemiya signature. 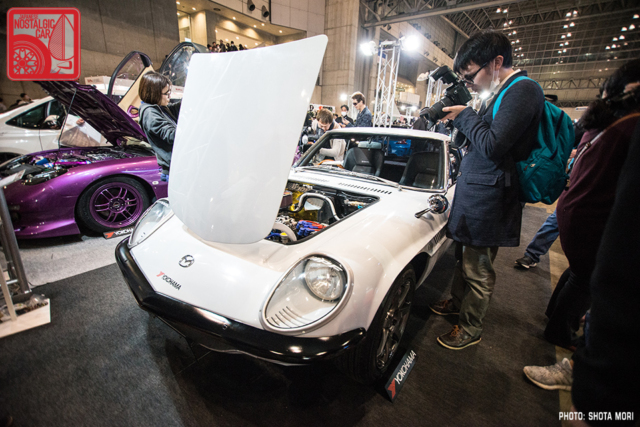 The interior has been modernized, but the original dash and seats had reportedly aged beyond salvageable. As for the wheels, 16-inch Enkei PF 07 wheels are completely contemporary, but they had to be able to fit over Brembo monoblock calipers up front and custom brakes by Cosmo specialist Star Field at the rear.

The car has been sitting in the back of Ama-san’s shop for more than a decade waiting its turn. Though it’s a long-wheelbase model, that’s what makes it fitting for a resto-mod. It provides a classic look with daily drivable power and parts underneath, and as Ama-san’s personal car it was good to finally see it get its day in the limelight. 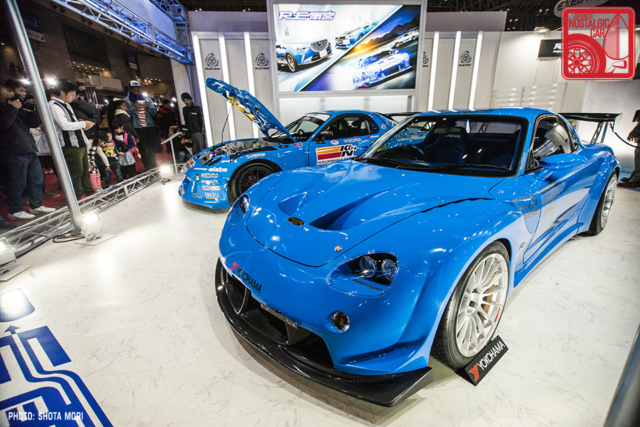 Of course, RE Amemiya wasn’t going to let a TAS go by without bringing at least one new Wangan warrior. The real star of the show and the flagship of RE Amemiya’s lineup is the X-Response 7. 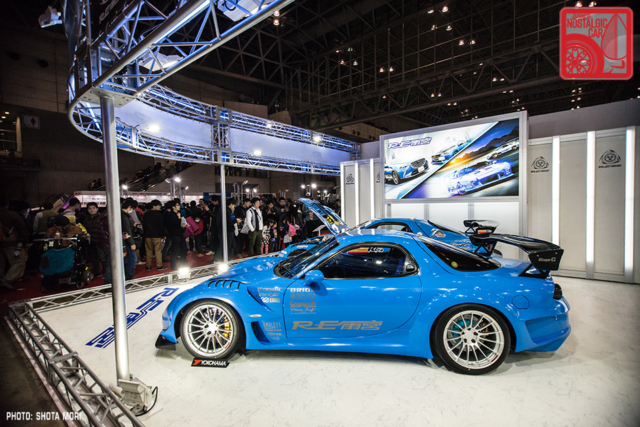 Based on an FD3S RX-7, it features a wide body kit said to be inspired by SuperGT racers. The fenders widen the body 50mm (nearly two inches) on each side and is an evolution of the Super Grade 3 kits Amemiya once produced. 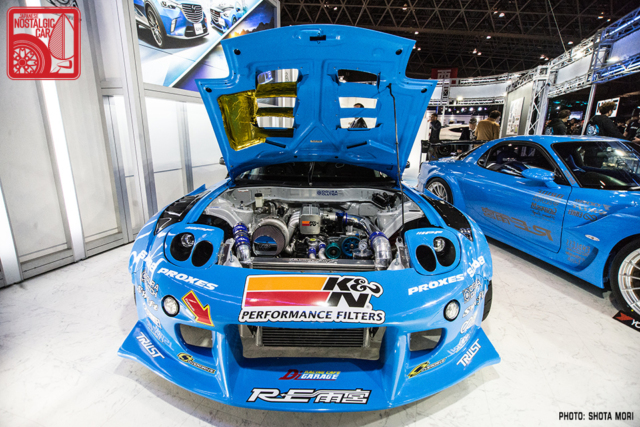 Next to it was another FD3S RX-7, a quad-rotor beast that competes in the D1GP drifting series. This is the car that will participate in the 2018 season. 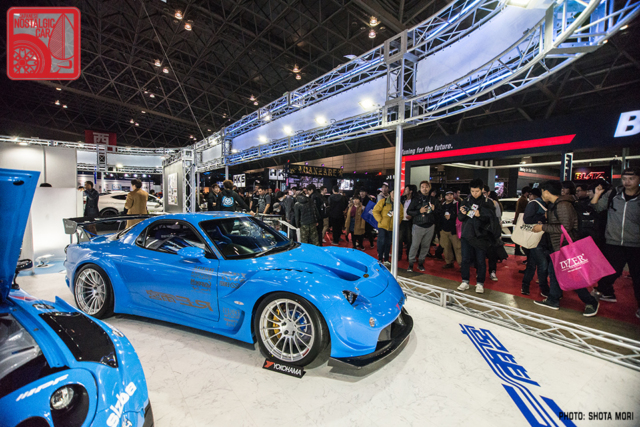 Back to the X-Response 7, under the hood is a side-port 13B that puts out an estimated 500 horsepower. Ama-san also optimized the RX-7s weight distribution by moving the mounting position of the motor 20mm back, and it sits 20mm lower in the chassis as well for a preferable center of gravity. The suspension is reportedly fully adjustable multi-link, capped off with Enkei RS05RR 18-inchers wrapped in Yokohama Advan A052 tires. 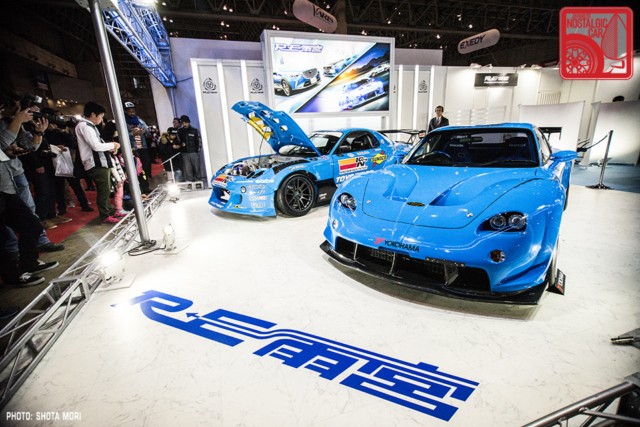 Ama-san is nearly 72 years old now, but he shows no signs of slowing down. If he has anything to say about it, he’ll be gracing rotaries in Amemiya Blue for many more to come.