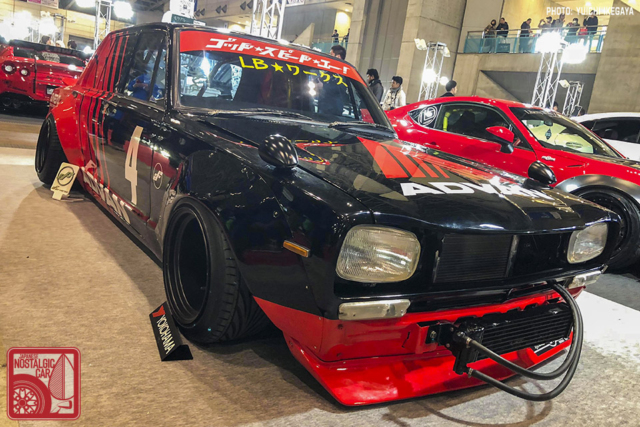 The classics of the chrome era at this year’s Tokyo Auto Salon could be split into two camps. Restomods look towards the future, using a nod to the past to incorporate new and modern ideas. Then there are the cars that stand firmly in tradition, incorporating old school Japanese style to make a statement.

Liberty Walk’s Advan Hakosuka was already shown last year, and instantly became one of our favorites. The wide-fendered, slammed, and deep-barreled look is the Japanese equivalent of a lowrider for many reasons, not least of which is because was once favored by gangsters.

This year, the Watanabes have been replaced with widened steelies, but still showing off Wataru Kato’s LB-88 Toyos, done in the style of rain racing tires of old. Literally covered in old school gangster symbolism (that’s a manji, not a swastika), it remains a show stopper every time.

Kei Miura of Rocket Bunny fame debuted his Datsun 521, wearing a new Pandem body kit for Nissan’s compact pickups. Note that this example, however, is left-hand-drive, meaning that it was purchased in America and repatriated — patina, rusty gash and all. The engine bay is beautifully simple, with an L-series and multi-tone horn that likely plays the theme from The Godfather.

At the booth of a soda blaster company called EZ Blust, the star car was a Hakosuka Skyline. Split down the middle with unpainted and painted sides, it showed the blaster’s capabilities at removing paint while leaving the metal unscored.

The painted side was an homage to the Works Hakosuka Touring car of Kunimitsu Takahashi, but curiously it had a BRE logo (for US-based, Datsun-backed Brock Racing Enterprises) rather than the Prince Motor Company abbreviation. 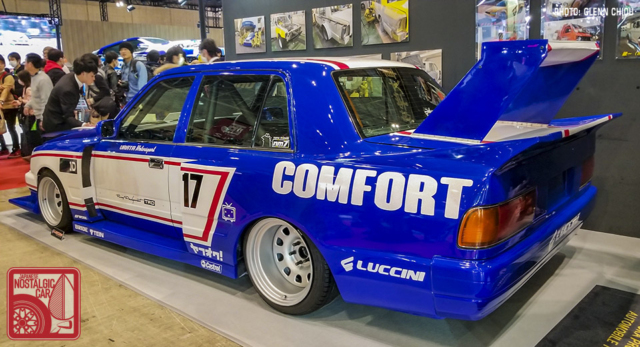 The visual language of these cars is so ingrained in the Japanese psyche that it even invites parody. Vocational students at the Shizuoka Technical College imagined if Super Silhouette racing continued to the modern age and Toyota campaigned its most ubiquitous sedan in the series.

It uses as its base a Toyota Comfort sedan, then it adds the box flares, crisp livery and outsized wings of Group 5 race cars, which themselves inspired the look of these customs. It’s all a bit of a gas, as the Comfort is perhaps the most ubiquitous sedan across Japan, used primarily as a taxi.

The inspiration continues on a HiAce van chopped into a bike-hauling pickup. If the wild flares and deep Racing Harts didn’t give away its bosozoku loyalties, the pair of Kaws in the bed surely do.

Before we go, we see one last  return to Advan livery, this time on a Daihatsu HiJet pickup. The Hello Special body kit and wheels turn the work truck into an aggressive little bosozoku bandit. This time, the car was accompanied by costumed members of its speed tribe. Satirical or not, you probably won’t want to run into these guys on the road. 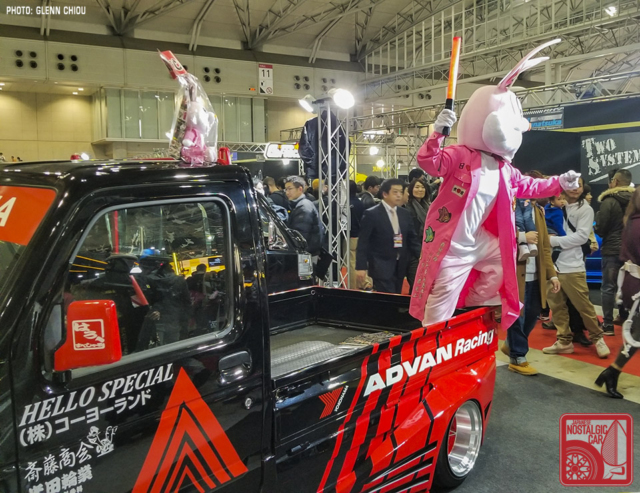 We realize these cars may not be built to the tastes of western aficionados, but that’s not the point. It’s a style unique to Japan. And as long as there are people left who can appreciate the raw aggression of a slammed Hako or crack a smile at a guy in a rabbit suit waving a baton, Japanese car culture will live on.