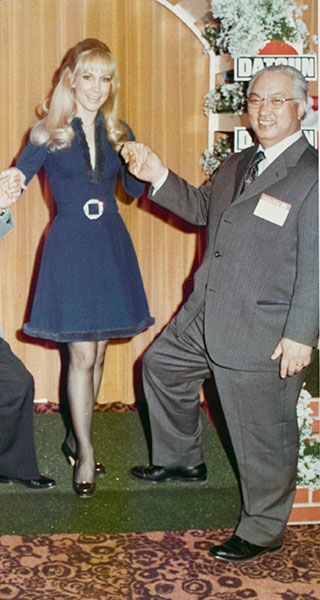 Yutaka “Mr K” Katayama was a celebrity in his own right, but mostly in the automotive world of die-hard Nissan nut jobs. Barbara Eden, on the other hand (for those under the age of 25), was the Zooey Deschanel of her day, the ur-manic pixie dream girl whose character in I Dream of Jeannie was literally magical.

One of the things that helped Mr K, the outspoken president of Nissan USA during its formative years, put Datsun on the path to success was his embrace of everything American. To understand how to sell Japanese cars in America, he cast his observations of Japanese tradition to the wind and threw himself wholeheartedly into American culture. And if that meant taking Barbara Eden’s hand at a Datsun promo event, well then so be it.

This never-before published photo was shared with us by an ex-Nissan PR rep, who found the Polaroid in a desk drawer before Ghosn moved the automaker’s US headquarters to Tennessee. Had he not scanned it, it would have almost certainly been lost to history.

permalink.
This post is filed under: The Vault and
tagged: datsun, mr k, nissan.