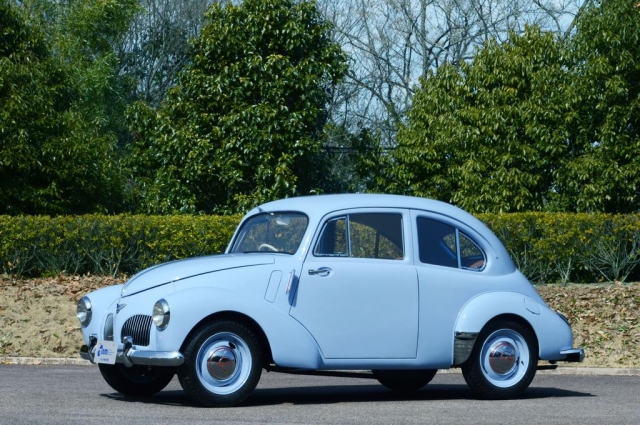 Introduced in 1947, the Toyopet SA was Toyota’s first all-new post-war passenger car design. It was advanced for a Japanese car of its time, but due to limitations on automobile production and Japan’s market conditions at the time, only 215 were built. The Toyota Automobile Museum has probably the nicest remaining example in existence, and it actually runs.

At the time the entire auto industry in Japan was under a passenger car ban instituted by American occupation forces. Only commercial vehicles — trucks, buses, taxis — were allowed, However, Kiichiro Toyoda recognized that one day the ban would be lifted, and began to develop a prototype that Toyota could produce when the occasion arrived. 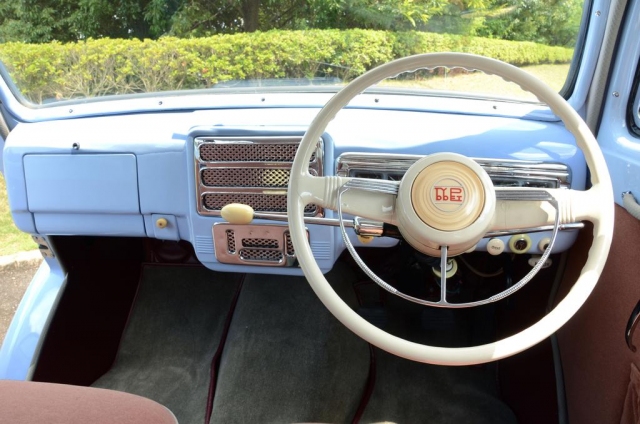 The SA is often compared to the VW Beetle and similar eastern European designs of the era. It utilized a backbone rather than a ladder frame, a layout that would later underpin the 2000GT. The frame split into a Y at the firewall, with a front-mounted, water-cooled, 1.0-liter inline-four sitting between its arms. It generated only 27 horsepower, pushing the somewhat heavy 2,580-pound car to a top speed of 54 mph via a three-on-the-tree manual.

The SA was the first Japanese car to ride on a four-wheel independent suspension. It also employed hydraulic brakes at a time when most of its rivals had mechanical systems. The exterior featured an integrated grille design when other domestic vehicles used upright radiator grilles. It even offered a dash-mounted radio, one of the earliest Japanese cars — if not the first — to do so.

On the other hand, other details seem amusingly antiquated, as shown in a video released by the Toyota Automobile Museum. Turns are indicated by semaphore signals. There’s a single overhead wiper managing rain clearance. The taillights are ridiculously unembellished. And the license plate light is activated by an external switch on the back of the car. Oh, and then there’s the Toyopet logo on the steering wheel that that looks like it says “TY P bb EI” instead.

While the Toyopet SA was an ambitious project, it was a flop for Toyota. Few Japanese could afford cars at the time, and most cars were sold to taxi fleets. The SA had only two doors, which eliminated that market entirely. In addition, its independent suspension simply couldn’t handle Japan’s rough roads as well as solid axles.

It wasn’t all for naught, though. The lessons learned from building the SA would influence the development of the first Crown. That car did succeed, and was pivotal in making Toyota what it is today. As such, it very much deserves a place in Toyota’s museum, and it’s good to see this rare machine preserved.