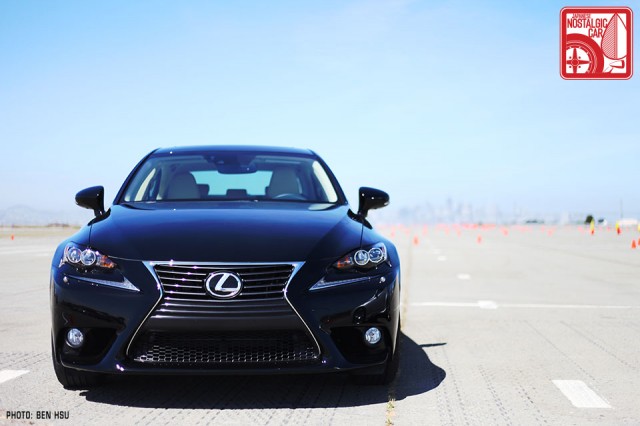 By the time Nobuaki Katayama began work on the original Lexus IS, he was already a rock star within Toyota. He’d chief engineered all-time greats like the Lexus SC and JZA80 Supra and, in his younger days, worked on the legendary AE86. He’d put in five years in the trenches of Toyota’s European motorsports program and in his spare time, according to company lore, was often seen behind the wheel, tail out, on rally stages.

As the so-called enthusiast’s Lexus, the IS 300 had a lot of weight to shoulder. The world was waiting for the still-young brand to prove it wasn’t just a wannabe. You see, Lexus wasn’t just the flagship marque for Toyota. It was, and still is, the flagship marque for all of Japan. With the third-gen IS dropping worldwide, it’s time to look back on Katayama’s legacy, and see whether the latest incarnation is a worthy successor. 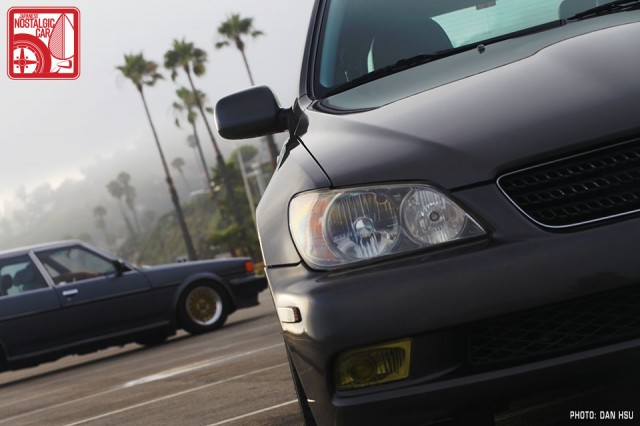 In all other Lexus models, the letter “S” stands for “sedan” — Executive, Grand, and Luxury. The IS 300 was supposed to change that into “sport.” Lexus was a reliable, unobtrusive butler capable of balancing a pyramid of wine glasses with grace. What it wanted to be was a rambunctious street fighter capable of dethroning the ultimate driving machine. Enter the “Intelligent Sport.”

We at JNC have always liked the IS 300. We remember fondly how it came out with guns blazing to challenge the status quo. We dug its sprightly handling, engaging driving experience and purposeful looks. In fact, we like it so much that photographer Dan Hsu bought a used one recently. Other pundits rated its handling as better than its German rivals too, but it still failed to live up to its promise for two maddening reasons. 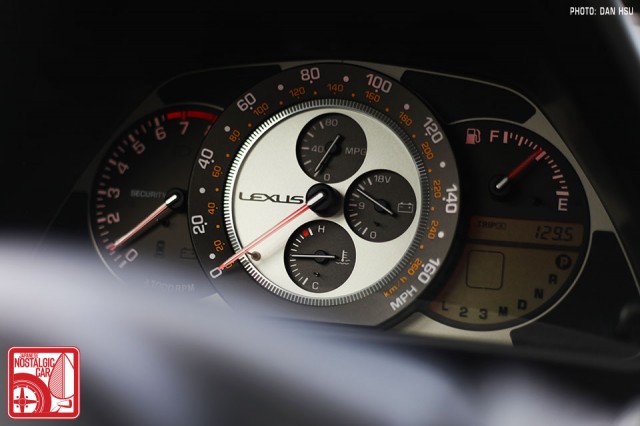 The first was Toyota’s own damn fault, and as plain as the PRNDL on the IS’s chronograph gauges. Though it was eventually offered, the lack of a stick at its initial public offering was an epic misstep. Establishment players were looking — itching —  for a reason to make the new kid sit at a different table, and Lexus served it right up to them on a silver platter.

The second reason was beyond Lexus’s control but no less fatal. At the time of the IS’s launch in 2001, the brand was a mere 11 years old, an embryo in terms of old world luxury. The customers it was courting wanted their insignias dripping with upper crust prestige, and the oval L— a logo basically made up because Americans wouldn’t shell out $40,000 for a Toyota— lacked that provenance. 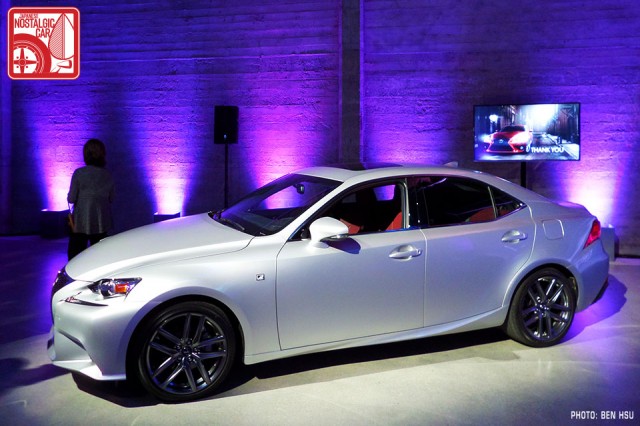 With the IS 300 losing out in the death-octagon of the free market, Lexus retreated to the comfort of what they know best. Its second-gen replacement grew roomier, quieter and more luxurious. For the cynical enthusiast, that’s code for bloated, less engaging, and heavier. It was, however, by most measures a better car, a focus group’s wet dream, and Lexus sold oodles of them during an economy booming on triple-financed houses.

Lexus recently invited JNC to San Francisco for an opportunity to assess the 2014 IS, the culmination of a years-long effort to unify the entire Lexus lineup under a common theme. Additionally, with Lexus just one year from its 25-year threshold into classic-dom, it’s important to gauge where Japan’s flagship marque is headed. 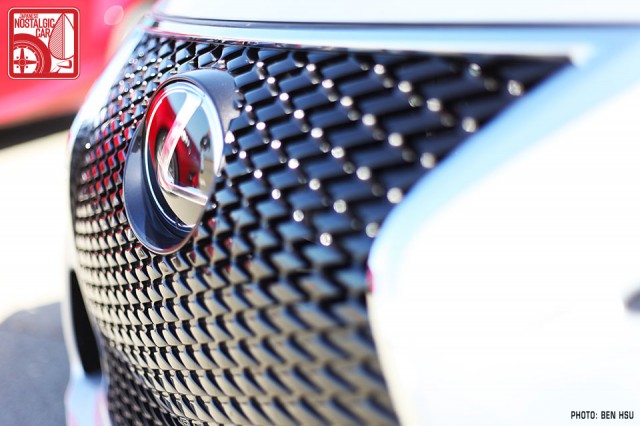 The key visual feature uniting all Lexus cars is now the “spindle” grille. Say what you will about the corporate face, but it’s a necessary part of brand identity. The unwashed masses barely know a Camry from a canoe, so the grille serves as a quick way to distinguish your deluxe chariot and tie the brand together.

It’s also a way to set different trim levels apart. The gorgeously formed diamond waterfall is exclusive to performance-grade F-Sports, whereas regular ISes get good ol’ horizontal bars (see lead photo). As its name implies, the grille is meant to evoke the spindles on Sakichi Toyoda‘s automatic loom, the invention that spawned the Toyota manufacturing empire. 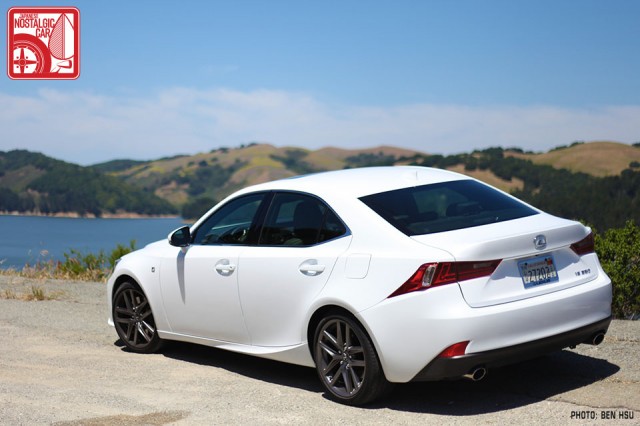 The only problem with corporate identities is that you have to keep them around for them to mean anything. Remember when Lexus made a huge hullabaloo over the arrow-shaped chrome on the 2007 LS 460’s C-pillars? There was even a whole commercial specifically about that one design trait.

But where is it now? It didn’t appear on any other Lexus and was never mentioned again. Toyota managed to duplicate the Nozaki Arc for the Scion FR-S, and you can see it in the new IS’s C-pillar too. We hope they stick with it. On the other hand, its katana-slice taillights and 1970s Nissan Skyline-esque “surf line” are certainly striking, but will take some getting used to for traditionalists like us. 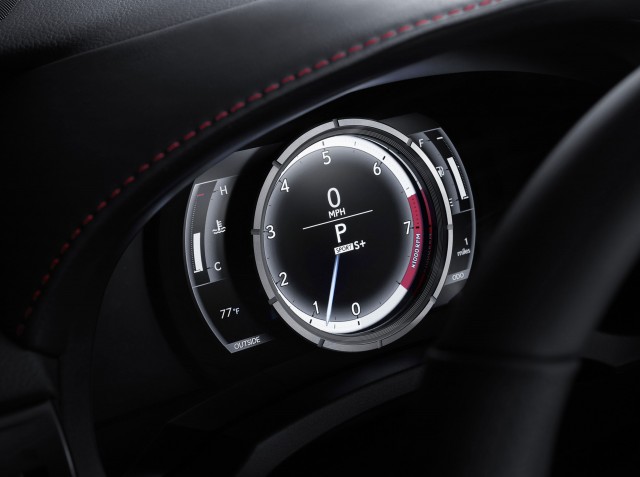 Before you call us curmudgeons though, let us say that the F-Sport’s 3D gauges are absolutely brilliant. It simultaneously invokes the original IS 300’s chronograph and the trademark centerpiece on Lexus’s half-million-dollar LFA supercar. The steel-bezel even slides over to display auxiliary info like fuel economy, just like the LFA’s. Unlike the seemingly arbitrary Nike swoosh daytime running lights, it’s an ingenious way to tie the marque together. 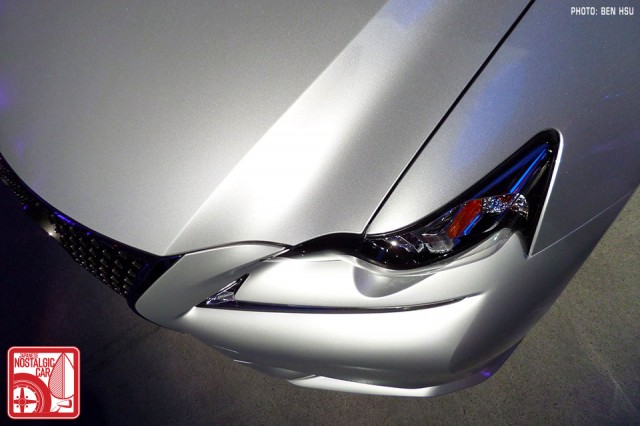 In addition to artful grilles and trick tachometers, the F-Sport package comes with a more aggressive fascia, fatter seat bolsters and a stiffer suspension. Why it’s even offered on the IS 250 is anyone’s guess. Enthusiasts will definitely want the extra 102 horses that come with the 306hp 3.5-liter V6 on the IS 350 (unlike ze Germans, model numbers still correspond to engine size).

There’s not much else that can be said about the 250 except that it no longer comes with a manual transmission. Neither does the 350 for that matter, but at least the latter is equipped (on non-AWD versions) with the superb 8-speed automatic from the outgoing IS-F. So is the lack of a manual once again a big fat fail? Actually, no. 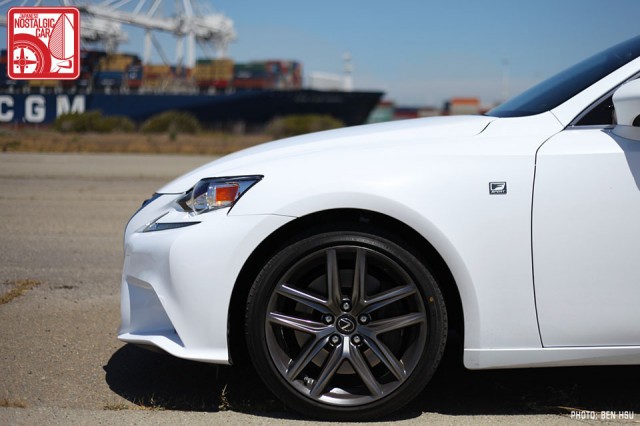 Back when the original IS debuted, a modern car wasn’t that different from its nostalgic counterparts. Maybe an IS 300 would get you fuel injection, ABS and a CD player, but that was about it. Now cars have more electronic gizmos than all of NASA in 1985, and the automatic transmission is quicker shifting, better on fuel, and smarter than you. 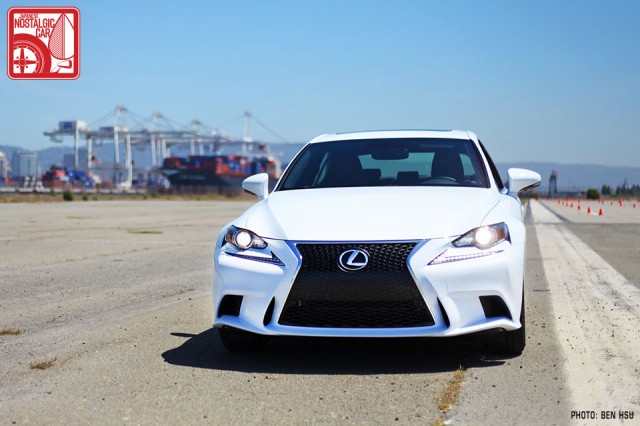 Launch the IS in Sport Mode and the trans clicks through to hyperspeed like a hummingbird’s wings. It’s nothing like the slushboxes of old where a shift sent shudders through the entire body. In fact, if Lexus didn’t pipe induction sound into the cabin a la Scion FR-S, you’d hardly know it was shifting. Throw the car into a turn and it’ll even hold the gear longer upon detecting sideways g forces. While you’re in that turn, you might even notice that its steering, unlike the outgoing IS, is not connected to the wheels by a dead fish.

Performance has improved over the second-gen IS by a country mile, even if it’s not quite as frolicky as the original IS 300. We loved the way Katayama’s baby bit into turns when you goosed the throttle, as if vestiges of the AE86 were echoing through. The new car is undeniably faster around an autocross course, but its weight and lack of a limited-slip diff hurt it in the corners. 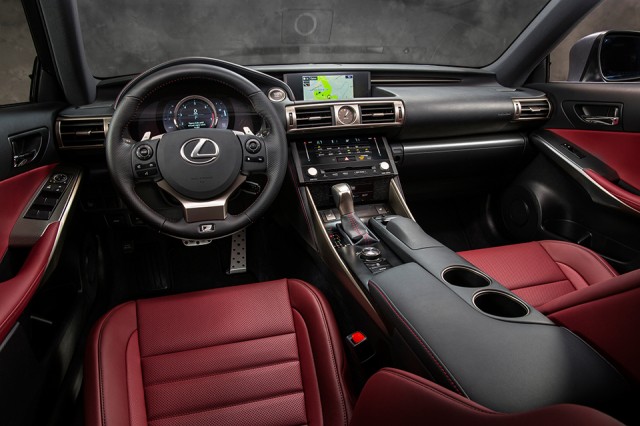 The new IS can be fun car to drive, but only when it lets you do that, Dave. Here are just some of the things its Skynet ECU can do. It can slow down, follow by a pre-set car length and re-accelerate once the car in front has moved. It can measure the speed of the cross traffic behind it when you’re backing up. It can even predict what the traffic will be like 15, 30 and 45 minutes into the future.

We are one step away from the self-driving car, and the company that’s taking us there recently built a real-life Astro Boy and is sending it into space. With all this tech and power wrapped in an classically red leather cabin, one could hardly ask for any more, right? 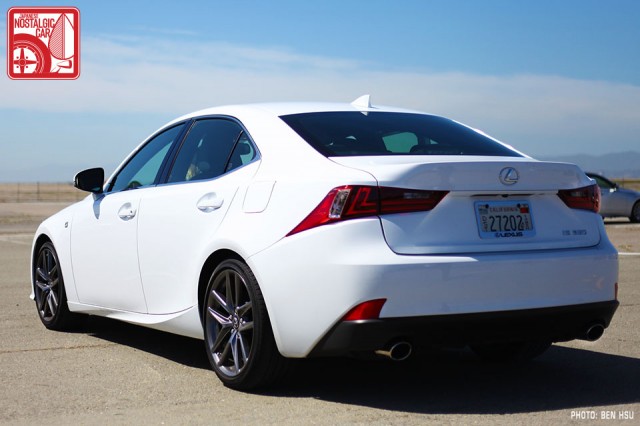 There is only one criterium a new car needs to receive the JNC Seal of Approval: will it be coveted classic in 25 years? When the Katayama IS debuted, the answer was a no-brainer “yes.” Maybe it was the halo of the 2JZ, its trend-setting taillights or its timing at the peak of tuner fever. Maybe it was all those things plus its tight, RWD layout in a package the size of a 1998 Corolla.

This new IS? Well, it’s not a definite “no” but it’s not an unambiguous “yes” either. Lexus is in a very different place now. Toyotas are actually being considered classics so heritage is no longer a question, and Lexus has built a supercar to rival the world’s best. With nothing left to prove, Lexus doesn’t need to clobber us over the head with a does-everything brain the size of Deep Blue’s. We miss the upstart, can-do attitude of Katayama’s IS. 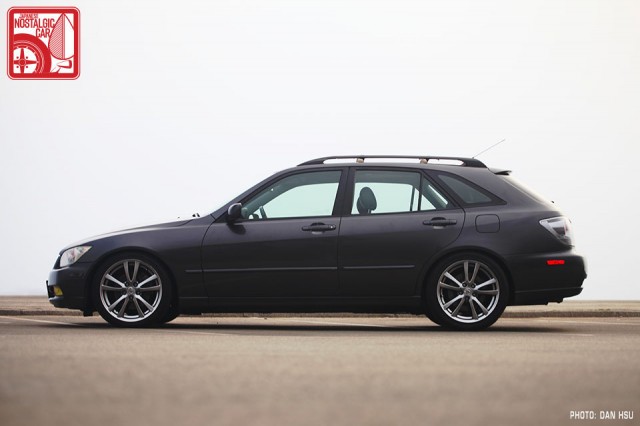 As for Dan, did we mention that he bought a SportCross? We’d like to claim it was because he needs the space for hauling around photography gear, but the truth is it’s just so damn cool. Naturally, it had to be Graphite Gray Pearl. Not only is it one of the best looking IS colors, but back in 2001 dark gray was rarely seen in the automotive universe. Now it’s practically mandatory on luxury cars and the IS set that trend.

Our search for a GGP SportCross nearly took us as far away as Atlanta and New York, but in the end craigslist came through with a SoCal local. Best of all, it was owned by a fellow JNC member (who goes by the usernameMaestro). Judging by the meticulous walkthrough he gave us and his gorgeous 240Z (which was already sporting a JNC decal!), we knew we were buying from a car guy who spoke our language. 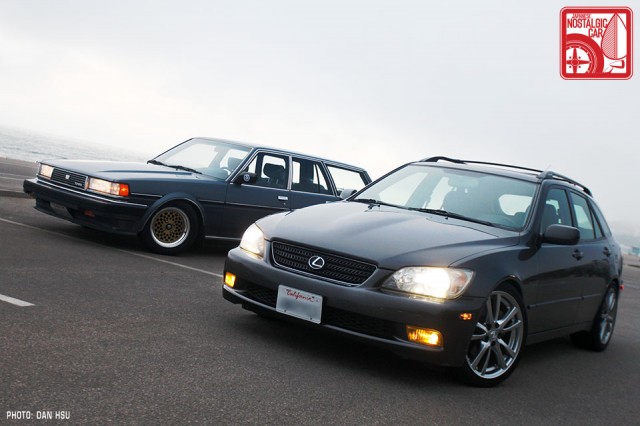 The SportCross makes the perfect companion to the existing JNC wagon, my 1986 Cressida. If we were in Japan, we’d instantly gain the nickname “Toyota Straight Six Brothers from Mt. Angeles!!” or something.

There are rumors the new IS will spawn coupe and wagon variants. If that proves true, it’ll edge closer to the definite yes category. For now, though, we’re glad to have the IS most imbued with Nobuaki Katayama’s spirit.