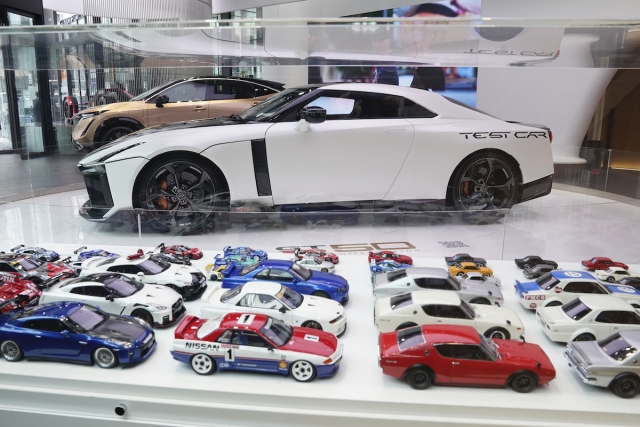 We will admit that the first thing to catch our eyes in these photos of the GT-R50 Test Car that’s now on display at Nissan’s Ginza showroom is the cases full of scale GT-R models. But, after looking at those our eyes were drawn to the GT-R50’s Empire-chic  black and white paint job. There’s something alluring about the myth of the Test Car. 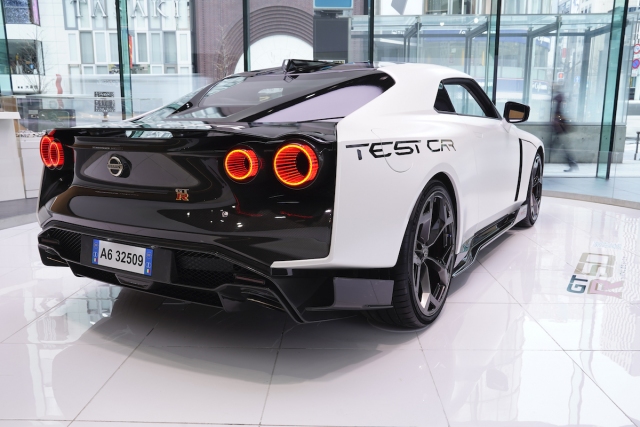 With those floating afterburner taillights and a black so glossy that still looks wet, the car looks like something Kylo Ren would use to hunt down rebel landspeeders. Apparently, though, this Test Car was the one used to shake down Italdesign’s construction of the $1.1 million supercar before deliveries to the 50 customers who could afford one. It was shown driving on the track in Italy around Christmas, then loaded onto a plane headed to Tokyo. 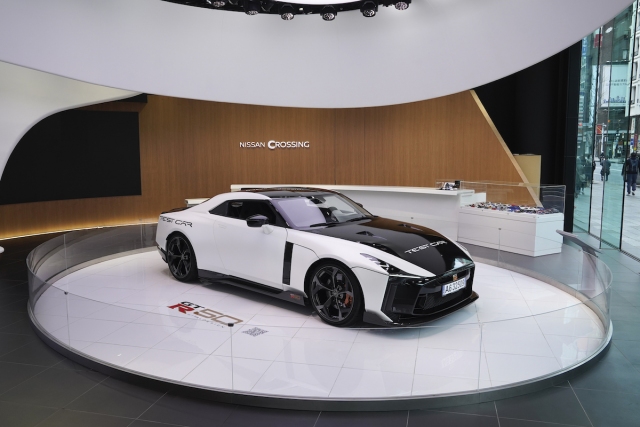 We’ve seen the GT-R50 in its original gray and gold, Bayside Blue, and even two in  Tokyo Motor Show Kenmeri homage. The Test Car, with its high-contrast colors, it almost looks like a completely different car. we wouldn’t say it’s beautiful, but it does have a high tech coupe-ish feel. 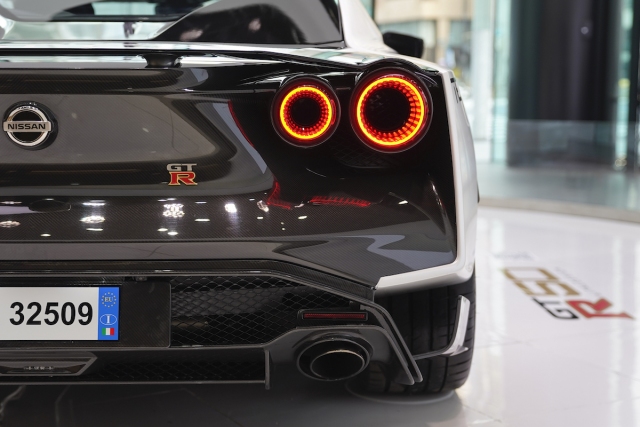 Test cars are traditionally used to evaluate race cars, and in Japan they are usually black. Famously, in Gran Turismo 4 there were four hidden test cars that would only appear once every 400 in-game days. If memory serves, they were a Nissan R390 GT1, Mazda 787B, Toyota GT-One, and I’m blanking on the last one (I’m sure one of our readers will fill me in). All were black and ridiculously expensive (Hot Wheels recently released a diecast version of the Mazda).

Sometimes it feels as if the Test Car might be more of a promotional gimmick. Automakers often stage photos with them to excite fans and potential customers. But, if you’re a kid that happens to be walking by the Ginza showroom and you see this radical black and white Stormtrooper-mobile, you’ll remember it for life. 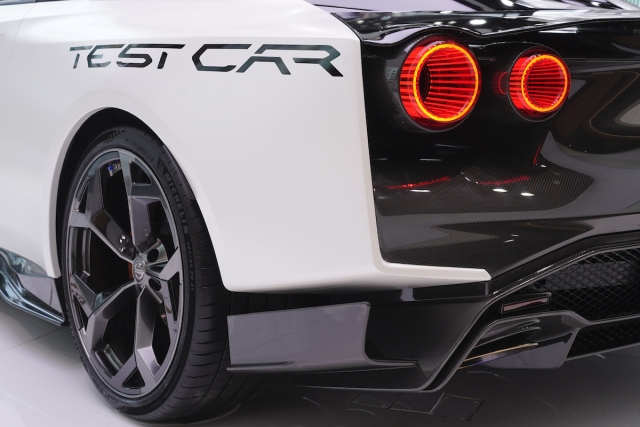 The GT-R50 was designed by Nissan and is coach-built by Italdesign to mark 50 years of the GT-R and the design house founded by Giorgetto Giugiaro. The run is limited to 50 units, each with a 720PS (710 horsepower) twin-turbo V6 from an R35 GT3 race car. For $1.1 million, owners are able to customize them with unique colors and interiors straight from Italdesign.

On the surface it all seems a bit silly, but when we drove one in 2019 it dawned on us that it was actually a triumph of the GT-R legacy. The GT-R is a lineage like no other, and for the handful of lucky owners who get to put one in their garage, we’re jealous. The GT-R50 Test Car will be on display until March 31, 2021. 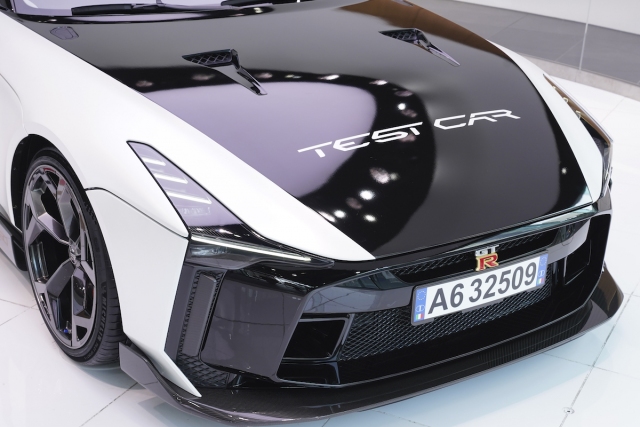 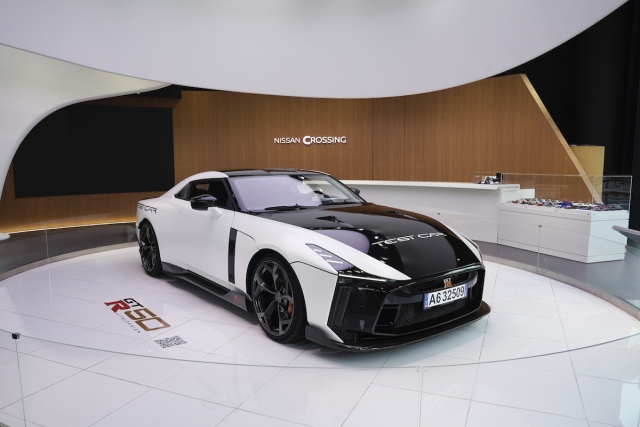 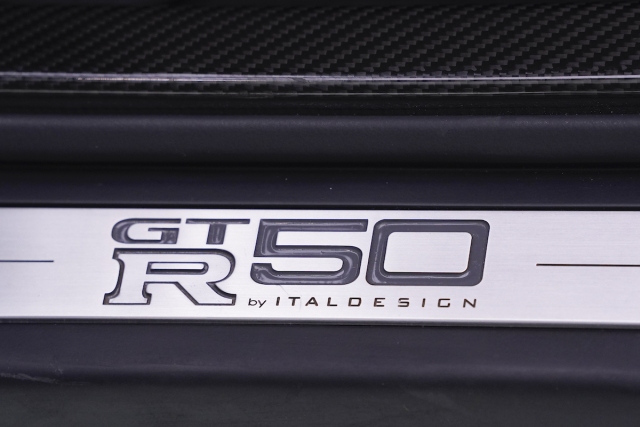 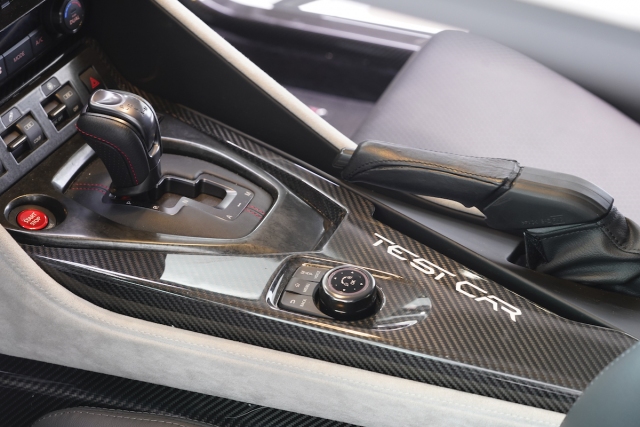 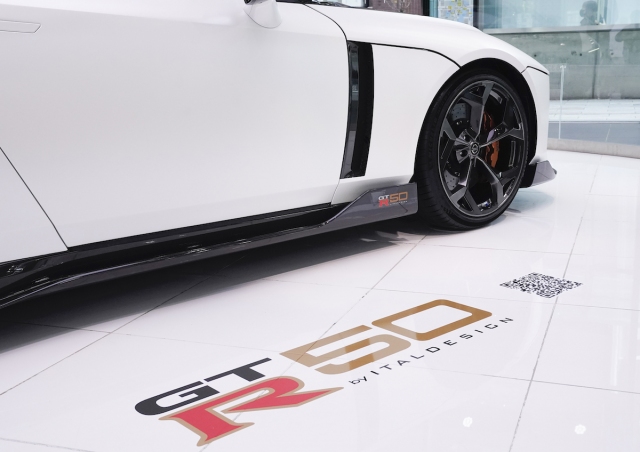