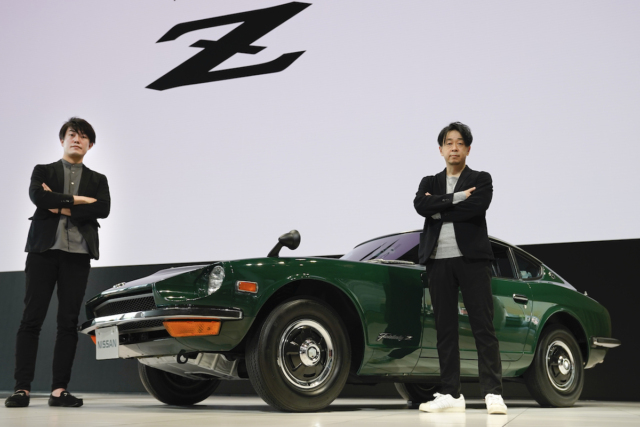 Redefining an icon with over 50 years of history behind it was always going to be a difficult task. However, in an interview published by Nissan, the two designers responsible for the new Nissan Z talk about what it was like to work on the 2023 Nissan Z. Standing before an original S30 Fairlady Z, exterior designer Naoyuki Ohkoshi and interior designer Takuya Yamashita discussed what it was like to bear the responsibility of penning Nissan’s most famous model. 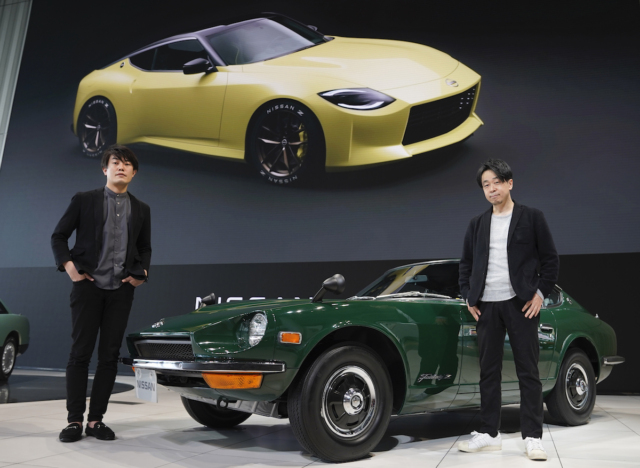 Ohkoshi (right) was hired by Nissan’s design department in 1997. According to Nissan, his notable projects have been on the Infiniti side, having worked on cars like the 2009 QX60 and the 2012 QX80.

“About 100 [Z designs] were submitted,” Ohkoshi revealed. Nissan held an internal design competition welcoming ideas from design teams located in Japan, China, the US, and the UK. 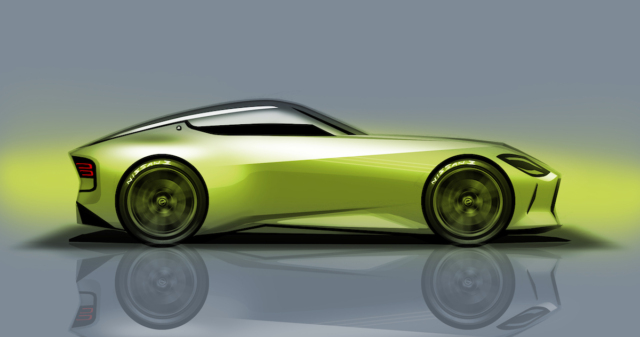 “Three finalists were chosen and made into full-size clay models. Once these were completed, our executives studied each design carefully and chose a winner, which turned out to be the entry from the Japan team.”

Meanwhile, Yamashita was tasked with designing the cabin. To him, the job was a lot more personal. “To be chosen to design the Z, a car that I admired and loved since my childhood, was an honor and it made me very happy,” he said. “I definitely felt a high level of responsibility, as the Z is considered a Nissan icon. By showing the utmost respect to the history of the car and to those who helped build the Z into what it is today, I wanted to create the best design yet.” 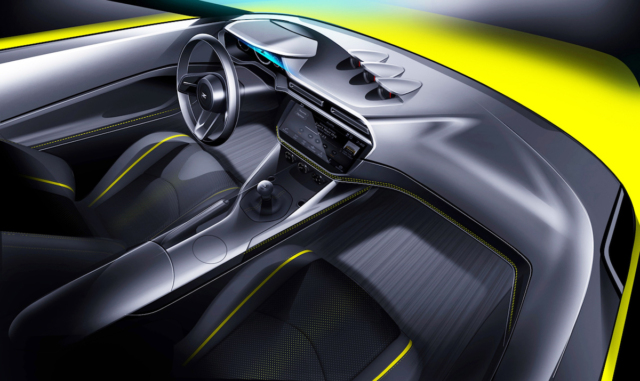 “Initially, the interior of the Z was meant to be a simple evolution of the current Z’s interior,” Yamashita explained. “However, we decided to go in a different direction after some input from our executives: They were Z fans and wanted the model to be equally great inside and out. The original interior design would have been a simpler task, but they did not want to compromise anything with this car. This made me very happy.” 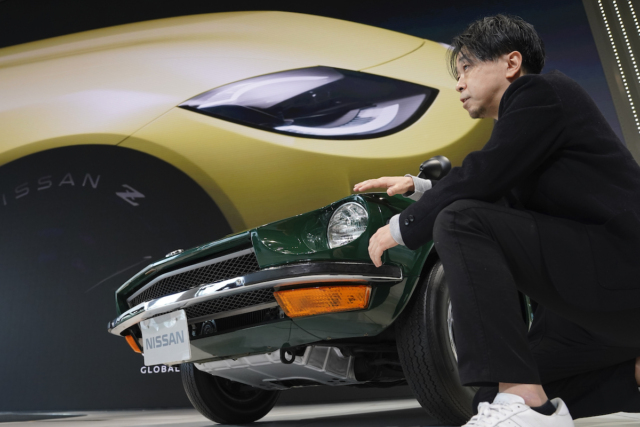 According to Ohkoshi, the downward sloping character line on the side of the car was the hardest part to get right. “If we adjusted it a bit, it meant we had to re-think other areas as well. There were so many sketches made, drawing the Z is like muscle memory for me now,” he said. 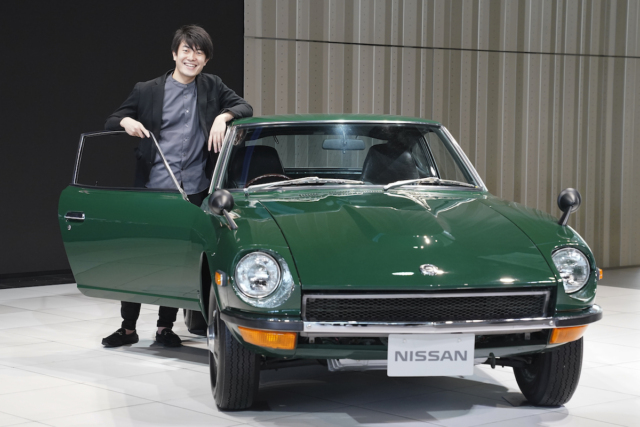 For Yamashita, it was the center console that proved the most challenging. “I would have to say that getting the center console dialed in was the most difficult part of designing the interior. In the current 370Z model, the center console bends, rising as it moves toward the driver. With the Z, we wanted to make it straight and level, acting like a strong beam or support that enhances the Z’s rear-wheel-drive sports car spirit,” he explained. “In fact, it took six months alone to get the design from 95 percent complete to 100 percent complete.” 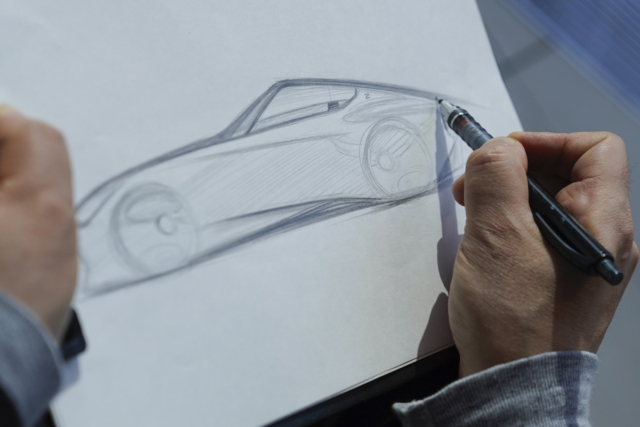 It was important for Ohkoshi to have anyone look at the car and recognize it as a Z immediately. “If you study past models, the design DNA of the original Z (S30) has been noticeably implemented in other generations of Zs as well,” he said, citing the 370Z’s side window as an example. “This is a form of paying respect, so I feel that the Z’s side-window graphics pays homage to both the original Z and the 370Z,” he continued.

Ohkoshi went on to say, “It was important to convey the original Z’s silhouette with this car — with classic lines flowing from the roofline and dropping over the rear glass hatch — to give people a feeling that it’s a Z without even seeing the emblem.” 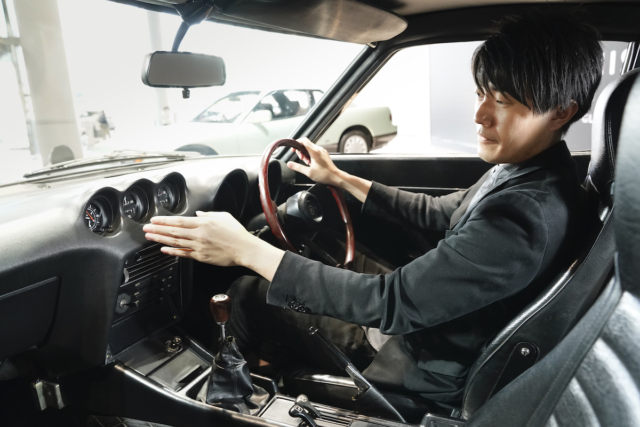 Yamashita also took inspiration from the S30 Z’s interior for the new Z. “One design cue that was inspired by the S30 Z was what we call the ‘reverse slant.’ This refers to the top of the center dash where the air vents are located. The angle here goes in the opposite direction of the bottom portion of the dash, hence the name,” he explained. “What this does is it reduces the “visual noise” in the driver’s line of sight, resulting in an interior where the driver feels safe and secure even while traveling at high speeds.” 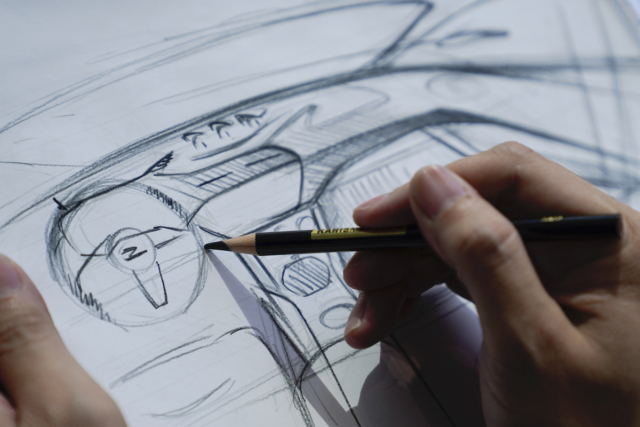 Yamashita also retained the center stack of the S30, with triple gauge pods on top, air vents below them, and climate and audio below that. “We wanted to retain this stacked layout in the Z because it’s not found in many other cars. In particular, I feel that the cabin provides an authentic sports car flavor that’s approachable as a daily driver, much like the interior of the 300ZX (Z32),” he said. 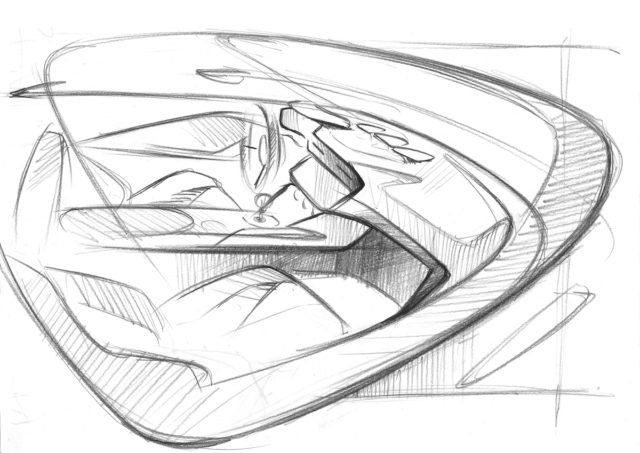 When asked what part he was most proud of, Yamashita described something most people wouldn’t notice. “I’m particularly fond of the view of the dashboard and instrument panel from the passenger side. The top of the dashboard in front of the driver is shaped in a way that invites the flowing shape of the long hood directly into the cockpit. It’s kind of a hidden design that we unconsciously register but it provides a portal between the exterior and interior.” 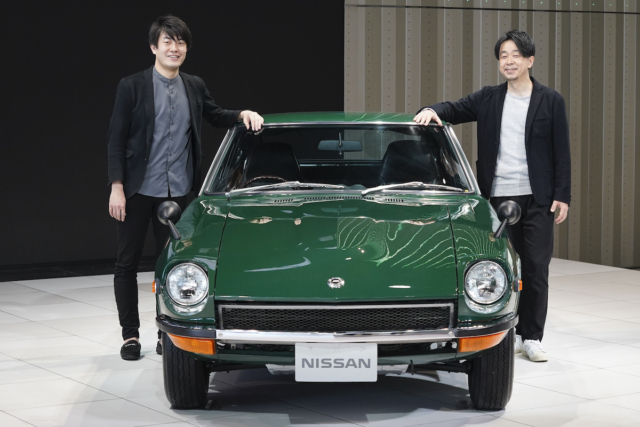 Both men have a long history with the Z-car. “When I was about three years old, my father brought home a Nissan catalogue,” Ohkoshi recalled. “There was a yellow Z on the cover, I think it was an S30, actually. From then on, I started drawing cars, it was like a switch.”

Likewise, Yamashita’s father provided his Z inspiration. “When I was young, my father drove a Z31, and I have been a fan of the Z ever since,” he remembered. “My drive to become an automotive designer was most likely due to the influence of my father and the Z. He also drove a Kenmeri Skyline, but it was the Z I remember the most fondly.”

Each designer then sketched the parts of the Z they were responsible for,  armed with only a pencil, paper, and a clipboard. You can see the results below. 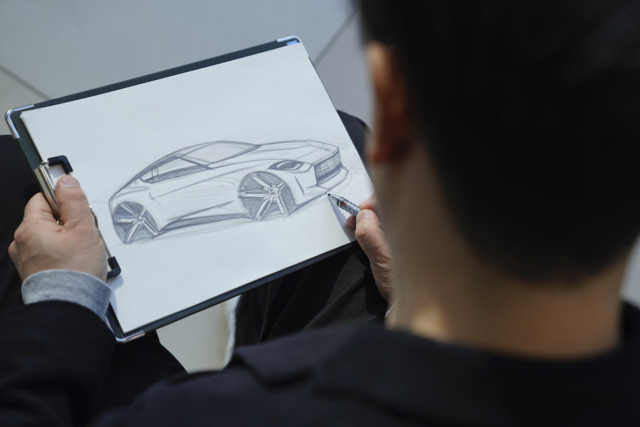 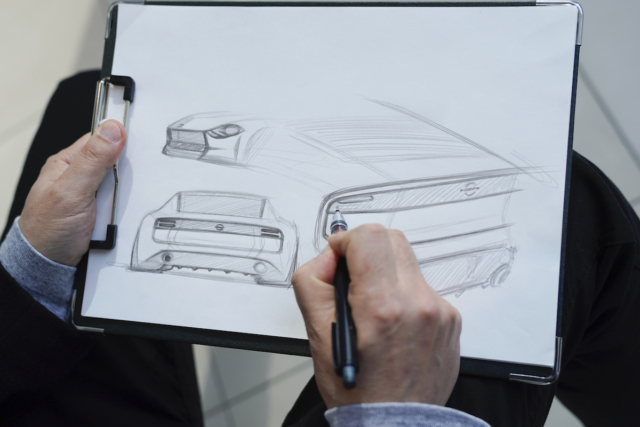 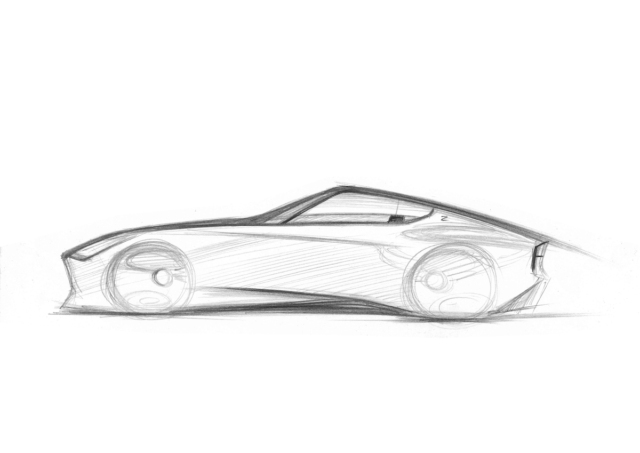 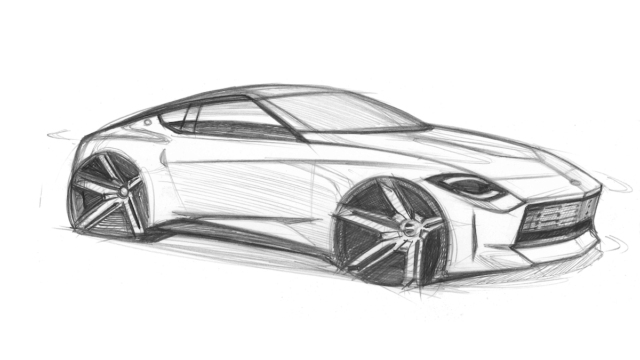 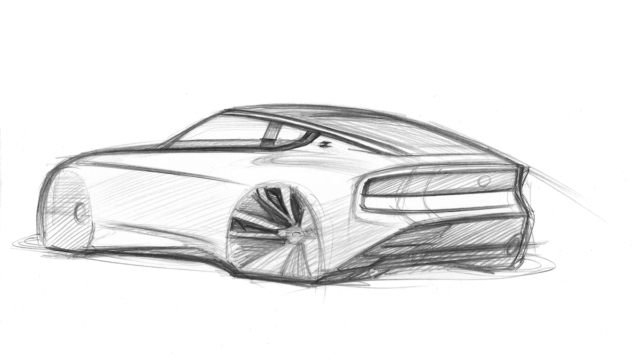 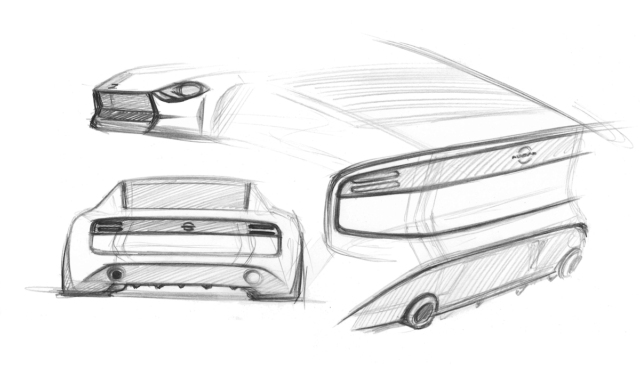 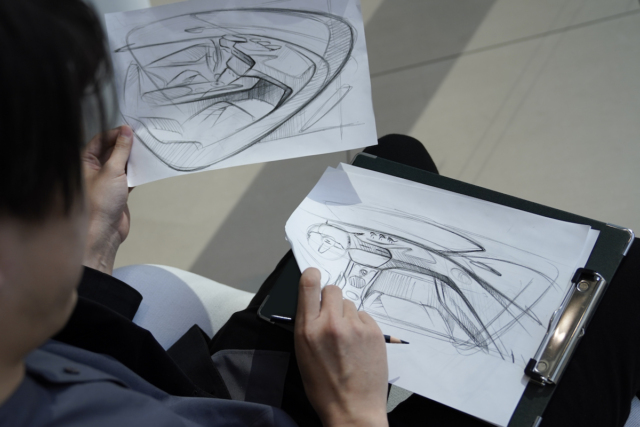 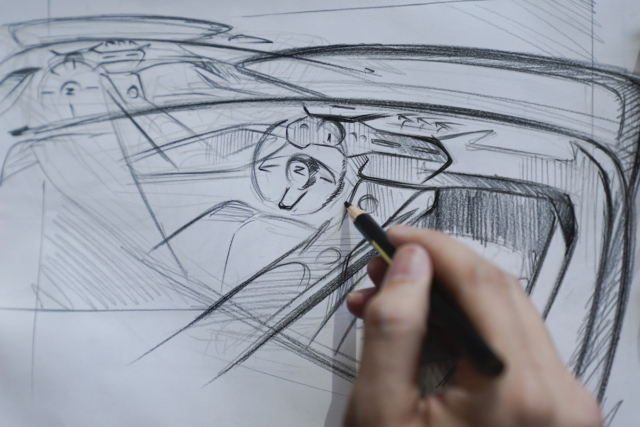 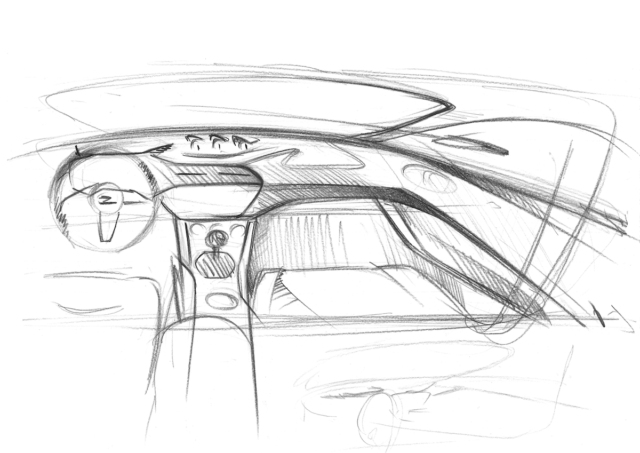 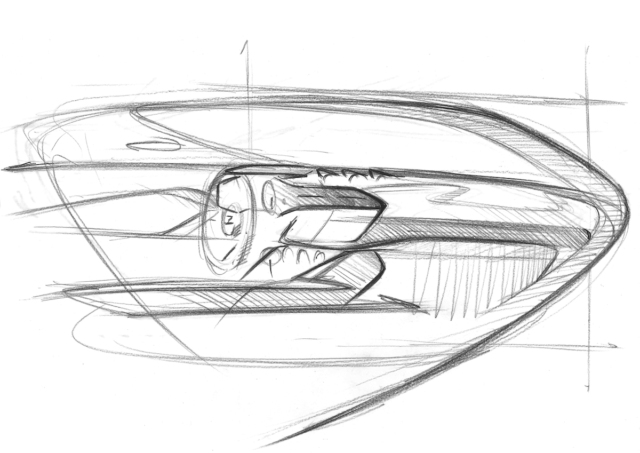 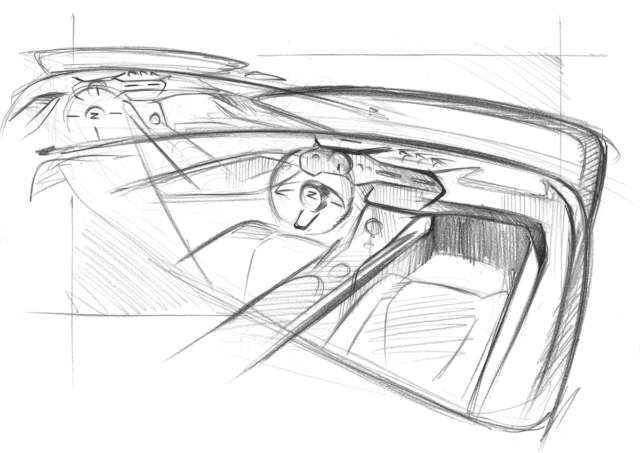 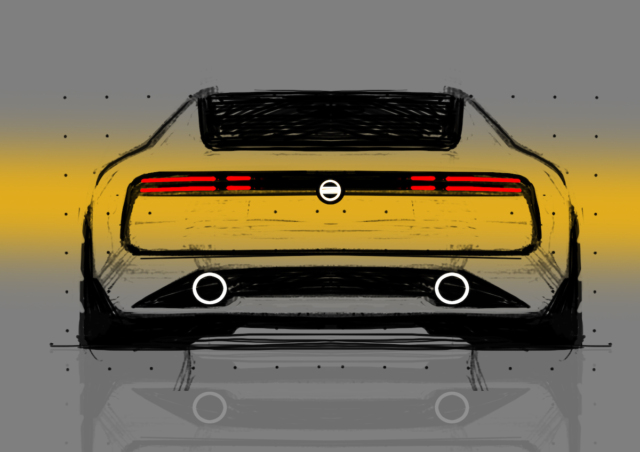