The 1984 Plymouth Colt GTS Turbo Twin-Stick gets glowing review, some 40 years after its debut

It only took 37 years, but the 1984 Mitsubishi Mirage Turbo is finally getting its due. Back in the day the captive import, sold here as the Plymouth Colt GTS Turbo, was not given a ton of respect. Sure, it had some unique features for its time, but the Turbo model’s adjacency to the lowliest budget offering in the cubic inch-obsessed Mopar empire didn’t do it any favors. But times have changed, and a recent glowing review of the Plymouth version made us want to revisit the Mirage Turbo and its under-appreciated, ahead-of-its-time technology.

Somehow, Regular Car Reviews was able to get their hands on what is probably the best preserved Mirage Turbo in the US. Though its upholstery may be plain (Japan offered plaid seats), the burgundy cabin is in amazingly good shape for a car that most owners probably thought of as a disposable commuter.

Introduced in Japan 1978, the original Mitsubishi Mirage was a tiny hatchback built because MMC wanted a piece of Honda’s success with the original Civic. It was their first FF car, and in February 1982 they added the Orion 1.4-liter turbo engine good for 105 PS (104 horsepower) and 112 lb-ft of torque. That made the Mirage the first turbocharged car in its class. By offering the forced induction engine, Mitsubishi could brag that every single model they offered, from the Minica to the Fuso Great was turbocharged. It was the 80s, turbos were sexy, and Mitsubishi definitely wanted to establish itself as a pioneer of the technology. 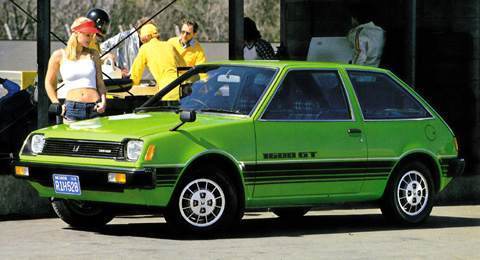 US turbo models got a Saturn 1.6 4G32B shared with the Cordia Turbo, good for 102 horsepower and 122 pound-feet of torque. While all Colts were seen as cheap econoboxes in the US, it was something of an an advanced engineering showcase in Japan. It was the late 70s and emissions compliance was on the mind of every automaker.

The Honda Civic had CVCC, but the Mirage had its own clean-burning system, MCA Jet, which added a tiny intake valve to help swirl the air-fuel mixture. That meant a cleaner burn in the domed combustion chamber — yes, Mopar fans, this thing had a hemi — resulting in fewer emissions out of the tailpipe.

Some versions of the 1.4 Mirage even had a cylinder deactivation system some three decades before it became mainstream. Cadillac beat Mitsubishi to market by one year with its V8-6-4 engine, but it was a trouble-plagued system that was soon abandoned. Mitsubishi’s version allowed two cylinders to be shut off at speed or idle in order to save fuel and reduce emissions.

Of course, all of this was overshadowed by what was known in Japan as the Super Shift, or Twin Stick, as we called it in the US. The unique transmission had four speeds plus a two-speed high-low transfer case, and two levers protruding from the center hump. This essentially gave the Mirage some tire-chirping acceleration in 1st-low, and an excellent overdrive gear in 4th-high. It also happened to be a handy way for Mitsubishi to mate an existing rear-drive engine with a front-drive layout.

Most importantly, though, it was fun to drive. Weighing only 2,070 pounds, the Twin-Stick could launch car from 0-60 in just 8 seconds. That was pretty impressive for the time! Sadly, there are probably close to zero examples left in decent condition. We’re glad to see this one Pennsylvania example registered as Historic Vehicle. Hopefully a few more will come out of the woodwork, and the remaining stock won’t vanish like a Mirage.

7 Responses to The 1984 Plymouth Colt GTS Turbo Twin-Stick gets glowing review, some 40 years after its debut