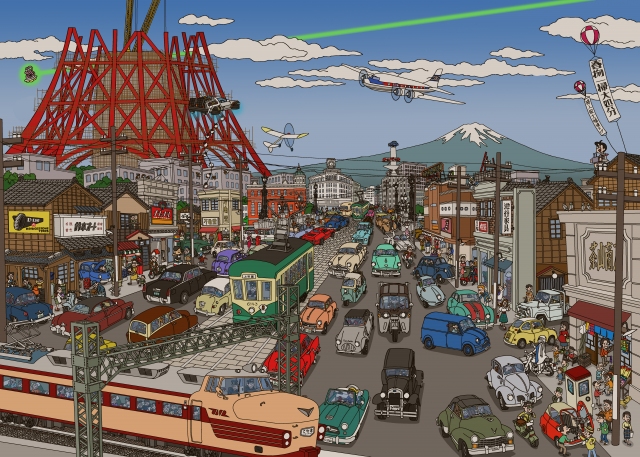 Takashi Matsuyama is a Japanese artist that creates wonderfully rich automotive landscapes in his art. Densely packed with cars, pop culture references, and easter eggs galore, his works are like a vehicular Where’s Waldo? Many of his illustrations were supposed to be on display at Toyota’s MegaWeb showroom in Tokyo starting with the 2020 Olympics, but the pandemic threw a wrench into those plans. So instead, MegaWeb has filmed a virtual tour of Matsuyama’s exhibit. 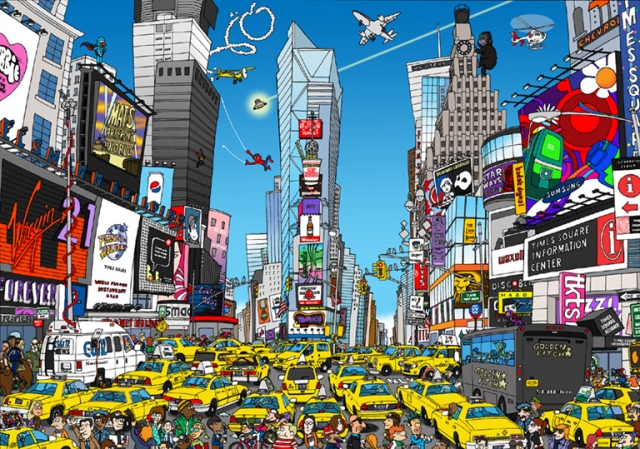 Matsuyama was born in 1957 and worked as second assistant to Akira Toriyama, the creator of Dragon Ball and Dr Slump. Since 2011, he’s also published his own series of illustrations called Motor Panic, which depicted various cities around the world. All of them, however, featured cars at their heart. His Times Square had New York taxicabs of every generation, from Checker Marathon to Nissan NV200. Spider Man, King Kong, and the old Nissin Cup Noodle ad make cameos as well.

In the MegaWeb exhibit, each one of Matsuyama’s works is displayed alongside a representative car. His San Francisco piece (which features an airborne Highland Green 1968 Mustang, the cast of Full House, Dirty Harry, and a Klingon Bird of Prey from Star Trek IV: The Voyage Home) is hung next to the museum’s 1963 Corvette Sting Ray, His Showa Era Tokyo pieces are hung next to an S40 Toyota Crown, and his London piece is hung next to a Lotus Elan.

Times Square took 10 days sketching on paper and then coloring digitally, but by the time he drew Paris in 2014, he had switched to a tablet and electronic pen. Ironically, it took 40 days, says Matsuyama, because he could zoom in and create as much detail as he wanted (which includes an Alpine A310 Group 4 rally car, the Mona Lisa sitting at a cafe, and the Peugeot 406 from Taxi). Matsuyama sneaks his children and himself (always wearing a blue-gray cap) into the drawings as well. Amazingly, in the interview with MegaWeb Matsuyama reveals he’s never been to Paris or London. 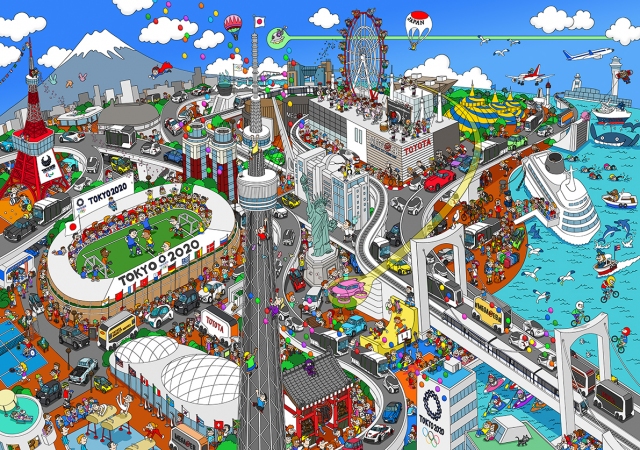 Three of the works were commissioned by Toyota for this exhibit. Tokyo 2020 celebrates the Olympic games that never happened last year. It’s chock-full of Aichi’s concept cars, from the LQ to the Sora Fuel Cell Bus. But, look closely and you’ll also find a Century, GR Supra, and even a USDM Tacoma. 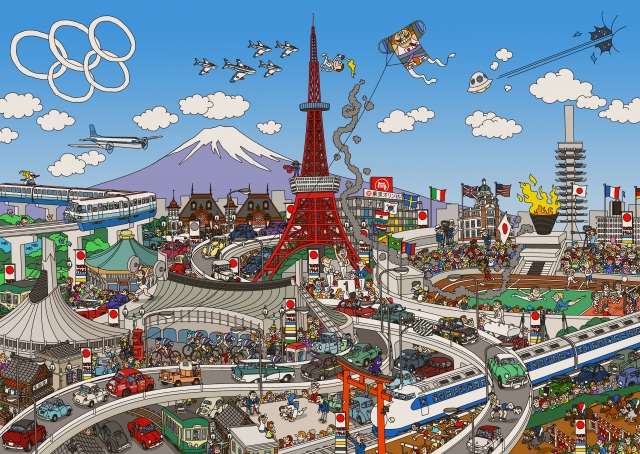 Another Toyota commission is Tokyo 1964, depicting the last time the Olympics came to Japan’s capital. Here you’ll see tons of JNC content, like Mobilgas Trial entries from Toyota and Nissan, the original Shinkansen bullet train, and everything from a Subaru 360 to a Prince Skyway wagon. 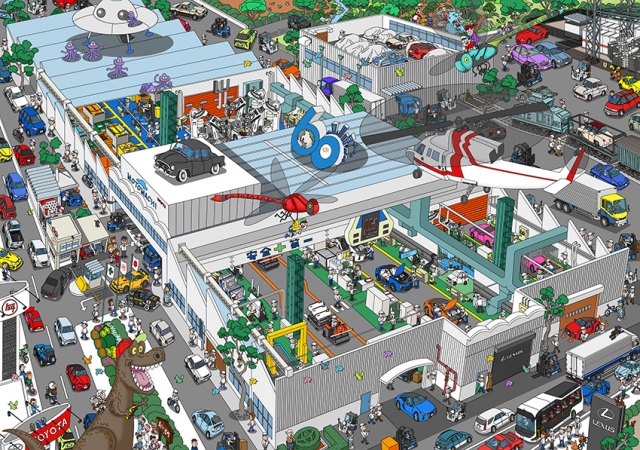 The third and final Toyota commission is probably our favorite. Motomachi celebrates the 60th anniversary of one of Toyota’s most famous factories. It contains many iconic Toyotas, from an A70 Supra to an Estima to the Lexus LFA. 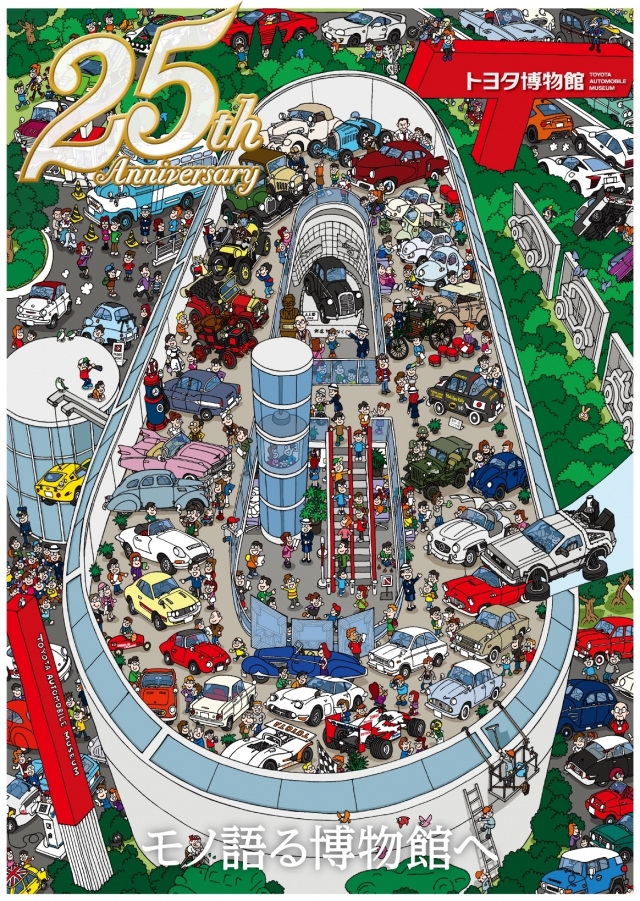 Toyota and Matsuyama go back a while. In 2014 Toyota commissioned another drawing to celebrate the 25th anniversary of the Toyota Automobile Museum. Not only does it contain a 2000GT, Celica, AE86, Supra, and tons of famous Toyotas, but also a gamut of cars from other marques, just like the museum itself. 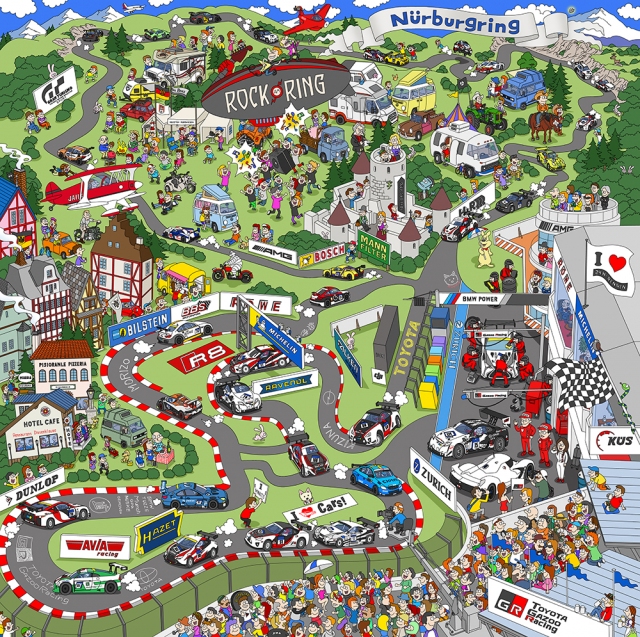 You can see more of Matsuyama’s art on his website, Art-Front, as well as his Instagram account. On the latter he’s posted a lot of works paying homage to movies, but usually with a car taking center stage, of course. There’s Gary Sinese’s Isuzu VX-02 from Mission to Mars, Juno with her Toyota Previa, and plenty of non-Japanese cars picture cars as well. You could spend hours looking at Matsuyama’s work and still discover stuff you’ve missed each time you returned to it. Let us know what cool stuff you see in his art.