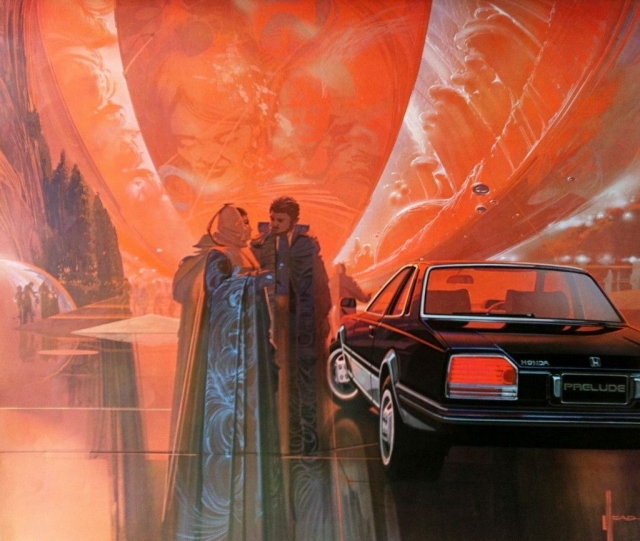 On December 30, 2019, Syd Mead passed away at the age of 86. The legendary concept artist almost single-handedly shaped our visions of tomorrow, having designed the futures seen in films such as Blade Runner, Alien, Tron, and the Star Trek movie. However, it was Mead’s illustrations of a bright and optimistic human destiny that excited a generation and became his signature style. He worked with many companies, dreaming up utopian showcases for their products, and it should be no surprise that Japan’s top carmakers were among them. 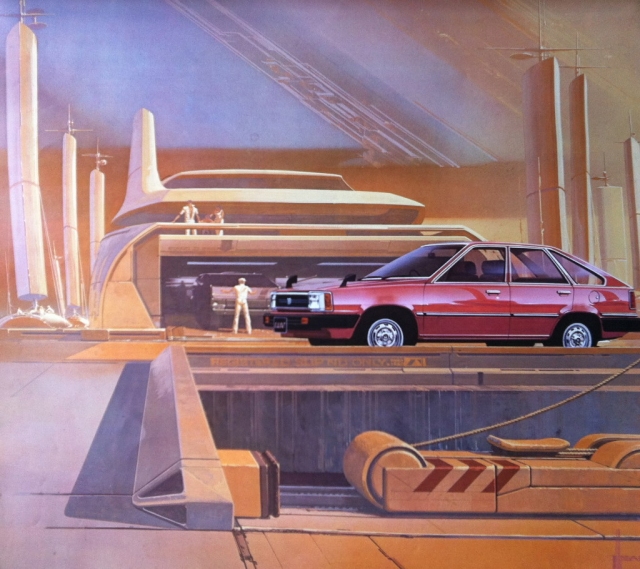 Born in St. Paul, Minnesota in 1933, Mead showed a natural talent for drawing from a young age. After serving three years in the US military stationed in Japan, he graduated from the renowned Art Center College of Design in 1959 and was immediately hired by Ford. After three years there, he worked for a variety of companies including US Steel. “I was probably the only one that was drawing vehicles buried into elaborate scenarios with people and things,” Mead said in a 2015 interview. They were exactly the kind of cars we grew up imagining, what we had in mind two days ago when composing our Question of the Week, What did you think cars would be like in 2020?

In the 1970s, Mead began striking out on his own, with clients such as Phillips Electronics, Star Trek: The Motion Picture, and Toyota USA. For the launch of the T80 Corona, Mead painted stunning portraits of the new sedan. The works appeared in Toyota Today, a magazine published by Toyota USA for its dealer network.

Through the 1970s, Mead was hired by everyone from Hollywood to NASA. In the early 1980s (probably 1981 judging by the cars), Honda’s Verno dealership chain in Japan commissioned a calendar titled “To the Future” with six illustrations of their lineup. Cars included the Prelude, Ballade (similar to the second-generation Civic sedan), Vigor (similar to the second-generation Accord), and the five-door Quint, all placed in Mead’s imaginative futuristic settings.

Mead was hired to design vehicles for 1982’s seminal science fiction film Blade Runner, set in 2019. However, The backgrounds that he set the cars in, in part influenced by what Mead had seen of Tokyo in the early 1960s, impressed the filmmakers so much that he was hired to create the look of the cinematic world. 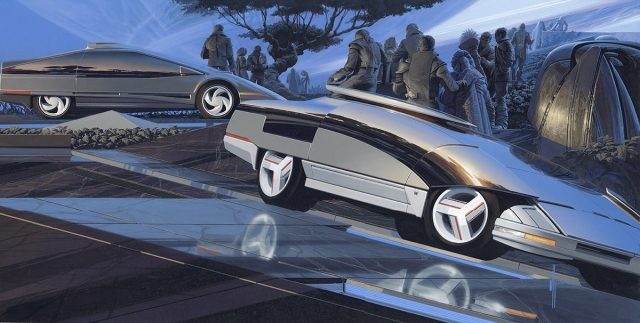 A year after its release, Mead returned to Japan and began working extensively with Japanese companies such as Sony, Minolta, Seibu, NHK, Tiger, and the advertising giant Dentsu. His work even percolated to one of the most well-known aftermarket wheel companies, as seen in an ad for Super Volk wheels by Rays. 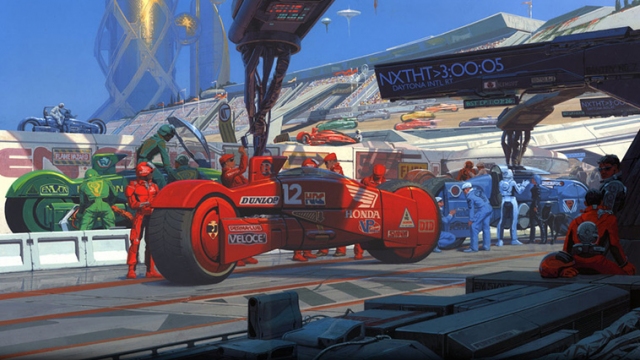 The feedback loop helped create some of the most recognizable vehicles from Japanese pop culture. Katsuhiro Otomo, creator of Akira (also set in 2019) said that the star motorcycle was inspired by the lightcycles Mead had designed for the original 1982 Tron. In 2004 Mead was commissioned by Honda’s powersports division to create the above mural to inspire the company’s designers. The bike of the future in turn bore a strong resemblance to Kaneda’s bike in Akira.

Mead also contributed designs to Yamato 2520, the short-lived sequel to Space Battleship Yamato and was commissioned to create several of the mechs in 1999’s Gundam spinoff, ∀ Gundam. And, if you’ve seen the inside of Mattel’s design center, until recently a giant Mead mural dominated one end of the Hot Wheels section. The Sentinel 400, a car that featured in several of Mead’s drawings, even got its own diecast treatment.

In 2010, Mead was commissioned by Toyota USA’s ad agency to illustrate two more ads, this time for the Camry Hybrid. It was a full-circle return to his early work with the Japanese carmaker. In the words of Hot Wheels designer Ryu Asada, another Art Center grad, “Mead had a magical talent that could turn even mundane cars into a sci-fi jet fighter.”

There aren’t many individuals who can truly embody the title “futurist.” Mead was an unfathomably gifted artist whose depictions of the coming centuries inspired and influenced countless other designers and creators. Whether people realize it or not, there is likely no one whose life he hasn’t touched.