There was a Subaru 360 on The Sopranos, youse guys 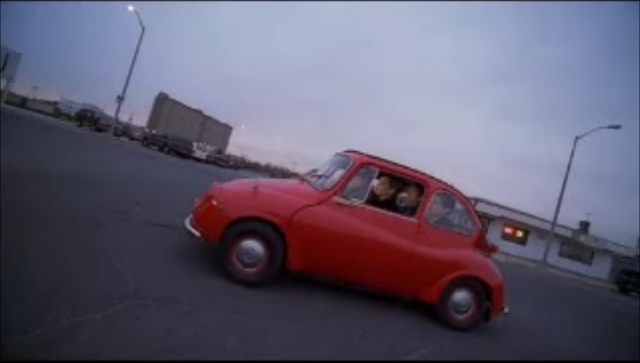 Last week we asked what show had the best background JNCs. I had no idea at the time that I would find one of Japan’s iconic kei cars on HBO’s groundbreaking Y2K-era mobster drama, The Sopranos.

I’m spending my coronavirus quarantine watching The Sopranos for the first time because back when it aired originally I was too poor for HBO. In the last episode of season two, mob boss Tony Soprano — played by the 6-foot-1, 275-pound James Gandolfini — gets a nasty bout of food poisoning and has a bizarre series of fever dreams. In one of them, he climbs into a car has a brief conversation with two of his enforcers. One hands him a roll of toilet paper because in the waking world he has terrible shits, and then the car is revealed to be the Subaru 360.

Yes, sadly the car is in a dream sequence and not the “real” world. I suppose they needed an odd-looking small car for the sight gag, but I’m surprised that in this heavily Italian story they didn’t use an original Fiat 500 or Autobianchi or something. Perhaps it was the New Jersey-centric show’s heartfelt tribute to the only car company with headquarters in the Garden State. That Gandolfini and three others were able to fit in the kei car is either a surprising physical feat or evidence that the 360 is quite spacious inside.

I only finished season two last night (so no spoilers in the comments please), but so far I’m loving all the 90s-era cars in the show. I’m constantly annoying my wife by rewinding to fleeting establishing shots so I can check out the Infiniti Q45 in the background, Acura RL being driving by a minor character, or Mitsubishi Van used on a show within the show.

And who could forget that one of the very first scenes in the very first episode has Tony talking about his nephew and a mob deputy Chris, saying, “Keep in mind this is a kid who just bought himself a $60,000 dollar Lexus.” That car is soon revealed to be a sweet F20 LS400 in Black Onyx. It’s a great choice for Chris because he’s a young up-and-comer, while the old guard is still driving Cadillacs with faux convertible tops. Of course, this being The Sopranos, Tony promptly uses that $60,000 Lexus to run over a guy that owes him money.

1 Response to There was a Subaru 360 on The Sopranos, youse guys