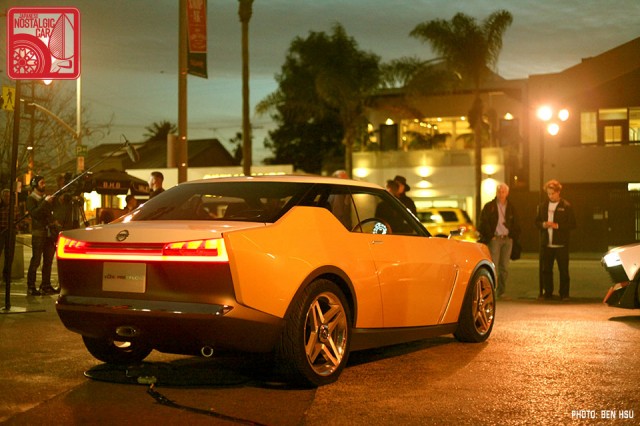 Over the weekend Nissan did something very unusual. They took their priceless, one-of-a-kind concept cars all over SoCal to meet the public face to face. This would’ve been a ballsy move for any concept, but for the Nissan IDx siblings, the most talked-about show cars of the year? This was unheard of.

We’d already seen the Nissan IDx Freeflow and IDx NISMO at their Tokyo Motor Show debut, but that was a completely different environment. Sitting on stage surrounded by the sweeping architecture of an auto show booth, you get no sense of scale or natural light. So when Nissan’s PR team invited us to the IDx’s street debut, we couldn’t turn down the opportunity to glimpse what the company’s most important concept in a decade would look like on American pavement.

Usually when automakers hold these press events, it’s at a rented studio closed off to the public. Nissan didn’t do that. They parked their million dollar concepts on the only lot along Abbott Kinney Boulevard, named after the neighborhood’s eccentric founder and the trendiest street in the already trendy locale of Venice, Los Angeles.

So what’s it like? Well, when we saw it on stage at the Tokyo Motor Show we thought it looked rather large, but amongst lumbering luxury SUVs and Camry taxis its true size is revealed. It’s about the size of an S13 Silvia. It’s quite small by today’s standards, and we only hope the production version stays true to its lightweight mission.

In sunlight, you also notice some contours and creases along its flanks that are hidden under indoor lighting. It looks more svelte, more taut, like a katana ready to strike. It’s also more aggressive when taken out of the hyper-angular futuristic environment of Tokyo and plopped among LA’s more organic and imperfect shapes.

Comparisons to heritage cars from other automakers are inevitable. But take the Dodge Challenger, for example. It’s enormous, a barcalounger dressed up like a muscle car. It’s built for those who imagine themselves as rebels without a cause but rarely drive like it. The IDx, on the other hand, looks purposeful, a partner you can dance with. It’s clear at first glance that it’s not just for straight line cruising.

Of course, there’s the tiny issue of the automatic transmission. Initial reports from Tokyo mentioned a CVT, the harbinger of doom that would negate any goodwill towards enthusiasts. We’ve had spirited discussions here at JNC about that very issue, and we told the Nissan reps straight up that JNC readers will march on Nashville with torches and pitchforks if a manual isn’t offered. “Oh we are aware,” they said, “The message has been received loud and clear.”

One thing’s for sure. It draws crowds. From press to random passers by out for a night on the town to Peter Brock himself, the IDx turned heads. As the sun set, Nissan flicked the IDx’s lights on. Once again, a completely different look than on the turntables at Tokyo. Here, real world darkness gave the illumination an opportunity to stand out on its own. The Freeflow’s taillights in particular are works of art, and the instrument clusters on both cars are dazzling.

The next morning Nissan would bring the pair to the original Cars & Coffee at Mazda HQ, then to the Petersen Museum during a Q&A with Peter Brock. Next it would appear at Supercar Sunday in Woodland Hills. Nissan is acutely aware of the interest these cars are generating and they are on the right track by listening to us, the enthusiasts.

69 Responses to NEWS: Street debut of the Nissan IDx Concepts