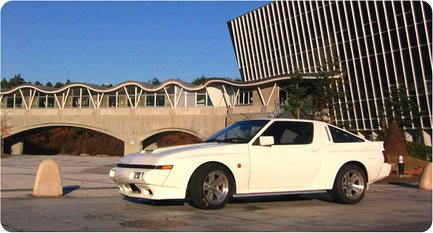 With the release of the impressive new 2008 Lancer, it got us here at GrandJDM thinking about great Mitsubishis of the past (hey, we’re not just Nissan and Mazda whores here!) In 1982, Mitsubishi’s best sports car was the Starion. Today, Mitsubishi’s brand image is so infused with the Lancer Evolution, that it’s hard sometimes to remember that at one time, they had a good RWD turbo sports car in the proper old school idiom.

The Starion was released in 1982 and was sold in most markets. Power was by a “Sirius” 2.0L 8 valve four banger with a non intercooled turbo. Technology was definitely of the old school with single point injection (ie one giant fuel injector to handle the whole engine!) but power was quite reasonable at 168hp. Suspension was independent Macpherson strut all round with an optional LSD. Weight was a slightly porky 1250kg, some of which can be explained by the massive doors, which are reinforced to take the seat belt mounts (that’s right, the seat belt reel and top buckle are not on the B-pillar but on the doors). The Starion was also larded with heavy luxury equipment like electric leather seats, etc which added to the pounds.

But no matter. In its day, the Starion was a very well regarded sports car, and magazines of the day would see fit to compare it to more expensive euro coupes like the Porsche 924 and 944. And while 168hp may not sound like much today, it was enough to propel the Starion to the quarter mile in a touch under 16 seconds. To give it some perspective, in 1982 the Honda Prelude only had 105hp, the Mazda RX-7 115hp, the Celica (the SOHC version most western markets got) only 90hp and even the Porsche 944 could only muster 160hp. The Starion was fast, and magazine reports of the day said that it handled very well, with the only criticisms being a lack of steering feel and a slightly snappy tendency when the tail transitioned into oversteer. 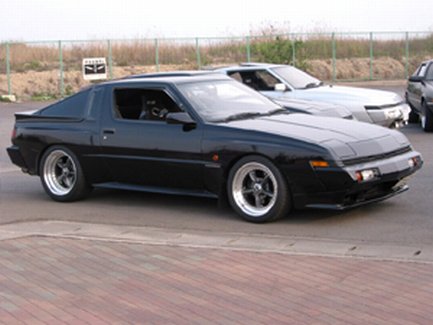 Over the years, Mitsubishi refined the Starion, first adding a 3 valve per cylinder “Sirius Dash” motor for a healthy increase to 200hp (in the Japan market anyway). But the finest iteration of the Starion was saved for the last 2yrs of production. In 1987, the Starion was restyled to incorporate huge flared wheelarches, with what must be the all-time perfect oem wheel fitment: 16×7+18 and 16×8+0 (zero offset!) staggered-offset dished wheels (why don’t more manufacturers do this?). Under the bonnet, the 200hp 2.0L 12V Dash motor was no longer found, replaced by a SOHC, 8valve 2.6L motor with turbo and intercooler. Notwithstanding the significant displacement increase, power fell to 175hp.

In terms of motorsport heritage, the Starion was not found wanting either (and no…being Jackie Chan’s ride in Cannonball Run II doesn’t count) . The 1980s meant Group A on the circuits and Group B on the rally stages, and Mitsubishi had a decent attempt at both. 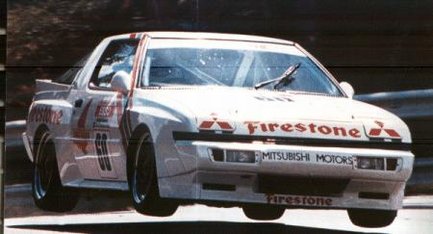 In Group A, the Starion was developed to a heady 450hp and in fact held the top speed record at the Australian Mt Panorama circuit in Bathurst at one stage. However while it was sometimes in contention, things never really happened for the Starion and as a result there are only a few race wins here and there to its credit. The main problem was simply that it wasn’t in the same league as the dominant car at the time, which was either the BMW M3 or the Sierra Cosworth. In Group N showroom stock racing, however, the Starion was more successful, picking up a few championships in Australia. 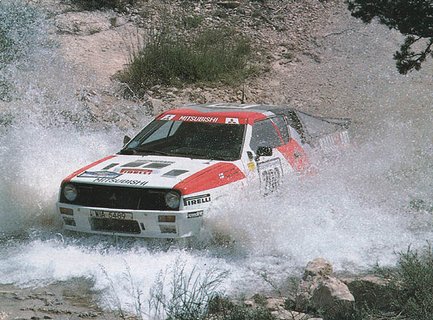 In Rally, the main weapon for Mitsubishi in those days was the Lancer EX Turbo: a small RWD sedan with a 1.8L turbo. As interest in the Group B rally scene grew to a fever pitch, the old Lancer was quite outgunned by purpose built AWD rallycars like the Peugeot 205T16, Audi Quattro Sport, and Lancia Delta Integrale. Mitsubishi planned to raise the stakes by fielding a AWD Starion. The prototypes were built, and even rallied in a few small events as trial runs, but by the time it was ready to race, Group B was cancelled as the result of the huge speeds of the 650hp monsters, which caused some terrible accidents involving spectators. Group B was replaced by the tamer Group A and in 1992 Mitsubishi would release the Lancer Evolution, win 4 world rally championships, and the rest as they say is history.

By the time the Starion bowed out in 1989, it had been in production for a remarkable 7yrs. In contrast with the glowing, Porsche-beating reports in the early 80s, at the end of that decade, magazine reviews began to complain about the outdated interior and excessive turbo lag.  So the Starion began to seem quite old fashioned as JDM manufacturers readied themselves for the high-tech speedfest that was the following decade, a decade that brought us the R32 GTR Skyline, Supra twin turbo, RX7 twin turbo, Honda NSX and of course Mitsubishi’s own 3000GT supercar and the Lancer Evolution.

But by that time, the Starion had really done it all. It had good magazine reviews, good motorsport pedigree, and it ended the series with a bang with the GSR-VR, a car that is bound to one day become collectible. Maybe one day, Mitsubishi will again embrace its old school, RWD roots. But until then, light a candle for the old Starion, a good car.