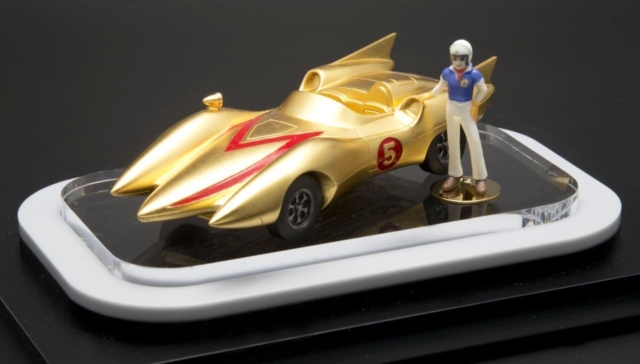 The seminal Japanese racing cartoon Speed Racer debuted in 1967 and became a bona fide worldwide hit. It didn’t just influence a generation of gearheads, but it was one of the earliest examples of anime introduced outside of Japan. This year marks the 55th anniversary of Speed Racer, and to commemorate the occasion the production company has licensed a 24-karat gold model of the star car, the Mach 5, that costs ¥5,500,000 ($44,000 USD).

The golden Mach 5 will be on display at the Takashimaya department store at Nihonbashi, Tokyo from April 13-18 along with other gold artifacts such as Buddhist altars and sake sets. Then it’ll be transferred to whomever is lucky (or crazy) enough to buy the one-of-a-kind item. It may seem like a lot, but as one of Japan’s first cultural exports, which just so happens to be car related, we’re sure there will be someone wiling to cough up the dough.

permalink.
This post is filed under: minicars and
tagged: speed racer.