JNC THEATER: Someday Into the Glare

Though it came out in 1992, there’s still plenty of 80s car-nage in Kinji Fukusaku’s Someday Into the Glare (English title, The Triple Cross). Fukusaku’s ultra-violent crime stories were a staple of Japanese cinema in the 70s and 80s, but by 1992 a new crop of new filmmakers had rose to prominence. Fukusaku wanted to prove he still had what it took to compete with the young bloods after a few years dabbling in ancient samurai and horror flicks, so he returned to the subject he knew best — bank robbers, bullets and betrayal. Naturally, there are plenty of car chases. 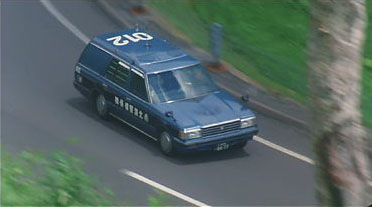 Glare tells the tale of veteran bank robber trio who partner with a twenty-something upstart to take down ¥200 million from an armored car in Hokkaido (Yes, in Japan armored cars are wagons like this Toyota Crown). However, the bleached-hair punk double-crosses them, killing one, wounding another, and stealing the girl of the third while taking all the loot. It’s up to Kenichi Hagiwara‘s Kanzaki to exact revenge in a pursuit that only escalates in violence, property destruction, and body count of innocent and not-so-innocent bystanders.

The main cars are used in the film are Kanzaki’s first-gen Nissan Terrano (aka Pathfinder) and the bad guy’s third-gen Pontiac Firebird, while Toyota Crown cop cars and yakuza sleds fill up the chase fodder roles. The chases are a lot more fluid than in Fukusaku’s earlier work like Boso Panic, but of course the cops are still portrayed as bumbling idiots who waste millions of tax yen in police cars. 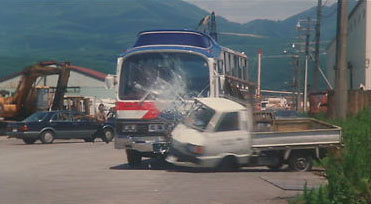 It is said that the Fukusaku blew the budget because of the car chases. Three Terranos and two specially prepared Firebirds were used for the main vehicles. 20 patrol cars were destroyed by the Terrano in a single scene, and throughout the film various Crowns, a Liteace and even a Mitsubishi bus are destroyed. Supposedly, a typhoon also struck Hokkaido during filming, complicating production. Ultimately, the production company that financed the film went bankrupt. Watch the trailer below.

3 Responses to JNC THEATER: Someday Into the Glare