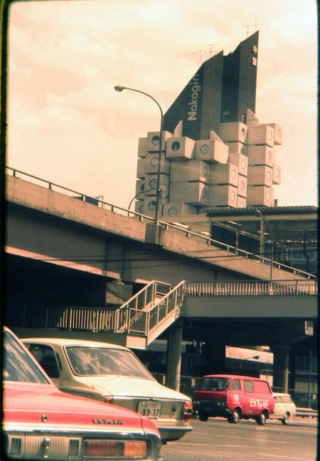 Designed by Kisho Kurokawa, the Nakagin Capsule Tower is one of Tokyo’s most famous buildings, and a symbol of Japan’s post-war emergence as an innovator of industrial design. The building consisted of two concrete towers and 140 modular capsules, each of which could be a standalone unit or linked with other capsules to create larger spaces. If one needed to be replaced or modified, it could be done so by removing it and not affect the rest of the building. It was like life-sized Lego blocks you could live in.

Construction finished in 1972, just as another then-futuristic design was hitting the streets — that of the Kujira Toyota Crown, the red car in the foreground. Its bizarre tiered grille was as avant garde as the Nakagin Capsule Tower, and both served as signs of a hopeful era. An E10 Corolla, HiAce, and what appears to be an older generation Crown wagon also sneak into the scene, making it a four-for-four Toyota snapshot.

Unfortunately, the Nakagin Capsule Tower has since fallen into disrepair. It occupies a very expensive plot of real estate in the Shimbashi district of Tokyo and was almost demolished in 2006. Architectural preservation organizations have managed to stave off a tear-down, but have not raised enough money to properly restore it. It currently sits in limbo, awaiting its fate.