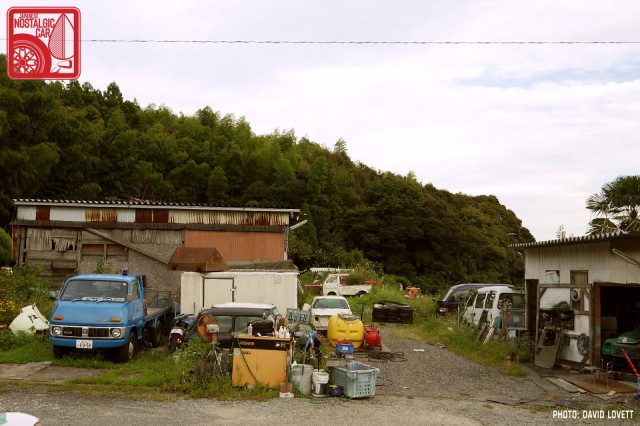 In Part 01, we headed up to Gifu to visit a shop called Standards, which had a mind-blowing amount of Showa goodies hidden in every nook and cranny. After going into Showa overload, Yokoyama-san, the owner, asked if we wanted to see his backup lot.  Yes, please! So we hopped in his car and set off.

The lot was just a 10 minute jaunt away and nestled perfectly at the base of a small hill completely covered in trees. The first thing that caught our eye was the 31-series Nissan Cedric wagon begging for a full restoration.

As it turned out, it was the very car that inspired Yokoyama-san to quit his salaryman day job and start his shop. It wasn’t the only Cedric wagon he had on site though. Hanging out in the grass was another one of the curved ¾-glass beauties ready to donate parts.

Off to the left of the first Cedric wagon was this a Daihatsu Hijet slowly fading away. Beside that, a W180 Mercedes-Benz from the fifties. Across from that on the lift is a rather sad sight, a little Daihatsu Midget slowly being swallowed by the earth.

Moving further towards the back of the lot, we were bombarded with classics sitting in the grass, letting cancer take them slowly. A Mazda Bongo looked to still be in the fight, but if the neighboring Suzuki Jimny was any indication its future wasn’t looking very bright.

A red Toyota Publica sedan was flanked by a Subaru 360 stacked on top of an old Mitsubishi Minica sedan.

To be fair to Yokoyama-san, these aren’t all his cars.  He shares this lot with a few of his buddies and they all split the rent. He keeps some of his nicer cars in the back under a covered area. Take his very clean Isuzu Gemini, for example.

He also keeps his personal Mazda Carol 360 stashed back there as well. From the back it looks like a standard late model Carol. A trip around to the front reveals an early model Carol nose. This is because the car was originally an early model, but it had been rear ended. The car was then rebuilt pulling parts from where he could get them, namely a late model parts car.

Moving back away from Yokoyama-san’s little corner, we find ourselves confronted with a truly unsalvageable Honda Life Step Van.  These came with the same little 36 hp, twin-cylinder four-stroke engine in a Honda Life.

Yokoyama-san’s friends weren’t letting all their cars die though. An old Fiat 500C from the 1950s was receiving some much needed attention, as was an Mitsubishi Minica Ami 55.

The theme from Yokoyama’s shop continued here with a plethora of Showa items strewn about. A small shed was crammmed full of post-war items, including an old metal sign that looked right at home amongst all the old cars.

It was around this time that we were getting ready to call it a day, but Yokoyama-san had one last ace up his sleeve. He looked at us and said “I got a friend who has some cool old cars at his place, want to go check it out?” “Um, absolutely!” we replied. He whipped his phone out, made a quick call and then we were on our way.

We wound our way through the neighboring city of Ogaki and blasted down some skinny backroads. Soon we arrived at Yokoyama’s friend’s personal residence, and was clearly an automobile fanatic. Right out front, despite being covered up, was the unmistakable shape of an S30 Fairlady Z.

Further in was quite possibly one of the rarest 360cc era kei cars ever made, a Daihatsu Fellow Buggy. It was essentially a rear-wheel-drive Daihatsu Fellow, which was already quick for a 360cc car, with all the heavy steel stripped away and replaced with fiberglass. Lightweight, RWD and open top: This has definitely got to be one of the best 360cc keis ever built.

The nice gentleman let us climb all around his property checking out the treasures he had hidden away, such as a Honda S600 frame. You can really see how the chain drive system is set up to give a sort of independent rear suspension from a solid axle.

Hidden out in that same container was an immaculate looking Subaru 360 and an old Daihatsu Midget making full use of its tiny bed.

The kindly old gentlemen then led us further back into his place and the awesome just kept on rolling. An immaculate first-generation Toyota Corona was sitting pretty under some plastic. I had never actually seen one of these in person before and it definitely looks like it’s straight from the 1950s. Despite being stored under some flimsy plastic, the Corona appeared to have been very well looked after as there wasn’t a scratch, ding or imperfection anywhere on it.

Next to the Corona he had an old Toyota Publica with some very square fog lights. Aside from the stuff stacked onto it, it also appeared to be in very good condition. Then the gent pointed at a car under a cover and said “Cedric.” He pulled the corner up and revealed that while it was indeed a Cedric, it was actually an incredibly rare first generation 30-series.

As we were following him back out to the area where we first came in, we inquired about the massive pond off to the side. Turns out he raises koi for competition and the pond was where he kept his biggest competition-ready fish. Without a reference in the photo to give a sense of scale, it’s hard to grasp how big these fish really were, but some of them were easily over a meter long.

Past the koi pond were more cars. A late model Mazda Carol 360 two door that was being used as a parts car and an early model Carol sitting next to it that was in very good shape. We were then shown to another container, atop which sat a very sad looking first generation Publica sedan. Inside, however was an extremely rare first generation Toyota Publica convertible. The car was beautifully restored and every last little detail was perfect, particularly its fog lights, which looked almost integrated into the grille.

And on that high note, we thanked the kind gentleman profusely for letting us traipse through his property and then set off back to the Standards main shop. Once there we thanked Yokoyama-san for the tour and bid him goodbye.

Standards is without a doubt one of my new favorite shops in Japan It’s not just the cars, but the atmosphere created by the collection of Showa era objects. Plus, Yokoyama-san is one of the nicest and most genuine guys I’ve ever met in Japan.

That concludes our tour of Standards, but in case you missed it here’s Part 01.