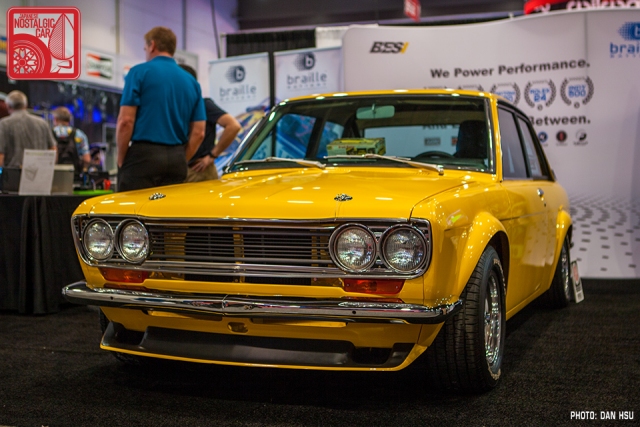 When there are 2,400 companies and 2.2 million square feet of exhibits, limits are constantly pushed in order to garner attention. It can result in show cars that are insanely expensive but absent of taste. Still, there can be gems hidden in the massive three-hall circus of automotive excess. 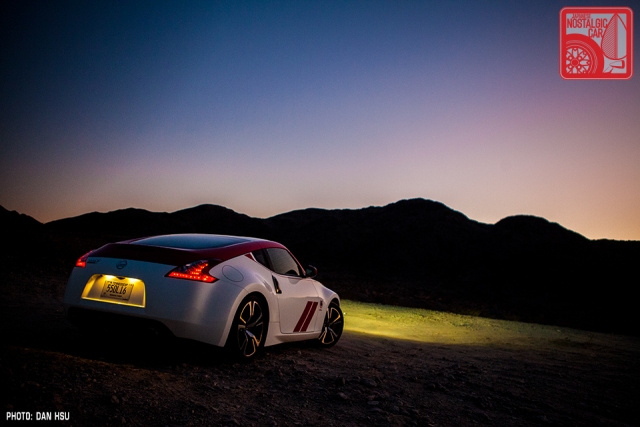 We headed out to the industry showcase in a 370Z 50th Anniversary Edition courtesy of Nissan to see the classic Japanese taking their stands in Las Vegas. We were hoping that with 2019 being the golden anniversary of the Z, we would see an even stronger Z presence at the world’s largest tuning show. Alas, it was not to be. Still, there were some interesting Japanese builds that piqued our interest. 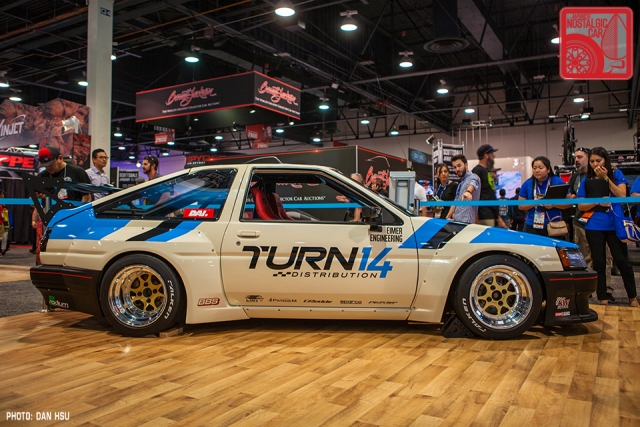 Nearly every Japanese drifter harbors a deep love for the AE86 somewhere in their hearts, and Dai Yoshihara is no exception. With the help of Turn 14 Distribution’s deep catalog of aftermarket partners, he was finally able to build what he calls his dream AE86. 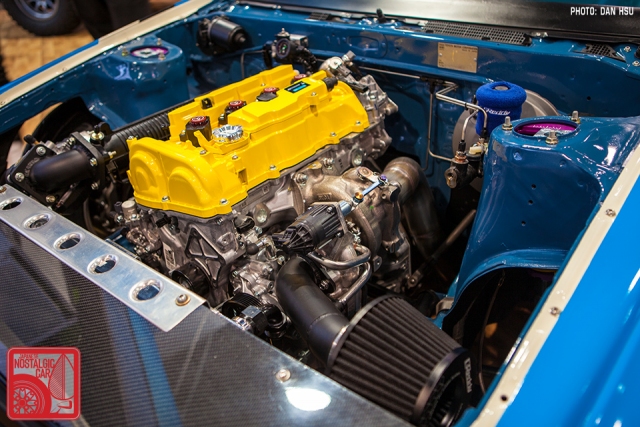 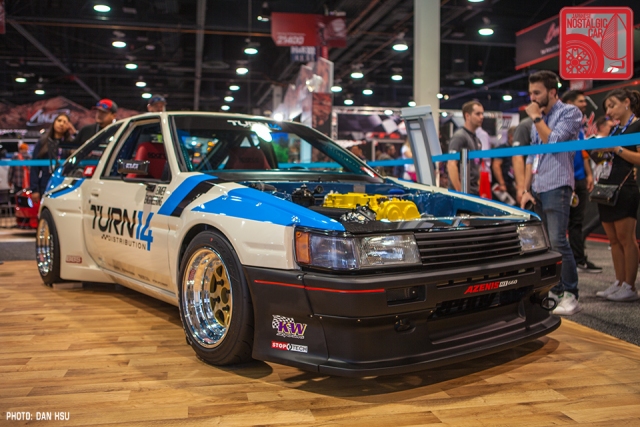 Dai says it’s built for both drift and grip, but it’s definitely all business. Wearing a Rocket Bunny Pandem kit over a full race chassis and K20C1 from an FK8 Civic Type R mated to an S2000 transmission, it’s perhaps blasphemous to some. But, it’s described as 1984 model so it should have started life as an SR-5 and not a true GT-S. In any case, it’s great to see the ol’ Hachiroku still creating a stir at SEMA 35 years after its debut. 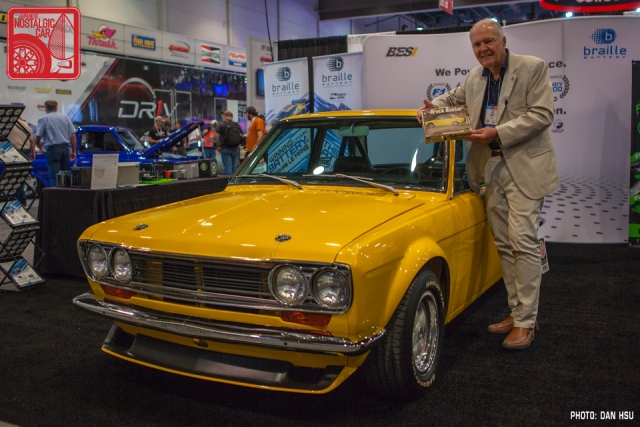 The yellow Datsun 510 at the Braille Batteries booth might have looked any number of tasteful Datsun builds, but that’s because it was the one and only original Brock Buster. Built by BRE founder Peter Brock popularized in  Motor Trend in 1973, it became the definitive modified 510 in the US. 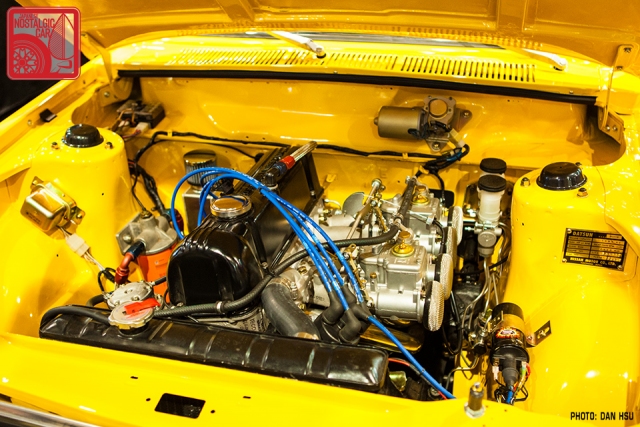 It featured parts inspired directly from the race car that John Morton drove to back-to-back SCCA 2.5 Trans-Am victories: fiberglass fenders and hood, a blueprinted engine with racing internals capable of 130 horsepower, a lowered suspension with stiffer springs and sway bars, and roll cage. The car inspired legions of Datsun tuners in period and even got its own Revell model kit. 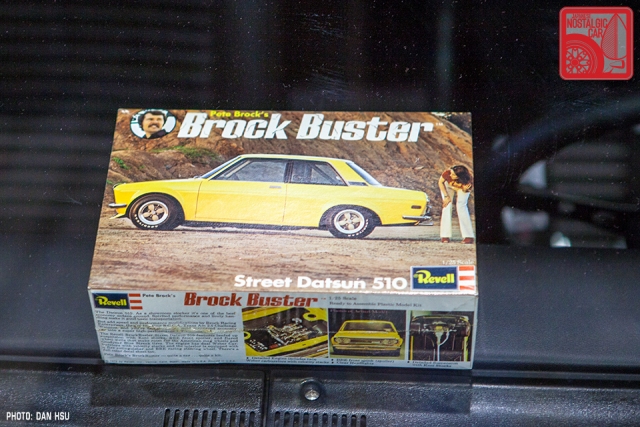 Originally, Peter named it the Screaming Yellow Zonker, but legally speaking that name belonged to a popcorn brand. The Motor Trend article called it the Brock Buster instead, which we think is a better name (but we could be biased simply because it’s been known as that for so many decades). “Why yellow?” we asked. Peter responded with a wry grin, “Because it photographs the best.”

Founded in 1950, Daikin Manufacturing has been a strong supporter of the aftermarket with its Exedy brand of performance clutches. This year, their booth car was an absolutely insane KP61 Starlet time attack car with an S2000 motor under the hood.

At the Performance Auto and Sound booth we found a pair of tuned 90s Nissans that some would consider sacrilegious. A Z32 and S13, the latter with an S15 nose, both heavily modified with Toyota 2JZ inline-sixes under the hood, were part of a bracket style competition whose prize was a magazine feature. 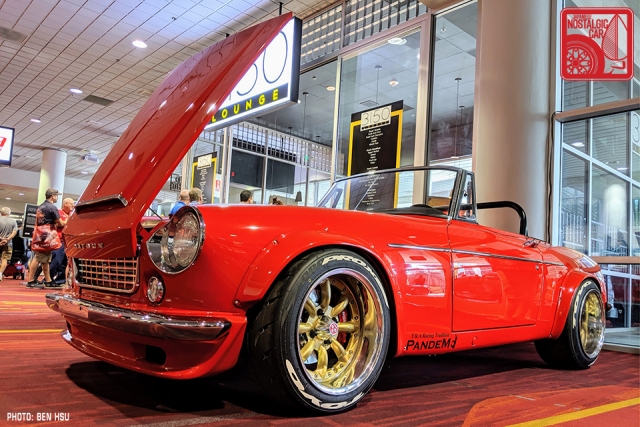 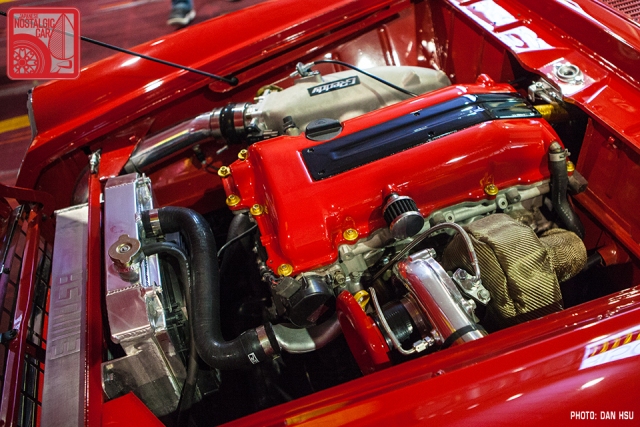 We found Mike Spagnola’s Fairlady Roadster lurking in the lobby area. It’s the first Datsun roadster we’ve seen in person wearing the Rocket Bunny Pandem body kit created by Kei Miura. Beneath the skin it was powered by an S15’s SR20DET and had a very nice Tilton pedal box as a tribute to the figures that made vintage Datsuns great. The 1966 1600 was purchased in late March as a sun-baked roller and has undergone an incredible transformation in just seven months.

A Pandem-kitted ND Miata at the Spec Clutches booth sported a 300-horsepower SkyActiv four. The car was finished in a white and blue livery inspired by Mazda’s 1980s race colors, specifically, the No. 62 FC3S RX-7 IMSA GTO racer. 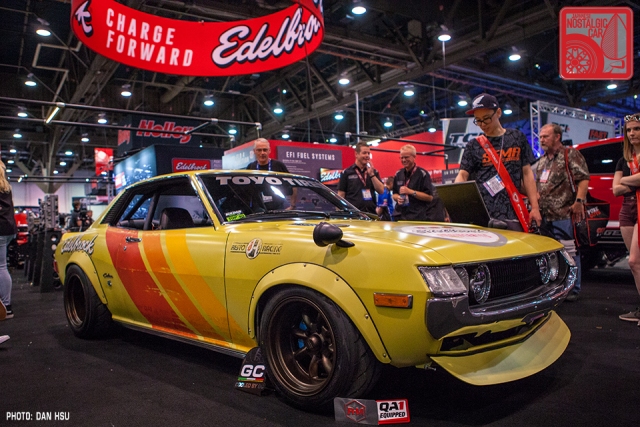 One of the biggest surprises was Kevin Huth’s 1973 Celica at the Edelbrock booth. As one of the most famed makers of hop-up parts for the first wave of American hot rodders in the 1930s, it was a pretty big deal for Edelbrock to feature a Japanese classic. 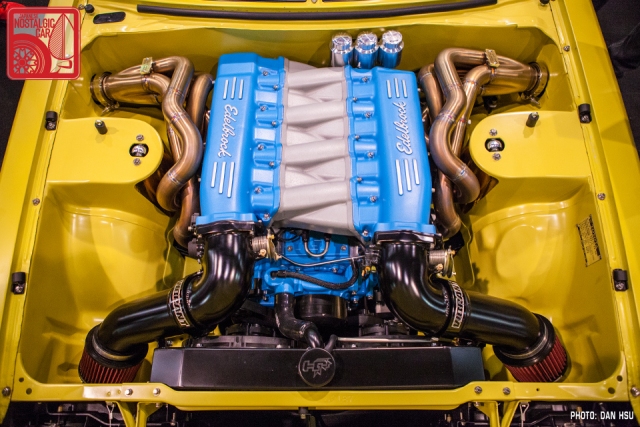 Let’s not dwell on the company’s largely unsuccessful bid to make “import” parts during the 90s tuning era. Here, the reason behind the Daruma’s presence is the Edelbrock generation IV aluminum LS under the hood. 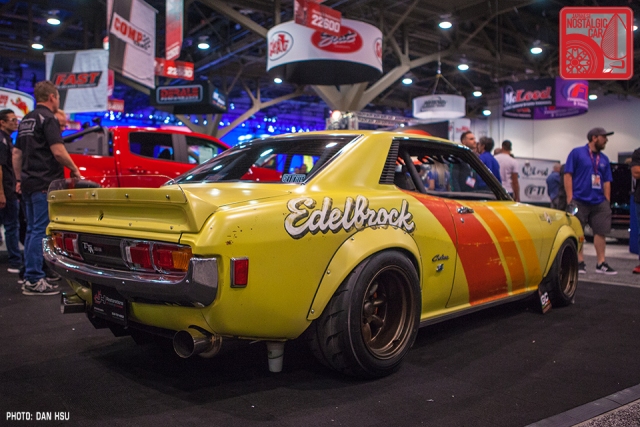 Beyond the V8, there plenty of custom work went into the car. Custom strut towers had to be created and hood bracing had to be removed to fit the 5.7-liter V8 in the engine bay. The exhaust headers route into the fenders, go down along the floorpan, to an X-pipe that exits on either side of the rear. An Exedy clutch and Nissan 370Z transmission connect the engine to a Ford rear end. 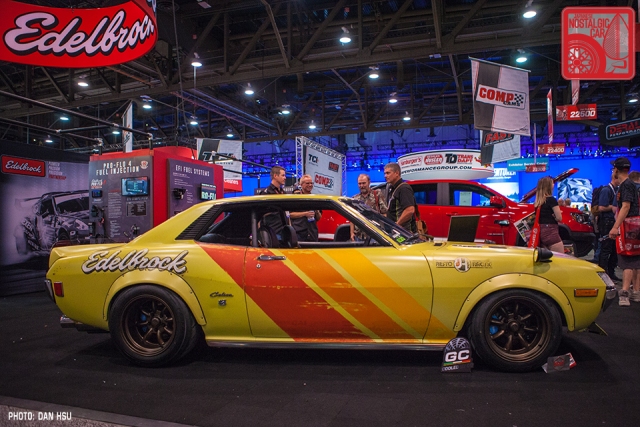 Toyo Proxes R888R tires wrap American Racing Silverstone wheels over Wilwood brake kits. According to Kevin, as many of the front suspension’s original mounting points were kept while allowing the front end to accommodate the custom coilovers.

The interior was reupholstered with VW Westfalia plaid. The car began life as a fairly complete and bone stock ’73 that was, alas, saddled with an automatic. Kevin tried to keep as much of the original patina as possible, with just a satin finish over it to protect the largely original paint. Anywhere rust repairs had to be done or custom metalwork fabbed, a tinted primer matched the original faded yellow perfectly. 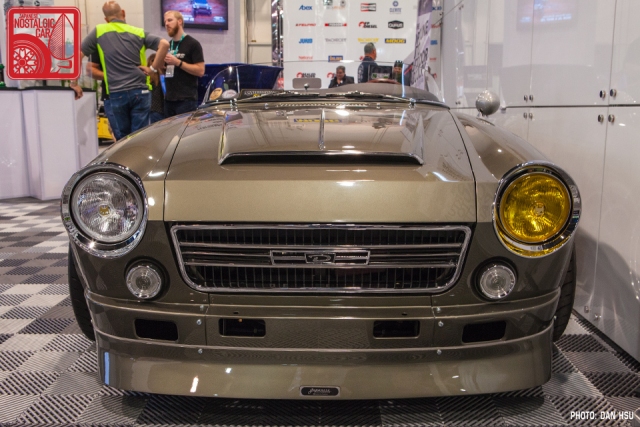 Chris Bishop’s Datsun Fairlady Roadster had at its heart a 197-horsepower Autech SR20DE. Once that engine was decided on, the rest of the theme fell into place: What if Autech had done a car back in the 60s? 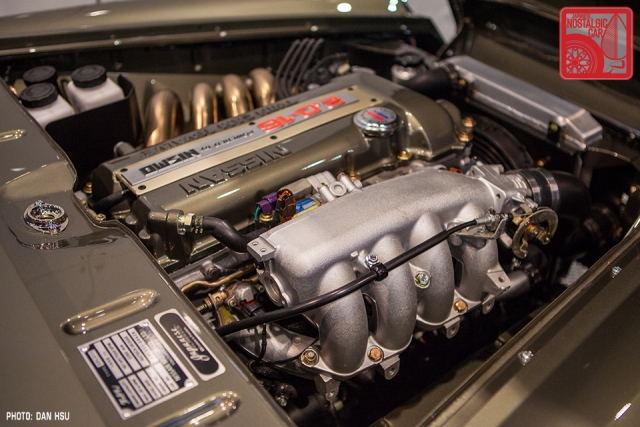 Nissan’s specialty car division didn’t exist until 1986, but if it did, Chris believed they would build a car similar to this. The highly customized Fairlady speedster features many clever details playing into the theme. For one, the green-gray color was inspired by the color of the 1988 R31 Skyline Autech Version. The oil cap is even a combination of the original R16 and the SR20’s as an homage to the original. 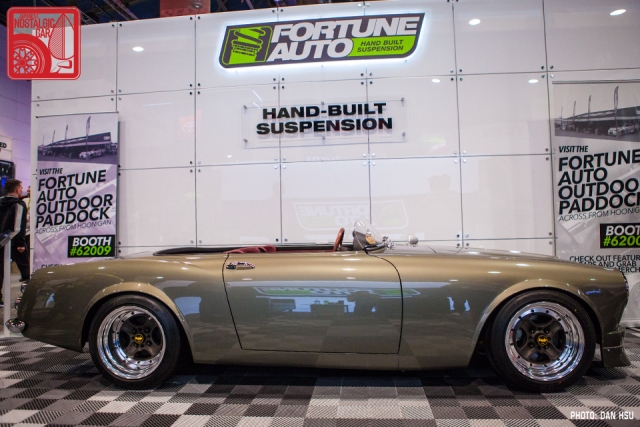 The body was completely redone, with rear fenders flared to match the stock fronts. everything but the door handles were smoothed out, and even the lines of the tailfins were accentuated with a slight nip and tuck. The body sits on a custom 4-link rear suspension and one-off Fortune Auto coilovers. 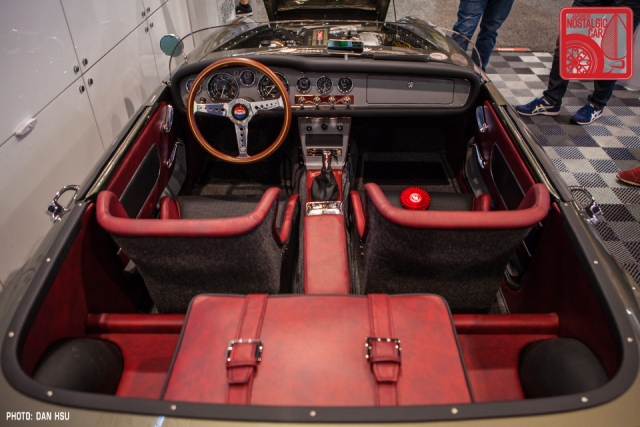 Inside, NISMO racing seats were cut and customized to provide red leather-upholstered buckets with matching luggage. The seats are mirrored, with bolsters are even shaped to make ingress and egress easier by flaring out towards the doors. 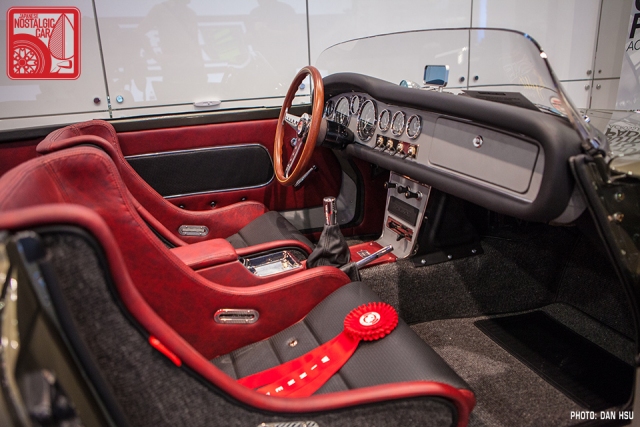 The gauges were rebuilt by a company that restore aicraft instrumentation. The originals were silkscreened and the electrics behind them modernized to work with an SR. When they tried to upgrade them with LEDs, Chris even insusted they continue to use the old incandescent bulbs for an old school look. Work Equip 40s complete the modern classic theme, and the car is a definite head-turner.

For his efforts, Chris received a Mothers Shine award, a tremendous honor for the Roadster considering the thousands of cars on display at SEMA. Impressively, it’s also a nominee for the Goodguys Gold Award. Each year, the old school hot rod organization selects five of their top cars at SEMA, a show that is still largely domestic-centric and rife with muscle car builds that cost more than a Lamborghini. Interestingly, until now the award specified that the car had to be American-made or American-powered. If this Datsun wins, it would be a first.

It’s impossible to cover the entirety of SEMA in one day. Tomorrow we brave the perils of the Las Vegas Convention Center for day two and more Japanese classics. To be continued…