SEMA 2019: Honda had the best booth of the show, and there was even a Chevy in it 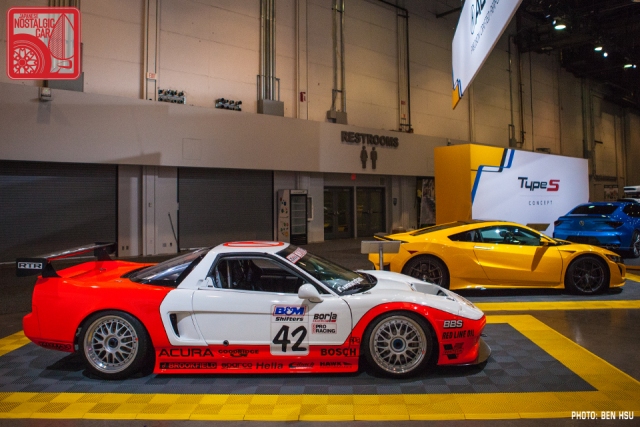 There used to be tons of Japanese manufacturers at SEMA. One by one, Mitsubishi, Subaru, Mazda, and Lexus have all pulled out. And in a year that marked the 50th anniversary of Nissan’s two most beloved models and the second coming of the Toyota Supra, it was little ol’ Honda that had the best display. Their booth was stacked with cool vehicles old and new, two-wheeled and four. 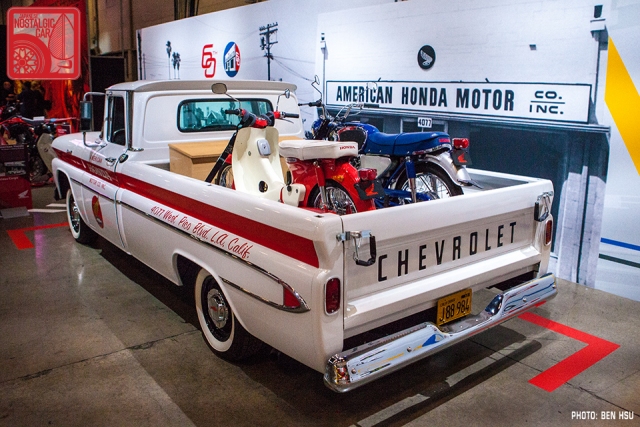 What was cool about the display was that it wasn’t just a bunch of cars shoved onto the floor (ahem, Toyota). The display told a story, of Honda’s humble beginnings to what the company makes today, and what it will make in the future. There were early bikes, classics, cars from Honda’s 90s heyday, and concepts for the future. Whether stock or customized or race-built, bikes or cars or trucks, it provided a visual evolution of the company as you walked through the exhibit. 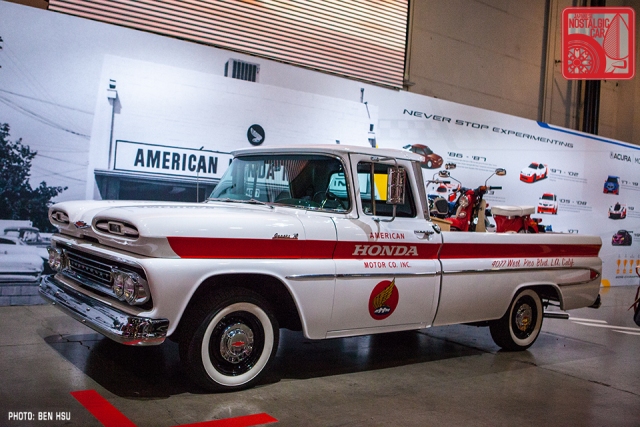 When Honda first came to the US in 1959, it didn’t build a pickup big enough to deliver its motorcycles on. So, it bought a Chevy. None of the originals exist, but Honda recently restored this 1961 Apache pickup to depict what one of its early delivery trucks would have looked like. 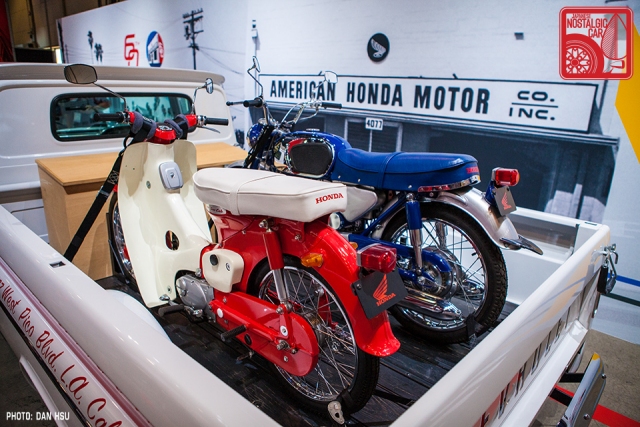 Honda wasn’t shy at all about putting a competitor’s product in their booth, and for the display  parked it in front of a mural of the original American Honda office on 4077 Pico Boulevard in Los Angeles. In the bed were two classic bikes, a restored Honda 50 Super Cub and CB160. It was a very cool and bold way to show the company’s origin story. 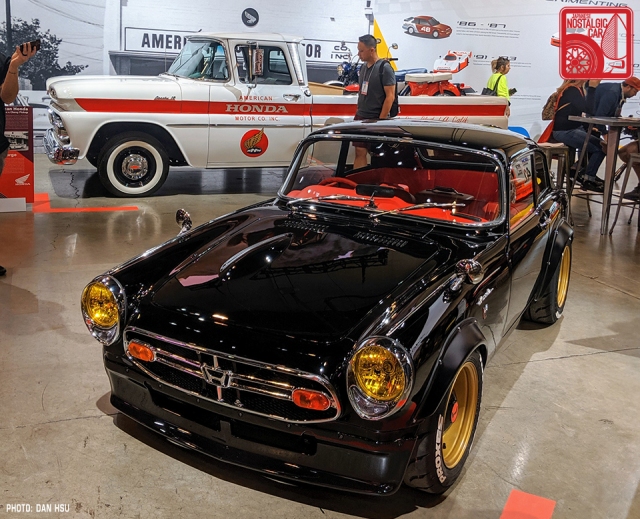 The star of the show was Daniel Wu’s Honda S800 Coupe, the Chinpira. It was such an unexpected and, frankly, badass build that it really upped the cool factor for the whole Honda display. As we photographed it, we caught bits and pieces of spectators’ conversations. Some called it mean, some called it cute, some were confused as to what it was (the S800 was never sold here), but everyone got a kick out of it.

However, it wasn’t even the only modified 1960s Honda present. We’ve seen this car at JCCS before, the Honda N600 with a Honda VFR800 Interceptor’s V4 engine built by Dean Williams. Here, the mad machine occupied a place of honor at the Honda display.

It keeps the motorcycle’s sequential transmission, now shifted by paddle, and feeds the power to the rear wheels. Of course, the original N600 was front-drive, but using a custom driveshaft, Ford 7.5 rear end, and Mazda Miata rear subframe narrowed 9.5 inches, it’s been converted to RWD. The original 600cc twin was rated at just 36 horsepower, but now it makes 115 in a chassis that weighs just 1,410 pounds.

Together with the S800, it showed that Honda was making interesting and exciting cars in the 1960s, cars that are still worthy of enthusiasts’ efforts and attention today. 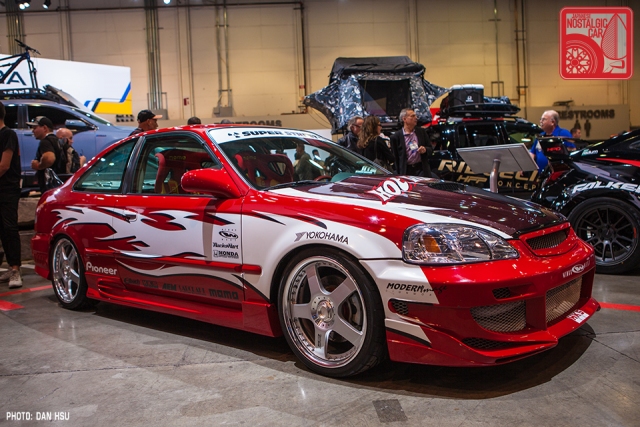 Moving on to the peak era of Honda customization was the Honda Civic Si tuned in collaboration with Super Street magazine, circa 1999. It had all the hallmarks of the sport compact era — a garish Wings West body kit and carbon fiber hood, Fast & Furious-style graphics from Modern Image, roll call stickers shouting out Racing Hart, Momo, AEM, Pioneer, HKS, Yokohama, Hot Wheels, and Honda itself.

On the racing side, the 90s also saw the success of RealTime Racing and the white-and-orange liveried Hondas and Acuras that dominated US touring cars. Peter Cunningham’s No. 42 Acura NSX was described as perhaps the winningest chassis in SCCA Pro Racing’s SPEED World Cup Challenge GT Championship. In the 50 races and six years that Cunningham campaigned it, it reached the podium 26 times and won 14 races, including the 1997 Driver’s Championship. 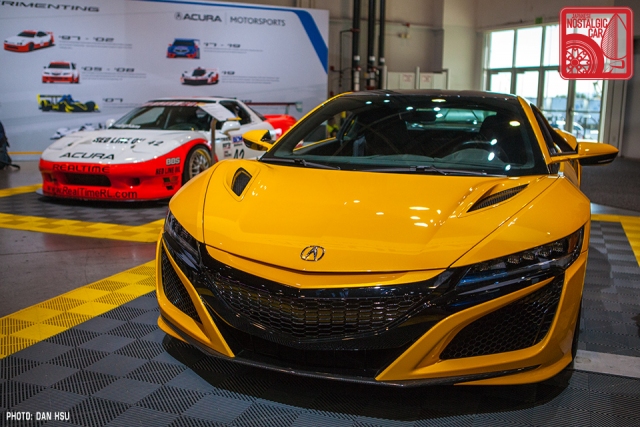 Showing Honda’s current activities were two other NSXes. The first was a 2020 Acura NSX, finished in Indy Yellow (known as Spa Yellow in the US). Honda calls this one of two heritage colors, based off the yellow of the same name offered between 1997-2003 (the other being Berlina Black). 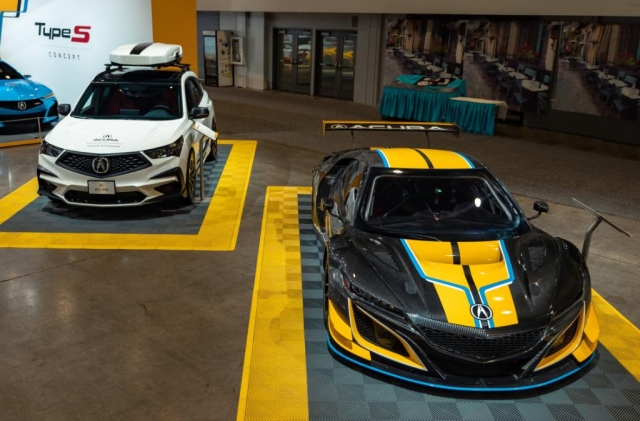 The second was the NSX GT3 Evo race car, a far bigger departure from stock than Cunningham’s NA1 was. The most obvious difference is that the body is carbon fiber, laid over  As per FIA rules, the three-motor hybrid system — and AWD along with it — has been ditched. Instead, the racer is RWD only, not to mention hundreds of pounds lighter than stock.

Another reimagined take on a classic Honda was a customized Super Cub 125. Built by Steady Garage, it takes the re-born Super Cub, now available in the US again, and turns it into a wicked little runabout called the City Slicker. The front suspension was swapped with that of a Honda Ruckus, allowing it to sit much lower than stock. Custom hubs were machined to accommodate 3-piece wheels, and the fenders were chopped to give it a more aggressive look. A deep emerald green frame and hazel seat give it a dignified retro look, but a Yoshimura Magnum GP exhaust lets you know there’s a party underneath. 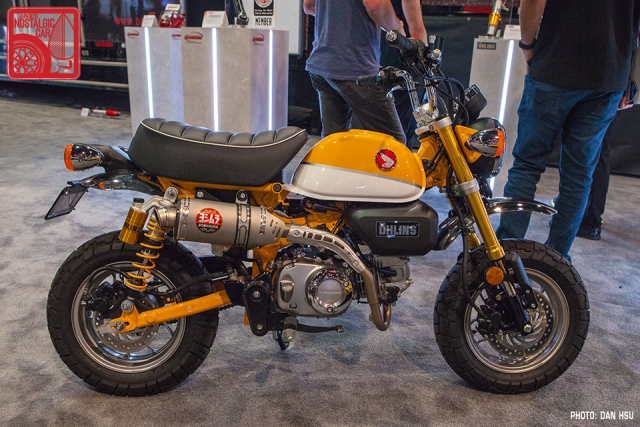 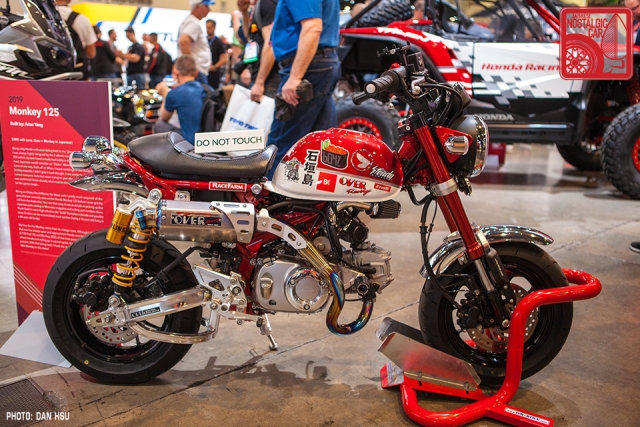 We absolutely love the Honda Monkey, and even though the original one was discontinued and reborn as a much larger 125, the bike still holds a special place in our hearts. That was the theme of the “Saru with Love” (saru means Monkey in Japanese) custom, built by Arthur Yang.

The bike looks to be inspired by a Japanese-style Monkey custom of old, but with obviously all-new aftermarket parts made for the 125. A titanium exhaust, aluminum swingarm and handlebar set by Over Racing of Japan, along with a Chimera intake and Kitaco  seat, give it an uber-cool classic and sporty style. Lastly, an Asia-spec light conversion cleans up the look.

There were plenty of current-gen Civics and crossovers as well, but the modern car that interested us the most was the Acura Type S concept, which is said to herald a new design direction for the marque. With rear-wheel proportions and a sleek new design, it will, according to Honda, mark a return to the Acura brand’s performance roots. What that means in terms of powertrains isn’t clear yet, but the company intends to bring back the Type S moniker to enhance some of its existing models.

In any case, it was an incredible display with lots to see. The sheer variety and thoughtfulness of the cars and bikes kept us there for a couple hours, which is no small feat at the extravaganza of machinery that is SEMA. Hats off to Honda, and hopefully this inspires other companies to follow suit.

4 Responses to SEMA 2019: Honda had the best booth of the show, and there was even a Chevy in it