SEMA 2017: Toyota will always have trucks 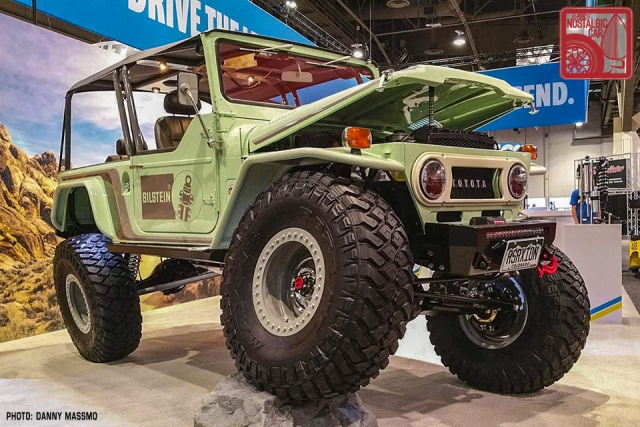 Nissan may have the “it” cars, says our editor at large Ricky Silverio, but Toyota will always have trucks. Toyota may have misstepped when it brought a fleet of Camrys to SEMA, eliciting even a roast from Honda, but when it comes to classic off-roaders, rock crawlers, overlanders, or just plain well-restored vintage SUVs, Aichi has the market cornered. 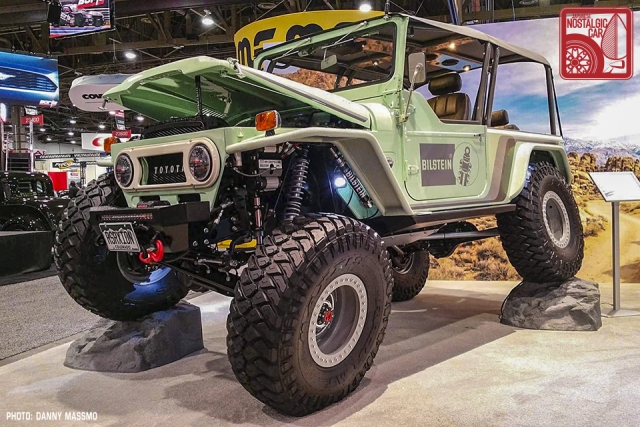 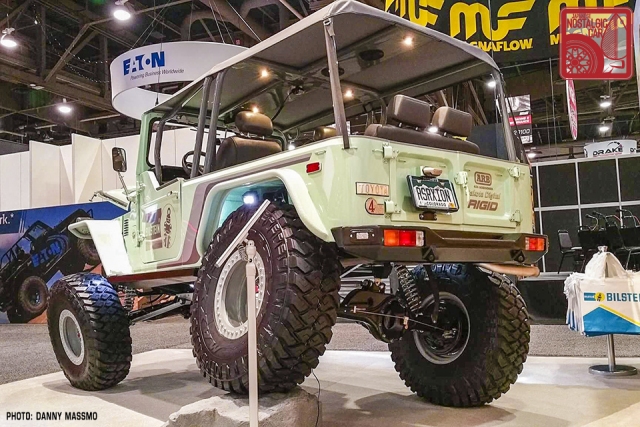 At the Bilstein booth was an incredible 1971 FJ40 built by Resurrection Land Cruisers. Because it needed length for rock crawling, it was stretched nearly 14 inches. The body sits atop a custom 3-link suspension in front and 4-link in the rear, with Bilstein coilovers all around for some impressive articulation. To accommodate 17-inch bead-lock wheels, the floorpan and wheel wells had to be custom fabricated,  but impressively the dash and much of the interior still looks stock.

The builders said they wanted to retain as much Toyota DNA as possible (be still our hearts!) and so they swapped in a fuel-injected 3FE, automatic transmission, and both front and rear axles from an FJ62. The body was painted in Toyota Spring Green from the 1970 FJ40 catalog. It’s chock full of neat touches, like how it retains the original FJ40 hubcaps.

After a strong debut last year, the Florida-based Land Cruiser restorers from FJ Company returned with more beautiful examples of their work. A blue FJ40 parked in front appeared to be the demo car with the 80-series inline-6 swap from the company’s video released earlier this year.

Icon 4×4 showed yet another resto-mod FJ40, part of what the company calls its Old School Series. It retains the look of a classic Land Cruiser, but runs a Cummins R2.8-liter turbodiesel four mated to a 5-speed transmission, a modified suspension, and Brembo brakes. It was situated at the Moore & Giles booth. The luxury leather goods company has just launched a line of automotive upholstery, as seen on the Icon’s interior and roof.

Though not an FJ40, Resurrection brought another Land Cruiser to the Cummins booth. Running the Cummins R2.8 turbo four, the rig looked like a not-sold-in-the-US 70-series pickup, but actually it was just the 70 body on a 1993 80-series chassis. The Cummins crate motor is good for 161 horsepower and 267 pound-feet of torque, and the 70 pickup simply looks bad ass. 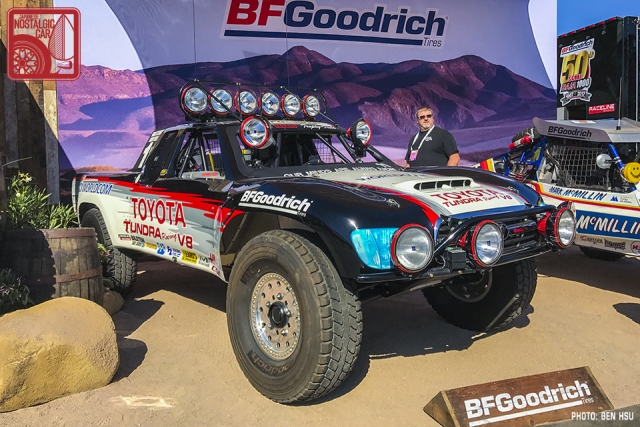 BF Goodrich didn’t have a Land Cruiser, but the Toyota truck it showed was the stuff of legend. Starting in 1998, this Toyota Tundra race truck won four Baja 500s. Its heavily modified 1UZ-FE V8 put out approximately 550 horsepower. We think the chassis shown was the actual number 015, the one which won the titles and has since been restored. Incidentally, for all you JNC Hot Wheels collectors, this is what the first release of the Toyota Baja Truck was based off of.

From one legendary off-road racer to another, we next found Rod Millen’s 1994 Toyota Celica on full display. Said to generate a brain-melting 850 horsepower from its turbocharged four, the car was the overall winner at the Pikes Peak International Hill Climb three times, and set a 10:04.060 record when the course was still majority gravel. The record would stand for 13 years and wasn’t broken until about three-fourths of the road had been paved. This, too, was a Hot Wheels.

Last year, Aaron Brown and Ed Goff drove their FJ40 4,000 miles through some of North America’s most grueling off-road terrain and straight into the Las Vegas Convention Center just in time for SEMA. This year, they repeated the feat but over 3,800 miles starting from Independence, Missouri and tracing the Oregon Trail. Then they turned south and passed through the Bonneville Salt Flats before arriving at SEMA.

The trip took 20 days and covered seven states. They had no chase cars or backup vehicles, carrying everything they needed to survive on the trusty FJ40. The duo says that even today most of the Oregon Trail consist of dirt trails and abandoned roads. Luckily, no one died of dysentery. 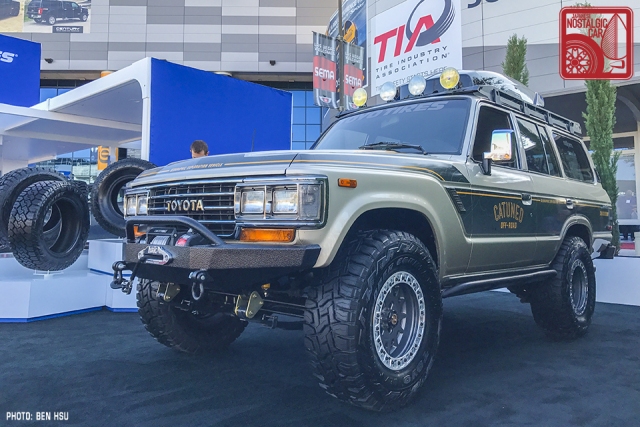 At the Toyo Tires display in front of the south hall was a nicely restored FJ62 with a custom safari rack and bumpers. It was a welcome relief from the chrome suspension’d brodozers that typically populate the area. 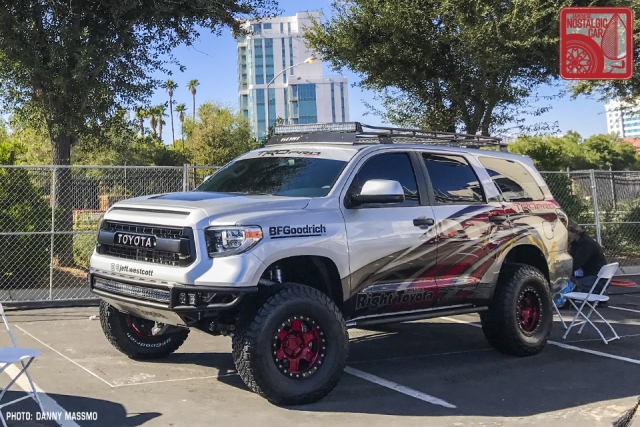 Toyota’s truck dominance extends to modern rigs as well. Tucked in a corner beneath the monorail tracks was a Sequoia that caught our eye due to its Tundra TRD Pro-swapped front end. The output is claimed to be 610 horsepower thanks to a Magnuson supercharger. 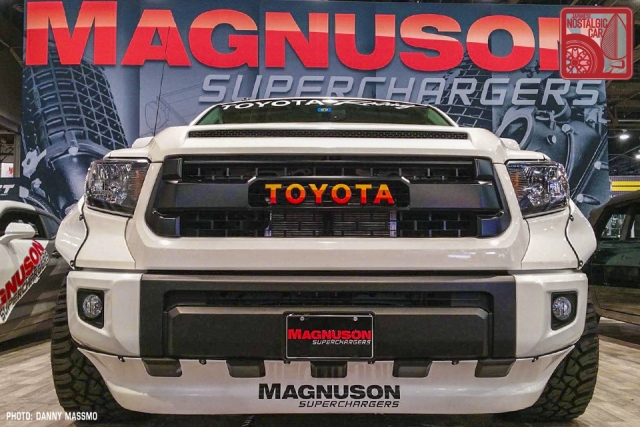 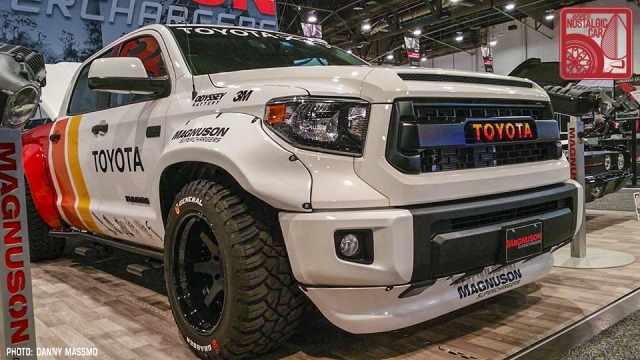 Speaking of Magnuson superchargers, the company’s booth displayed a widebody Tundra. We’re not certain, but it looks like Rutledge Wood’s gold one redone in white. We will never tire of the vintage Toyota red-orange-yellow racing livery. 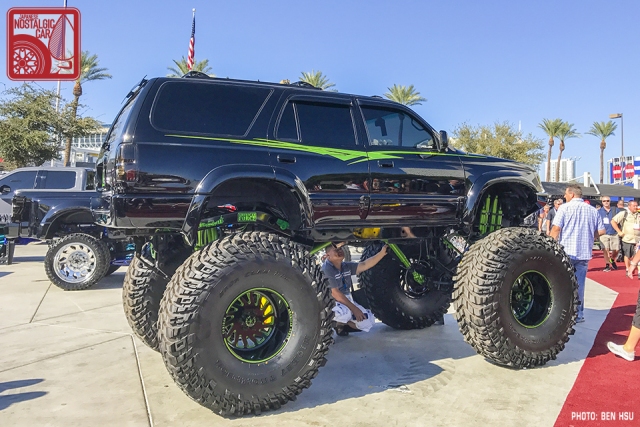 Last but not least, and because this is SEMA, we have to show at least one ultra-bonkers rig. May you enjoy your tribal-tatteed 4Runner as much as the guy squatting beneath it.

So there you have it. Rest assured that Toyota still has tons of cred, and in case armageddon arrives, it’s the Toyotaku who will inherit the earth.

2 Responses to SEMA 2017: Toyota will always have trucks