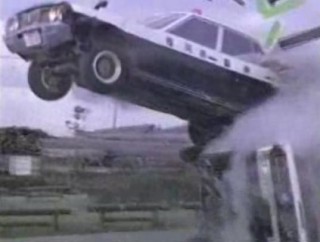 Before we were old enough to drive, two things fueled our childhood lust for the automobile: diecast cars and crime dramas. We’d patiently sit through 45 minutes of predictable plot lines and commercial breaks timed to instill maximum agony like some Kubrickian mind experiment — because time passes slower when you’re a kid — just to see a minute and a half of wheeled carnage.

But while we were hooning vicariously through The Dukes of Hazzard and Hawaii Five-O, Japanese youngsters were hyperacting to the cop show Seibu Keisatsu, loosely translated as “Western Police Division.” The series aired on Asahi TV from 1979 to 1984 and was sponsored by, among others, Nissan, Enkei Wheels and Autobacs.

We finally got a chance to watch the episodes that Hirst from Old Japanese Car recently posted in our forum, and boy were they funk-tastic! We couldn’t understand a word of it, but when Skylines, Cedrics and Z-cars are crashing into barricades, each other, and the ground after a balletic leap off a ramp, who cares? 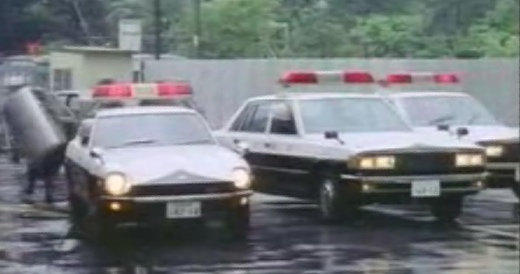 Remember how in the entire series of CHiPs, Ponch and John never once drew their guns, or how cameras in the A-Team always lingered long enough to show the baddies climbing out after a seemingly fatal wreck? Not so in Seibu Keisatsu. The Criminal Investigation Division of Tokyo’s Western wards deals plenty of death here, in both bullet and explosion form. The show has all the archetypes — the ice-cool leader, the gruff chief, the strong but kind-hearted giant, the motorcycle-riding rebel — all of whom smoke a cigarette in every other scene, wear tight pants that flare at the ankle, and sport sideburns the size of a yardstick. You really can’t get much cooler than that.  Best of all, interspersed amongst all the perp-chasing, there are city scenes of Tokyo from when the cars we love were still new.

In later years, the series went all Knight Rider, with special machines based on cars Nissan was promoting, like the R30 Skyline, equipped with stuff not found on the option list (um, what’s the trim level with the afterburners and hood cannon?). Today, Seibu Keisatsu still enjoys a legion of fans, who are not adverse to building replicas of the cars in the telly. It also helped sell a Nissan or two.

permalink.
This post is filed under: datsun, nissan, Video Games.