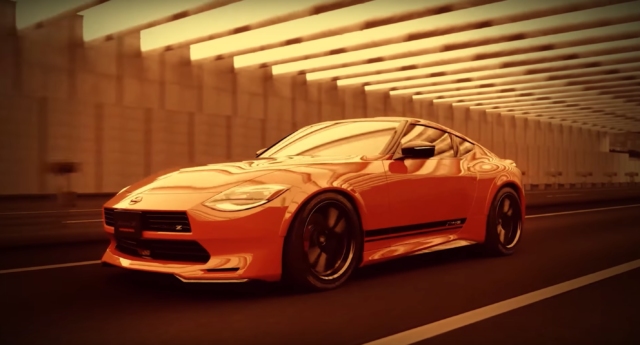 Cars always look different in motion than they do standing still. Nissan has released a video of the Z432-inspired Customized Proto with its new and improved nose, and it’s worth a look. Well, technically it’s more of a computer render, but it still gives you some more (and dynamic) angles than the one we saw on the Tokyo Auto Salon stage. This is what it would look like on the road.

The more we see it the more we like it. It looks great in motion, especially with the light dancing off of it from different angles. We can only imagine that it looks even better outside of the entirely tangerine-tinted world that it lives in. The throwback nose just looks so natural, so right.

If we had one nit to pick, it would be that the black stripes on the side end at the door cut line. Either extend it all the way to the rear tire or end it before the cut line (at the same angle as the line). Otherwise it looks like an oversight. Anyway, that’s one very small complaint. Overall, it’s a great looking car, and we hope Nissan is truly looking for a way to make this nose happen, as they say they’re doing.

Orange you glad Nissan is listening to the fans?