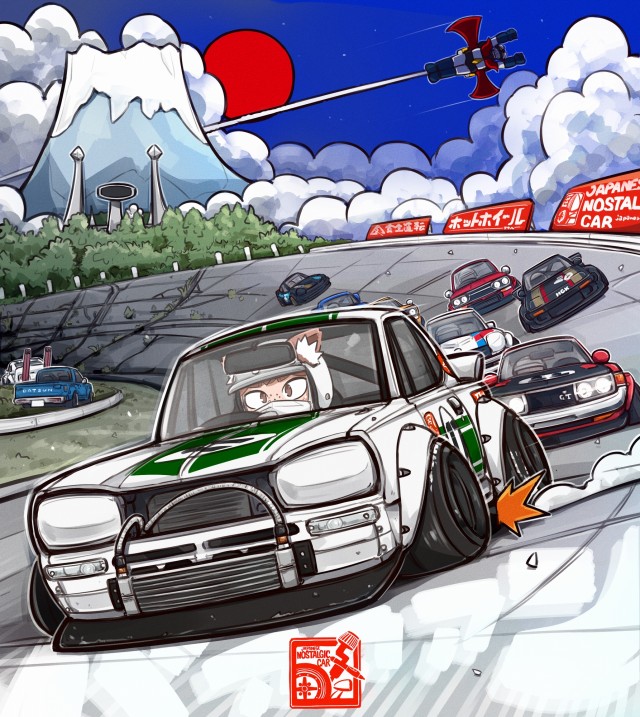 We are proud to welcome Japan-based artist San Mamiya as a regular contributor to JNC. After we featured his brilliant artwork in March, some of the JNC staff commissioned him to draw their own cars. That project snowballed into a deeper collaboration, and we hope readers will enjoy the first San Mamiya X JNC illustrations.

As fans know, one of San Mamiya’s many talents is that he doesn’t just draw the cars. He understands their every facet and possesses a vast knowledge of various tuning styles. Each drawing is peppered with clever details and easter eggs that reveal themselves upon multiple viewings, perfect for the otaku and enthusiast alike.

For this first drawing, I wanted to imagine race cars duking it out on the old banking of Fuji Speedway, emulating the touring car races of the 1970s, while wearing livery like the JNC inkan‘ed Hot Wheels. Mt. Fuji, of course, would be looming in the background. Then, as an ode to another Showa Era icon, I wanted to add a little favorite of mine, Go Nagai’s Mazinger Z, whose base was by Fuji-san and whose battles mostly took place in the surrounding area.

Naturally, as the first Hot Wheels to bear the JNC inkan, the Hakosuka Skyline would be in the lead (not unlike period photos of the real works KPGC10s). The TA22 Celica was next simply because I love them, and the rest were based on their color schemes. You’ll find all the regular issue JNC Hot Wheels race cars — the white 240Z, black RX-7, red 510 wagon, yellow 510 wagon, blue RX-7 and black 240Z — in a tight field. San Mamiya’s expert placement of each car gives the sense of speed and really captured the look of the era. The inkan’ed blue 620 pickup sits in the infield as a support vehicle, and just for added coolness, there’s a Mad Manga in the mix, too.

In case you’re wondering the three billboards say San Mamiya, Hot Wheels in katakana, and Japanese Nostalgic Car. However, because the RX-7 was a bit too new for the original banking, San Mamiya suggested a surreal scenario in which the cars are running on the now unused and neglected section. For his part, San Mamiya was particularly excited about the vivid color of the sky, sun and clouds, a reference to the blues and reds used in Japanese art.

Lastly, in honor of our first collaboration, there’s the JNC inkan but modified slightly to include San Mamiya’s weapons of choice. 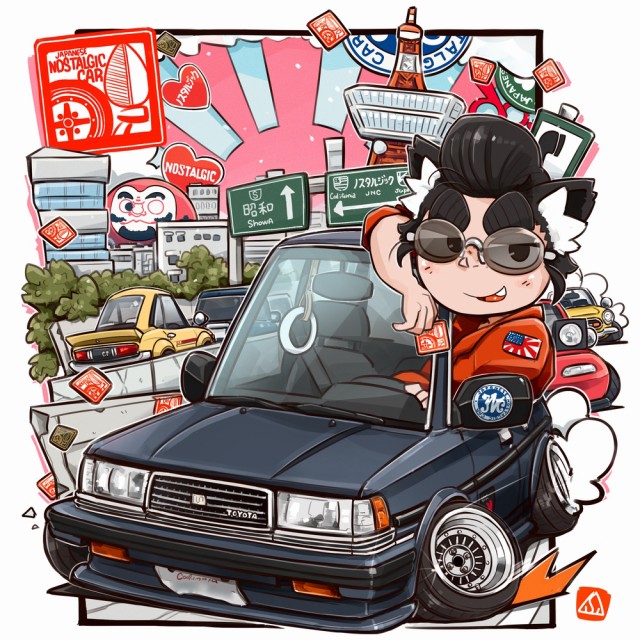 Another one of San Mamiya’s talents is his ability to create imaginative masterpieces based on only the flimsiest of guidelines. For example, Ben wanted a drawing of the ol’ JNC wagon, a 1986 Toyota Cressida. He sent only a photo of the car and mentioned that he wanted it on a Tokyo expressway.

Everything else spawned from San Mamiya’s rich imagination — the flying inkans in both original and black and gold, the Racing Mate and Okamoto Condom tributes peeking out from the clouds, the rising sun, nostalgic hearts, Tokyo Tower, looming 25 Year Club daruma, and myriad of old Japanese cars populating the expressway. Ben nearly fainted when he saw the final product. 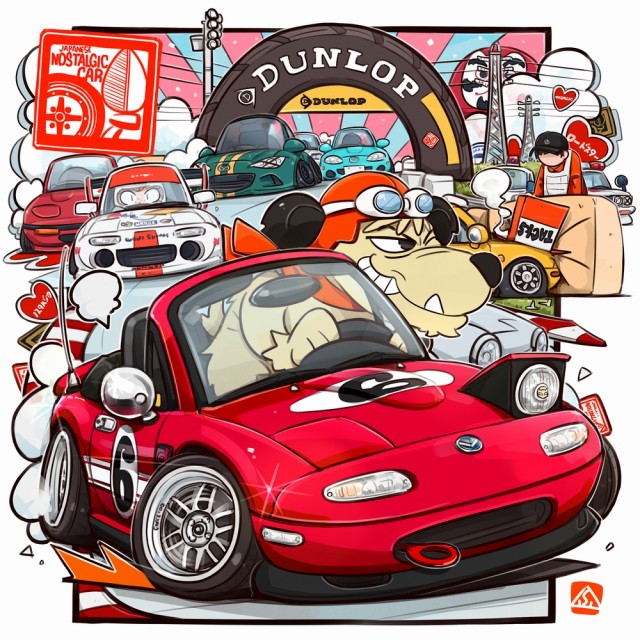 For my own car, I gave him only a few parameters: my 1993 Miata racing on a circuit in Japan, Muttley of Hanna Barbera’s Wacky Races fame (incidentally, created by Iwao Takamoto) as the driver, some way to accentuate my SEV Marchal headlights, and my racing number on a roundel. I provided only two photos.

From there, San Mamiya read my mind. Tsukuba Circuit by the Dunlop bridge? That was exactly what I was thinking. The number 6 in a 1960s font? That matched exactly the style of my car. He even researched the mischievous persona of Muttley so he could depict him glancing impishly at the yellow Roadster he just sent off the course with a box of tacks.

Originally my limited imagination had Muttley racing only other NAs, but San Mamiya did one better by incorporating historic and iconic Eunos Roadsters. Let’s see if we can name them all: Beside my NA there’s a silver Pit Crew NA, followed by the Nopro JGTC rotary Roadster, the IAD V705 Miata prototype, a retro-modded ND, an NB in Crystal Blue Metallic, and since it’s a Rotary & Roadster meeting there’s an FD3S RX-7 in arrears.

Keeping with the all-Mazda theme, the safety car is Savanna RX-3 and the ambulance is a Mazda Bongo. Even the telephone lines that surround Tsukuba are captured before JNC decal-inspired sky, all brilliantly laid out and depicted by a master artist.

A very big domo arigato gozaimasu to San Mamiya, and please stay tuned for more of his work to be featured exclusively on JNC. Today also happens to be his birthday, so a big Omedetou to San Mamiya and follow him on Instagram!

We’re planning to print a limited run of the Fuji Speedway drawing as actual posters. How many JNC readers would be interested in purchasing one? Let us know in the comments.