Can you name a rear-engined Japanese sports GT with Italian styling and specific output of over 100PS/L? Such a car was real, and it came from Suzuki.

Suzuki is a marque with rather divergent reputations in the US versus Japan. Ask an average American their perception of a Suzuki car, you’d likely get a blank or even negative response (motorcycles are a different story). In Japan, Suzuki is a prolific automaker, purveyor of clever and high-quality vehicles like the Swift, Wagon R, and Jimny. All of these are marked by compact or diminutive size, making Suzuki an expert at producing mini cars. Fittingly, Suzuki is one of the originators of the kei sports car, its storied Cappuccino and Cara/AZ-1 among the most distinctive examples ever made. The subject of this post is an ancestor to these sportsters: the Fronte Coupe. 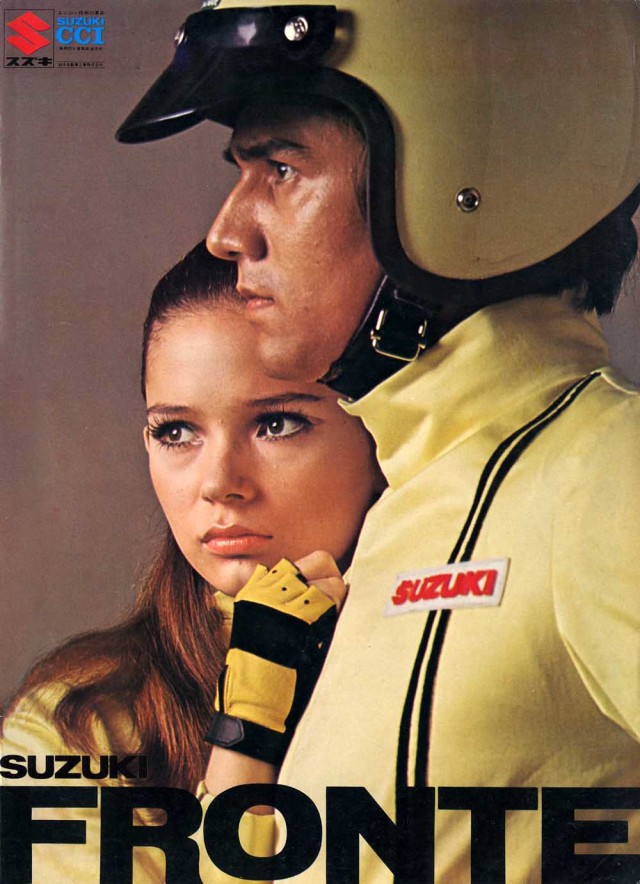 In case you are not familiar with kei jidosha, it literally translates to “light automobile.” In a nutshell, it’s a class of small cars that would probably be classified as sub-(sub-?)-subcompact here, with rules governing its dimensions and engine size. This is largely for tax and insurance purposes, which in turn relate to the tightness of space in urban Japan. Since 1990, engine capacity of kei cars has been capped at 660cc (~40 cubic inches), and even power output and load capacity are restricted as well. Lest you dismiss them as bores, not only are kei cars perfectly normal for Japanese drivers, but marketing forces have driven them to evolve their own bits of charm, personality, and innovation.

Some of the earliest successful cars in Japan were kei cars, with the market and development led by Suzuki from the beginning. Most notably, Suzuki pioneered front-wheel-drive. The original 1962 Fronte was so named as a reminder of its FF (front-engine front-wheel-drive) layout as well as Suzuki’s position at the front of the pack among kei makers. 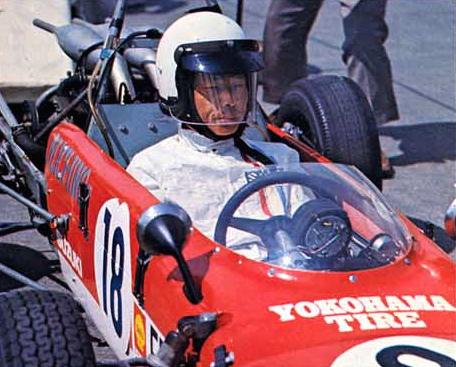 Ironically, when the second-generation Fronte debuted in 1967, it switched to RR (rear-engine rear-wheel-drive) layout. Frontes of this generation was perhaps most iconic for its association with Stirling Moss: he rallied a high-performance SS model on 466 miles of Italian highway and sustained an average speed of over 76 mph! The third- generation Fronte arrived in 1970. Up to this point, Frontes were powered by the LC10 air-cooled two-stroke three-cylinder engine in various tunes. The LC10 also powered the single-seat Nialco RQ race car, which was once driven by Kikuo Kaira of the future Tommy Kaira.

In 1971, Suzuki introduced the water-cooled LC10W. Later that year, they unveiled the iconic Fronte Coupe powered exclusively by this engine. The Coupe’s original design came from Giorgetto Giugiaro, and it descended from his earlier work at Ghia on the one-box Rowan Electric Car. Distinctively wedge-shaped, similarities can be found when you stare at the Fronte Coupe, the Rowan, and the original Lotus Esprit, one of Giugiaro’s most famous work. 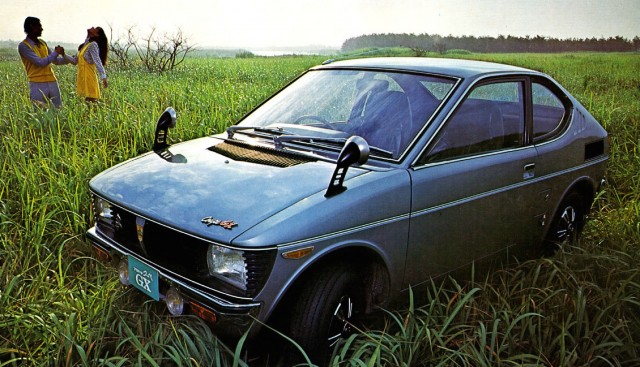 Suzuki drastically toned down the design for production, but the two-box Coupe still looked rather rakish and GT-like, at least for a kei car, with (relatively) long hood, short deck proportions. The set-back cabin with the wheels pushed out to the corners gave the car an eager, playful look. The sporting theme was backed up by the LC10W powertrain and the Coupe’s exclusively two-seat configuration. This, then, was one of the first, if not the first, enthusiast-focused kei car. 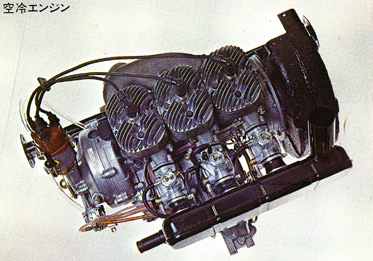 Per government regulations at the time, the LC10W displaced 356cc. With peak power at 37PS, it had a specific output of 103.9PS/L. Mind you, the Fronte Coupe was roughly the size of the original Mini and weighed just over 1000lbs. The prodigious engine power was routed through a four-speed manual transmission to the rear wheels, enabling the Fronte Coupe to sprint to 60mph from standstill in 23 seconds, on to a top speed of 78mph.

Handling was appropriately sporting. Independent suspension was found at all corners, with MacPherson struts up front and semi- trailing arms in the back. 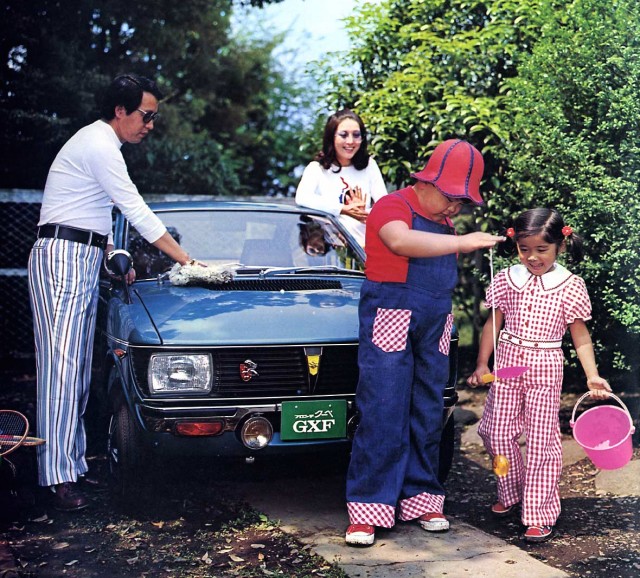 The steering, of course, lacked assistance, and as such was direct and communicative. Despite the RR layout, weight distribution was at a rather optimal 48:52. For those who relish driving a slow car fast, the Fronte Coupe provided loads of entertainment. As a sensible and economical kei car, it brought such driving fun to the masses.

Well, a two-seater was not quite the most sensible. Suzuki thus added a 2+2 version in 1972, ostensibly fit for families, designated with an “F” at the end of the trim level (for four seats). In reality, of course, the back quarters were tight and suitable only for parcel, small children, or occasional use. Nevertheless, the 2+2 models quickly dominated sales, and the two-seater version disappeared by 1973. Another notable upgrade was front disc brakes, which became available in 1972. 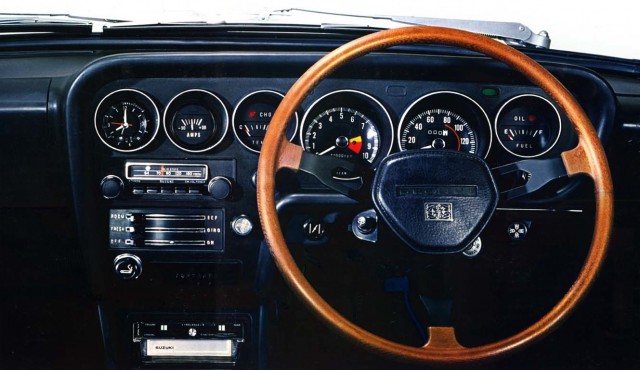 The Coupe was otherwise a well-equipped micro-GT. The driver faced a full complement of gauges in six round binnacles, almost reminiscent of that of a certain rear-engined German sports car. An 8-track player could also be had to bust some 70s tunes. And how about some brown vinyl seats with embossed logos? The driver gripped a wood-trimmed steering wheel and shift knob. The steering wheel even had tilt. A variety of racy accessories were also prominently available as dealer options: a small-diameter steering wheel, JAF-spec roll cage, racing bucket seat, aero parts, and — this being the ‘70s — louvers over the back glass. This thing had all the qualities of a desirable toy. How did one resist the temptation to deck one out, redline it all over a touge, while not breaking the law or bank?

As mentioned, the Fronte Coupe was unique in its sporting character for a kei car. Prior to it, kei cars had been outfitted for sports and even racing driving. Aside from Suzuki’s own Fronte SS and SSS, both Mazda R360 and Carol raced in the Japan Grand Prix (in the appropriate classes, of course). The Fronte Coupe, however, was the first production kei car designed from the outset as a sports GT. It thus foreshadowed future goodness such as the Cappuccino, Honda Beat, Autozam AZ-1, and Daihatsu Copen.

But don’t get too excited. The kei car segment is, after all, intrinsically driven by frugality and practically. As sports cars are in many ways antithetical to this, the cleverness and charisma of kei cars would find commercial success elsewhere, in MPVs, off-roaders, a!nd crossovers.

As a niche product, however, the Fronte Coupe did last a good while. The original generation was produced until 1976, by which time it became obsolete under the revised kei jidosha regulations. Its replacement arrived in 1977 as the Cervo, essentially a slightly enlarged Fronte Coupe with a 540cc engine.

Unfortunately, its spiritual successors would not attain similar levels of commercial success. Today, the Fronte Coupe is rather well-remembered. For instance, it routinely shows up in Nostalgic Hero magazine’s lists of top classic Japanese cars. Along with Mazda Carol, it can also be seen in vintage racing in Japan. None of this is surprising; it’s a unique and very charming car. So, who wants to be the first to import one?

permalink.
This post is filed under: Back Roads and
tagged: fronte coupe, kei, suzuki.