As of yesterday, Toyota became the only Japanese carmaker to win the 24 Hours of Le Mans twice, but when it came time to escort the colossal trophy around Circuit de la Sarthe, they had to go with a 1987 Toyota Celica. Now the T160 Celica is a fine car, but it highlights the rarity of the open-top cruiser among JNCs. A Miata or S2000 is a different animal, built for canyon carving rather than relaxed wafting on a cool summer night. Compared to Detroit, they are so uncommon that we’ll have to include roadsters, targas, and T-tops just to get a diversity of answers.

The most entertaining comment by next Monday will receive a prize. Scroll down to see the winner of last week’s QotW, “What is the Best Japanese Automotive Trilogy?” 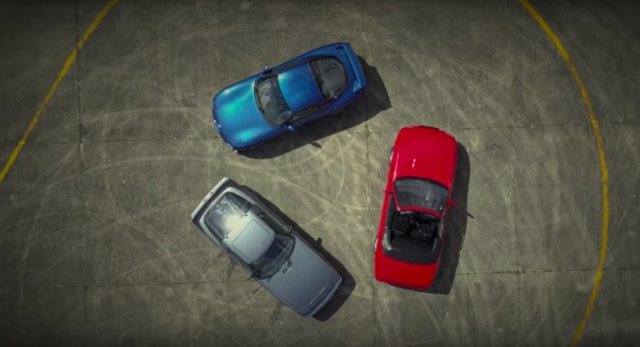 There were quite a few well-reasoned arguments put forth for last week’s question. Lupus, for example, offered a car that spanned a 50-year continuous existence with only three generations, the Toyota Century. Banpei nominated an obvious but no less compelling the R32-R34 Skyline GT-R. Alvin didn’t go with three consecutive generations, but is completely right about the Honda NSX, Prelude and S2000. Styles argued for many fascinating trios from front-drive Corollas to Mazda Familias, but like the winner Dave, in the end it came down to the Mazda RX-7. Here’s his dissertation-level thesis on why:

If we were to take some cues from the movie industry, the “best trilogy” should be 1. the most consistently mold-breaking/way-paving and 2. self-contained, at the least at the time of said critique.

The second criteria, although arguably not as important as the first, is crucial to determine the concept of “best trilogy” because it implies the COMPLETION of a story and a COMMITMENT to see it through to multiple, successive parts. As countless movies has shown, once that idea continues to the fourth installment or beyond, the WEIGHTINESS of the original “trilogy” lessens; the “ground-breaking” idea becomes “retreaded ground” and doubt creeps in on whether it’s a good idea to continue.

But a COMPLETED trilogy allows us to look back and evaluate its broader meaning during its own time and what it may continue to mean for future audiences. That consideration is crucial to deeming whether it is the “best”, I believe.

The Toyota Century may satisfy the first criteria, with Toyota’s focus on a very particular demographic (yet arguably more varied than that of its more standard offerings). But it’s also more of a “curated” undertaking, breaking preconceptions of how stately a Toyota can be without breaking much technological nor philosophical boundaries. Additionally, the third generation was only recently released, and so I would not consider its trilogy complete (nor would I want it to be).

The three generations of the Mazda RX-7 fulfill both criteria: a singular commitment to a unique technology (rotary), culminating in a full spectrum of expressions (from NA to twin-turbo, from Porsche-mimicking wedge-shape to oh-so-sensual lines), while maintaining a core aesthetic (pop-ups, massive B-pillar, wraparound rear glass)—through two decades of very quickly changing economies and consumer tastes, no less.

Flaws aside, the RX-7 was the true BUILDING of a company’s brand values and DNA in REAL TIME (not added to the company’s lore by later generations). Without fear, and seemingly without any hesitance, every RX-7 generation walked the fine line of “what we know” and “we don’t really know if this will work”. The trilogy wouldn’t have worked for any other company, large or small; it’s complete; and we can rightly judge its impact on the car community in totality while also hoping—with a bit (ok, a lot) of trepidation—for a future revival.

And that’s why the RX-7 continues to be the best Japanese automotive trilogy to date.

25 Responses to QotW: What’s the best JNC for open-top cruising?