While we’re all continuing to shelter from home, it’s a great time to catch up on movies. Going back to watch some of the classics, it can be amazing to see some of the JNCs populating the backgrounds. Take the above scene in the original Back to the Future, for example. The idyllic town of Hill Valley circa 1985 is absolutely packed with mint condition JNCs — B210, Civic, Tercel, Celica, B110, 240Z, Toyota Van, and so on — and that’s not even counting the Toyota pickup that is featured front and center as Marty’s dream car. Forget 1955, we’d love a time machine to take us there.

The most entertaining comment by next Monday will receive a prize. Scroll down to see the winner of last week’s QotW, “Daily, Garage, Sell — Flagship Sedans Edition.” 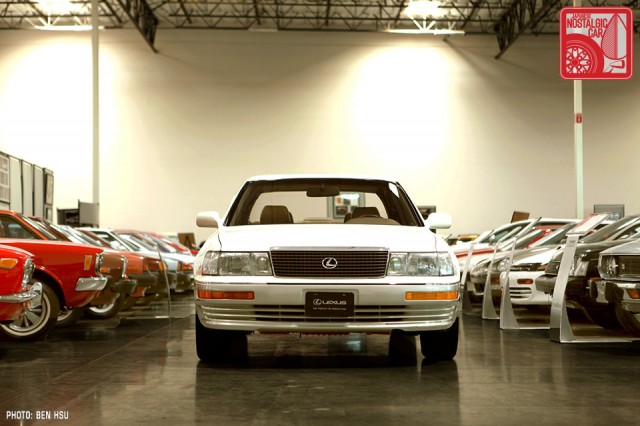 We don’t think we’ve ever had a Daily, Garage, Sell commenter who actually owned all three of the cars in question. And if we had to guess, the with three late-1990s Japanese luxury sedans would have seemed like the least likely category for that. However, reader kcbobo surprised us with a collection of game-changing flagship four-doors:

Heyyy, wait a minute…how did you guys get into my garage? This is just weird. Talk about doing a double take: I own all three of these vehicles! (For real. And if I knew how, I’d send along photos to prove it.) Yep, all three, and while Daily and Garage are pretty easy, Sell is just cruel.

Daily is my ’91 Toyota Celsior, identical to the car above branded Lexus LS400 around these parts. It’s the same white-over-gray pictured above, and with about 110k kilometers (get your smartphone out), it’s as pleasant a daily driver as you could ever hope for. It’s JDM with right-hand drive, which throws some people off but works for ambidextrous weirdos like yrs. truly. It’ll happily go to the grocery one day, then halfway across the country the next. Reliable, smooth, ergonomically flawless and as comfortable as a BarcaLounger – Toyota/Lexus executed the design and build just right on this one. Air suspension, power seat belt height adjustment, mirror blowers…apparently nothing was considered superfluous as they came to capture the hearts and wallets of Benz and Bimmer lovers here. Every aspect of this superb sedan, from the virtually NVH-free 1-UZ V8 engine to the hush-quiet cabin with sublime audio system, reflects the best Japan has ever offered, even 30 years on.

Garage (because of rarity) is my ’89 Acura Legend sedan with 17k miles. More time machine than automobile at this point, it very quietly goes about its business, doing pretty much everything right. It feels like what it is, Honda’s big move at the time into “luxury” with leather, power everything, a very refined V6 and odd little touches like a high-mounted pushbutton to skip to the next radio station and two master cylinders, one dedicated solely to the then-new ABS system. It runs and handles effortlessly, with a well-tuned suspension, solid handling and a confident manner that belies its somewhat diminutive size. It feels and drives bigger than it is, and with so few miles, it’s still showroom new in and out. Sell it? Why? Drive it daily? Couldn’t handle the guilt. They don’t call it Legend for nothin’ friends: Honda built this fun and dynamic Acura to last, and every drive in it reminds me that it will.

Sell (only because you’re making me!) would be my ’91 Nissan President, another JDM right-hand driver known here in the US as the Infiniti Q45. It looks like a Q45 on steroids, stretched so the body is longer than its Q45 twin. 36k miles and all the finest early ’90s appointments a diplomat or CEO could want, from power curtains and a TV to heated and reclining rear seats. And hey, it’s got the best looking hood ornament of any car I’ve owned. The Infiniti V8 is a workhorse, just doing its thing without a lotta drama. On the street, this car gets more stares than Marilyn Manson at bible camp, though there is always the small matter of that Active Suspension. And if you want to master the A/C and stereo controls, your Japanese skills will come in handy. As for driving dynamics, it handles like the love child of a Mercedes S600 that mated with a DC-3. As my mechanic says, this isn’t just a car, it’s a work of art. (So yeah, sure, I’m saying I’d sell, we’ll go with that. But in reality, um, let’s just say it wouldn’t be my first lie.)