QotW: Tell us your most challenging “reach”

Posted on November 6, 2017 by Brandon Kelley 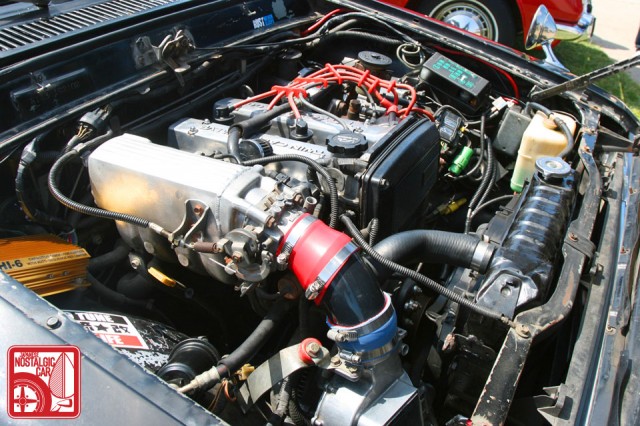 SEMA has some magical vehicles on display. Even more magical are the clean, eat-off-the-floorpan quality restorations. I’d say most of us are not privy to that level of pristine. For most of us, we spend countless nights wrenching to get a JNC back up on its feet. But, sometimes, we have that one bolt, that one clip that is so easy to see, but impossible to reach. I want to know about your experience:

Tell us your story of a difficult reach while trying to repair or diagnose your JNC.

My own tale involves the same engine pictured above (but not my ride). It was my first engine swap. I just got the head back from the machine shop, put it back on and torqued all the head studs, just installed the headers and intake and finally the valve covers. But I had an extra water jacket in the corner of the shed. Oops. I spent three hours trying to tighten two 10 mm bolts on the back of the head. The gap between the head and the firewall was about half as thick as my flat hand. I had to make the “scissor” motion with my fingers while holding a wrench and only getting 1/32 of a turn at a time. To add more stress to the mix was a plastic vacuum sensor with 2 brittle nipples on the end. As I got one bolt secure enough to hopefully not leak, one of those vac nipples snapped when it got clocked by my thumb… Words were exchanged between me and that water jacket. Many words. On my fourth rebuild, I still have that same head minus all the vac lines and that water passage where the jacket would have bolted up to is now welded shut.

The most entertaining comment by next Monday will receive a prize. Scroll down to see the winner of last week’s QotW, “JNC Battle! NSX vs Supra”

Last week we had our first battle. We kicked off with two titans: The Toyota Supra and Honda NSX. Many of you weighed in with experiences, impressions, childhood poster aspirations and racing heritage. In the end, there can only be one winner (of this round at least) and the clear winner is the Honda NSX. Overwhelmingly, the group sang on about how revolutionary the NSX was at the time and why it deserves the win.

I think BW deserves the nod for the excellent post…well several, and Lego inspiration link!

…It’s what a true driver’s car is supposed to be. Connected. Like an extension of yourself. Your mind says to turn and almost instantly, the car turns. As if your hand movements are actually a part of the steering wheel and directly linked to the control arms and steering assembly and all turning simultaneously. Not to mention the throttle response isn’t perfect, it’s better than perfect. It’s as if the throttle is reacting to your inputs before you make the input. And the reliability and cost of maintenance and ownership is insanely inexpensive. In some cases you can pay for 10 years of maintenance on an NSX with just one or two years of maintenance on a similar era Ferrari or Lamborghini. And then there’s the packaging. Everything is put in place with a purpose. Almost like on a Navy ship. Everything has a purpose and is in its place using the least amount of space. Well, the NSX utilizes its space better than most. And even though the trunk space is small in overall size, its shape is favorable to most items you’d purchase or a large enough size for a medium sized suit case and some smaller carry ons…

12 Responses to QotW: Tell us your most challenging “reach”