QotW: Did you spend your youth dreaming about someday owning a Nissan or Mitsubishi? 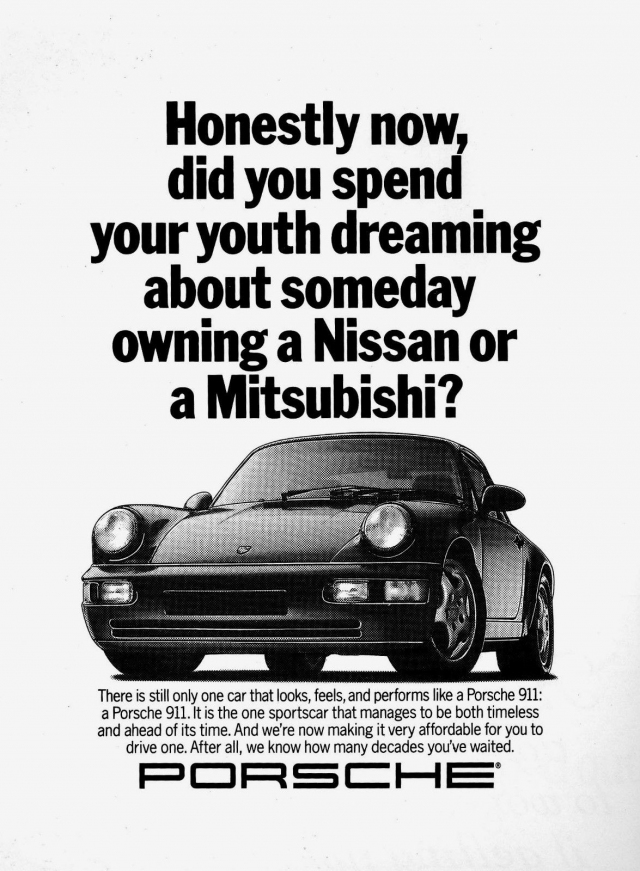 This week’s question comes from an unlikely source — Porsche. Spotted in a Macan forum, the print ad features a 964-generation 911 and thus would have run sometime between 1990 and 1994. Of course, by then Nissan and Mitsubishi had sent forth plenty of incredible cars into the world. Z-cars, Skylines, GTOs, VR-4s, and so on. So thanks, Porsche, for giving us an excellent Question of the Week (for the sake of argument, let’s open this up to other JNCs as well).

Did you spend your youth dreaming about someday owning a Nissan or Mitsubishi?

The most entertaining comment by next Monday will receive a prize. Scroll down to see the winner of last week’s QotW, “What’s the best JNC you can find for $1,000?” 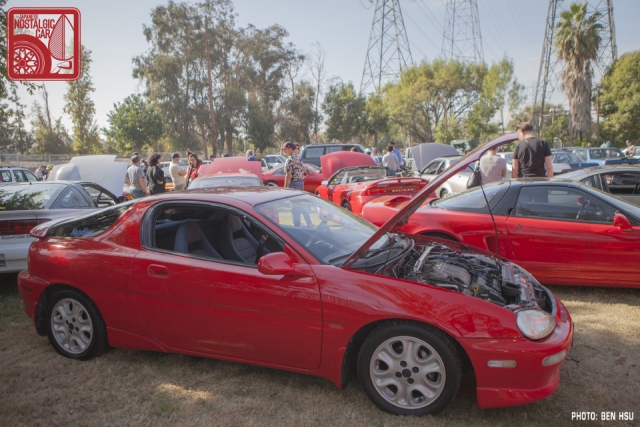 The winner last week was Tom Westmacott, who lives in the UK and thus has access to the cheapest used car market (especially relative to new car prices) we’ve seen anywhere. Tom also correctly calls us out for not publishing enough material on his pick, the Mazda MX-3. We’ll rectify that soon:

In the moist climate of the UK, rust is the grim reaper that denies us classics. As such, those models that have more recently graduated to nostalgic status are the ones that are most likely to be available in half-decent condition for low prices, so we’re looking at the early nineties bubble-era cars. Obviously there’s no Skylines or NSXes for a grand, so we’re looking out for the forgotten and overlooked cars, where the efforts of their creators were quickly forgotten by the fickle marketplace.

The Mazda MX-3 is a great example; a specially made 1.8L V6 in a bespoke three-door coupe bodyshell on the 323 platform, it’s a great example of the niche-filling and design and engineering over bean-counting attitude that powered the explosion of models in the bubble era. This car sold well in the UK, mainly for its good looks and low costs, but has now vanished from most people’s memories – I’m not sure even JNC have done an article on it.

The model I’ve found is a 1998 car, the last year of production of a car that launched back in 1991, so qualifying for JNC status. The ad is honest about body and paintwork imperfections, however the MoT history speaks encouragingly of extensive underbody repairs a few years ago. With its smooth V6 in a small, light body and neat aero styling, it’s surely worth tidying up and enjoying as a rare, quirky and yet entirely usable example of Japan’s bubble era.

permalink.
This post is filed under: Question of the Week and
tagged: mazda, MX-3, QotW.

23 Responses to QotW: Did you spend your youth dreaming about someday owning a Nissan or Mitsubishi?