Posted on November 4, 2015 by Patrick Strong 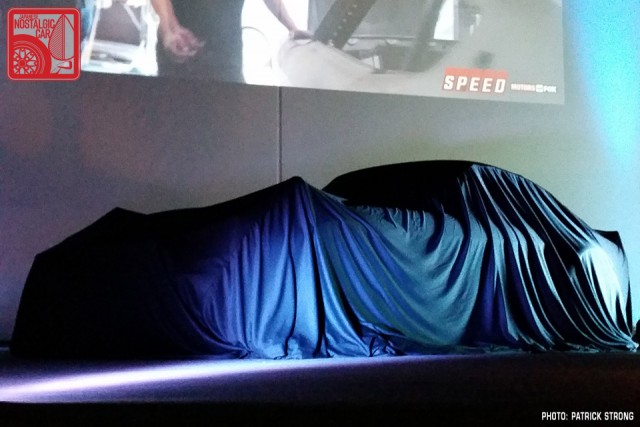 It was right there, lurking ominously beneath a dark gray cover in the middle of the GReddy Racing parking lot. We all knew what it was, and we had a pretty darned good idea of what it was going to look like, what with three behind-the-scenes videos splashed across the internet and enough social media heat to make a Kardashian proud. Beyond that, there was the thing itself, keeping scant few secrets under its tarp: anyone could see that it was bespoilered, widely flared, and packing a pair of JDM fender mirrors. And yet, despite being the worst-kept secret in the tuner car world, none of us knew exactly what to expect when the wrapper was removed from the Fugu Z, actor Sung Kang’s restomodded 240Z named for a potentially lethal cut of sushi. 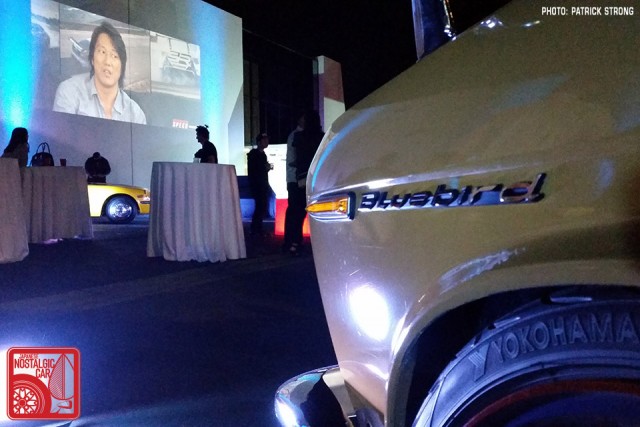 One fact was beyond dispute, though: the object under the sheet was most assuredly the product of a highly professional, six-figure build, one that had been pitched by the marketing head of GReddy Racing and assembled from the finest designer-label components available. Perhaps for that reason there was a whiff of cynicism undergirding all the excitement in the moments leading up to the car’s unveiling last Friday. Would the Fugu Z be nothing more than a cynical exercise in public relations? 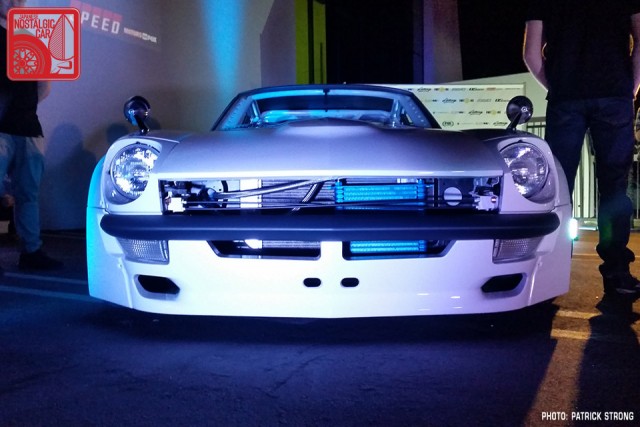 Having spent some time getting to know the players involved in the genesis of Fugu Z, we can assure you that the answer is: not remotely. The Fugu Z is instead a dramatic paean to everything that is good about car culture in 2015. More than just an amalgamation of steel and carbon-fiber, it is a rolling tribute to friendship and nostalgia, to faith and aspiration, and perhaps above all, to seizing the moment. It is a rock star of an automobile, and like so many rock star origin stories, this one begins in church. 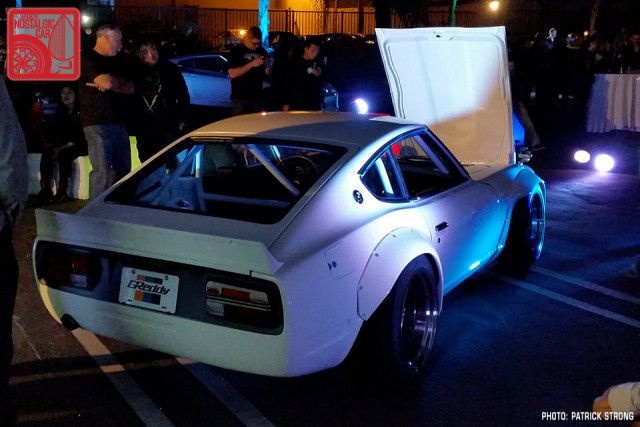 One Sunday morning last April, James Yelton went to his local house of worship and offered up an unusual prayer: he asked for divine intervention in finding a celebrity to purchase his 1973 Datsun 240Z, which had been on the market since January but had failed to attract any interest from serious buyers.

Given the recent proliferation of automotive-themed reality shows, Yelton figured his car was as good a candidate as any for the Hollywood treatment. The owner of a flooring company in Lancaster, California, he had purchased the 240Z after discovering it buried beneath 15 years’ worth of hoarded debris in a customer’s garage. Yelton had thrown a set of “Wal-Mart tires” and a new battery at the car to make it somewhat roadworthy, but his vision of more fully rehabilitating the Z was derailed by plans for a home expansion, and the Datsun was placed on the market… only to be met with the customary barrage of Craigslist flakes and four months of frustration. 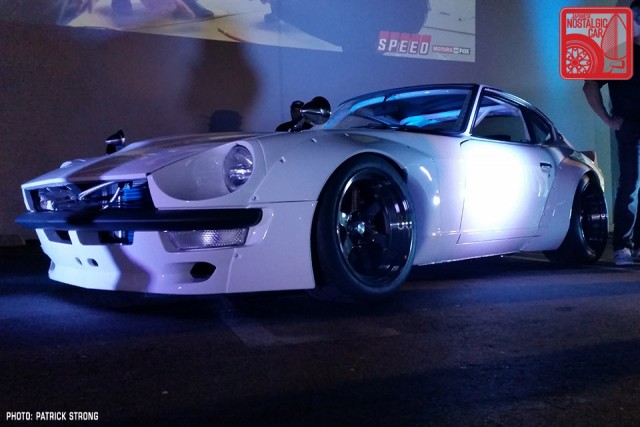 Still, when James’ wife Laura fielded a call from “some random guy” that same Sunday to inquire as to whether the Datsun was still available, a famous customer was the furthest notion from the couple’s minds, even after a red Porsche Panamera pulled onto their five-acre property twenty minutes later and spit out a small contingent of what Laura described as “legit Asians from LA.” After exchanging the usual pleasantries, the group descended on the 240Z, spending two solid hours poking and prodding. What they found was a hugely original, rust-free California car still wearing its classic blue plates and period slot mags, in reasonably drivable condition. They seemed interested. But that prayer… would that go unanswered?

A cordial relationship having been established, one of the “legit Asians” gestured to his tall, handsome friend presently examining the 240Z and quietly asked the Yeltons, “You don’t know who that guy is, do you?” No, they couldn’t say as they did. Well… 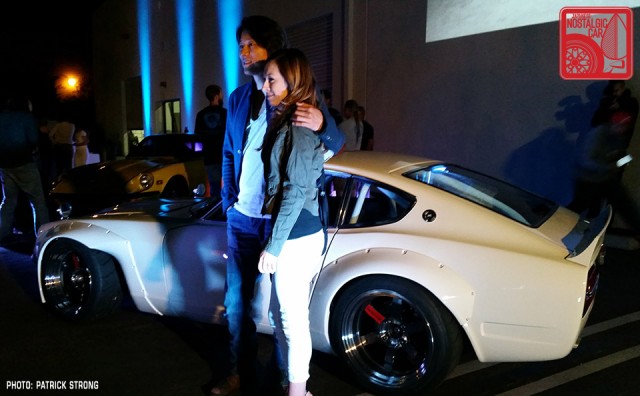 Growing up in Georgia in the 1980s, American muscle cars were the prevalent dream machines of Sung Kang’s youth. “There weren’t a lot of Japanese cars around,” he said, but noted one important exception: the Z. “For me, that car is so inspiring,” he said, specifically citing the legacy of Paul Newman’s career in Bob Sharp’s iconic red, white and blue racers. Adventures in a college friend’s memorable Z31 further cemented the Z’s place in his heart, but sports car ownership would be delayed as Kang labored to find his footing as a working actor in Los Angeles. Then came critically acclaimed roles in Better Luck Tomorrow and The Fast and the Furious: Tokyo Drift, and finally, after a decade of struggle, Sung Kang was an “overnight success.” The ubiquitous Porsche 911 soon followed, and Kang became an avowed “Porsche Guy.” 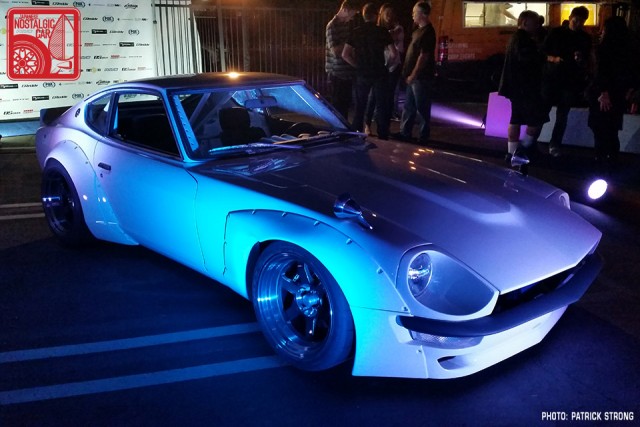 It was a shared love of German machinery that formed the basis of Kang’s friendship with Greg Hwang, owner of an independent Porsche repair shop in Pasadena, and with Michael Jen, an area Porsche collector. Sensing the need for a therapeutic, male-bonding project as they eased into middle age (and to feed Kang’s desire to go racing) the trio initially decided to build a vintage 911 into a track car, but quickly dismissed the idea due to the high costs associated with the marque. “We’re weekend warriors,” Kang admitted. “Let’s be responsible.” Their search for a more cost-effective project soon took a turn for the nostalgic when the three Porschephiles discovered they shared an emotional connection to the 240Z. Seeing tremendous potential in the car (and perhaps wanting to break from the herd of would-be RWB/Magnus/Singer types) they began their search for the perfect project Z… a search that would eventually bring them to the doorstep of James and Laura Yelton. 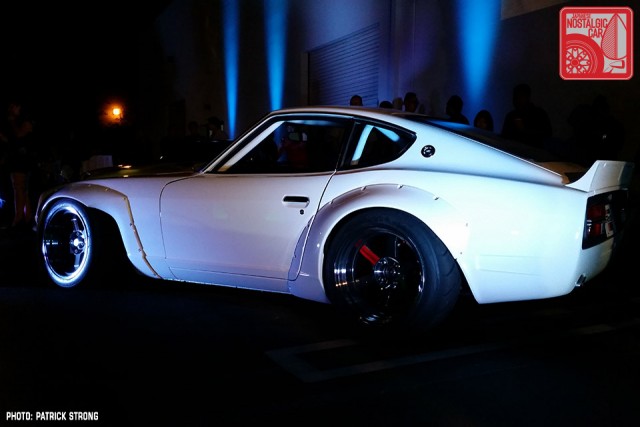 A deal was struck, and soon, Sung Kang was on the road in his 240Z. But where was he going? Exactly what sort of Z was he going to build? Stock restorations left him cold; nostalgia, it would seem, is not the same thing as passion. “You see nice Zs, but there’s no chemical reaction,” he said of straightforward rehab projects. However, there was one 240Z that caught his eye, one that will be well-known to readers of Japanese Nostalgic Car: Kevin Yeung’s wide-fendered “White Devil.” “You see Kevin’s car, and that’s the inspiration,” Kang said reverently of Yeung’s outrageous ride. Deciding on a wide-bodied look for his own car, Kang soon discovered and fell in love with Rocket Bunny’s rendering of a body kit for the vintage Z. There was just one problem: the kit didn’t actually exist. 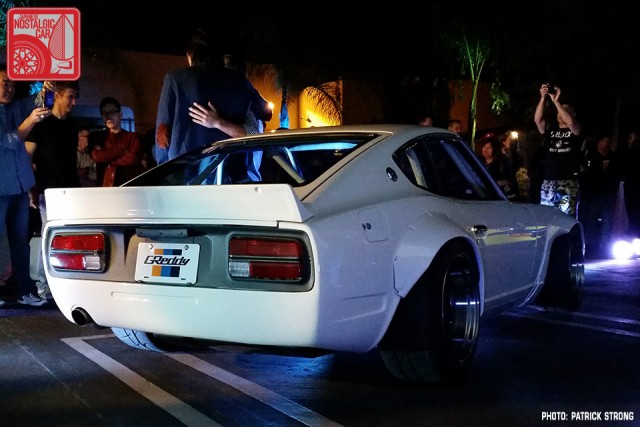 Earlier this year, Mike Chung, marketing manager of GReddy Racing was thumbing through his Instagram feed when a picture of Rocket Bunny’s wide-bodied Z rendering popped up from @sungkangsta with a plaintive inquiry: could anyone in Southern California source that kit? Chung showed the post to his boss, GReddy USA president Kenji Sumino. Though he knew that the package Kang wanted was nothing more than vaporware, Sumino’s response was immediate and emphatic: “Contact him.” 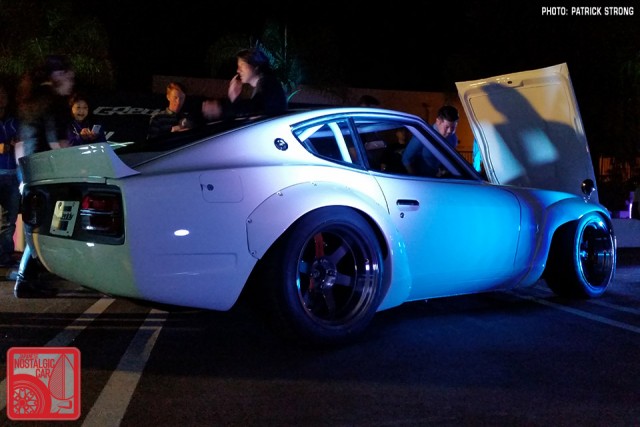 GReddy is, of course, the exclusive North American distributor of TRA Kyoto’s Rocket Bunny aero kits, and Sumino was confident that his relationship with the home office in Japan could make Sung Kang’s dream a reality. In short order, the 240Z was delivered to GReddy’s US headquarters in Irvine, and plans for a comprehensive restomod were drafted. “We wanted to build a car to have fun in,” Sumino said, “a whole concept, but not overpriced.” Oh, and one other thing: Sumino wanted to show the finished car SEMA, only a few short weeks away. Kang gamely said yes, and the project commenced. 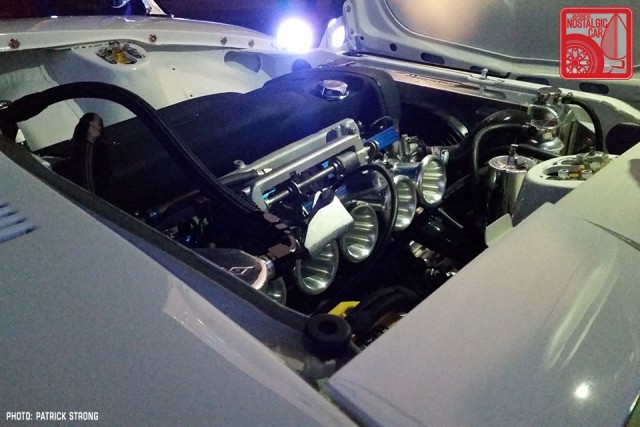 The Z was stripped to bare metal and expertly repainted in Kilimanjaro White, an original Datsun color inspired by the mountain on the continent where the 240Z would win the Safari Rally. A racing cage and carbon-fiber seats were installed… and not much else inside. For power, several options were considered, from a traditional built L-series to an original S20 (the latter being rejected when the only one on the market came with a $50,000 price tag). Eventually, the team settled on a normally aspirated RB26, tuned to produce 300-350 horsepower by Sumino’s estimate.

A coilover suspension and Nitto R-compound tires mounted on ultralight Volk TE37SV rims would keep the whole package stuck to the ground. The car’s calling card, however, would be that Rocket Bunny aero package. Despite describing himself as “not a kit guy,” Kang knew that the Rocket Bunny look was right for his car. Working with the GReddy team, TRA Kyoto fabricated a prototype Z kit for this project, with the result being a wide-body effect that evokes the Group 5 racers of the 1970s. 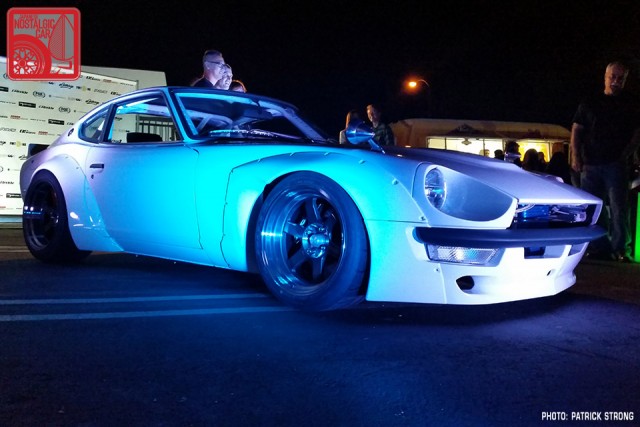 After hundreds of man-hours, untold cups of coffee, and constant presence of a Fox Sports camera crew documenting the entire process, Fugu Z was miraculously completed just in time for the 2015 SEMA Show, with the plan being for Kang to drive the car from Los Angeles to Las Vegas for the event. But first, a few invited guests got a sneak peek at Fugu Z at a low-key preview event at GReddy HQ last Friday. Together, Sumino and Kang were a study in contrasts: the GReddy boss looking for all the world like an expectant father pacing in the delivery room, and the actor lurking coolly in the background.

Darkness fell and word was passed through the crowd: the cover was about to come off. We gathered around, cameras held aloft, as the fathers of Fugu Z made the obligatory remarks… and then it was there, exposed to the public for the first time. But unlike many such unveilings, there was no gasp, no shock of surprise. No, when Fugu Z broke cover, the crowd said, “Yes!” It was exactly what we were expecting it to be: a clean and simple, but brilliantly executed concept, built to the highest standards and ready to hit the track. Egged on by the crowd, Kang slid behind the wheel and turned the key. After a few moments hesitation, the RB26 rumbled to life with a quietly confident exhaust note. A final dyno tune, alignment and installation of chassis electrics were still in the offing, but otherwise, Fugu Z was a done deal. 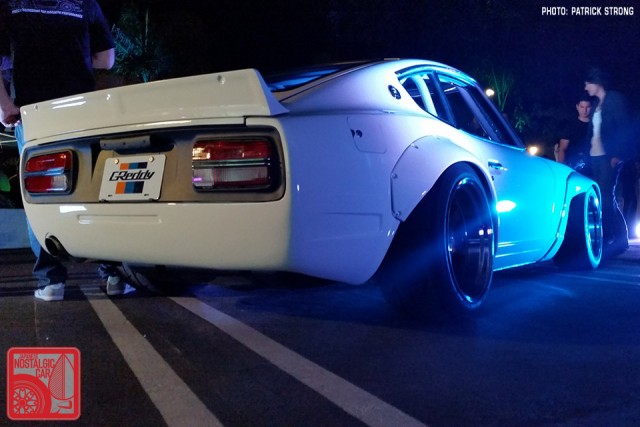 No doubt, there will be skeptics who see Fugu Z only as a marketing exercise, and there is plenty of support for their case. The notion that this was truly a budget build doesn’t really hold up to close scrutiny (at least as most people define the word “budget.”) Kenji Sumino made no secret of the fact that he wanted to take the car to SEMA to prove a point: that a classic Japanese car could garner the same level of respect as the American sleds that tend to dominate the event. From that perspective, Fugu Z is a highly deliberate build, one that seems to have been born not as a passion project, but as a PowerPoint presentation on wheels.

That perspective is wrong. We have interviewed the major players behind Fugu Z, and we can assure you that its heart is authentic and its soul is pure. Really, Sung Kang just wanted to go racing and hang out with his buddies, and Kenji Sumino just wanted to build a really excellent vintage Z. That they possess the means and facilities to accomplish these aims at an incredibly high standard is incidental… they’re just car guys.

Thankfully, their creation is more than just a car.