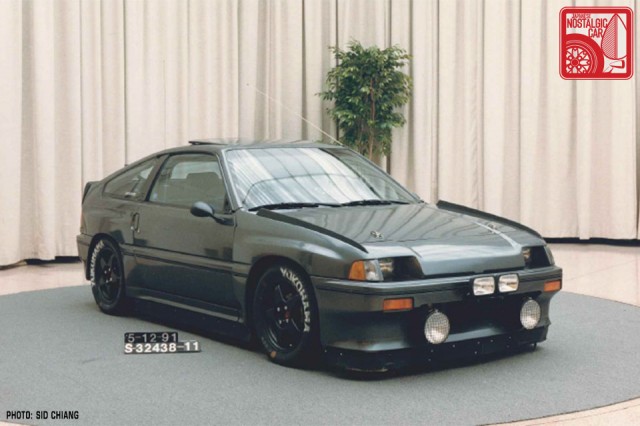 Sid Chiang is a long-time veteran of the automotive design world. He’s held positions at GM, where he worked on cars like as the C7 and Camaro, and before that Ford, where he was lead exterior designer on the ST44 Probe and Ford GT. Prior to today, there were only three known photos of Sid’s Mugen CRX on the internet, all mysteriously taken inside a Ford studio. Here’s how it happened in Sid’s own words. —Ben

I’ve always had the love of sporty cars, especially small displacement 4-cylinder imports. As a teenager in the 70s, my first car was a rusty 1969 Triumph GT6+ that I loved and cherished. I drove it to into the ground and as many teenagers do, ended up nearly killing myself in it. But it didn’t kill my addiction to 4-bangers. 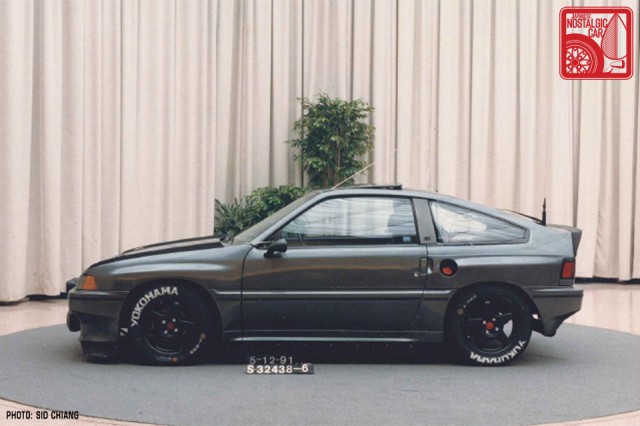 In the summer of 1985, I entered my career with Ford Motor Design Staff and was now in the position to buy my first new car. It wasn’t a hard decision as nearly all makers of British 4-cylinders had gone bankrupt or were about to. The Big Three offered pretty mediocre, lifeless econoboxes. I wanted something new that I could modify, but priced at less than $15,000.

I decided on a brand-new Honda CRX Si, and within months I began my hunt for more speed. For a car weighing in at under a ton, 86hp was brisk for the time but just adequate to me. At the time, “tuner cars” were just on the horizon and hop-up parts were very limited. 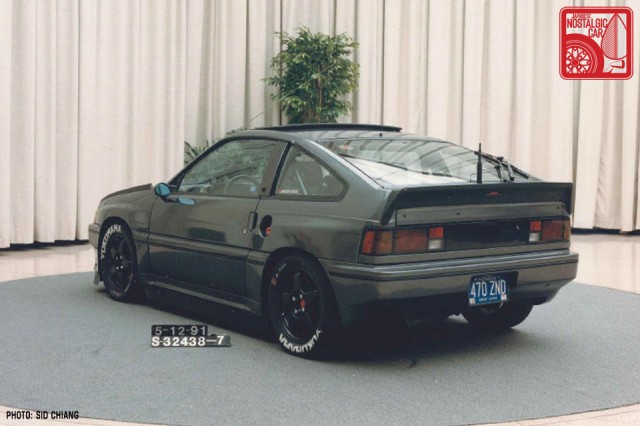 In the back of Car & Driver magazine I found an ad for Jackson Racing, the only apparent speed source for Hondas. They had a turbo kit to boost the power up to around 145hp. It was non-intercooled and the power was limited by the lack of pre-ignition mitigation technology. It was also a install-it-yourself kit requiring a severe case of bashed knuckles.

Next on the mod list was a set of Enkei turbine wheels and lowering springs for the rear. The front was a torsion bar design so it just needed to be cranked down to match. The result was just short of revolutionary in MoTown, where big blocks were the rule. No one was hot rodding little cars in the area. The result was exhilarating! I was never sure how much power output I had but it was keeping up with most of the local Detroit Iron. In a world of Goliath, having a li’l David was a blast. 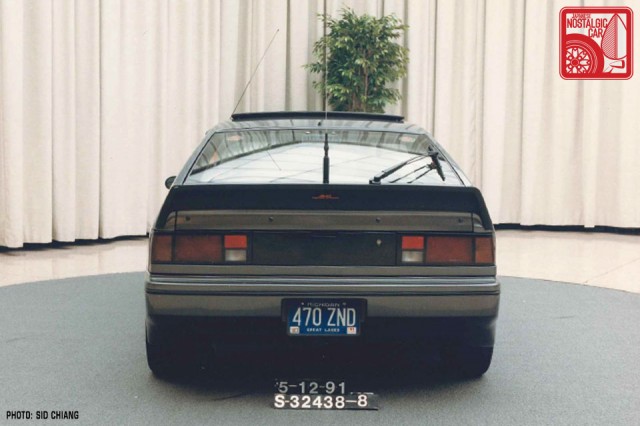 All was great until “stupid” caught up with me one night on Telegraph Road, Dearborn’s main drag akin to Woodward in Detroit. , as I outran a modified first-gen Camaro. No sooner had I won the race than my radar detecter went ballistic. In a panic moment, I attempted to exit but spun a 360 instead, bashing my front left against the guard rail. My car was ruined and I got to sit in a cell till the next morning.

Months went by as my wounded CRX sat in my garage awaiting my next move. When began repairs, I found that replacement fenders cost more than a Mugen wide body kit I had seen in a Japanese publication at the University of Michigan library (this was way before the internet), so I ordered it direct from Japan. 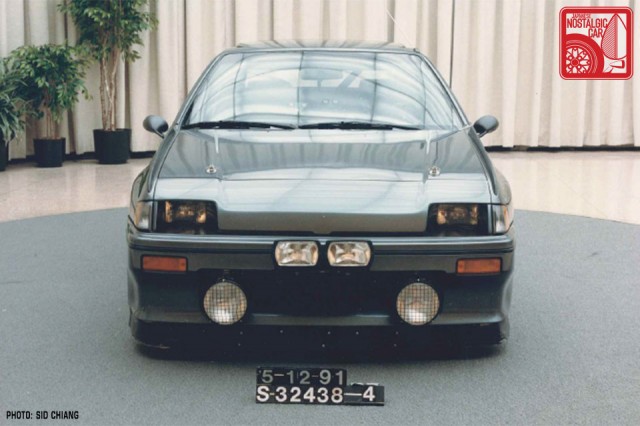 The kit consisted of authentic lightweight injection-molded body panels. The front fenders were complete replacements while the rears were bonded over the existing panels. Both front and rear bumpers were made of the same composite and definitely not crashworthy. I also had to modify my flush 1986 headlamps to accommodate the older recessed design for the kit.

As a designer at Ford, I had access to the latest experimental paints being evaluated for future products. I used a pre-production BASF color-shifting hue that appeared a dark gray indoors. Outside, however, it would transition from tints of blue, purple, green and everything in between. This color was not on any vehicles on the road at the time, though eventually it was used on limited runs of Mustangs. 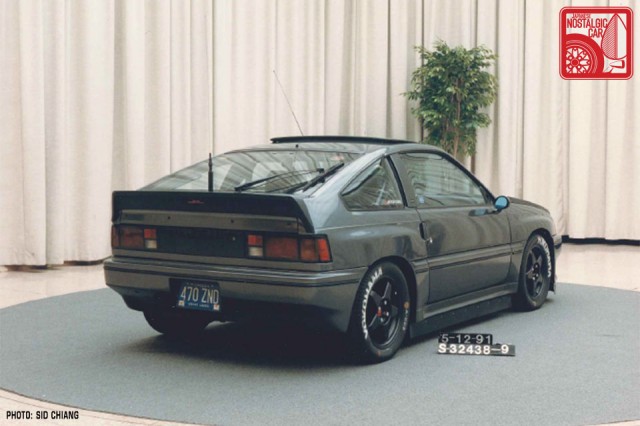 I installed Tokico gas struts and upgraded the springs. I switched the wheels to white Weds five-spokes, which were the trend those days, but wanting to be radical I blacked them out. I drew up stencils and sprayed the Yokohamas with white paint, a style that seems to have come back into fashion.

The exhaust was custom made and tipped out through a single SuperTrapp. The first turbo and engine suffered damage from the resulting crash so I acquired a donor engine from Corky Bell at Turbo Tech. It had been blueprinted with a lightened flywheel. I went out on a limb and added their big turbo intercooled kit which pumped out over 230hp. 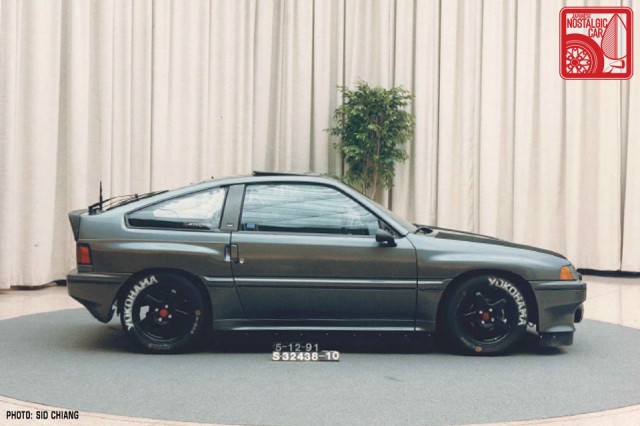 The combined result was massive, in visual impact and speed! I was working on designing the second-gen Ford Probe at the time and we brought in all types of sporty cars for reference. Although not exactly in the same class as the Probe, we thought it would be fun to get some “round the clock” shots of my CRX in the Ford Design Center “Dome,” where these photos were taken. Because of my proximity to the Ford complex and the extreme nature of my CRX’s exterior, people often asked me if this was “test car.”

By 1991, I had stripped out my interior and the car weighed in at roughly 1,850 lbs. With a horsepower ratio of 8-to-1, it suffered major traction problems. Despite all the wheelspin, it managed a timed run (with an accelerometer) from 0-to-100mph at +/-13 seconds! 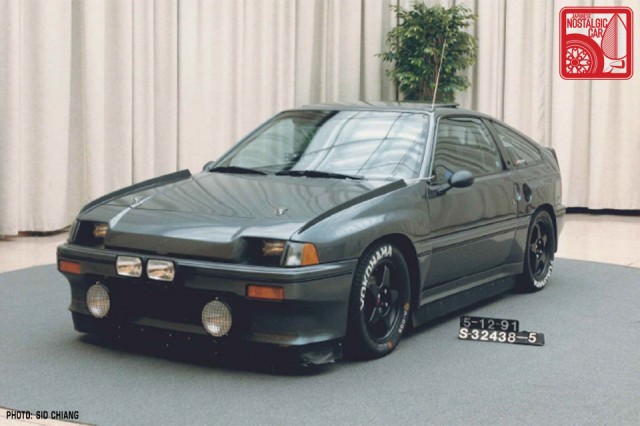 Unfortunately, all good stories come to an end. My CRX eventually suffered a mysterious electrical gremlin. The car would start up excessively rich and idle rough, until it reached a certain temperature at which point I could restart and everything would run normal, until it cooled down. Then the cycle would need to be repeated. One day, it didn’t start at all. A pending divorce from my first wife dissuaded me from debugging the car and it sat in my garage without a plan.

By 2003, I had remarried and was moving to a new home. Needing to put a resolution to this project, I placed it up for sale on a CRX forum. Within a few days, it was sold sight unseen, except for a video I made, to a guy in New Jersey who had plans to update and resurrect this once-great car. He paid me and sent a car carrier to deliver it home. We had planned on staying in touch but I eventually lost contact with him. To this day, I often regret having sold this car and wonder where it is now. Perhaps, I could buy it back someday.

Sid Chiang is currently Exterior Design Chief at Mack Trucks. Special thanks to Dennis Salnikov for introducing us to his colleague.

permalink.
This post is filed under: profiles and
tagged: crx, honda, mugen.