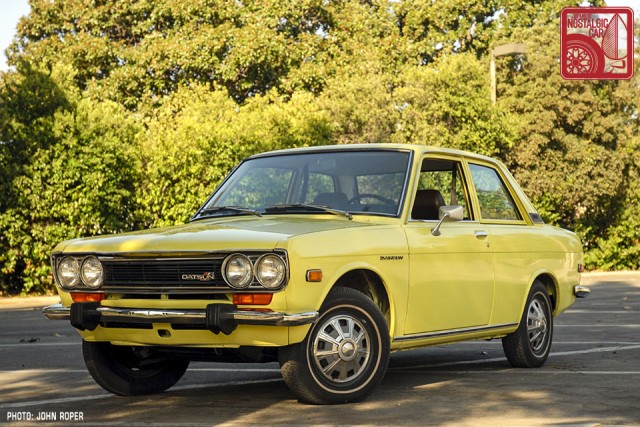 Long before social media, Randy York was one of the first members of the Bluebirds email list. He ran United Five-Ten Owners (UFO) SoCal from the mid-80s through the 90s before it faded, and was a founding editor for the definitive 510 bible, Dime Quarterly, which started in 1995 and ran until 2008. It is with great sadness that we tell you that Randy York recently lost his battle with cancer. It is in his honor that we are re-running this story, originally published in 2008, today.

There’s no question that one of Nissan’s biggest sales successes in the USA was the PL510 series, sold from the end of 1967 until the end of 1972. Initially, the 510s had many features unique to the year they were built. The ’68 model was one-of-a-kind in many ways, such as hand-clap wipers. The ’69 model had several changes to make it singular as well, like the addition of round rear side markers and an updated dash. When the ’70 came along, it was changed up yet again with different lights, badges, an all new dash, and many other updates. For whatever reason, be it saving money on production, or cutting down on R&D time, from that point on they were essentially all the same. Very little differentiates a ’70 from a ’71 from a ’72. And then came the ’73. 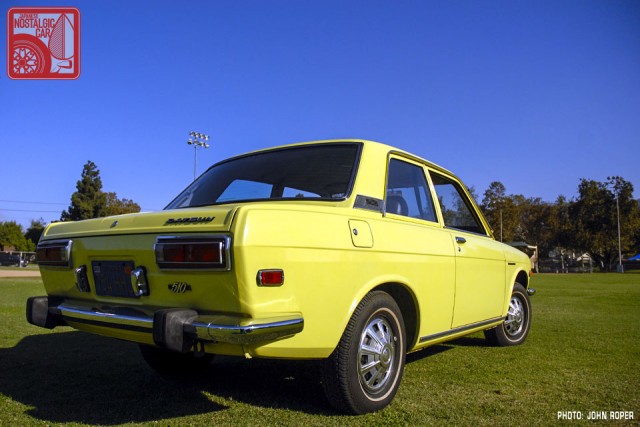 Here’s where things get fuzzy. Many say there is no “official” 1973 510. All of the vehicles called ’73s were made in the last 3 months of 1972. But building the next model year’s cars at the end of the calendar year is a practice nearly as old as cars themselves. While at first glance it looks exactly like a ’72, there are many minor differences. 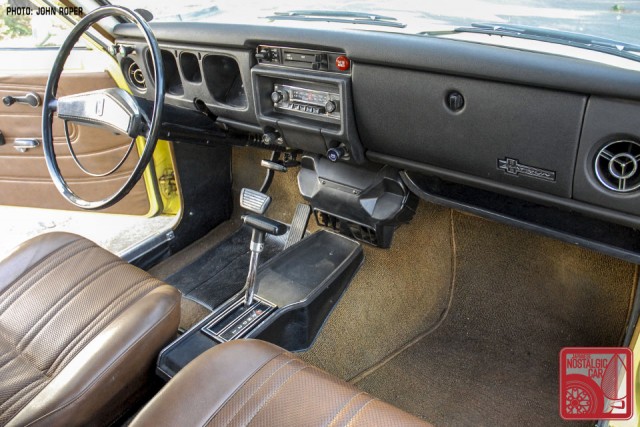 It almost appears as though Nissan was gearing up the 510 to make it pass the newer, more stringent DOT crash standards that had threatened to kill it. Like its ’73 Datsun 1200 brother, it got stouter bumpers, bigger bumper overriders, and stronger bumper brackets to help it take a hit better. 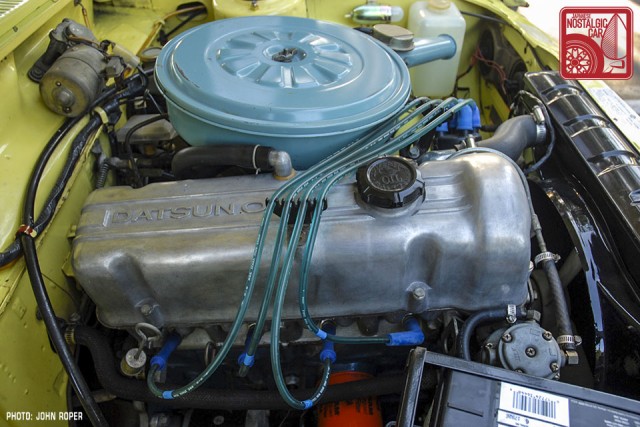 Presumably, either this was not enough to make it work for the DOT, or Nissan decided it was finally the end of the line for the ol’ Dime. As such, by the end of December 1972, production finally ceased on any Japanese-built 510s bound for the USA.

There are many unique features to a US ’73 510, so many that it would take pages to outline them all. The highlights are rear window defrost, illuminated headlight and wiper knobs, inertia reel seat belts, and a unique heater control panel. Also, rumor is that all of the ’73 510s are 2-door sedans. Supposedly, no wagons or 4-door sedans were built. The real ’73 nerds will regale you for hours on all of the differences, but we’ll leave it there for now. 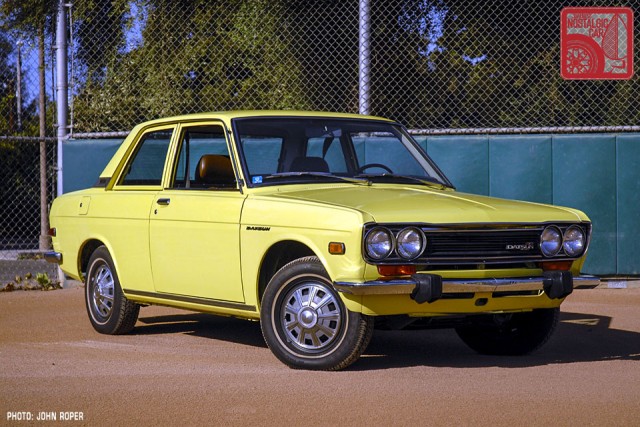 This particular ’73 510 belongs to Randy York of Burbank, California. He’s had it for a few years, having bought it from the original owner. The mileage you see on the odometer (just over 50,000 miles) is documented to be actual mileage. Based on how the car looks and drives, I can believe it.

It still wears all of its original paint and interior, and it looks phenomenal. Fortunately, Randy has many more 510s to play with and modify, so this one will stay all original for as long as he owns it. It truly is a time capsule as it runs and drives just like new. Also, with a construction date of December 1972, it is likely one of the very last 510s ever built in Japan.

This car will soon find its way to the Datsun Heritage Museum in Murrieta, California for an extended stay. If you get a chance to stop by, definitely take a good look at this one. It’s a rare example of a variation on an icon, and is in even rarer condition. It’s definitely one of a kind. 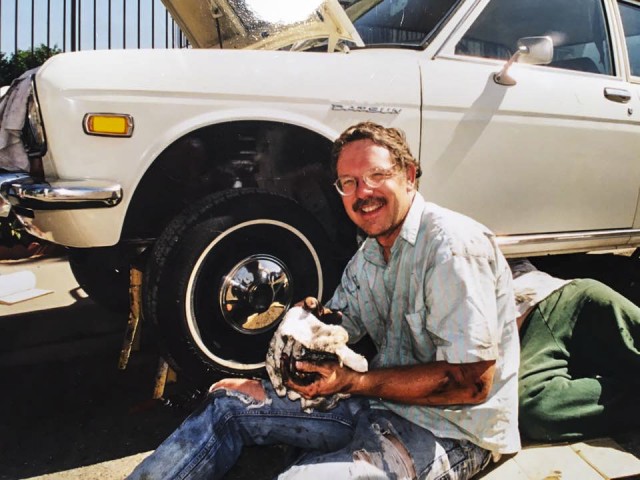 UPDATE: The following is a personal story about Randy, an addendum to remember his contributions to the 510 community.

I first met Randy in 2001 at the Mt. Shasta All-Datsun Meet in northern California. Due to our shared love of 510s, we hit it off right from the start. Once I became a contributor to the Dime Quarterly newsletter, he and I conversed quite a few times through email over the years and he was always quick to help answer my questions, offer advice, or just to make me laugh with a joke.

In 2008, upon learning I was making my first pilgrimage to JCCS, out of the blue Randy offered to pick me up from the airport, and insisted I crash on his couch for the duration of my stay. He only asked one thing in return. He wanted to have two 510s at the show (he owned at least five at the time) and could only drive one. I’m sure you know it didn’t take much arm twisting. We went straight from the airport to his family’s cabin in the mountains to pick up the car you see above.

Ever the generous soul, he suggested that I drive the 510 back down the mountain. His daily driver was a lightly modified 5-series BMW, which meant I had to push this little Datsun for everything it had (and then some) just to keep up. The next day we took off for the show and, wanting to make sure I was having fun, he insisted I drive his VG30E-powered 510 wagon while he drove the “boring” stocker. It was a weekend I will never forget. Not just because I got to drive two really cool 510s, but because of Randy’s kindness, his generosity, and his enthusiasm for both cool cars and good friends.

Though his work with Dime Quarterly, and his many years on the Bluebirds email list, he was an invaluable resource to the 510 community. His knowledge of 510s was matched by very few. It was an honor to know him, and to call him my friend. We will miss you, Randy. 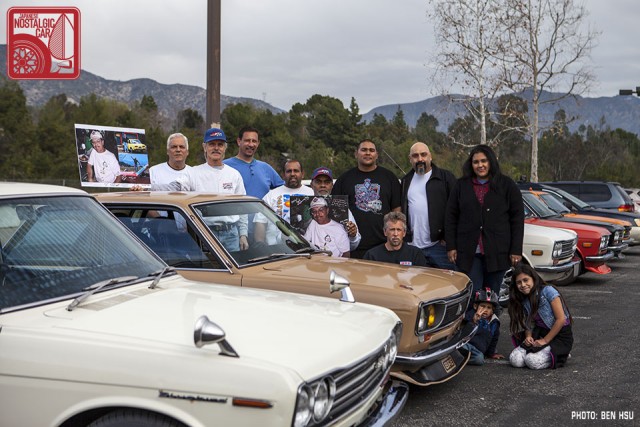 We attended to a memorial gathering held last weekend for Randy’s friends in the car community. It was a small gathering in a parking lot across the street from the hospital Randy was staying in. Friends from his two loves — Datsun 510s and custom American vans — were present. It was decided there that there will be a cruise to celebrate Randy’s life on February 27. If you are interested, please meet at 1919 Verdugo Blvd., La Canada Flintridge, California 91011 at 9:30 am. Special thanks to Sebastian Hill.

permalink.
This post is filed under: profiles and
tagged: 510, bluebird, datsun, nissan, Profiles.