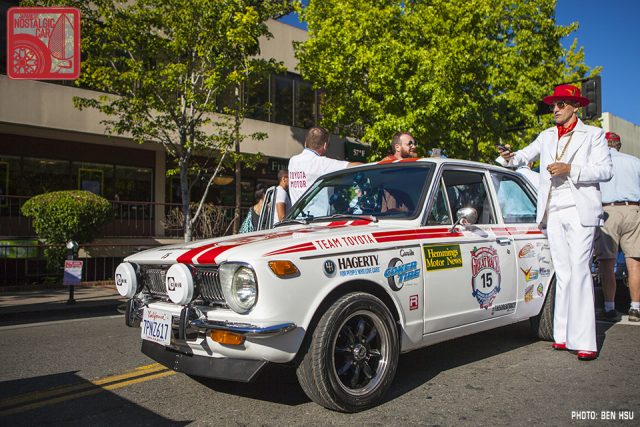 “It’s a bit snug,” says Jamie Bestwick in typical British understatement as he slides his racing seat into position. He bashes into the knees of his navigator, Laurence Foster, who is hunched in the back seat. Bestwick, a 13-time X-Games gold medalist in the BMX category and an Englishman, is dressed like a 1970s pimp with gold chain, bright red scarf, and a hat whose brim radius is larger than a bus tire’s. In the passenger seat, co-driver BJ Baldwin, a Baja 1000 winner, has on bell-bottoms, Lennon sunglasses, and a floral pattern shirt that would make James May seethe with envy.

The three of them are packed a 1970 Toyota Corolla about to embark on a 10-day, 2,500-mile cross-country rally. Bestwick calls it “The Man Can.” 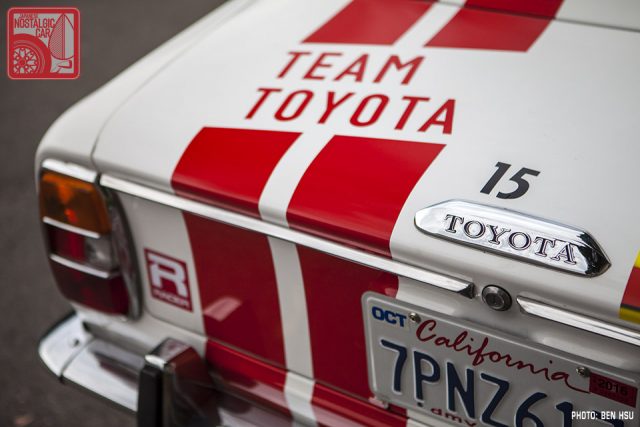 To celebrate the 50th Anniversary of the Corolla, which launched in 1966, Toyota wanted to take the show on the road, entering it in The Great Race, a time-speed-distance rally that crosses nine states. 130 cars compete, all of them built in 1972 or before.

Arguably, the Corolla needs no introduction. It’s the best-selling car in human history, and is far more of a household name than most of the obscure corners of the globe in which it’s sold. What’s perhaps lesser known is that the Corolla was actually a charming car. “We wanted to have fun with it,” said Toyota USA marketing manager Paul Czaplicki. 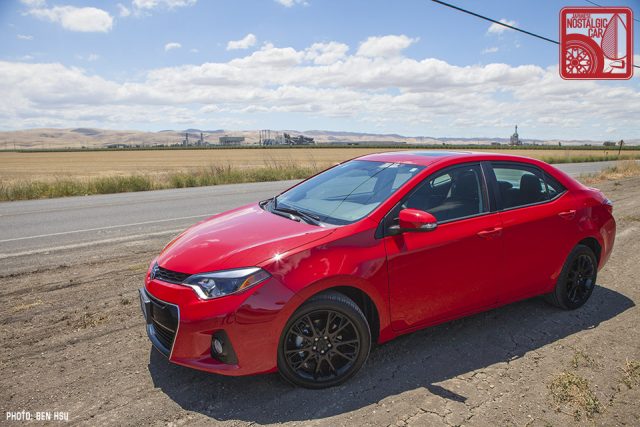 Toyota invited JNC to this year’s Great Race starting city, San Rafael, California, to drive the Corolla before it set off on its journey to the finish line Moline, Illinois. To get there, they flew us to Oakland International Airport where a 2016 Corolla was waiting for us.

Finished in Absolutely Red, a former Lexus shade of beautiful, bright, and (perhaps most importantly to JNCers) solid crimson, it’s a special edition identical to a 2016 Corolla S except for a few cosmetic touches like red stitching and black wheels. That means power comes from a 1.8-liter four mated to the three most dreaded letters in the automotive world today, CVT.

Perhaps as a blessing in disguise, we hit the freeway just as the Bay Area’s appalling traffic reached its peak, thus sparing our delicate sensibilities from the continuously variable transmission’s buzzing drone. It’s a slow crawl, but as we near the Four Points Sheraton that serve as Team Toyota’s staging area, the streets distract us with be-stickered Great Race contestants: a ’55 Bel Air, Porsche 356, and a bunch that look exactly like Chitty Chitty Bang Bang. 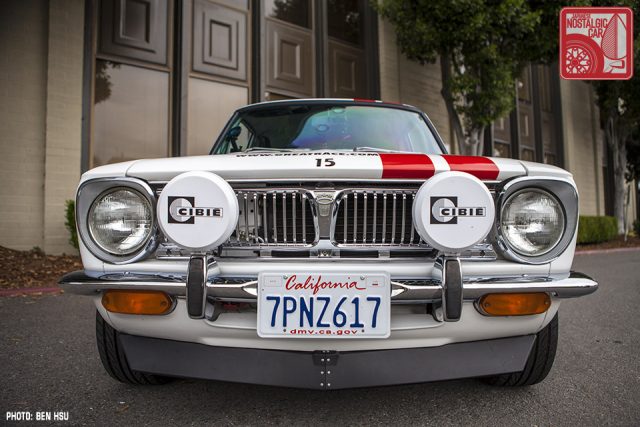 Among them sits the humble first-gen Corolla, a KE10 for those who care about chassis codes. Earlier this year, Toyota had contacted us about purchasing a gen-one Corolla. Apparently surviving examples are so rare that it’s hard even for the mothership to acquire one. We referred them to collector Joji Luz. 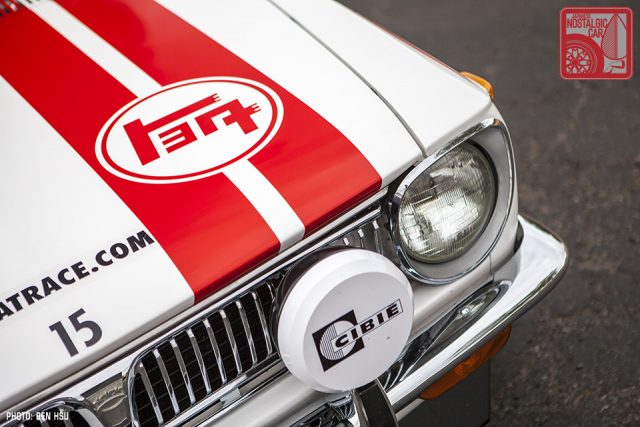 It had been a while since we’d seen Joji’s Corolla, but some things were definitely different. Most obviously, the car now wears a tasteful twin red racing stripe and features a combination of old school Toyota katakana トヨタ and vintage Toyota Team Europe logos. To match, the entire team is decked out red-on-white jackets and shirts, with caps sourced directly from the Toyota factory in Japan. 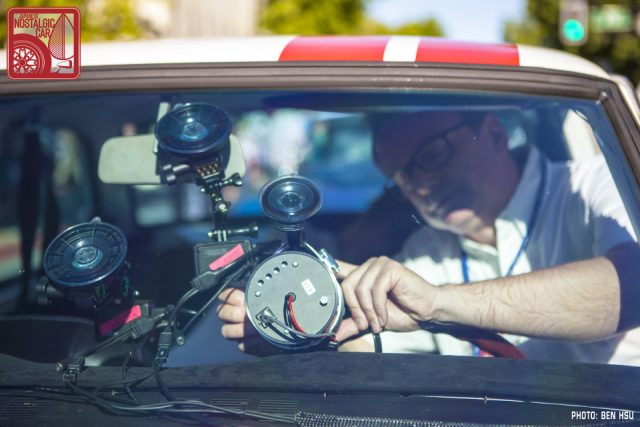 A speedometer the size of a cantaloupe had just been installed, taking its reading from the hub. Foster holds it in his hands while Bestwick tosses us the keys. The auxiliary speedo would eventually be mounted on the windshield so the driver won’t have to look, several times a minute, down at the actual speedo.

Maintaining accurate velocity in time-speed-distance rallies is crucial. Especially over long distances, even a small miscalculation can cause an early or late checkpoint arrival, either one costing valuable points. Prescribed speed must be maintained at all costs. If you miss a turn, you then have to go faster than the route instructions dictate, for however long you were off-route, plus what it takes to get back on track. See? You’re falling asleep already. Besides, at night the dash bulb above the factory speedometer is so dim that in terms of readability the gauges might as well be located in Hokkaido.

We ask if sitting in the back seat for 2,500 miles is going to be an issue for Foster. “I’ll be doing too much math to think about it,” he replied. Modern technologies such as laptops or GPS are strictly prohibited on The Great Race. 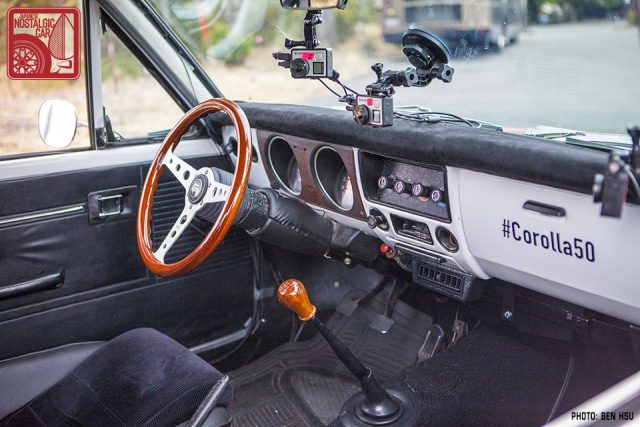 We lower ourselves into the racing seat where the original vinyl-wrapped bucket was fitted. “Don’t worry, we didn’t throw anything away,” Foster reassures us.The door slams with solidity, but we’re acutely aware that we’re in a 1,565-pound car smaller than a modern Mini with no crumple zones.

It’s a bit awe-inspiring to think that we are in one of the first Corollas, a car that would spawn 11 generations and go on to sell 43 million units. There are some design quirks: the ignition is on the left of the steering column, for example, and the key turns towards the driver to start. Try to turn it off like a regular car and you’re treated the sound of starter teeth grinding against ring gear.

Slipping the transmission into first, we are pleasantly surprised by the modern tightness of the gates. A 50-year-old gearbox’s shifter is supposed to wobble like a malfunctioning Segway. The clutch, however, was as vague as a presidential candidate’s promises, as expected. 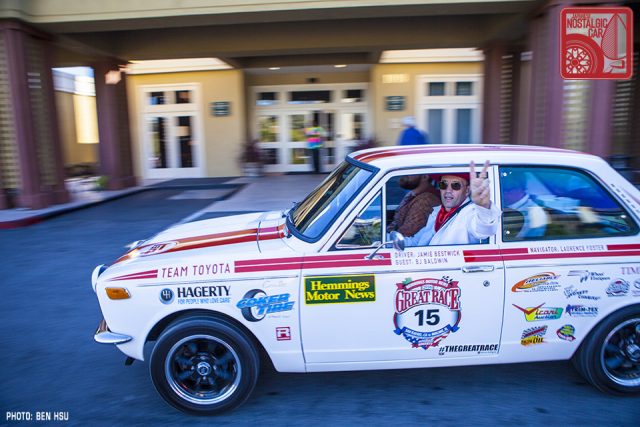 With three men and 60 ponies on board, we have to really jam the accelerator into the floor to escape the friction generated by the Yokohama S-Drives wrapped around 14-inch VTO Minilite replicas. To accelerate at anything resembling a normal pace we have to really wind up the motor to redline, a proposition made iffy with the absence of a tach.

The engine feels strong, definitely strong enough to go the distance, assuming it can pull the car and its passengers over the Rockies. In fact, it’s almost too strong for the car’s brakes. Despite having replaced the front drums with discs, there are nevertheless a few scary moments when opening a door and dragging a shoe on the pavement would be more effective. However much room you think you have to stop, double it. 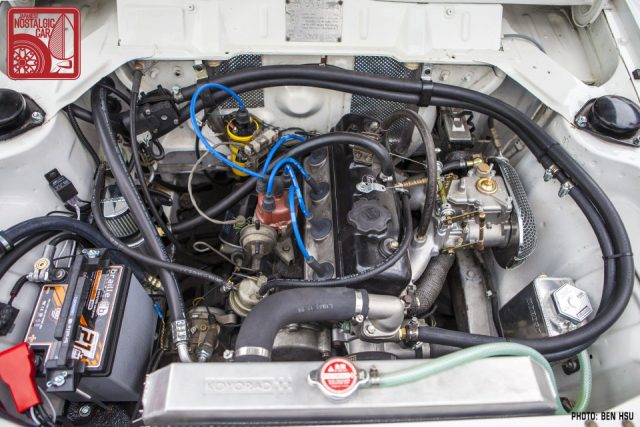 And what’s this, five forward speeds? Ah yes, that’s right. Joji had swapped his drivetrain with the 4K engine and transmission from a Starlet. No wonder the motor felt so stout. The team engineer also added stiffer rear leaf springs to accommodate the added weight of the crew, and the original cardboard-thin radiator updated with a new Koyorad aluminum unit.

Other changes had been made, too. At Bestwick’s request, a Vintage Air a/c system was installed for the summer slog through the American west. That’s understandable. What’s less understandable is the quick dash repaint that left obvious spots of overspray around every black bezel.

Now before the purists freak out, we think this was the right move. Here’s why: KE10s are rare, but Toyota already has a mint 1969 example in their collection. That’s a car that should never be messed with. Joji’s Corolla, clean as it was, had already seen an engine swap and quite likely began life as an automatic. It’s the perfect companion to the museum car, and an excellent candidate for the race. 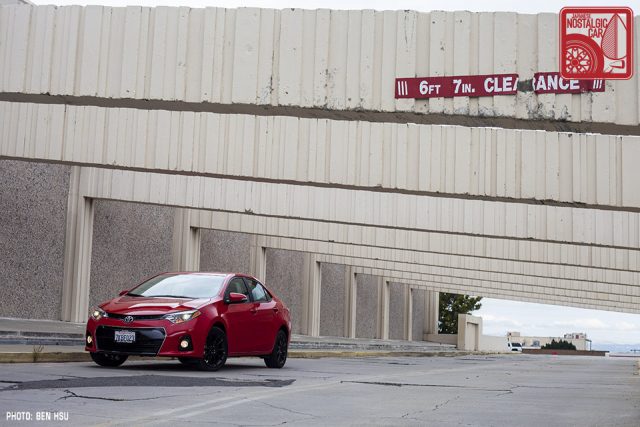 Returning to our 2016 Corolla afterwards, it feels like a limousine. We don’t even mind the drive-by-wire steering — which we enthusiasts love to gripe about — as it is literally decades ahead of the twitchy Momo Indy in the KE10. At 140 horsepower, it more than doubles the output of the 4K.

That’s not really a lot for half a century of progress, but the ease with which the new Corolla can get up to 75 mph and just cruise without breaking a sweat is nothing short of astounding when you stop and think about it. But we don’t, and we take modern cars for granted. In 50 years the Corolla has evolved from Man Can to a fuel-sipping land missile that you can drive cross-country without the slightest worry. 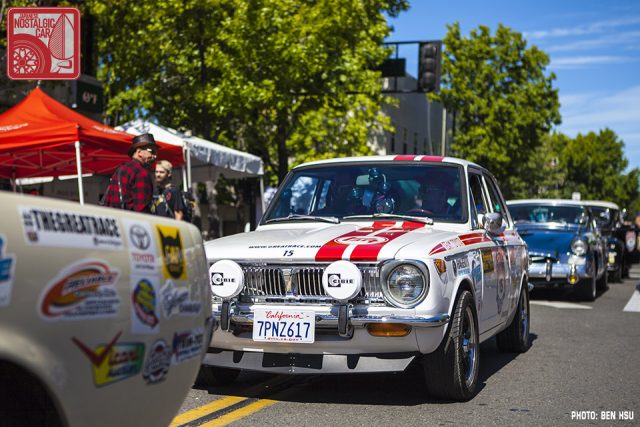 The next morning the teams stage in downtown San Rafael. The Toyota crew seems confident in their prospects. If not, they have a 2016 Corolla, TRD Pro 4Runner and Land Cruiser support vehicles, all finished in the same retro livery, to help.

Bestwick and Baldwin pose in their 70s costumes and signe autographs as passers by take loads of photos. Except for a Japanese team — one that had shipped over an Isuzu Bellett GT-R, C30 Nissan Laurel and a pair of Nissan Figaros — most spectators have no idea what the car is. “Oh, it’s a Corolla!” they announce with glee when they find out. 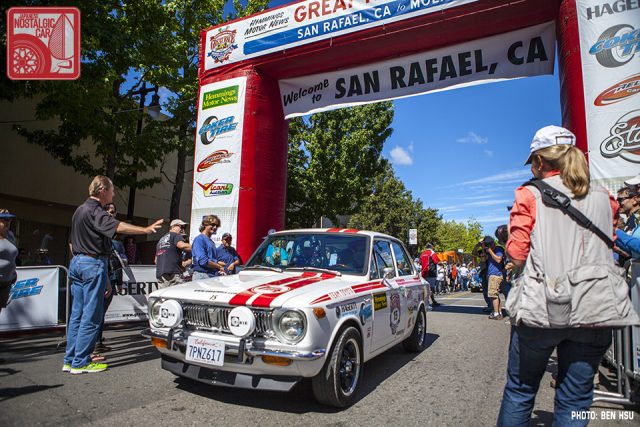 We suspect that’s a scenario that will continue to play out as the race cuts a path across the country, stopping in 19 cities along the way. The majestic tailfinned land yachts and opulent European tourers are expected, but a 50-year-old Corolla isn’t. Everyone is instantly charmed, and to the average driver that instantly makes a modern Corolla, a car that’s so easy to take for granted, cooler as well.

To follow the progress of the Corolla team, check out Racer.com/GreatRace. Bonus images below. 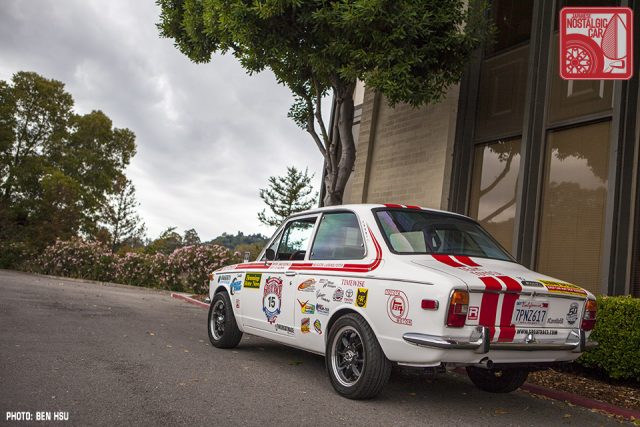 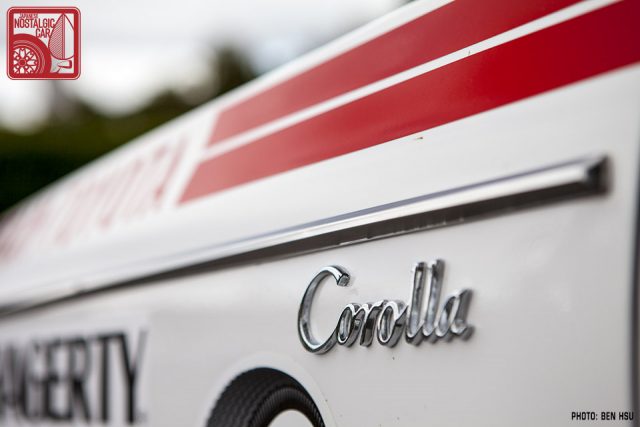 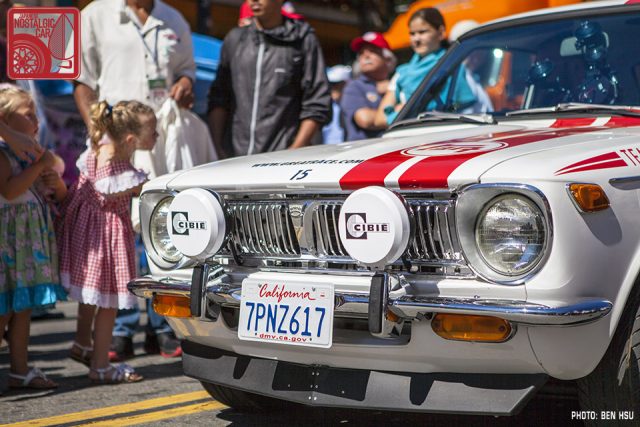 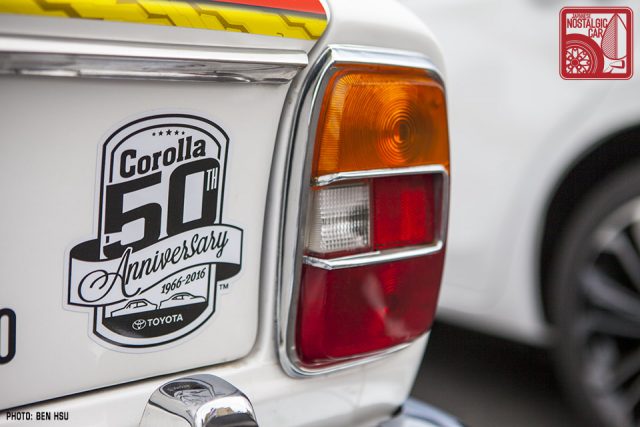 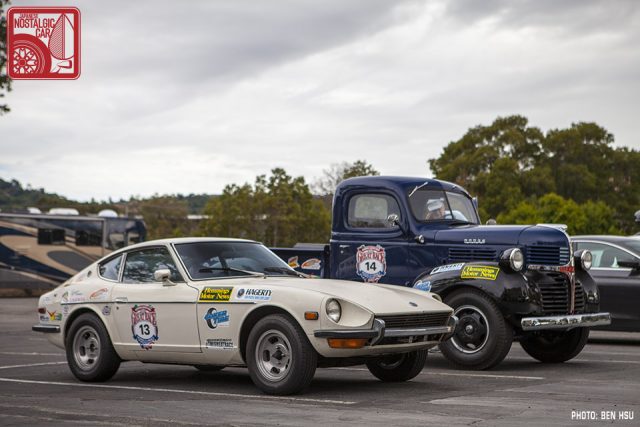 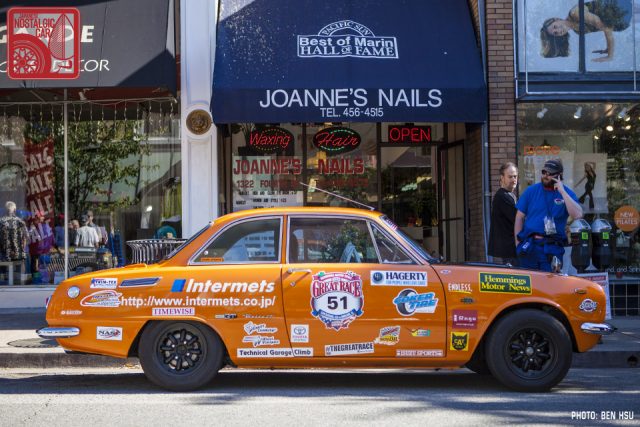 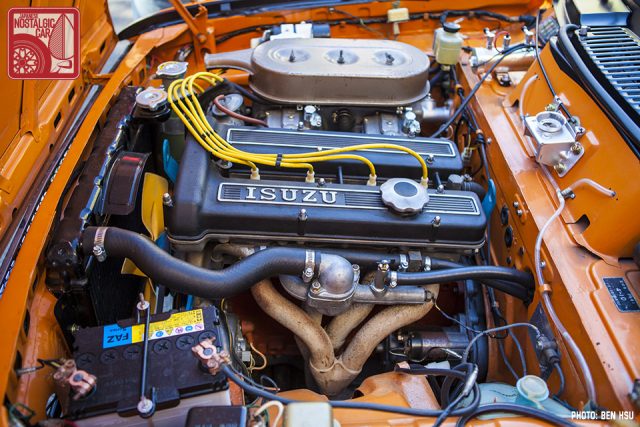 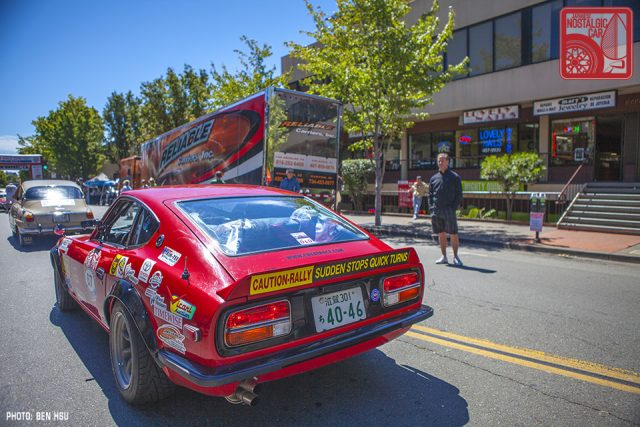 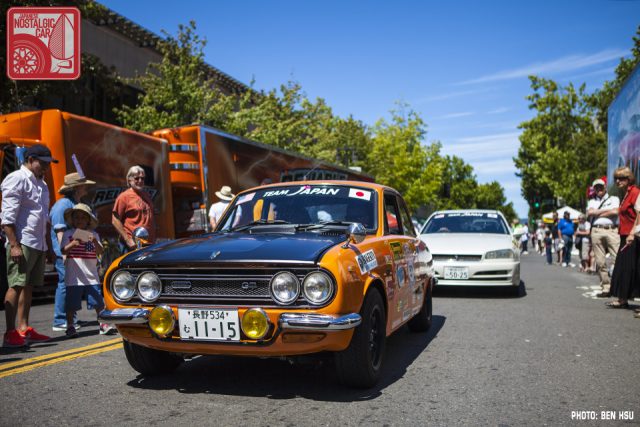 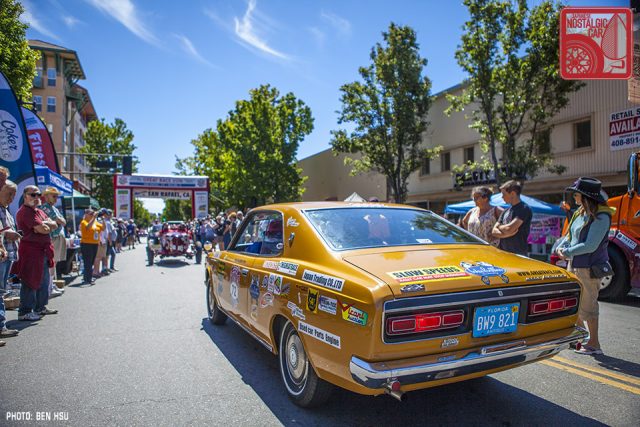 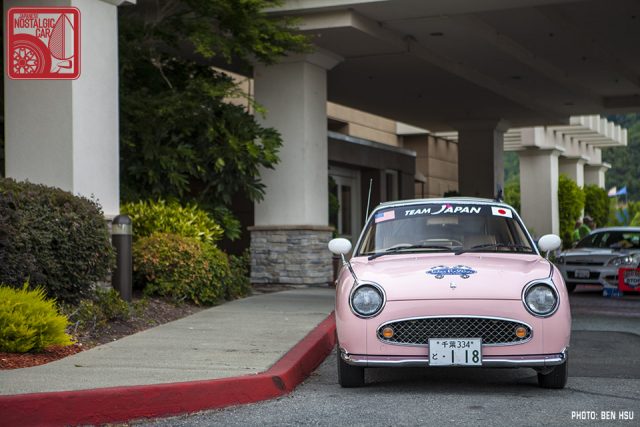 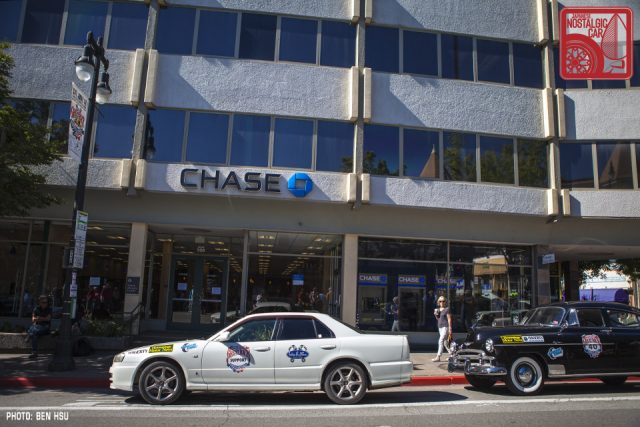 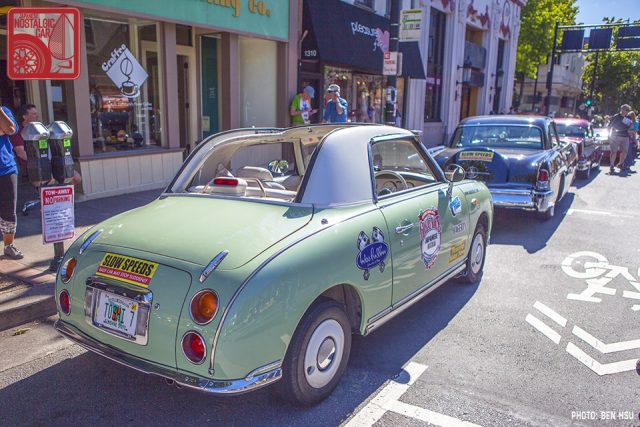 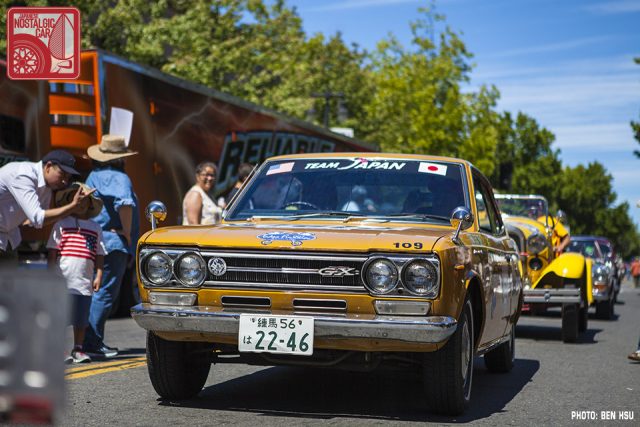