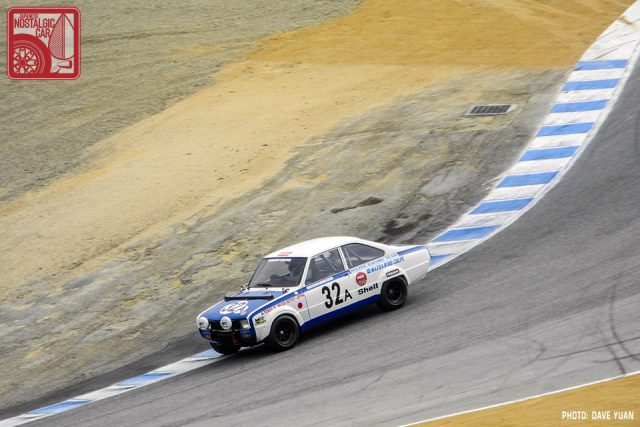 Racing is an extraordinary human endeavor. It encompasses brains and brawn, heroics at the individual and team levels, with huge amounts of synergy and coordination. And the machines are both technologically advanced and visually magnificent, catapulting us beyond our natural human abilities. For spectators, racing is an awe-inspiring assault on all senses. No wonder countless enthusiasts trace the seed of their passion to motorsport. The story here is one such example, in which 45 years separate the seed and the glorious fruit. 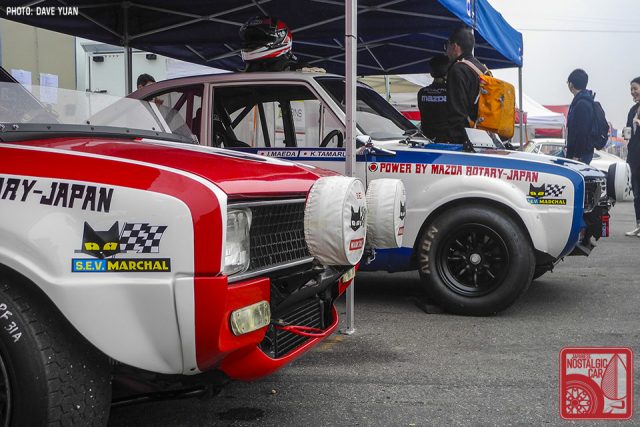 Recently, we witnessed a pair of classic Mazda rotaries take to the track at the Rolex Monterey Motorsports Reunion, tributes to the R100 race cars that ran at Spa-Francorchamps starting in the late 1960s. These cars had represented the European debut for Mazda’s second rotary race car, one they hoped would take the international stage by storm and change the world with its new engine. Unbeknownst to the team, however, a young enthusiast in Japan watched intently the filmed exploits of these “Little Giants” and vowed to one day race his own R100 at the famed Belgian circuit someday. 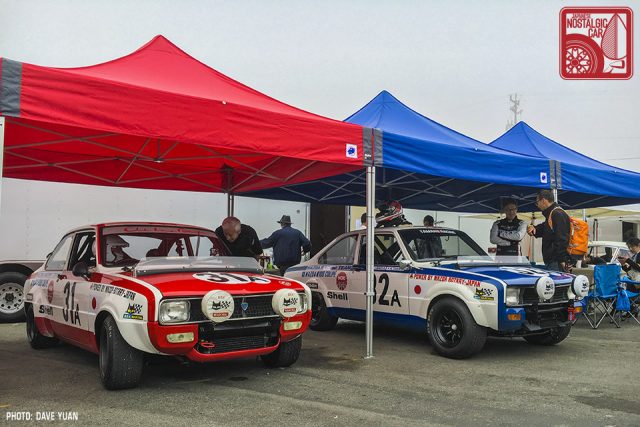 You can imagine our own sense of awe when we caught a glimpse of these historic Hiroshima homages poking out of their color-matched tents at the end of a pit lane at Mazda Raceway Laguna Seca. Even among the smorgasbord of beautiful vintage racers typical of the Motorsports Reunion, these cars stood out. 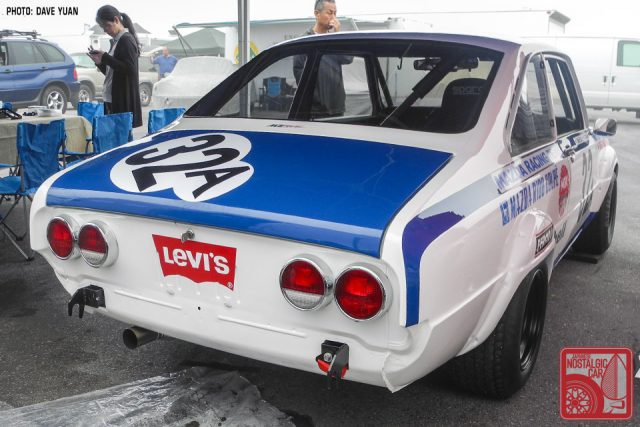 The build quality was absolutely stunning. The liveries, faithfully-reproduced sponsor decals, gorgeous SEV Marchal driving lights, houndstooth insert in the Recaro racing bucket, and just that little bit of patina on the rotary Mazda grille emblem, all astonishing. As tributes to an important part of Mazda’s—and Japan’s—racing heritage, these cars are jaw droppers. So how did they come into being? 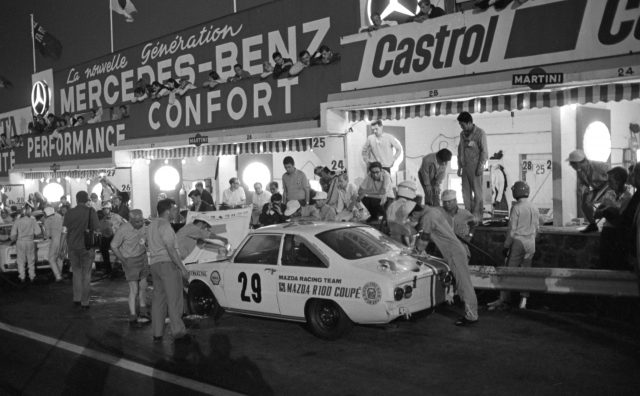 That young Japanese enthusiast who watched the R100s race at Spa was the then-23-year-old Hitoshi Kato. Already a car and racing enthusiast, Kato watched a 60mm film by Mazda Sports Corner — the Tokyo race shop central to Mazda’s early Le Mans challenges — on the R100s at Spa-Francorchamps. It was powerfully inspirational to him, the “Little Giants” taking on big sports cars at the famed international circuit. At the same time, it was heartbreaking watching three of the four cars break down and retire from the race, but the dream of racing his own R100 at Spa was thus born. 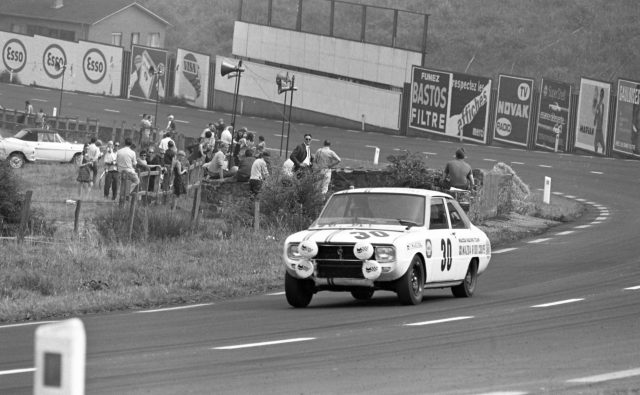 At that time, Kato-san was already a fan of the Familia Rotary. He’d gotten his motorsport start at the age of 20. However, the cost of racing was prohibitive to him at the time, and so participated in gymkhanas, building and tuning his car himself. Initially, he was partial to the Hino Contessa, but its weight was less than ideal for gymkhana. The new Familia Rotary Coupé, on the other hand, was light and nimble. Coupled with its saga at Spa, Kato was hooked. 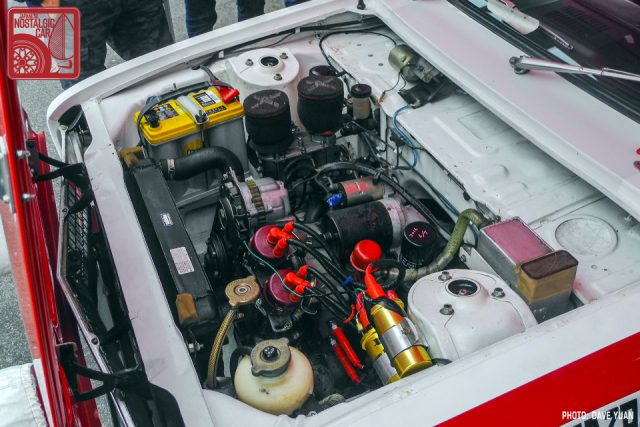 As we admired the cars and chatted with the team at Mazda Raceway Laguna Seca, numerous spectators passed by. Many asked if they were RX-2s or RX-3s. This belies the rarity of the R100. Think about it, when was the last time you saw one even at a show? Why is this so? To answer this question, we discussed the history of the Familia Rotary with Dr. Kato. It largely has to do with oil. 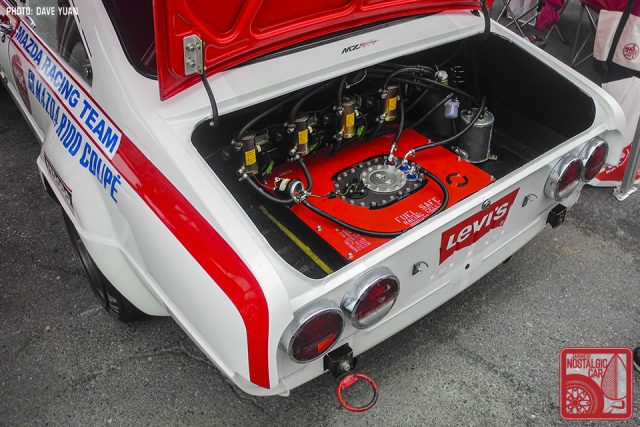 The Familia Rotary came out in 1968. The 10A, Mazda’s first generation production rotary engine, lagged in fuel efficiency compared to its competitors, but that mattered little when fuel was cheap. By 1973, however, the oil crisis had hit, and as a result popularity of the Familia Rotary summarily dropped.

Sales dipped, and existing cars quickly disappeared from the road… into junkyards. Dr. Kato vividly described how back in the post-oil crisis days, literal stacks of pristine Familia Rotarys were easily found in junkyards. Fortunately for the subsequent Savanna RX-3 — and to an extent, the Capella RX-2 — track rivalry with the Hakosuka Skyline brought those rotary Mazdas back into popularity and preservation. 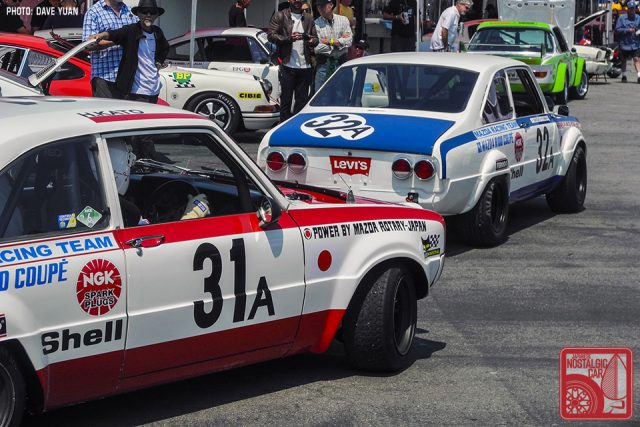 So now you may be lamenting those Japanese boneyards filled with pristine Familia Rotary Coupés stacked atop each other and what you would’ve taken home. In fact, this was exactly what the young Kato did. He began collecting parts for the Familia Rotary in the early ’70s and has built an incredible stock over the years.

Even more importantly, he has also written down and accumulated detailed technical information on how to build and tune them — 40-plus years of knowledge on the Familia Rotary — into an actual volume as thick as a textbook. Yes, Dr. Kato literally wrote the book on these cars! It is likely that he, with the knowledge in his head and in his book, is the world authority on the Mazda Familia Rotary. 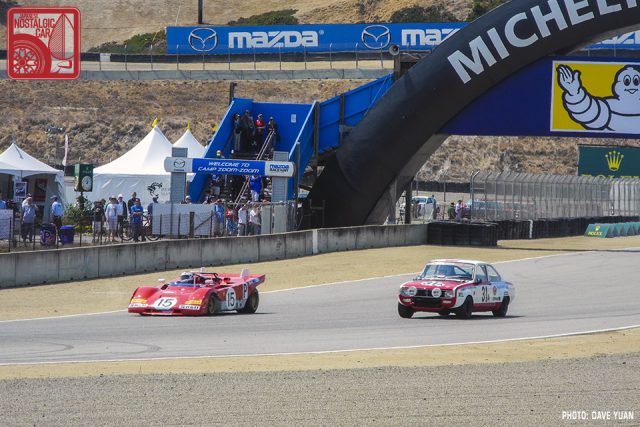 Using his wealth of knowledge and collection of parts, Kato-san was able to create his R100 race replicas. As mentioned earlier, the build quality is nothing less than top-notch. Details abound: the Marchal driving lights are genuine; the patina’d grille emblem on the red car can is so rare, even Kato-san couldn’t find another to affix to the blue car. 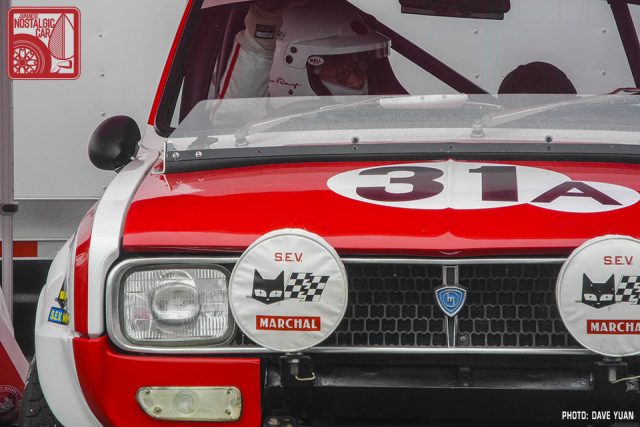 So far, he’s built three Familia Rotary/R100 vintage racers this way. He also owns an additional, more street-friendly example, one that he has had since 1984. He owns the red car at Monterey, numbered 31A for the Motorsports Reunion. The blue car, #32A, was built using Dr. Kato’s book and is owned by Katsunori Tamaru, a prominent figure in the vintage racing scene in Japan.

Dr. Kato’s impetus for building these R100 racers was to realize his Spa-Francorchamps dream. Its fulfillment proved 45 years in the making, as his pair of R100s raced in the Masters 70s Celebration as part of Spa 6 Hours in September 2015. The cars were prepared by RE Sugiyama, a rotary specialty shop in Dr. Kato’s hometown of Aichi. The companion to the red car was a green one (both profiled in MZ Racing’s videos below).

In fact, this was the car Dr. Kato drove at Spa, numbered 33 because that was the car that finished the 24-hour race back in 1970 (At Spa, his car was actually numbered 133). The red car, numbered 31 at Spa, was driven by none other than Ikuo Maeda, Mazda’s global Head of Design responsible for many of Mazda’s recent masterpieces such as the RX-VISION and ND Miata.

Of the Spa experience — which had full support of Mazda Belgium — Dr. Kato described it as simply, “very fantastic.” Of the circuit itself, he said the change in conditions throughout the day made it extremely dangerous. It would rain in the morning, then become sunny during the day. 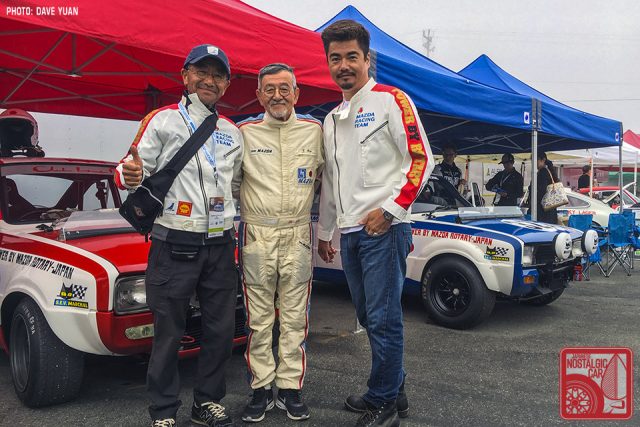 The race actually began with the circuit wet, with the downhill section tremendously fast. The cars competed against much faster opponents, but the team was there more for the fun and realization of Dr. Kato’s dream than an outright win against the locals. In the end, both cars finished, and the experience brought tears to Dr. Kato’s eyes.