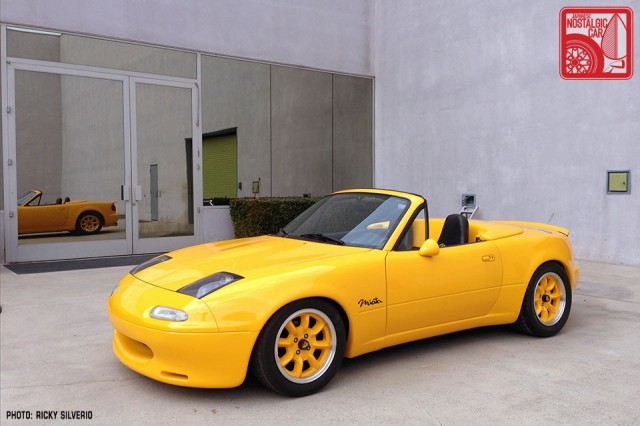 It’s highly unorthodox, at the debut of a new model, to also display a hot rod version painted in a yellow so loud it threatens to eclipse the supposed star of your show. This is especially true when the debut in question is for as important and high-profile a model as the Mazda MX-5 Miata. It’s like throwing a bikini-clad Kate Upton into the middle of a Mother of the Year ceremony.

But in fact, that is exactly what Mazda did 25 years ago with the 1989 Club Racer, an ur-Miata to give showgoers a peek at what trick mods were possible for their new sportster. However, the Club Racer is more than just a pretty face; it’s one of the only surviving pre-production NA Miatas, and a close look reveals a host of design details that never made it into production. 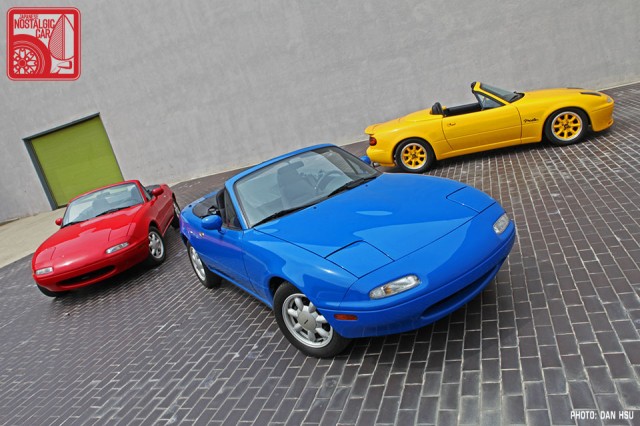 I first saw the Club Racer when it made the auto show rounds after its Chicago debut. As a certified Miata nut, I noticed several quirks that set it apart from the standard version, leading me to believe it was actually a pre-production prototype. 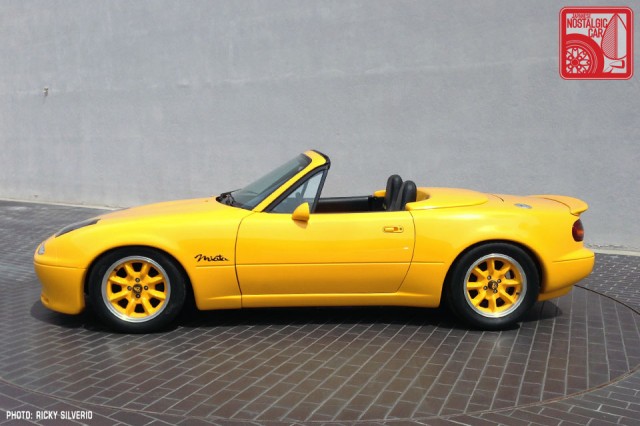 I saw it again in 1995 at a Sacramento Miata event, and while its minders had their heads turned I took it upon myself to pop the hood and do a little snooping. My suspicions were confirmed as quickly as I was told to step away from the vehicle. 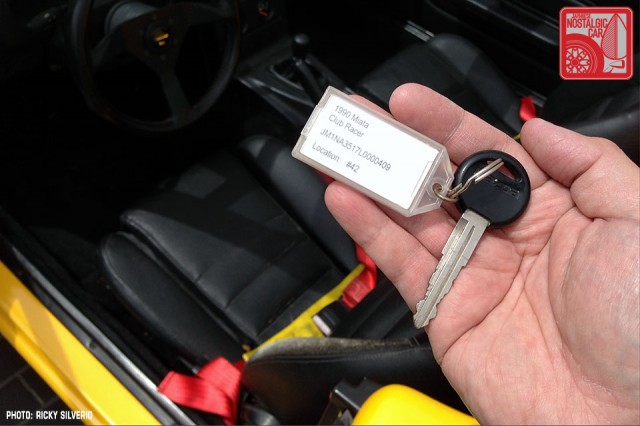 Mazda never mentioned anything about the car. They just showed a bunch of publicity photos. It wasn’t until this year, when we were at Mazda R&D headquarters documenting the three ultra-low-VIN production cars, that I was finally able to get my grubby paws all over it.

Clues to its production status were visible right there in the cockpit to anyone with a keen eye. And now, we finally have the opportunity to compare it, side by side, with not just a stock Miata, but one of the most stock NAs in the entire country, serial number 00015. Brace yourselves as we get into super otaku mode.

The most glaring difference shows up in the door panels. Originally, Mazda intended them to be much fancier, with heat stamp pattern called the “paperclip” internally. The window cranks also receives its own pattern, and the door handle is in an entirely different location.

Slipping behind the wheel, you’ll notice that the gauge clusters are subtly different. The production car adds a “headlight on” indicator, a cleaner oil pressure gauge, better kerning and a additional assorted markings.

Here’s an interesting aside: The steering wheel is a period late 80s MOMO Monte Carlo with red stitching, at a time when you could order them in myriad  colors and stitch patterns. A few years later Honda tuning house Spoon would commission another run of these as the very famous and equally pricey Spoon Sports MOMO steering wheel.

The Center console and coin holder are also slimmer in the production car. In fact, all the plastics in the Club Racer are smoother, with less molded grain, as is typical of prototype cars.

The cowl on the Club Racer has more vents that were removed when the car went to production.

The production Miata’s differential cover has more defined forms. Ignore the blue paint though; certain parts were colored at some point, likely as part of a display highlighting the Miata’s suspension. 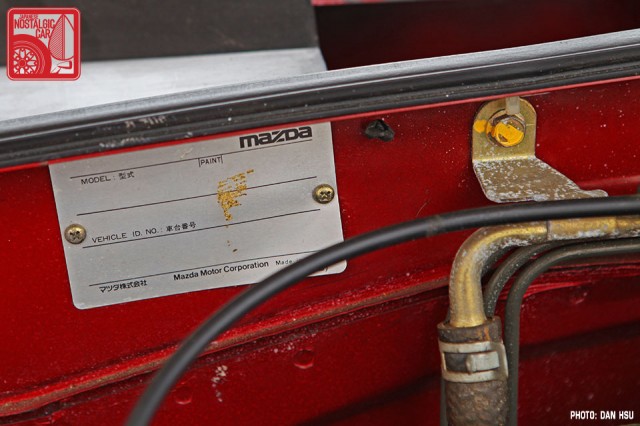 The real evidence, however, is beneath the hood that I peeked under almost 20 years ago. Most notably, there is no VIN stamped on the firewall. The VIN plate itself is screwed on and blank, and what’s more, the pre-production car began life in red!

What’s more, the front engine cover is from that of a Mazda 323 GTX of that era. In fact, as I recall even the valve cover was the GTX’s ribbed one, but it must have gotten swapped somewhere along the way.

Looking at number 15 and the Club Racer side by side, you can see the evolution taking place. Each pre-pro part had a sticker declaring “SAMPLE” on it. Everything in the engine bay is just a bit cruder, from hoses to housings to its primitive exhaust shield. To hold its fixed headlights in place, there is — and this is an official term used in advanced automotive engineering — a block of wood. 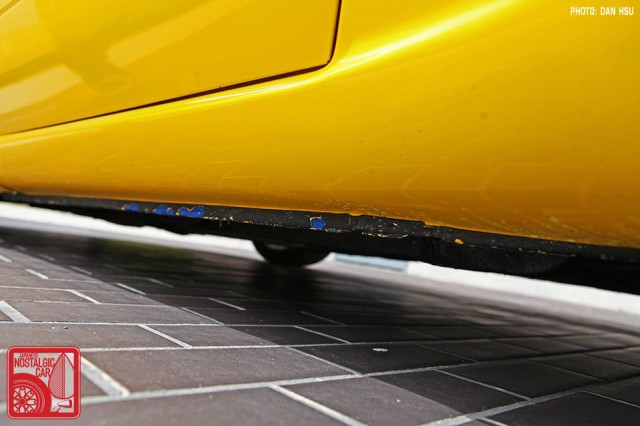 In our scrutiny of the Club Racer’s ever detail, we noticed one more thing that has probably never been discovered. Before it was yellow, it was blue. Perhaps it was used as a color test, or maybe the original spec for the show car was an intense azure rather than solar flare. There are a few more secrets we discovered but we’d have to kill you if we told you. 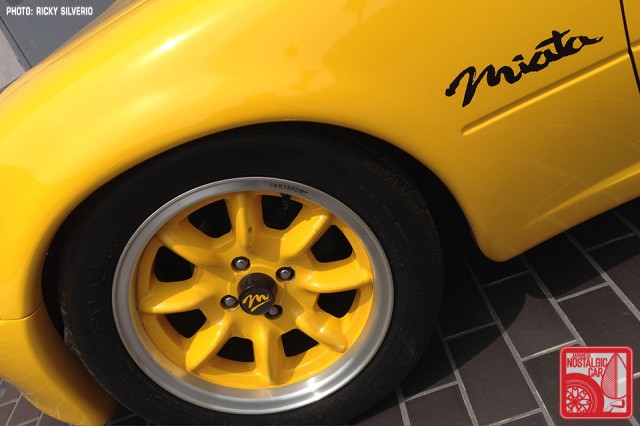 In the end, we feel that the final guise was appropriate. Japanese tuning styles had not yet been accepted in mainstream America yet, so what you see is a very American interpretation of what a Miata street machine would be. Rod Millen later built one very similar to this, sans flares but just as yellow, to serve as his turbo Miata demo car. 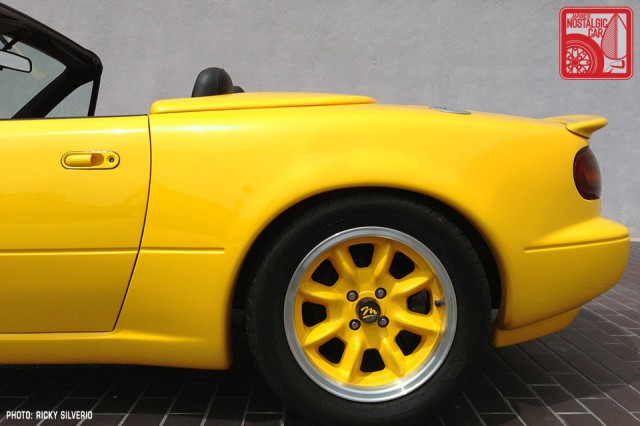 Finished in a bright pearl yellow emblematic of the early 90s, it’s a snapshot of tuning styles the time. It still rides on the same 15-inch Panasports (painted yellow to match, of course) and Yokohama AVS tires (205/50 R15 front, 255/45 R15 rear) from 25 years ago. An aero-fied body with flared fenders, integrated skirts, Vitaloni Sebring mirrors and ridiculously heavy fiberglass spoiler give it that smoothed out look that was so popular at the time. 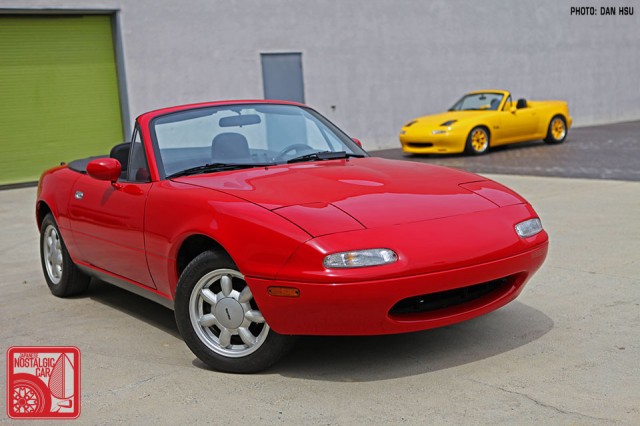 In any case, Mazda made a bold move to put the show stealer next to its production car. Except, it didn’t really steal the show. A quarter century on, it is the original production car that’s revered throughout the auto-verse while the outrageous street machine is largely forgotten. Perhaps it’s because the Club Racer was too “of its moment” and, like all trends, looks dated after 25 years. Or perhaps the explanation is simpler. Mazda’s zoomy little sports car, unadorned and basic as it was, is just that damn good.

permalink.
This post is filed under: profiles and
tagged: Club Racer, mazda, mx-5.