What we learned from seeing the production Nissan Z in person 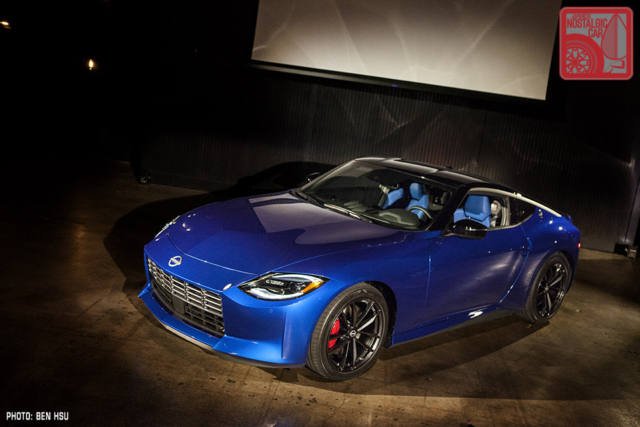 We recently got the chance to see the new production Nissan Z in person. Nissan let us pop the hood, sit in the car, talk to its chief engineer — everything short of drive it. But despite the lack of road time, we learned many new things that are impossible to glean from simply judging it by its photos. And for the first time in many years, it feels like Nissan has finally listened to enthusiasts. 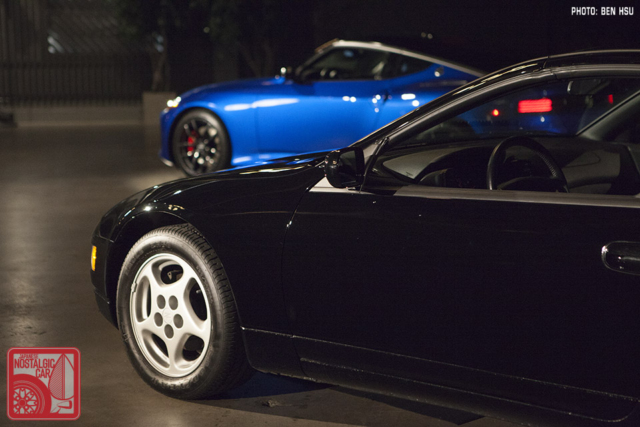 To show the new Z, Nissan brought out some cars from their US Heritage Collection. There was a 370Z NISMO and a Datsun 240Z, but those were left outside the building. The car Nissan chose to actually display the Z with was the fourth-generation twin-turbo 300ZX. Now, Nissan might have had some logistical reason for that, but we think the Z32 is the appropriate choice here. Out of all the cars in the Z’s long history, it’s this that seems to be the new Z’s spiritual predecessor. 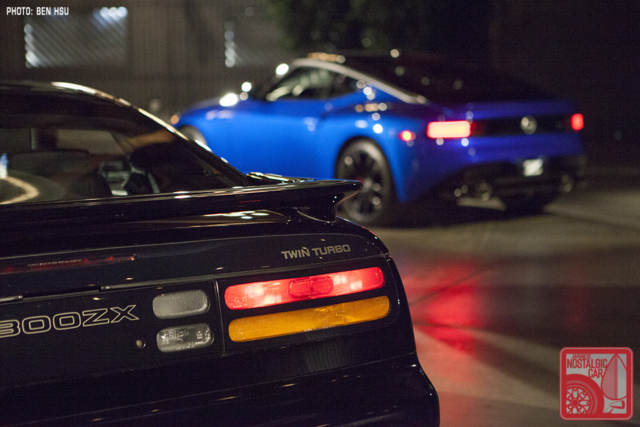 It’s not simply because both cars feature a twin-turbo V6 and can be optioned with a manual transmission. Both have sleek styling that belie their weight and size. Both are more grand tourers than a pure old school sports car like the 240Z. Nissan will never be able to build a 240Z again due to modern safety regulations, but an expressway-eating powerhouse like the Z32? That’s what the new Z feels like. 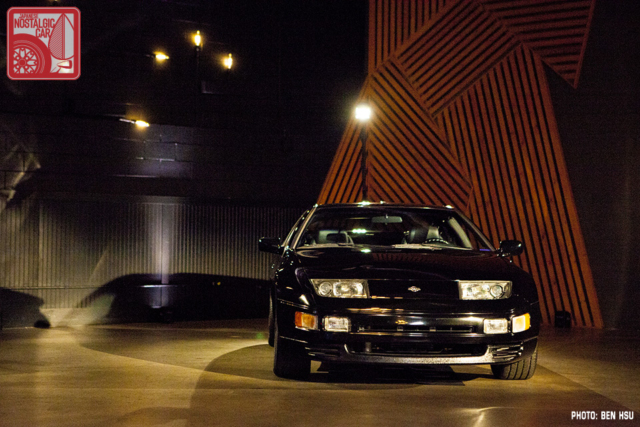 When we drove Nissan’s almost-new 1996 300ZX Twin Turbo (the exact car on display here, in fact) for our 25 Year Club story, it was a revelation. It was brand new, with fewer than 200 miles on the odometer, a far cry from the overly modified and clapped out examples we were used to seeing. We learned that despite its complexity, mass, and size, the Z32 was still a captivating driver’s car. 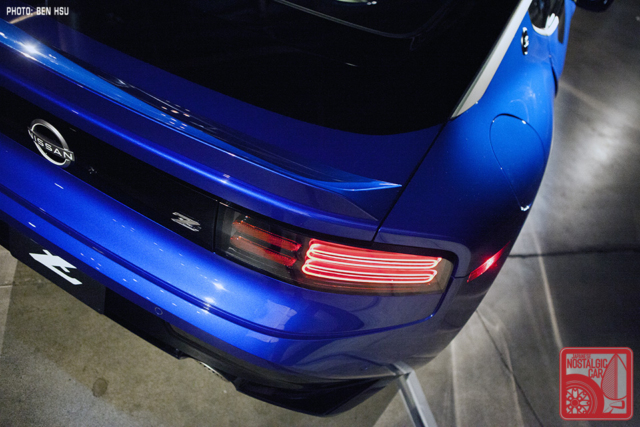 It could handle, was fast as blazes, and catapulted the Z line in to the modern age. A 240Z can better thread a canyon hairpin, but a Z32 TT can charge down interstates all day, ace sweepers at triple-digit speeds without breaking a sweat, and still shepherd its occupants in perfect climate-controlled serenity along the way. We don’t know if the new Z will do the same, but we have no reason to believe otherwise. The Z32-inspired rear end may have been a design flourish, but the link to the fourth-gen Z may run deeper than the sheetmetal. 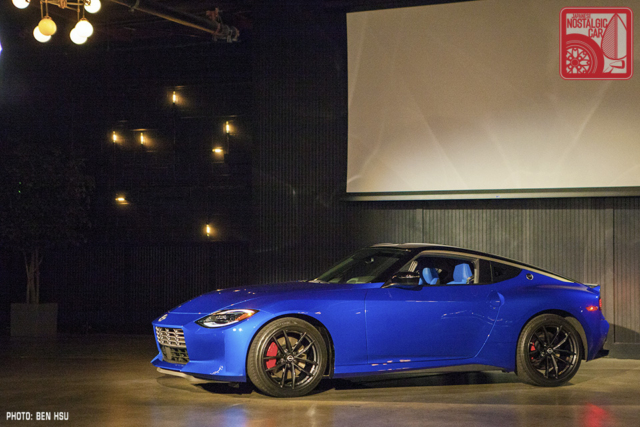 The new Z, which we’ll call the Z34B for simplicity’s sake, pulls no punches in the styling department. Nissan’s head of sports car development Hiroshi Tamura, a former Z owner himself, explained that he wanted people on the street to get a sense of “déjà vu” when they saw the new car. The Z34B accomplishes that, and we think even bystanders who don’t memorize engine codes and torque figures will get a sense of Z-ness when they see one blow past. 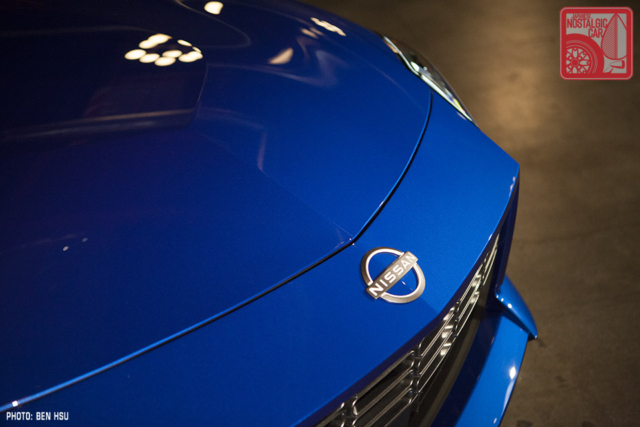 There’s obvious cues like the headlights, the chevron hood bulge, and the crease down the center line of the hood. At some angles, it almost could be mistaken for an S30 Z. However, Tamura-san pointed out some more subtle design cues as well. 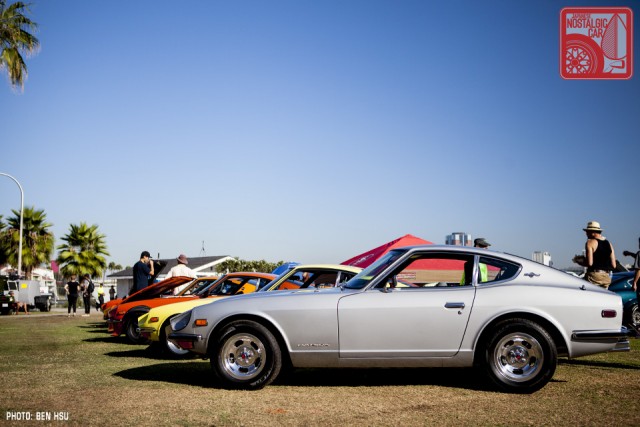 For example, when viewed from the side, most sports cars assert a wedge shape with a low nose expanding to a high tail. Nissan, on the other hand, took great care to pen a downward progression on the Z. The character line crests at the front wheel arch and slopes down toward the rear wheel. 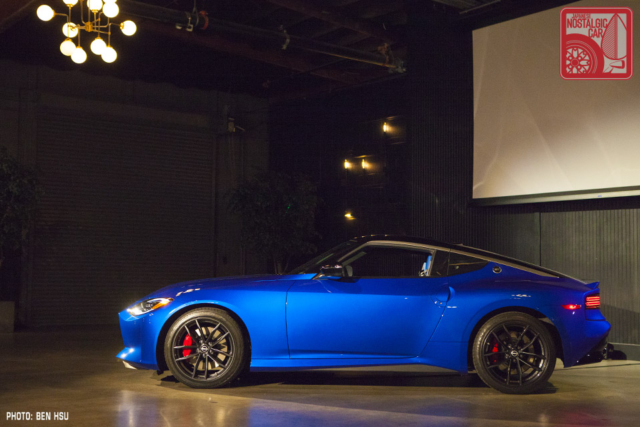 Meanwhile, the rocker panel kicks upward. Both lines then expand outward sharply, evoking what Tamura-san describes a “a kind of venturi effect.” The roofline also ends very far back, and the combined curves stir up memories of the 240Z. The upshot of all this is that the silhouette emphasizes the rear-wheel-drive layout of the Z. Despite the same wheelbase, width and height, the car looks much wider and lower than the 370Z. 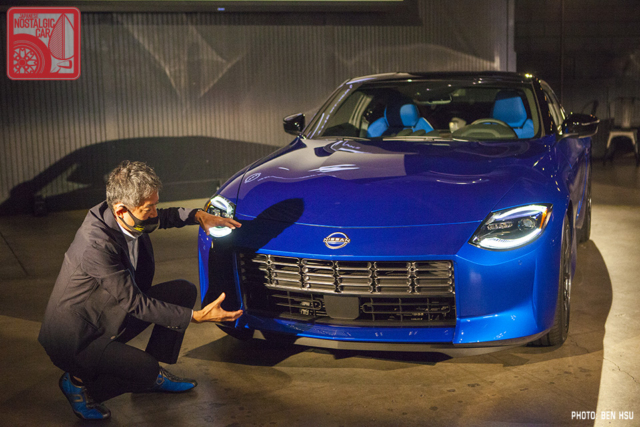 In front, perhaps what was the greatest flaw of the Z Proto has been addressed. The top half of the grille now features chrome highlights to break up the Z Proto’s gaping maw intake. The grille was always there, it was just painted black on the Z Proto. Tamura-san confirmed that Nissan made the change in direct response to fans’ criticism of the front view. 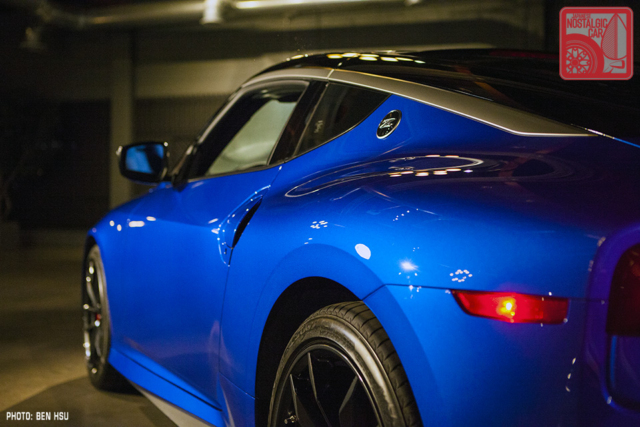 The large front opening is actually necessary for cooling the radiator and oil coolers; none of it is fake or filled-in like on the Honda Civic Type R or Toyota Supra. Tamura-san also revealed that the rear of the body has new reinforcements. “Parts of the design look like carryovers [from the 370Z], but it’s all new stamping,” he told us.

Obviously, a production version needs some changes from the concept to make the car livable in the real world. Things you didn’t see on the concept include a large fuel door, side marker lights, and a more pronounced door handle. Overall, though, the car looks amazingly faithful to the Z Proto unveiled last year. 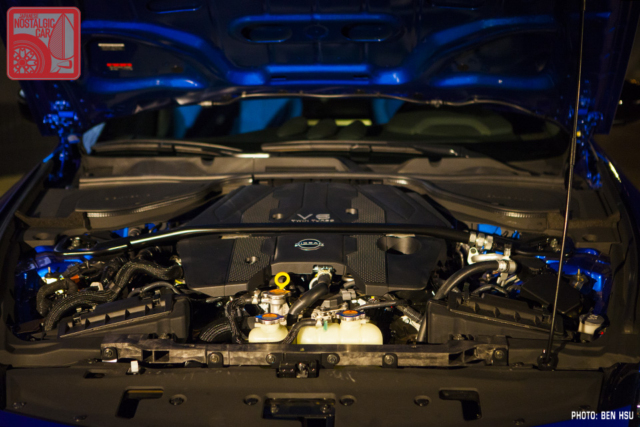 Under the hood is indeed the VR30DDTT twin-turbo V6 from the Infiniti Q50 Red Sport 400. It cranks out 400 horsepower at 6400 rpm and 350 lb⋅ft across a broad peak torque band that begins at just 1600 rpm and stretches all the way to 5200 rpm. We’re excited to see what this engine can do with a manual transmission behind it. 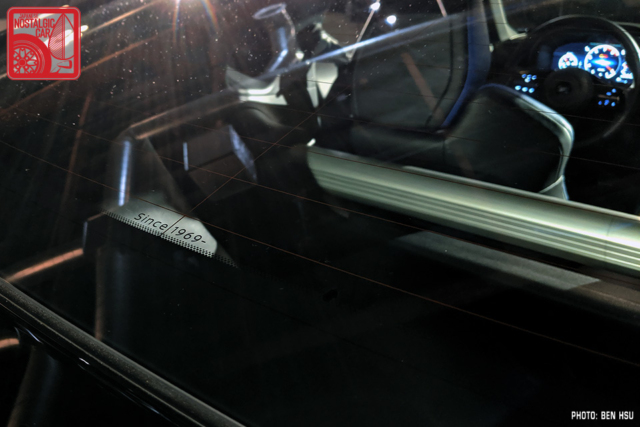 The production version lost the Z logo easter egg in the headlights, something to do with a safety rule and disrupting the beam. We’re glad to see the small “Since 1969” in the rear glass text did make it into production, though. The dash after “1969” is still unnecessary and bothersome from a pedantic writer’s point of view, but we’ll let it slide. 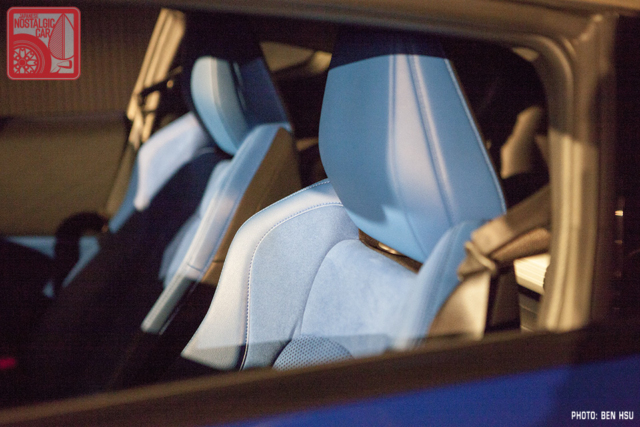 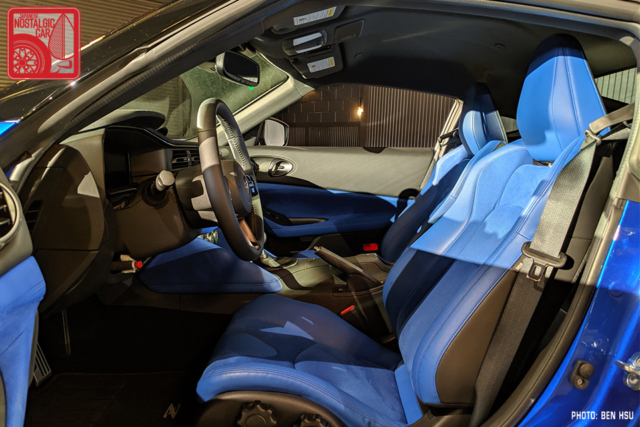 Sitting inside the Z34B is a familiar experience. Like in Zs that have come before it dating back to the S30, you sit very low to the floor. The car cocoons around you, giving you the sensation of piloting a torpedo boat. Bits like the vents, door handles, and window switches are practically identical to the 370Z’s. The plus side is that it still uses a handbrake located on the center console. Speaking of which, we neglected to take a photo of it, but the arm rest and cubby hole look much cleaner now. 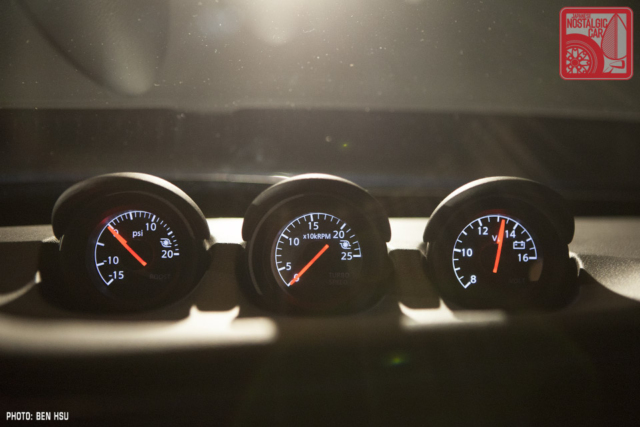 The traditional trio of gauge pods remain atop the dash. In the newest configuration, they show boost pressure, turbine speed, and battery voltage. Below them sits a completely modernized center stack with a large touchscreen to control many of the car’s functions. Climate controls are still located on distinct dials. 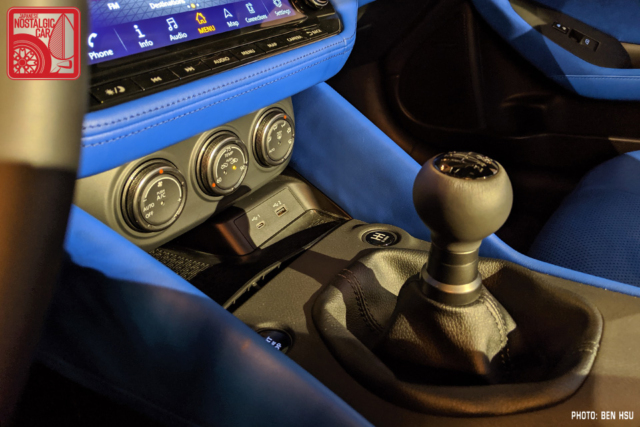 The 6-speed manual transmission feels absolutely sublime so far. The shifter requires a slight increase in pressure to enter each gate initially, but once you push through it it glides into place with a satisfying snick. Tamura-san calls it a “mountain-valley” effort feel and we dig it. It’s an old school stand against the too-soft shifters found in modern manual gearboxes. We weren’t able drive the car so we can’t report on the clutch feel, but we hope it has a similar level of resistance. 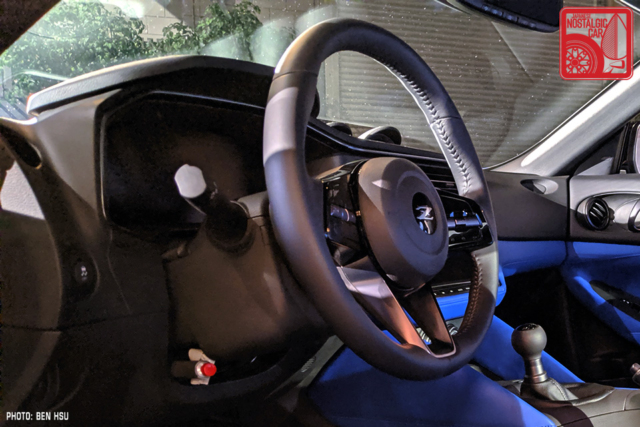 Another brilliant tactile detail can be found in the steering wheel. It’s not the fat tube often equipped in modern sporty cars, but it has an oblong cross-section that is easy to grip and nudges your hands into a comfortable resting angle. Tamura-san says that the shape is very close to, but not quite, that of the steering wheel in an R32 Skyline GT-R. He owns a tuned R32 himself, and hopes that the steering wheel will make many Nissan owners in Japan feel instantly at home when they put their hands on it. 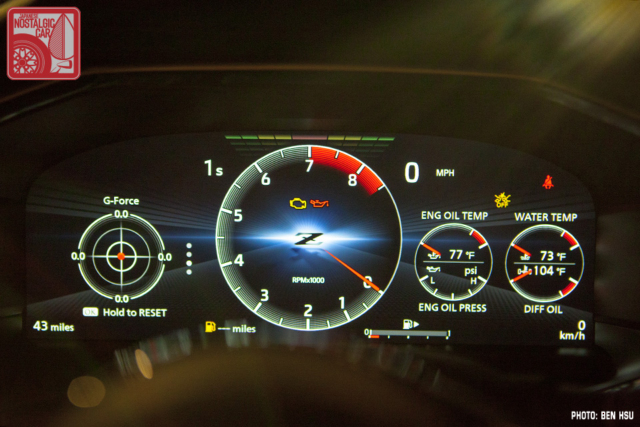 The instrument cluster is all-digital now, and can display three modes, each with a different information focus. One called Enhanced, for example, uses most of the screen area to display a navigation map. We like Sport the best, which not only makes the tachometer the focus but orients redline at top dead center so that it’s closer to the driver’s line of vision.

Nissan SuperGT driver Tsugio Matsuda helped design the layout, in particular insisting that the shift light (the thin bar above the tach) begin on both left and right sides and converge in the middle with the tach needle as you approach redline. It’s a subtle design change from a left-to-right shift light that saves a split second of brain processing when you’re giving it the full beans. 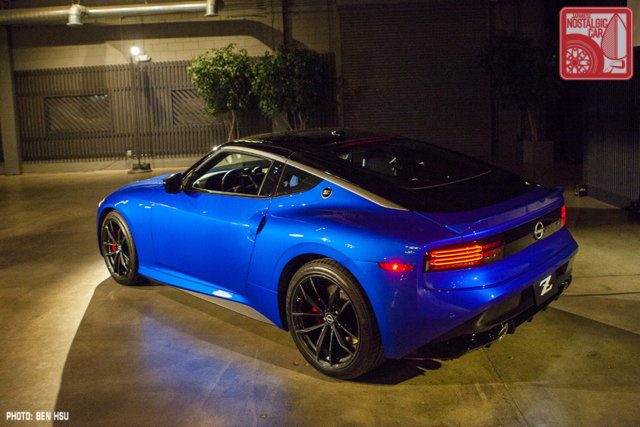 It’s hard to believe, but the Z32 is already over 30 years old. That means the Z34B is further away from the Z32 than the Z32 was from the 240Z when it debuted in 1990. We’ll have to wait until we drive it to determine whether it’s truly a good car, but what we’ve seen so far is promising. We can’t expect Nissan to recreate the 240Z, but if the Z34B manages to conjure the feeling of a now-classic, 31-year-old twin-turbo 300ZX when we get a turn behind the wheel, we’ll consider that a success. 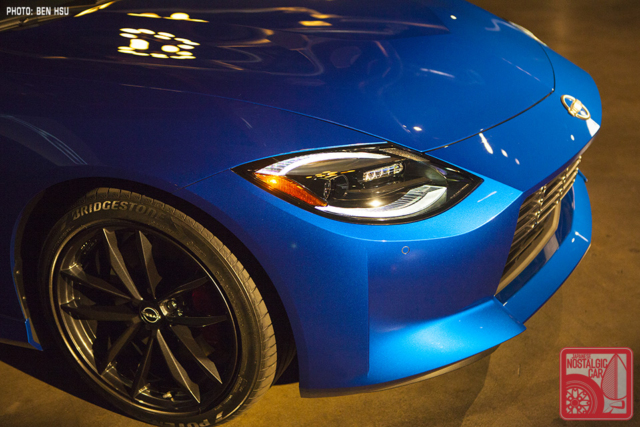 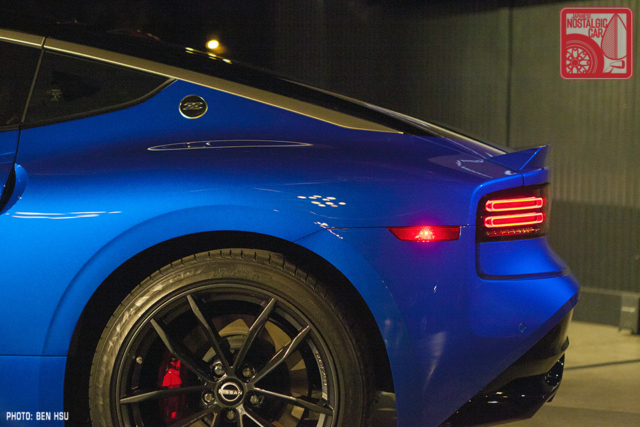 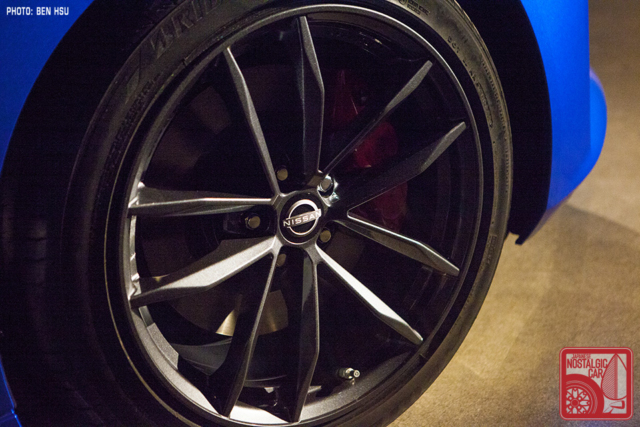 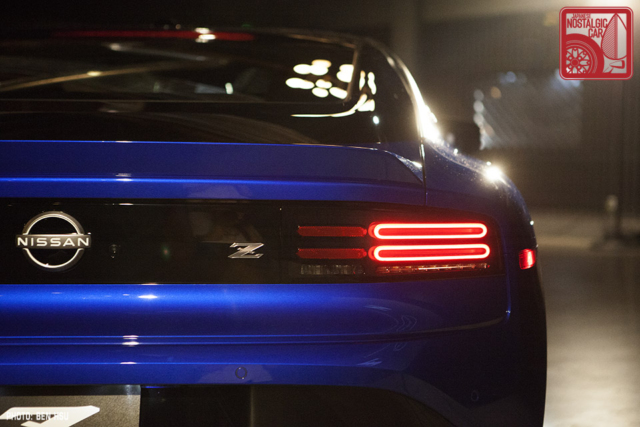 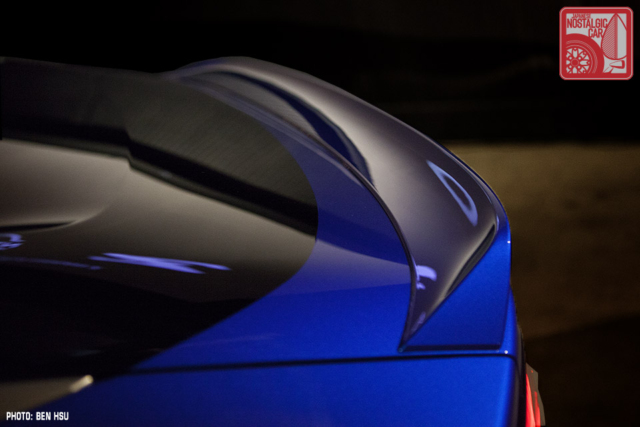 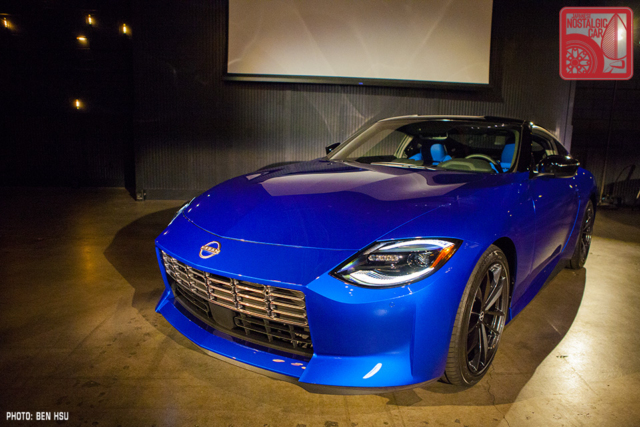 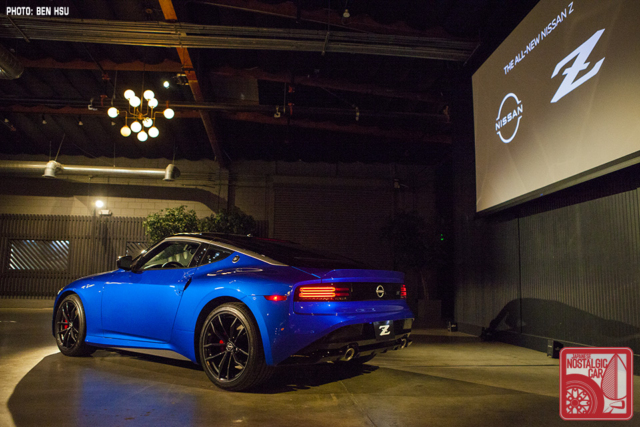 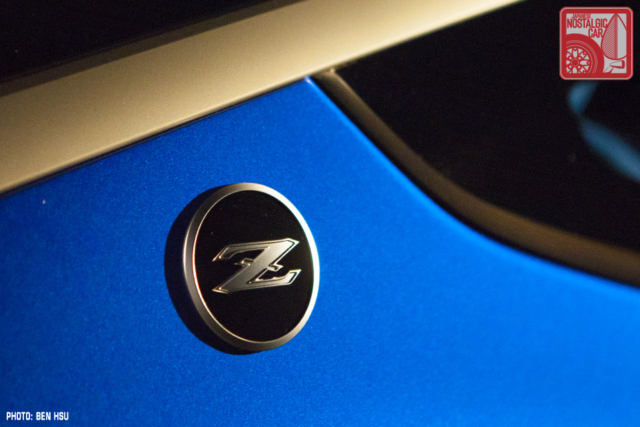 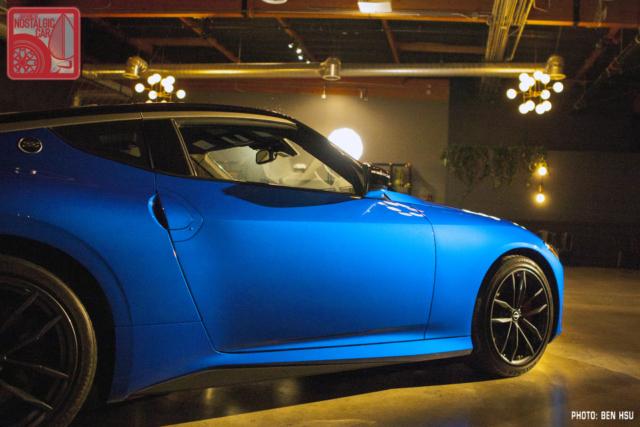