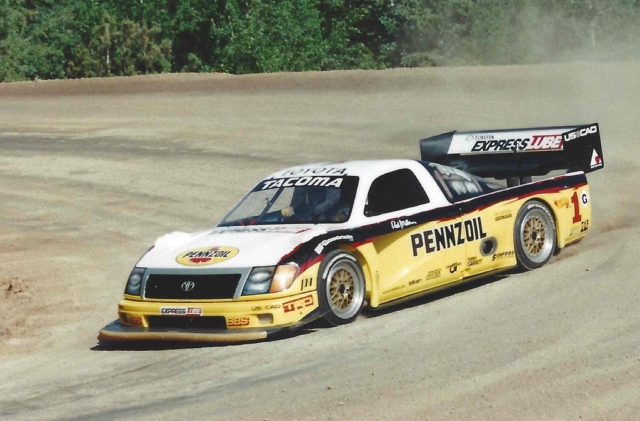 Over the weekend the 100th running of the Pikes Peak International Hill Climb took place. The event was marked by rain and dense fog, conditions that shattered any chance of drivers setting new records. One driver that didn’t need to prove anything was Rod Millen, who brought the historic Pikes Peak Tacoma out of retirement for another run up one of the tallest mountains in the Rockies.

The PPIHC still has an Unlimited class, in which any type of build is eligible as long as it’s safe. As a result it hosts insane, one-off cars that would not be fit to race in any other series with many giving off a distinctly shed-built vibe. The venue is so unlike any other course too, with 156 turns in 12.42 miles ascending to 14,115 feet above sea level, that the machines built for this singular purpose take on a unique aura you don’t see in any other form of motorsport.

The Pikes Peak Tacoma was successor to Millen’s equally radical Pikes Peak Celica, with which he won the hillclimb with in 1994, 1996, and 1997. In its first outing the car set a record of 10:04:06, which remained unbroken until Nobuhiro “Monster” Tajima came along with a Suzuki XL7, itself a successor to the Pikes Peak Escudo, in 2007.

By all accounts, the Tacoma was even faster than the Celica. Built around a 2.1-liter TRD-built IMSA 503E turbo four, it made anywhere from 750 to 1,000 horsepower depending on altitude, with some sea-level tests exceeding the four-digit mark. Mid-mounted in a tubular frame, power was sent through a transfer case to all four wheels. Equipped with a giant wing and venturi tunnels between the carbon-fiber, NACA-ducted body and undercarriage, it produced 2,000 pounds of downforce at 100 mph. With a total weight of 1,950 pounds, it could in theory drive upside down, once it rocketed from 0-100 mph, which took just 4.9 seconds… on dirt.

Millen won both the 1998 and 1999 Pikes Peak hill climbs in this beast, which clocked a time of 10:11.15 in 1999. It was so epic, Hot Wheels even immortalized the car in diecast form at a time when the toy brand had little to no interest in Japanese cars. Automotive photographer Larry Chen caught up with the now 71-year-old Millen as he prepped the legendary car ahead of the event.

The last time the Tacoma ran at Pike Peak, the course was still dirt. Now with a fully paved route Millen believes the Tacoma to be an 8-minute car. Unfortunately, this year’s severe weather prevented him from giving it the full beans. Millen also admitted that he was somewhat out of practice. Nevertheless, his time of 11:06.15, meaning this 25-year-old machine came in 8th overall.

Watching Millen wrestle the car into submission over the entire climb and seeing the Tacoma emerge from retirement to conquer the mountain once again is like watching Tom Cruise or Keanu Reeves, both nearly 60 years old, kick ass in an action movie. It just never gets old.