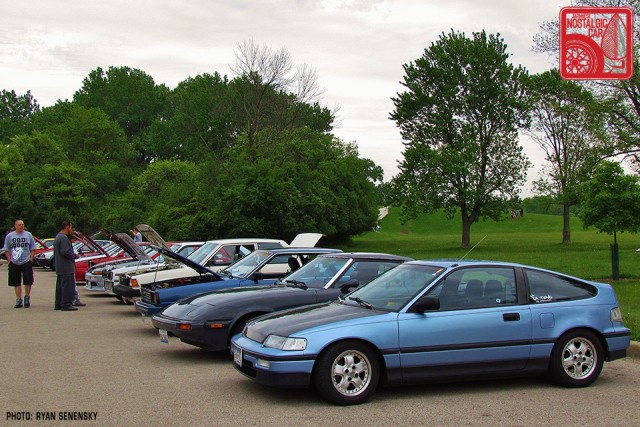 Rarely do we feature events from the great Northern Midwest but being invited to Team_Nostalgic’s Old School Love, New School Flavor show in Chicago meant leaving my humble Minneapolis abode at 3:30 am on the day of the event. It was 400 miles to Chicago, we had a full tank of gas, half a pack of cigarettes, it was dark… and we were wearing sunglasses. Though we got out of town in record time, almost immediately after entering the state of Wisconsin a monsoon began. The rain was falling faster than the wipers on my CRX could keep up, and it continued through the whole state, probably a foreign concept for our California readers. I don’t believe that JNC owners are afraid of rain, but it was looking like this would become the Old School Love, New School Flavor Boat Show. 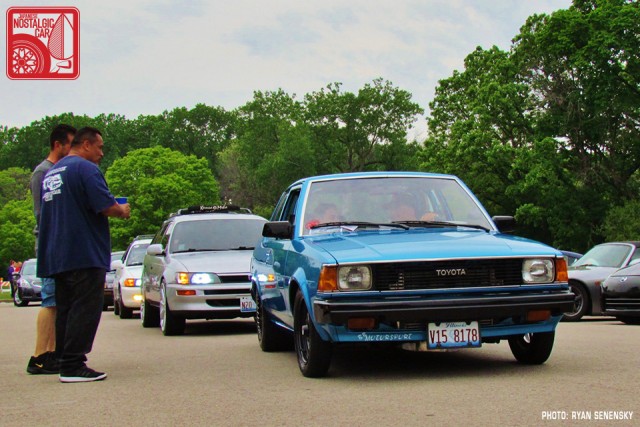 Luckily, the rain let up just as we pulled into the city of Chicago, only returning for about an hour midway through the show. For the rest of the time, the sounds of mambo and reggaeton accompanied the sweet smell of BBQ. Orlando Lespier and Team_Nostalgic welcomed us with open arms in Schiller Park. Needless to say, the core members of the club had gone to great lengths to ensure organization was on point, sparing no expense with trophies, food and staff. The result was a very well organized meet and it went off without a hitch.

The turnout of the show was simply spectacular, and the quality of cars varied from daily driven to feature quality.  The midwest JNC community is much like that of the east coast meaning the Puerto Rican community and their unique style of building cars is well represented in Chicago. If it wasn’t a rotary it was almost certainly a Toyota, which this first installment will focus on, and nobody was afraid of chrome.

Speaking of East Coast style, images of KP61 Starlets with tubbed out rear ends wheeling down a quarter mile are often of the first images that come to mind. Surprisingly only a single KP61 Starlet was in attendance. However it did come with a cross-platform Nissan SR20 swap and a healthy sized turbocharger under the hood, so yes, there is truth to that stereotype. Running exponentially more power than factory on a set of factory sized wheels with a chassis this short must be sketchy at high speeds, but being able to blow the doors off of most modern muscle cars probably makes it all worth it.

The E70 chassis Corolla is one of the most popular Japanese Nostalgic Cars around these days, sharing a lot of the AE86’s aftermarket but without the drift tax. Plenty showed up in various states of completion, from unrestored to track-ready. Drag racing has always been a popular use for E70s and the influence is readily apparent from the skinny front tires on so many of them. 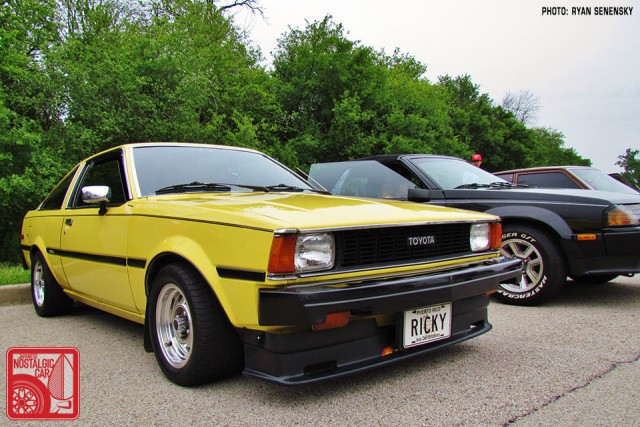 Surprisingly only a handful of sport coupes showed up, one of them notably featured a Puerto Rican vanity plate, either hinting that this car was brought over from the island or that the owner hailed from it. What I find most amazing is that here in the Midwest we cake our roads with salt, and to find this many 30-plus-year-old Corollas in such condition is astonishing. 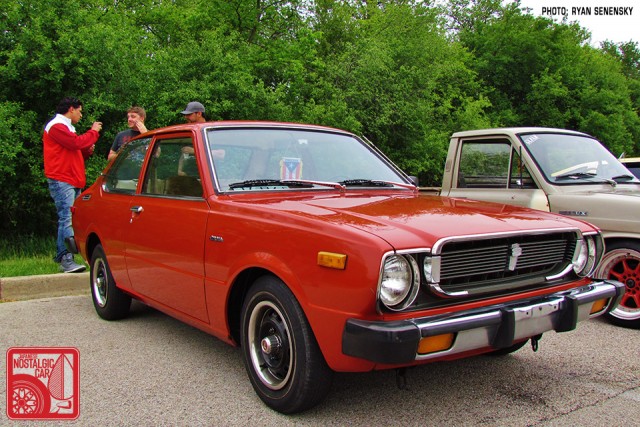 E70s were not the oldest Corollas in show. There was even an E30 chassis in unmolested condition. As much as I can’t leave my cars alone, I rest easy knowing that there are people out there with factory examples such as this. It was beautifully complete, all the way to the USDM Rubber stopper clad safety bumpers.

Drift Tax or not, AE86 builds were also in full effect, ranging from Orlando’s immaculate white one to projects not yet completed. Of the AE86s, all were surprisingly really well done; you couldn’t pay to find a rusted out example or even a drift missile. The masses of AE86s held a few builds that really stuck out to me, including twin AE86s with 20-valve swaps and Orlando’s immaculate 4A-GZE-swapped hatch with JDM bumpers and Work Equips.

A black 20-valve coupe rocked a wild, Hokusai-inspired hood. I’ve always loved the Great Wave of Kanagawa and wanted to vinyl-wrap it onto a hood of a car. To the owner, congrats on your fine taste in 1830s Japanese art. 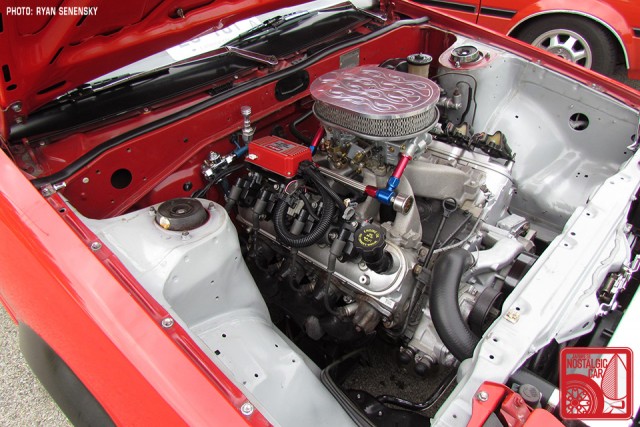 Although these swaps are not really my thing, Javier’s carbureted LS swapped AE86 was very well done. Generally an LS swapped import features rat’s nest wiring and shoddy body work but this was completely devoid of any of that mess. Personally, I think a low rise intake manifold and smaller air cleaner make this swap an awesome sleeper, but the shaker style hole in the hood is a pretty cool sight to see. 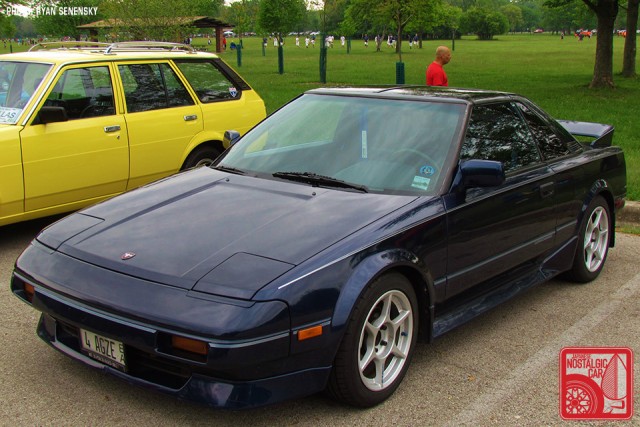 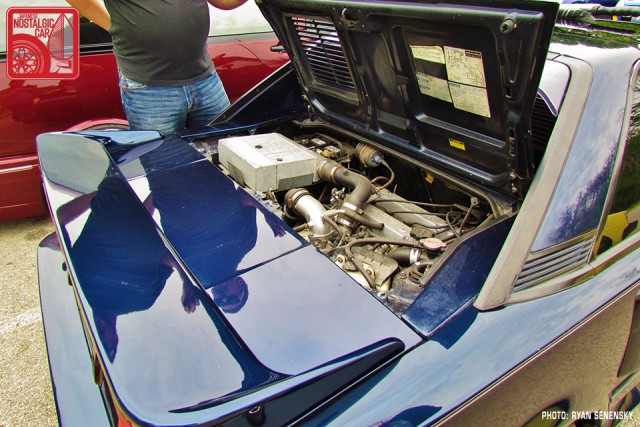 The only AW11 MR2 in the show was owned by Kevin Kovak and it was a very good example of the chassis, a supercharged model on a very meaty fitment of Kosei K1s. I was surprised to not see as many of these, as in Minnesota you can’t go to a show without seeing at least a few of A-Dubs. Kevin revealed that the car isn’t a show queen and is regularly autocrossed. These cars have really been going up in value after taking second place to the AE86 for the majority of it’s lifetime.

There was even a lone T40 Corona owned by Pito Torres at show as well. The body was absolutely flawless graced with some era-correct 70s chrome wheels. I was lucky to get a shot of the rear suspension, as its setup could make a very capable street car if the owner was inclined towards some competitive driving in an industrial park on the South Side.

Arriving a few hours in was not one but two Toyota Carinas, which mark the first and second ones I’ve seen in person. Personally, I prefer the smaller wheels over the big chrome ones but they’re still both gorgeous cars. I love the juxtaposition of the stock 3T-U engine with chrome parts and the 4A-GE swap that is mostly stock. 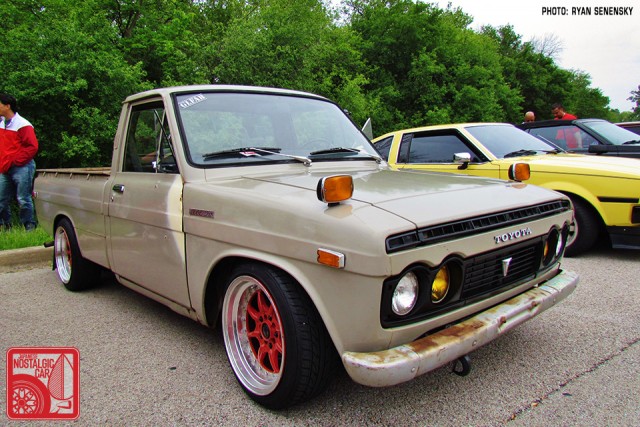 Speaking of rare sights, any Toyota pickup made prior to the 90s is quickly becoming extinct. Rust has taken the majority of the examples here and those that can be saved have mostly become off-road wheelers. However, a handful still exist in mostly stock guise. This RN10 Hilux was wearing a beautiful rust-free patina. Generally I like restoration projects but it’s only original once and this is honestly a truck I’d leave unrestored. For me, one of the most exciting parts of the truck was the fact that its original katakana “To-Yo-Ta” logo mudflaps were still in tact.

Wagons. Everyone these days seems to love them. There was definitely no shortage of longroofs, most of the E70 chassis variety even some of the AE102 generation in great JDM guise. I’m saving a few wagons from other makes for the next part, which were fantastic as well. I won’t lie: after this show, the AE102 has come into my mind as a possible replacement for my CRX as a daily driver. The poor yellow E70 turbo wagon seemed to have some cooling issues and appeared to be signaling a tow truck via indian smoke signals. I hope everything worked out for him and it wasn’t a major issue. 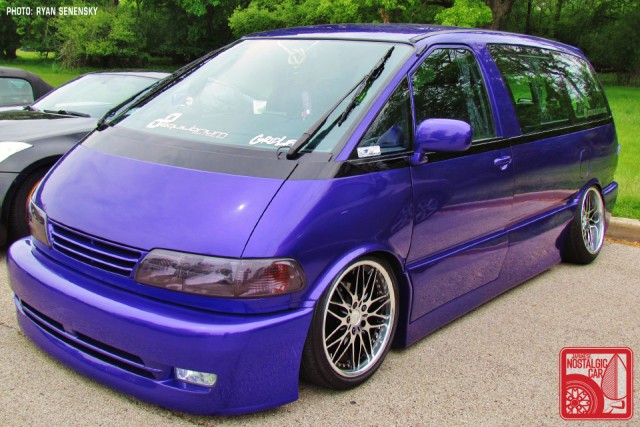 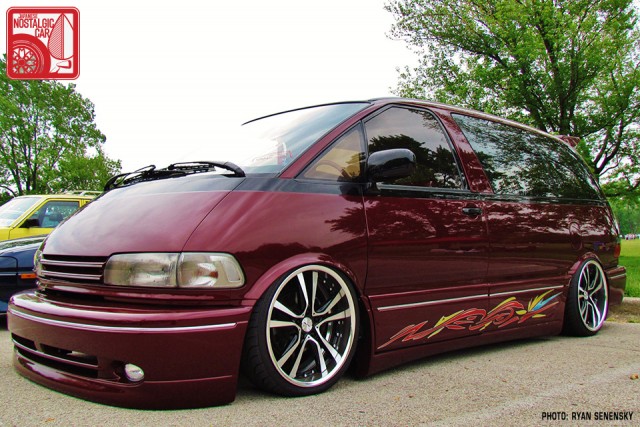 If wagons are too mainstream, there were a pair of VIP Previas which, as of this year, have entered the 25 Year Club. Both of these vans have spent time as backgrounds on my computer prior to this show and seeing these vans in the flesh was a treat, the execution here was unbelievable. I couldn’t track down the owner of the purple van for a picture but it had a wood floor and there was no shortage of high quality Japanese parts gracing these beans. I would have much preferred driving either these to Chicago over my CRX.

Last but not least are the Celicas, and they were not slacking in any way, from Felipe’s matte green RA22 to Douglas Arce’s nicely restored example with matching scale model. Not only were the chrome bumper cars well done, so were their plastic bumper brethren. Speaking to the owner of the silver-on-blue RA65 hatchback, it was daily driven and the condition considering its duty was fantastic. I really hope one day this car gets a full restoration because these chassis are too often overlooked when compared to the MA61 Celica Supra of the same generation. 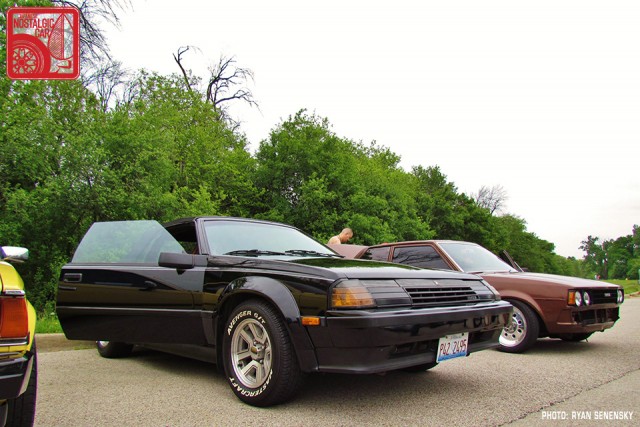 Not in need of any restoration was this beautiful RA65 GT-S convertible with P-Type flares. These are pretty uncommon in any condition much less one as immaculate as this example’s. 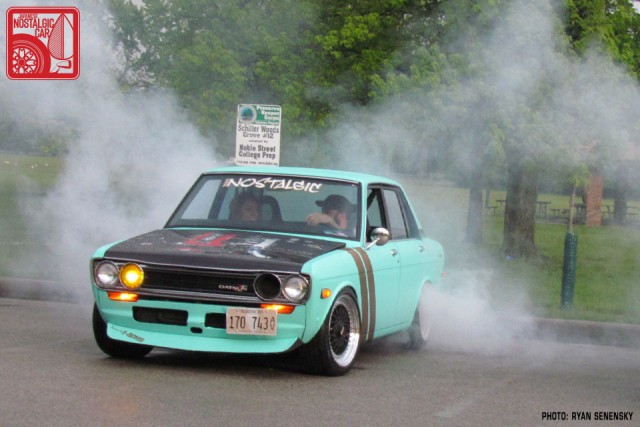 That concludes Part 01. Stay tuned for Part 02, which will contain all of the other marques in attendance, including an early 1987 EF chassis CRX, a very clean Hakosuka, and mopeds. To be continued…