This thing could have been the Nissan Z Proto 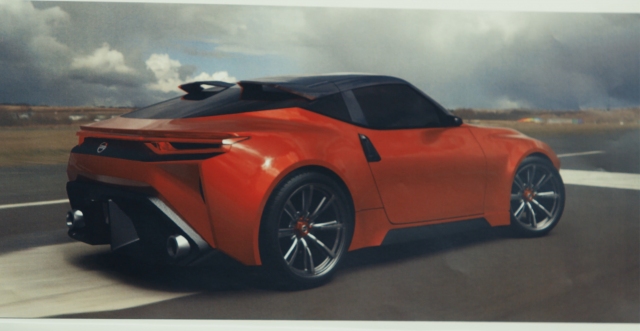 Okay, just one more thing about the Z Proto and we’ll shut up about it (for now). In some materials that Nissan shared, alternate designs for the Z Proto can be seen on the wall at the Nissan design studio in Atsugi, Japan. Some are good, others are… not. After seeing them, we’re glad that the Z Proto turned out the way it did.

To be fair, every car must go through this process. Not every early rendering is going to be a winner, and it’s up to the talent and knowledge of the design team to separate the wheat from the chaff. This red car, for example, is conceptually very different from the final product. Though it has a bit of S30 in the shape of the hood, most of it is very modern and angular. 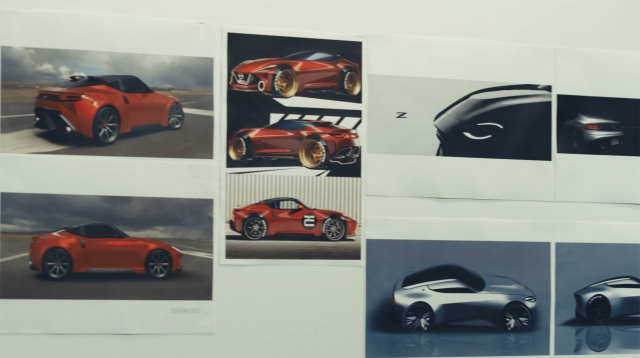 The rear view gets very aggressive with complex taillight shapes, a pair of bizarre spoilers mounted to the roof, and an in-your-face diffuser in the back. There’s a lot of intersecting surfaces between the C-pillar and exhaust. It’s en vogue for today, but probably not timeless. It also makes it glaringly clear just how much the concept is based on the 370Z, with its slab-sided doors and vertical handle. The RS-Watanabe-inspired wheels look kind of cool, if humongous.

A potential front view sketch of this car gets even more aggressive, taking several cues from the stance/SEMA/Rocket Bunny culture so prevalent today. There’s black fender flares with exposed fasteners, massive wheels with white-lettered tires, and foglamp housings the size of a circus cannon. We’re relieved the Z Proto didn’t go with those insectoid headlights and was given a reprieve from Nissan’s V-motion corporate grille. 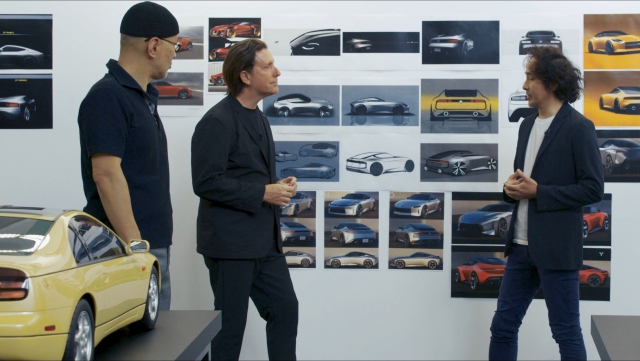 A trio of silver renderings along the bottom of the wall show more scuttled designs. The one on the left looks more Porsche 911 than Nissan Z. The center one appears to have a VW front end. The last one looks closer to the final product but none of them strikes the overall balance and cohesive look that the Z Proto does. The larger images on the right, depicting one silver and three red cars, seem way too aggressive and GT-R-like. 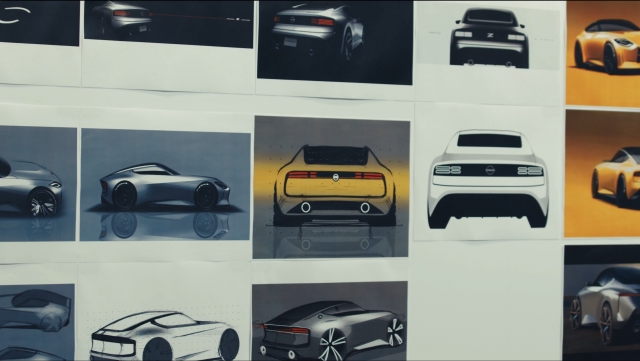 As expected, the ones int he center of the board look closest to the final Z Proto. There’s quite a few variations in the treatment of the rear, but all incorporate the Z32 taillights. The yellow one in the center looks quite good, but might not translate into a 1:1 scale car well. 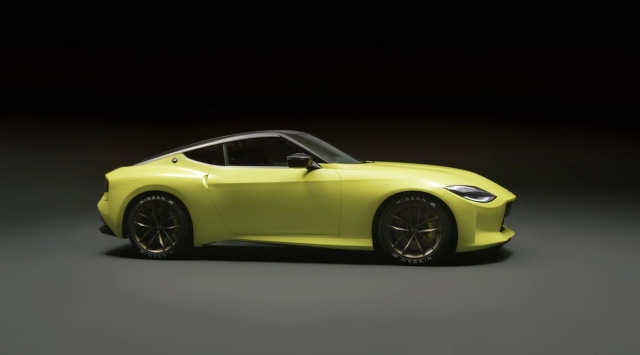 As Dave wrote last week, we think Nissan did a decent job with the Z Proto, especially given the chassis limitations. It manages to capture the essence of the Z while visually lightening the heft of the 370Z. It’s not busy and doesn’t have a bunch of fake vents or angry angles. Hopefully, it drives like it looks. Chief engineer Hiroshi Tamura has said shaving milliseconds off lap times is not the goal for the Z; Nissan has the GT-R for that. Instead, the Z will behave more like a dance partner, where driver engagement takes priority. The un-fussy design communicates that purpose well, and we look forward to getting a spin behind the wheel.