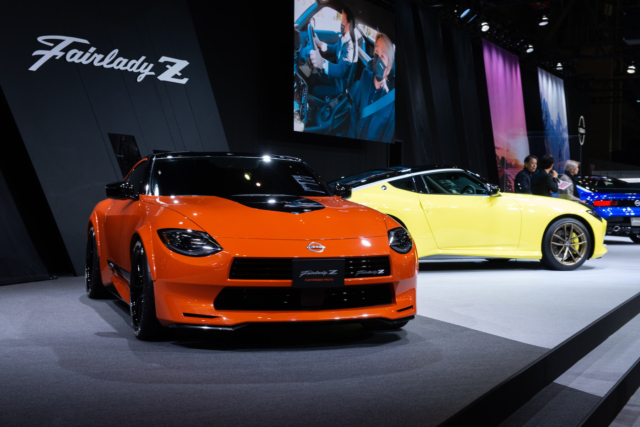 From the Tokyo Auto Salon comes some good news for fans of the new Z. Nissan showed again an orange concept based on the Fairlady Z Customized Proto from last year with minor tweaks. That’s because the split nose, which many fans preferred over the production Z’s large rectangular grille, has been given the go-ahead for production. 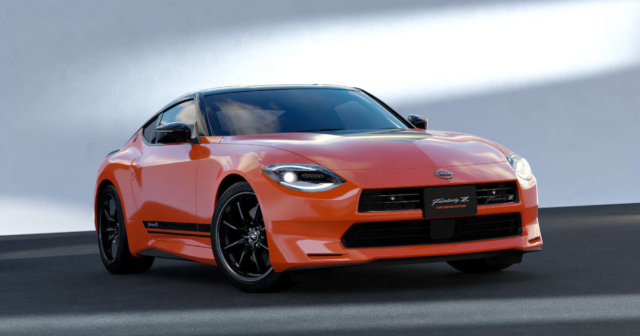 The production kit will not have the fender flares, but there’s still plenty of tributes to the S30 Fairlady Z432-R that inspired it. The front comes with a black lower lip reminiscent of the original’s chin spoiler. At the rear a black carbon fiber spoiler evokes the R’s black one. Black side and hood decals over orange paint also harken back to the Z432-R’s color scheme. Last but not least, the round “Z” logos on the C-pillars have been replaced by ones with a double chrome ring around them, a throwback to the S30.

Though the stock silver “katana blade” trim that traces the roofline from A- to C-pillar has been recolored, it’s now black. We preferred last year’s orange blade to because it looked more like the rain gutter of the S30 Z, but understandably it would be too costly for dealers be able to match it to the various factory colors and reinstall them.

Interestingly, the concept keeps some references to tuner culture. The wheels  resemble RS-Watanabe 8-spokes but measure 19 inches in diameter. The lower part of the new fascia has two ducts that are reminiscent of BRE chin spoilers as well.

Nissan will make this kit available as a dealer option starting in mid-2023. So far, it only seems destined for Japan, but that could change. At least it will be produced. Now hopefully that other orange Z from the Auto Salon isn’t.