Two Nissan concepts have been crushed at a scrapyard 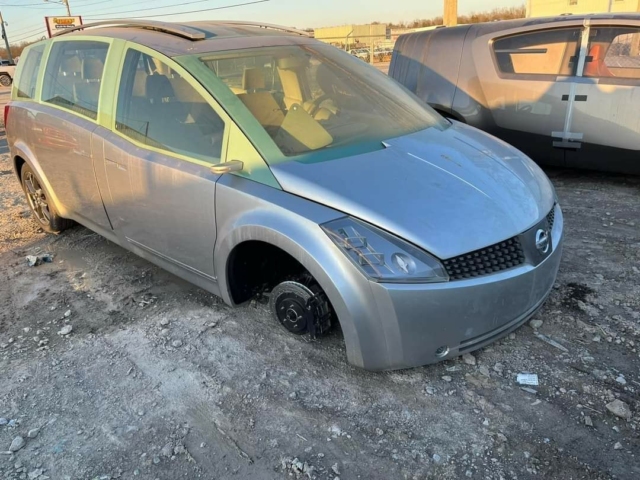 Once proudly displayed on auto show turntables with the eyes and cameras of global media trained on them, two Nissan concept cars have met their unceremonious ends in a Tennessee junkyard. Both were stars at Nissan’s booth at the North American International Auto Show in different years. The Nissan Quest Concept debuted on the Detroit stage in 2002, while the Nissan Bevel was unveiled in 2007. 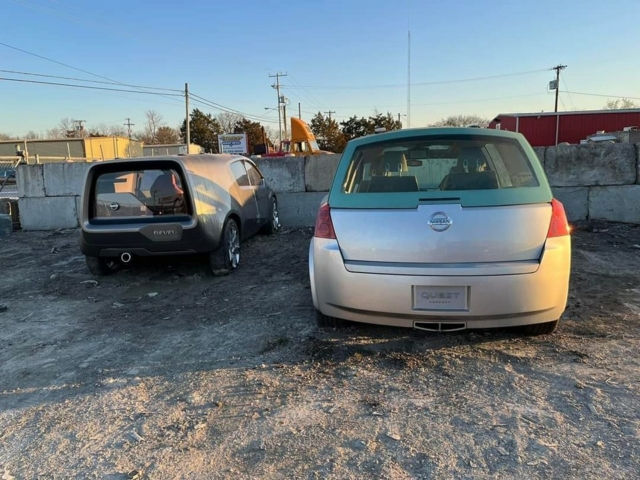 It’s widely known within the auto industry that car companies often crush their concepts. Many show cars can’t even move under their own power, and are displayed without running gear or interiors entirely. Even if they are fully functional, most are very fragile, as they weren’t designed for doing much more than sitting prettily on an indoor stage completely out of the elements.

Since they’re not production cars, they lack proper VINs and cannot be legally registered for road use. And honestly, even if a concept could be driven, it would pose far too great a liability for the carmaker if something were to go awry.

Despite all that, it still hurts a little to see these one-of-a-kind creations meet their demise in such an inelegant manner. The cars were found by a visitor to Express Scrap Metals near Nashville, Tennessee, where Nissan’s US headquarters and Heritage Collection are located. The Drive was able to contact the individual, Dayton Cooper, who spoke to employees of the recycling center. Apparently, they crush concept cars quite frequently, though didn’t mention a number or which automakers they belonged to. They also said Nissan requires video proof of the crushing to ensure nothing from the concepts makes it out onto production cars..

The article also quotes a Nissan spokesperson saying that the cars had degraded to the point that maintenance proved impossible. “We kept them around as long as we could,” they said. 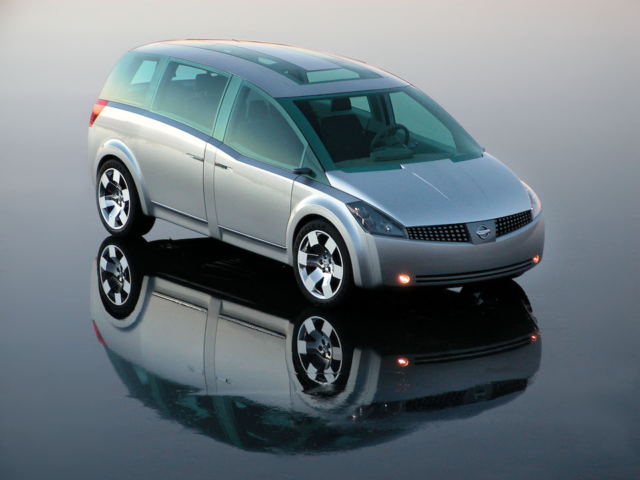 In its heyday, the Nissan Quest was quite a bold design, especially for a minivan. It had a number of unconventional design cues, including massive green-tinted glass panes that overlaid the pillars. The glass had milled edges and were beveled at about a 45-degree angle. The goal, according to lead designer Tom Semple, was to give it an architectural feel. With its U-shaped skylight and arched beltline, we’d say that mission was accomplished.

The interior was even more far out. With its felt upholstery, 16-inch center display, and neutral tones, it looked like the bridge of the Enterprise. Amazingly, much of the overall design made it into the production version, weird center stack and all.

Designers wanted to maximize space by pushing the 20-inch wheels out to the corners and giving them pronounced wheel arches. We even see some elements of the Nissan S-Cargo in there, albeit in much larger scale. Sadly, the exterior was toned down significantly for production, but it’s still one of the more unorthodox vans out there in terms of styling. 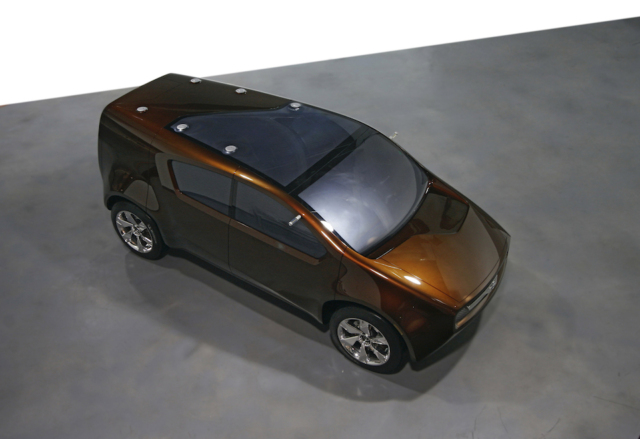 The Bevel was even more wild, sporting, most notably, an asymmetric body. The driver’s side had one long door for access, with a panel-van style rear half. The passenger’s side, on the other hand, had two doors arranged suicide-style, and far more glass. The panoramic roof, too, was asymmetric, which was great. The world needs more asymmetric cars. Nissan is one of the few who dared make them. 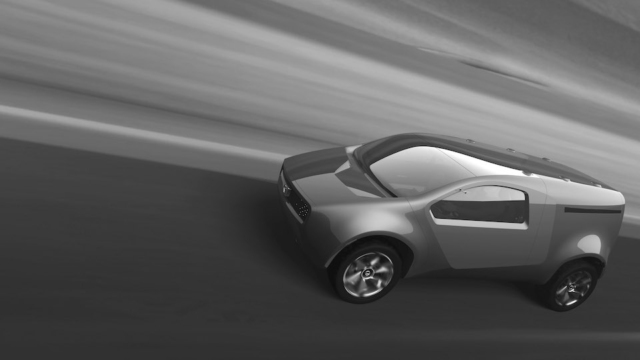 Powered by a V6 hybrid-electric powertrain, the Bevel’s target demographic was, according to Nissan, “male empty-nesters actively engaged in hobbies, recreation and community service.” Size-wise, it was larger than a Murano but smaller than a Quest. A clamshell rear hatch opened to reveal a workbench, and work area even had a 110-volt outlet good enough for power tools.

Unfortunately, Nissan themselves don’t even seem to have good photos of the Bevel. Their assets appear to be limited to two photos and a handful of renders. None show the interior. That makes the snapshots taken in the junkyard likely the last we’ll ever see of the Bevel’s cabin. 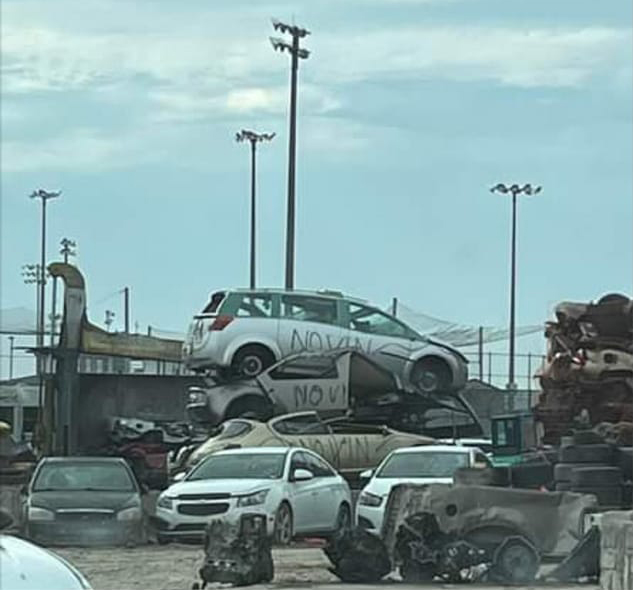 That’s because, over the weekend, it appears the junkyard made good on its promise to crush the cars. Despite a Facebook group‘s best efforts to save the Bezel, both vehicles were crushed along with a third concept that hadn’t been parked by the Quest and Bevel. That car has been identified as the 1999 NCS concept. 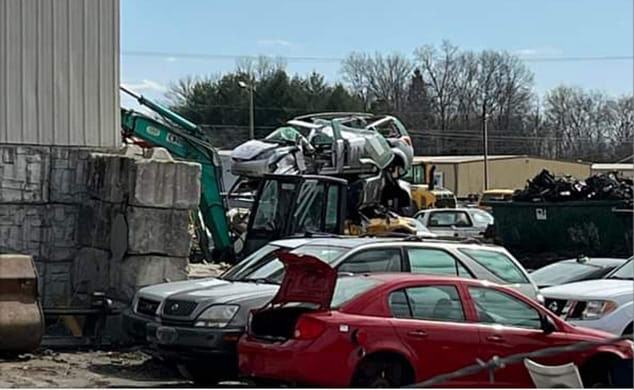 Car companies create several concepts every year — for all the major international auto shows, plus aftermarket shows like the Tokyo Auto Salon and SEMA, and sometimes classic events like Monterey Car Week. Add to that all the race cars and significant production models and it’s a collection that can easily get out of hand.

Typically, automakers decide to get rid of a car when they can’t foresee a need to use it again, ever. Not even for marketing or display purposes. Usually that means it sees these cars as evolutionary dead ends. Nissan will always keep a 240Z or the first Q45, but the Bevel, or its general concepts, never amounted to a production car. 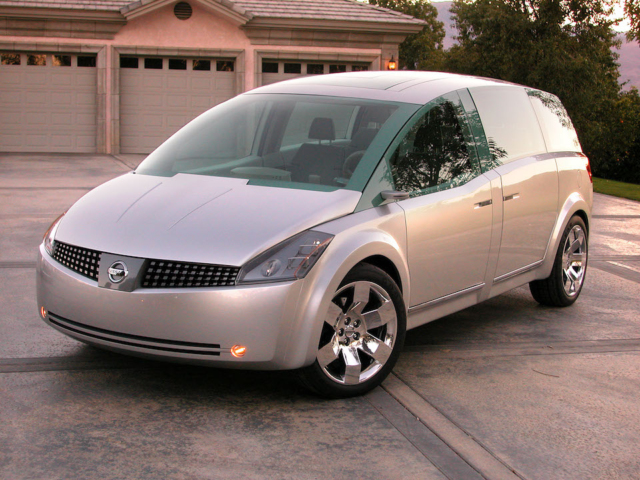 The Quest is a bit more curious, as its disposal indicates Nissan will probably not continue or revive the model name again. In fact, it likely signals Nissan’s intention to bow out of the US minivan business altogether, so there will never be a need to show the concept in, say, a lineup of classic vans when they launch a 2025 model.

Logically it makes sense for Nissan to crush these cars, but the irreversibility of the action still makes us recoil. Yeah, most people may not have thought about either of these cars for years. Still, it’s sad to see them dispatched with the same level of disregard as if crushing a Versa rental. RIP, Bevel and Quest.