MOTORSPORT: Nissan pays tribute to the R32 GT-R at Bathurst 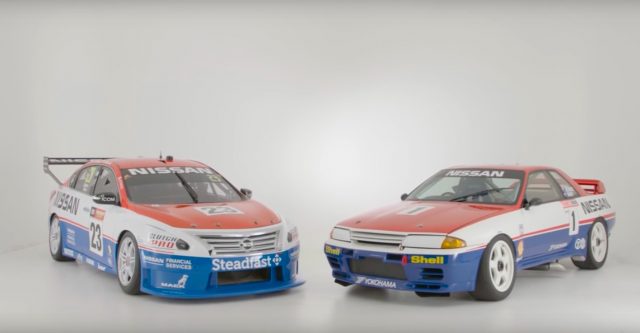 Nissan Australia does some pretty cool stuff Down Undah, things we can only dream of in the States. For example, they take the Altima racing, but instead of cheesy stunts punking normal schlubs, the Aussies turn them into actual race cars by converting them to RWD and shoving 668-horsepower 5.6-liter V8s under the bonnet. Then they put vintage Skyline liveries on them.

Unlike the US, Skylines have had a long racing history in Australia. Twenty-five years ago, the R32 Skyline GT-R dominated Oz’s toughest and most famous race, the Bathurst 1000. The car, driven by Mark Skaife and Jim Richards, was decked out in a red, white and blue livery and won, upending a race that had for most of its life been ruled by either Ford or Holden. Godzilla was so dominant that after two straight wins, the GT-R was banned.

The story of the Skyline GT-R at Bathurst is one of the most famous motorsports tales in Australia (especially its 1992 win, but we’ll save that for a different day). The yarn has even made its way to Germany, where the local Nissan ad agency even filmed a dramatic reenactment of the press conference in which the car was banned.

Last weekend, Nissan revived the Skyline GT-R’s 1991 livery on one of its V8 Altimas that ran at the 2016 Bathurst 1000. What’s especially cool was that prior to the race, one of the V8 Altima drivers, Michael Caruso, had the opportunity to sit down with Mark Skaife to talk about his time behind the wheel of the R32 at the very same race 25 years ago. It’s definitely worth a watch.

What’s even cooler, though, is that this isn’t the first time Nissan Australia has brought back an old livery for its modern race cars. In 2014, Caruso’s Altima donned the warpaint of George Fury’s 1984 Bluebird, and in 2015 the Altima wore the colors of Jim Richards’ HR31 Skyline in honor of 25 years since Nissan’s first Australian Touring Car Championship title.

Classic liveries can evoke so much history with a few simple colors. Skaife himself said it best: “I think it’s a great connection for Michael to run this livery as a consequence of the GT-R and the way the Nissan Motor Company has been long-term supporters of car racing in Australia. I love the look of it and I’m sure ‘Richo’ [Jim Richards] will have a tear in his eye also.”

10 Responses to MOTORSPORT: Nissan pays tribute to the R32 GT-R at Bathurst