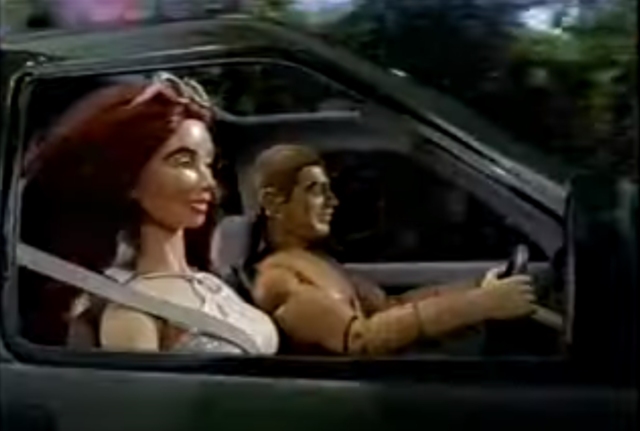 Last week we asked what your favorite car commercials were. In any list like that, the 1996 Nissan spot “Toys” was bound to show up. In it, a GI Joe-esque action figure comes to life, drives a Nissan 300ZX remote control car across a house to rescue a Barbie-like doll from her lame boyfriend. Everyone who loves cars knows it, but far fewer know that there was a sequel, where Joe drives a Nissan Pathfinder.

First, if you somehow missed the original “Toys” because you were kidnapped by aliens for the last 25 years and just returned, take a look at the video above. You’ll need to see it to understand why the sequel was scarcely viewed. Also, welcome back.

Shortly after the commercial aired, Mattel sued Nissan because the figures in the ad resembled Barbie and Ken too much. The lawsuit alleged that the spot caused “‘irreparable injury to Mattel’s name, business reputation and goodwill” according to a 1997 story in the New York Times. Even though Barbie or GI Joe were never mentioned by name, the charge against Nissan claimed that they didn’t have to, because everyone knew those were the characters they were referencing.

As a result, the sequel, “Toys 2” ran for a much shorter time on air. The follow-up had pretty much the same premise — The not-Joe toy rises from a sandbox, commandeers a then-new second-generation Pathfinder, and takes off to save the not-Barbie doll from her hapless boyfriend not-Ken. Except, this time it takes place in a backyard, with a new set of obstacles, instead of inside a house.

It’s fun to see these commercials now, but at the time there was a lot in the culture fueling the popularity of these ads. Pixar’s first movie, Toy Story, had just debuted the year prior and became a runaway blockbuster. The same year the Nissan ads came out, so did the song “Barbie Girl” by Aqua. Mattel sued the band too, but the suit was dismissed. Judges decided that the song fell under parody protection. Twelve years later, in 2009, Mattel had a change of heart and actually used the song in a Barbie ad.

As for Nissan, eventually the lawsuit was settled out of court and Mattel and Nissan clearly enjoy a good relationship. But if Barbie can forgive Aqua, it seems a bright red Nissan 300ZX might be ripe for a revival as a remote control car by Hot Wheels.

permalink.
This post is filed under: cm and
tagged: nissan, pathfinder.